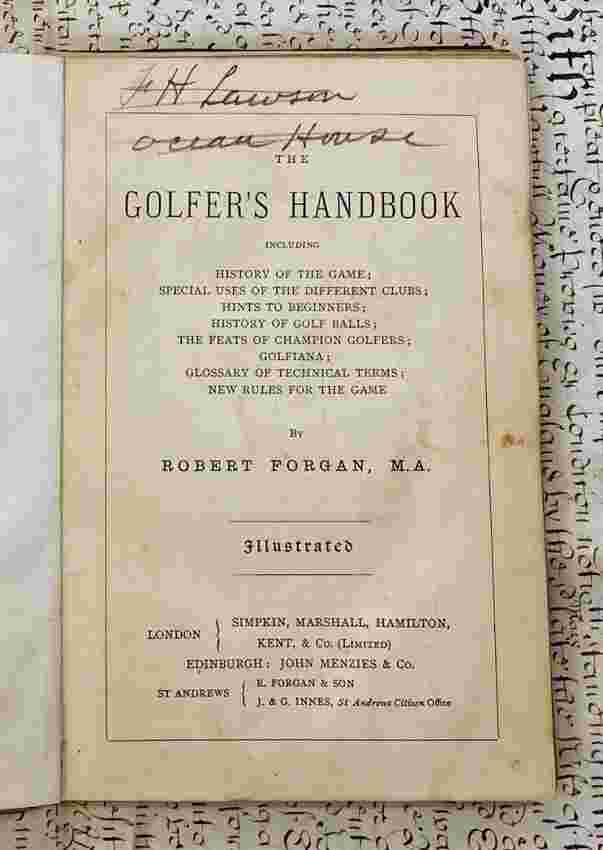 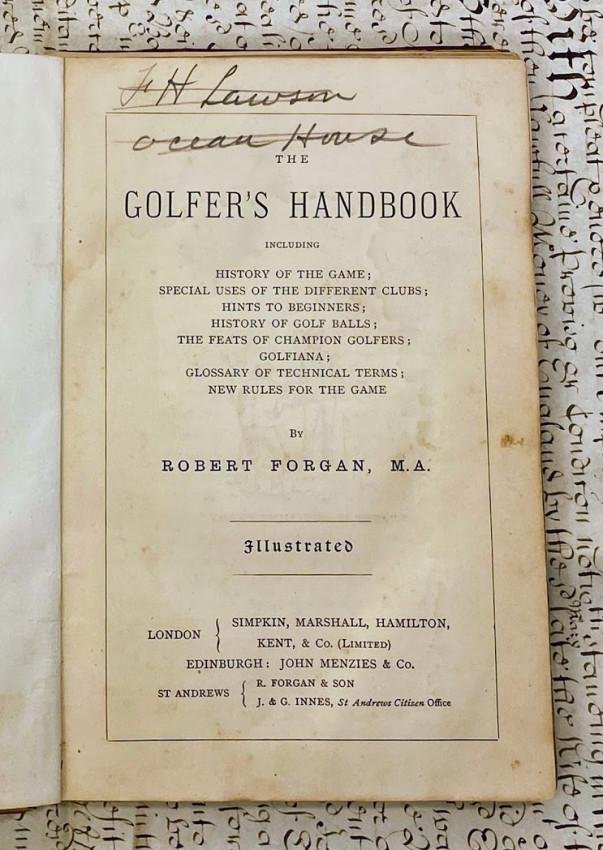 A noble relic, standing as mute testimony to the foundation of one the oldest and most beautiful Golf Clubs in the United States: from the library of one of the founders of the club, apparently donated by him to the Club and used as an aide memoire when the local Club Rules of the Game were being considered.

The Club has suffered damage from various hurricanes over the years: it is interesting to speculate that the obvious signs of old water damage to this book may have been as a result of one of these events – like the club, this book is a proud tenacious survivor.

Frank H. Lawson is one of the 15 “founding fathers” who agreed to band together to “form a corporation under the name of The Misquamicut Golf Club”. The Club was founded in July 1895, but, interestingly, the agreement does not seem to have been registered with the State until 5th February 1896.Lawson was staying at the famous Ocean House resort hotel when he acquired this work, but later lived in a house on Watch Hill. The National Register of Historic Places nomination form (p.15) for Watch Hill Historic District records that ‘Cloverly’, 101 Misquamicut Rd., built in 1900,  was ‘later occupied by Frank Lawson’.

“Forgan's Special Edition" seems to be an issue or issues published in-between the fifth and sixth editions. The fourth and fifth editions were enlarged to include a chapter on the history of golf ball making which is present here. Also of note, the last ‘Open’ result on page 42 is 1893. There is at least one other issue of “Forgan’s Special Edition” (where the last Open result is for 1892). See Donovan & Murdoch 1250; Murdoch 260.

Lakeville, CT, USA
34 Followers
Get notifications from your favorite auctioneers.
As Seen On
Shop With Confidence
Since 2002, LiveAuctioneers has made exceptional items available for safe purchase in secure online auctions.
Popular Searches
Artists & Creators
Brands
Style Periods
Origins
Company
Winning
Selling
Â© 2002-2020 LiveAuctioneers. All Rights Reserved.Cookie PolicyTerms & ConditionsPrivacy Policy
This site is protected by reCAPTCHA and the Google Terms of Service and Privacy Policy apply.
BACK TO TOP