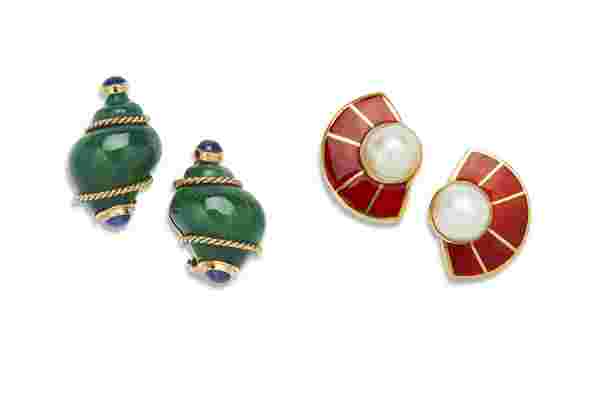 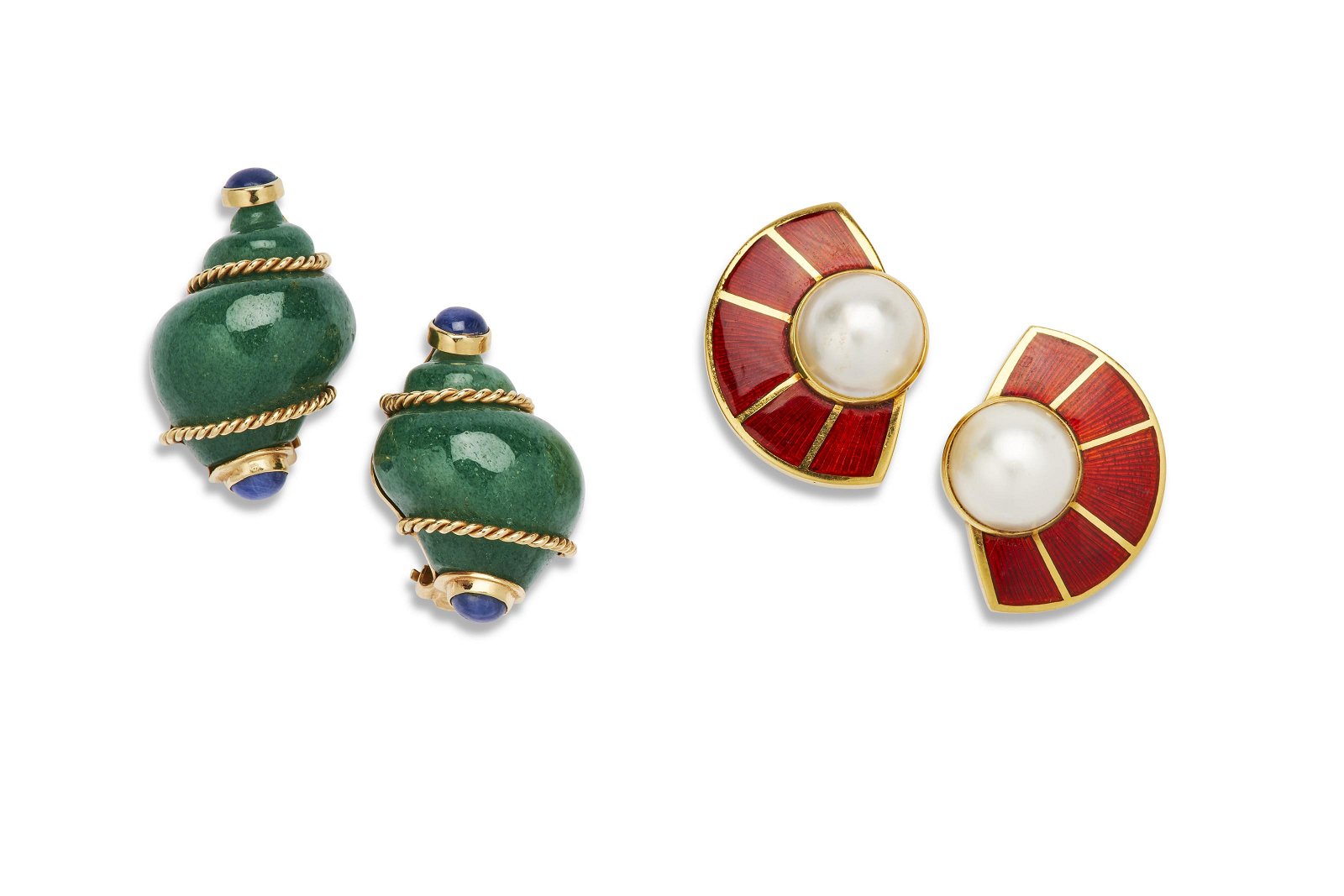 TWO PAIRS OF EAR CLIPS
ONE BY SEAMAN SCHEPPS, LAST QUARTER 20TH CENTURY; THE OTHER BY LEO DE VROOMEN, LONDON, 1987
The first designed as a pair of shells carved of aventurine quartz mounted in yellow gold and capped by cabochon sapphires, signed P.S.V. of Seaman Schepps, the clip marked 14K; the second designed as two fans of red enamel mounted in yellow gold centering a mabe pearl, signed De Vroomen and with London hallmarks
1 3/8 in. (3.5 cm.) long, the first; 1 1/4 in. (3.2 cm.) long, the second

PROPERTY FROM THE COLLECTION OF MARION OATES CHARLES

"Christie’s is honored to present property from the collection of Marison Oates Charles, Lots 1 through 97 These works that include European and English furniture, silver, ceramics and fine art as well as jewelry by makers Verdura, Henry Dunay and Seaman Schepps offer a glimpse into the eclectic, but always elegant taste of this American original.
Marion Oates Charles, known to most as “Oatsie”, was born on September 29, 1919 in Montgomery, Alabama. As a young woman, her beauty and quick wit were her trademarks. Though a granddaughter of a Civil War colonel, congressman, and governor, Oatsie broadened her horizons to attend boarding school in pre-war Europe, debut in New York and eventually become one of the most celebrated hostesses in Washington, D.C.
In 1942, Oatsie married Thomas Leiter and they moved into an apartment in Washington’s Dupont Circle. She immersed herself in a formidable social set that included politicians, business tycoons, and socialites alike. During the decades she spent in her R Street home, Oatsie counted Katharine Graham, Nancy Reagan, Bill Blass, Truman Capote, and Gore Vidal among her close friends. Perhaps most notably, she socialized with the James Bond series’ author Ian Fleming and is credited with recommending the books to another good friend, then-Senator John F. Kennedy, while he recuperated from back surgery. The subsequent inclusion of Fleming’s novels in a publication of the newly elected President’s reading list projected the James Bond character to national attention and helped launch the Bond franchise that continues today.
In 1952, Oatsie and Thomas Leiter purchased the Newport cottage ‘Land’s End’, whose previous owners included novelist Edith Wharton. In 1957, Oatsie sold ‘Land’s End’ to move into its gardener’s cottage ‘The Whim’. In Newport, she devoted herself to philanthropic efforts. Doris Duke, a neighbor and good friend, appointed Oatsie to the Board of Directors of her foundation. Oatsie also served as President of the Board of Trustees of the Newport Restoration Foundation. On December 5, 2018, in her beloved home ‘The Whim’, Oatsie Charles died, leaving an indelible legacy as one of the last great doyennes of American society. She was survived by her daughter, three grandchildren, and eight great-grandchildren."

New York, NY, USA
1,501 Followers
Auction Curated By:
Bliss Summers
Co-Head of Sale, The Collector and Head of Sale, Interiors
Get notifications from your favorite auctioneers.
As Seen On
Shop With Confidence
Since 2002, LiveAuctioneers has made exceptional items available for safe purchase in secure online auctions.
Popular Searches
Artists & Creators
Brands
Style Periods
Origins
Company
Winning
Selling
Â© 2002-2020 LiveAuctioneers. All Rights Reserved.Cookie PolicyTerms & ConditionsPrivacy Policy
This site is protected by reCAPTCHA and the Google Terms of Service and Privacy Policy apply.
BACK TO TOP