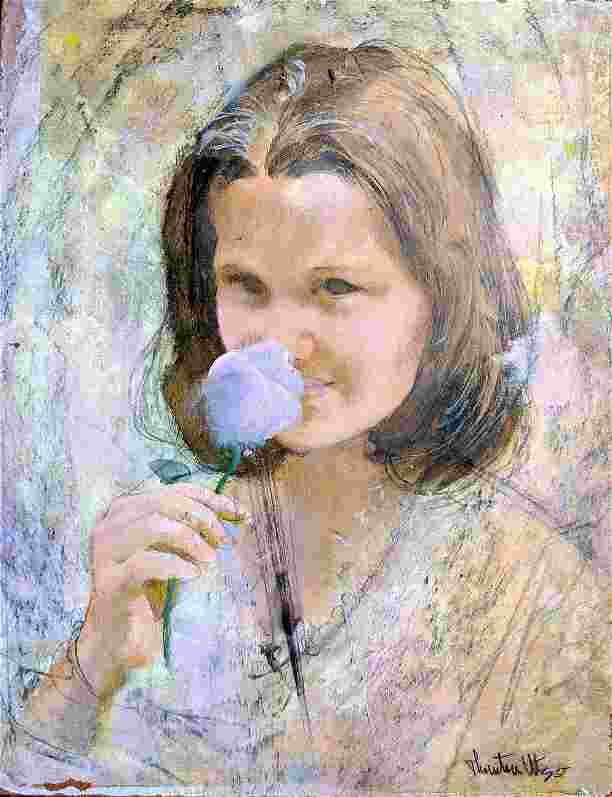 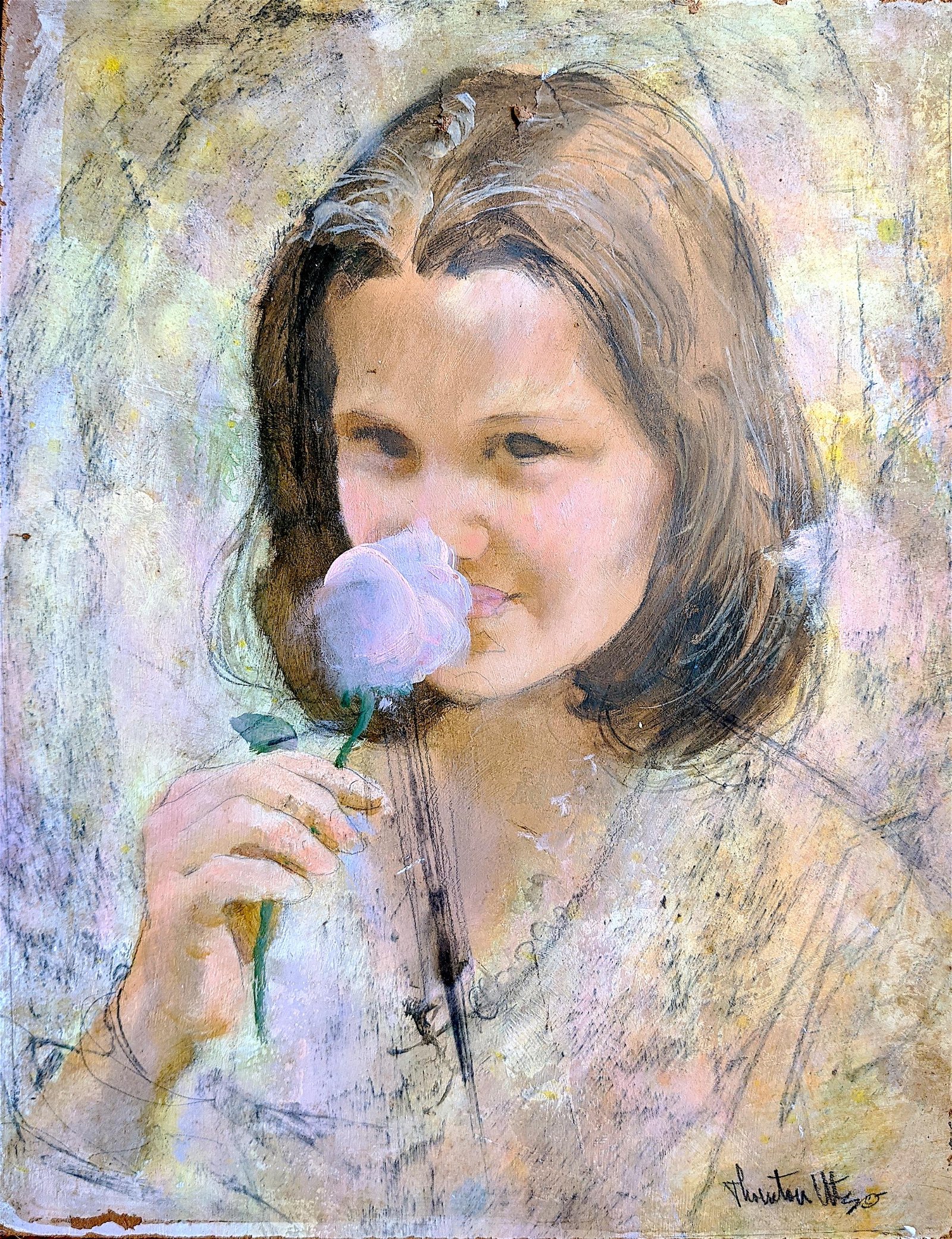 Thornton Robyn Utz, a Southerner, was born in Memphis, Tennessee in 1914 where his father worked as a craftsman in horse-drawn carriage trimming until he moved over to automobile upholstery. From a very young age, Thornton Utz began drawing and illustrating without any professional training. He made his own comic strips to pass out to schoolmates. By high school, Utz had received encouragement from his teachers to pursue a career in the arts. His passion for art and illustration would build into a defining style that heavily influenced advertising and illustrating throughout the 1950s and 1960s.

UtzÕs work was so popular he received steady work before even having graduated from Memphis Technical. Utz was quick to make friends throughout his life. At Memphis Technical, he met a young man by the name of Euclid Shook, who became his artistic partner for several years. The two worked semi-professionally on advertisements and boards for fairs and carnivals across the state. They graduated from high school in 1933 and together enrolled in The Academy of Art in Chicago.

While studying art in Chicago, Utz shopped his skills around various advertising firms and print shops looking for work. His time in Chicago helped form his defining illustrative style. Looking back, Utz believed the time was wasted, saying, ÒI donÕt think I learned much that year- except that I would never learn art in art school.Ó Much to the artistÕs own chagrin, his style developed most in Chicago because of his schooling and the influence of his relationships. The most important artistic relationships he developed were those of Coby Whitmore and Ben Stahl. They all later became prominent members of The Chicago Gang of illustrators, friends who worked together to build a synonymous style for illustration. In Chicago, Utz met his wife, Louise Prohaska, through Ben Stahl. The two fell in love with one another over the course of a long period, eventually marrying on March 6th, 1940.

Utz received his first major illustration contracts designing color page art for Bell Airacobra, leading to his discovery by The Saturday Evening Post for an illustration and agent signing in 1944. Utz quickly settled his family just outside of New York City in Westport, Connecticut where he could work for large publications and advertising firms from home while helping to raise two daughters and a son. Utz was fascinated by the WPA Americana style and often chose to depict suburban families living their everyday lives. Some of his favorite artistic choices involved objects of technology and movement such as buses, trains, and cars. The idea of mass transportation and its commentary on the speed of the times fascinated the southern boy whose father had to shift from working on horse carriages to automobiles.

By the 1950s, Thornton Utz was using the interactions in his life to reach out to the rest of the country through art. His illustrations of American families going to work, cooking, cleaning, mowing the yard, and completing other chores made for a strong connection to the sensibilities of the time. His portrayals of the successes and humors of American stereotypes resonated with the countryÕs citizens in the post-war boom economy. His work made him one of the most popular illustrators in post-war America, fetching commissions for forty-five Saturday Evening Post covers during the decade. (N.C. Wyeth, Andrew Wyeth, Ellen Pyle, J.C. Leyendecker and of course Norman Rockwell all produced covers for the SEP).

Thornton Robyn Utz was an American illustrator, cartographer and cartoonist. Today he is best remembered for his graphic work in The Saturday Evening Post during the 1940s and 1950s. Most of his cartoons featured romanticized scenes of suburban life in the United States, often involving transportation. His work is interesting for comics fans and historians too, because his gags are often told in three narrative sequences.

Utz was part of The Chicago Gang, a group of illustrators who worked in a minimalist style. In 1939 he created a biographical text comic about the life of Norwegian composer Edvard Grieg, of 'Peer Gynt' fame. The comic was written by Anne Healy Marks and appeared in Portuguese translation in the Brazilian magazine O Tico-Tico. It is unknown in which U.S. magazine this particular cartoon appeared previously?

Today Utz is best known for his graphic contributions to The Saturday Evening Post, which took off in 1944. He created many cartoons for them, 45 of which were used on the cover. Utz' style is somewhat comparable to Norman Rockwell. Just like him most of his illustrations depict everyday life in the American suburbs. Like most media from the 1940s and 1950s the imagery is happy, romanticized and carefree. Another thing that set him apart was the use of sequences on his magazine covers. Most cartoonists who used this comic strip format were usually relegated inside the issue's pages.

Apart from the Saturday Evening Post Utz also created advertising illustrations for multinationals like Ford, General Electric and Coca-Cola. Later in his career he founded a cartography company, but sold his business to spent the final years of his life as a portrait painter. Two of his most famous clients were U.S. President Jimmy Carter and Princess Grace of Monaco. Thornton Utz passed away in 1999 at the age of 85.

This lot is located in Boca Raton, Fl and its shipment will be made directly by Artelisted. Shipping insurance is the responsibility of the buyer. Ask us if you want to add insurance cost. Note that if there is loss or damage due to bad handling by the transporter, this loss will be assumed only by the buyer. Enquires are welcome, do not hesitate to contact us at your convenience, we are looking to providing you with an excellent service.

The lots offered in this sale have been selected among many options and always thinking of offering excellent opportunities to the customers. The vast majority are original of the time (unless otherwise indicated). Due to its originality and age, some items may accept a restoration/conservation (at the option of the buyer). We have included images showing its current condition. Do not hesitate to contact us if you have any questions.

712 Followers
Get notifications from your favorite auctioneers.
As Seen On
Shop With Confidence
Since 2002, LiveAuctioneers has made exceptional items available for safe purchase in secure online auctions.
Popular Searches
Artists & Creators
Brands
Style Periods
Origins
Company
Winning
Selling
Â© 2002-2020 LiveAuctioneers. All Rights Reserved.Cookie PolicyTerms & ConditionsPrivacy Policy
This site is protected by reCAPTCHA and the Google Terms of Service and Privacy Policy apply.
BACK TO TOP