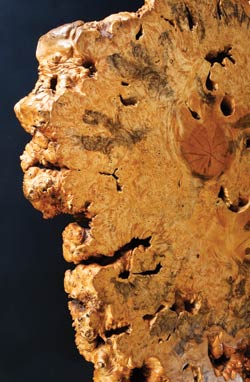 This stunning coffee table with free-edge buckeye burl top with natural occlusions and walnut base was made in 1981 and retained a copy of Nakashima’s original drawing. It brought a record $288,000 at a Sollo Rago sale on April 21, 2007. Image courtesy Sollo Rago Auctions.

George Nakashima was an interpreter of trees, listening to the voice of nature and translating wood and bark into timeless furniture.

That’s part of the allure of Nakashima (1905-1990), the iconic artisan whose sinuous, realistic studies attract a growing crop of admirers.

“One of the enduring qualities of his work is his ability to communicate his love of wood to other people,” says Robert Aibel, who sells Nakashima furniture at Moderne Gallery in Philadelphia. “He made furniture that people live with – the dining room table where you eat, the rocker where you nurse your baby.” Nakashima was the most prolific and best-known figure of the American Studio Furniture Movement (1940-1990), an artistic renaissance born in the City of Brotherly Love that promoted craft as an antidote to mass-produced modern furniture. Nakashima’s workshop in nearby New Hope, Pa., produced 25,000 pieces ranging from two-legged Conoid chairs to the massive Peace Table at the Cathedral of John the Divine in Manhattan. Matt Freeman, who grew up a few miles from the studio, was raised with Nakashima furniture his parents used and enjoyed every day. He remembers the list of pieces getting taller as he did, eventually including a dining room table and chairs, end tables, cabinets and shelves.

“My parents weren’t overly protective about the furniture, but all the pieces are in pristine shape today, 40 years later,” he said. “Even as kids we had this quiet respect for the way they were made … They’d just sort of sit there quietly glowing. We’d set down our soda glasses and sticky lollipops somewhere else, not on the Nakashima.”

Like children, each tree has its own personality. Nakashima was the first to embrace the knotholes, fissures and splits in wood as wondrous expressions of nature rather than imperfections. While most furniture makers discard the thin, irregular ends of slabs, Nakashima integrated them into his designs. Known as “free edges,” those elements are factors in determining the value of a piece. Basically, the more free edges, the greater the value.

END_OF_DOCUMENT_TOKEN_TO_BE_REPLACED 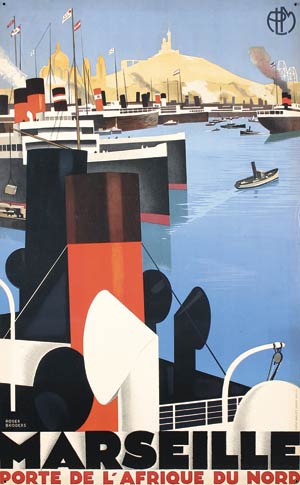 This image of the port of Marseille was produced in 1929 by Roger Broders. Image courtesy Poster Connection.

They look chic with spare, contemporary interiors. They complement Mid-century industrial styles. And they fit beautifully, of course, with furnishings from the 1920s and ’30s.

Art Deco posters make a 20th-century statement that has resonated ever since their creation.

They are also in great demand among collectors, and their values have soared since the 1990s. In spite of this upsurge, there are still relatively affordable Deco posters that cover a range of themes and subjects in striking, brilliant designs.

Joerg and Joern Weigelt are father and son poster dealers who have shops on either side of the Western world. Both have a strong appreciation for the Deco style.

The family penchant for posters began in 1978 at a flea market, Joerg Weigelt explained, where he found a postcard, dated 1910, of a Ludwig Hohlwein poster. “This was our first contact with posters – a small poster reproduced on a postcard. After that, we started looking for posters in their full sizes.”

In 1982 he opened Galerie fur Gebrauchsgraphik (Gallery for Commercial Art) in Hannover, Germany. Back then, “people wanted artists like Franz von Stuck and Alphonse Mucha, and any really old posters. But there were some forward-looking collectors and dealers who were already turning their attention to the late 1910s, 1920s and 1930s,” according to Joerg.

By the early 1990s, historism, which imitated styles from older periods, and Art Nouveau posters were out of reach for most collectors. “So people had no choice but to look for new areas of interest,” and they turned to the 1920s, Joerg said.