LA PLATA, Md. (AP) – It was spirits — the alcoholic kind, not ghosts — that led archaeologists to a 17th-century courthouse.

Around the 1670s, it seems, councilmen and judges spent a fair amount of their time guzzling liquor. Remnants of their wine bottles and beer tankards are, therefore, easy to find.

It was pieces of those stone and glass vessels that led a team of archaeologists to find the original Charles County courthouse, the oldest government building in Maryland whose remnants could never be located – until now.
“Oh, they drank at night when they were sitting around talking about the day, they drank on breaks and they might even have been doing it when they were in court,” said Julia King. She’s an anthropology professor at St. Mary’s College of Maryland and she led a group of students in searching for the courthouse. “You can see pieces of their glasses everywhere you turn.”

END_OF_DOCUMENT_TOKEN_TO_BE_REPLACED 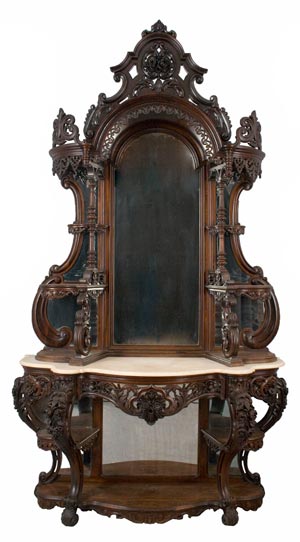 PITTSFIELD, Mass. – More than 300 lots of outstanding, fresh-to- market merchandise in a broad array of categories will be offered on Saturday, Sept. 27 at Fontaine’s Auction Gallery in Pittsfield.

“This auction will feature hundreds of wonderful items from prominent area estates,” said John Fontaine of Fontaine’s Auction Gallery, “and it’s just one of four great sales planned for the rest of the year.” The other sales are the Henry Brownell Estate Auction (Saturday, Oct. 18); an Important Antique Clock Auction (Saturday, Nov. 8); and a Discovery Auction (Saturday, Dec.8).

A rare and beautiful Louis Comfort Tiffany carved walnut corner armchair in very good and clean condition, with original finish. The top-crest rail is heavily carved, with a panel showing acorns and oak leaves. The chair has a nice tapestry seat, with padded arms and back (est. $50,000-$75,000).

END_OF_DOCUMENT_TOKEN_TO_BE_REPLACED 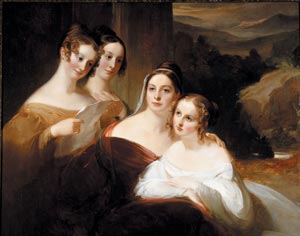 LOUISVILLE, Ky. – The Speed Art Museum turns its focus to American art in two newly launched affinity exhibits: Life, Liberty and the Pursuit of Happiness, which features American art from the Yale University Art Gallery Collection; and American Art at the Speed.

Life, Liberty and the Pursuit of Happiness, which opened on Sept. 7, includes more than 200 paintings, drawings, prints, photographs, furniture, silver, and ceramics from Yale University’s renowned collection of 18th- and 19th-century American fine and decorative arts. Considered to be one of the finest American collections in the world, Yale’s treasures include paintings by such artistic masters as John Singleton Copley, history painter John Trumbull, portraitist Charles Willson Peale, genre painter William Sidney Mount, landscapists Albert Bierstadt and Frederic Church, Thomas Eakins, Winslow Homer, and many others. Decorative arts highlights include silver crafted by Paul Revere, a gold sword owned by 19th-century naval hero Stephen Decatur, beautiful classically inspired settees and other furniture, and much more. This is the first time Yale’s key American works have traveled outside of New Haven for an exhibition. The collection will be displayed through Jan. 4 at the Speed Art Museum.

In conjunction with Life Liberty and the Pursuit of Happiness: American Art from the Yale University Art Gallery, the Speed presents American Art at the Speed, featuring paintings, works on paper, photographs, sculpture, and decorative arts from the museum’s American and Kentucky collections.  The exhibition will run through May 2009.

END_OF_DOCUMENT_TOKEN_TO_BE_REPLACED

https://www.liveauctioneers.com/news/wp-content/uploads/2008/09/2008_0915_speed_AmericanArtExhibitWalshSisters.jpg 236 300 Catherine Saunders-Watson https://www.liveauctioneers.com/news/wp-content/uploads/2019/12/ACN-logo-2019-2.png Catherine Saunders-Watson2008-09-15 16:08:482008-09-15 16:08:48Life, Liberty and the Pursuit of Happiness: Speed Museum’s American Art from Yale
NEW YORK (AP) – Wall Street bond trader Bill Gross will auction off his British Empire stamp collection for an expected $1.5 million to benefit a Columbia University project that delivers seeds and fertilizer to Africa, Spink Shreves Galleries said Wednesday.
This is the second time that the proceeds from the sale of Gross’ philatelic collection will go to the Millennium Villages Project at the Earth Institute at Columbia University. In May, his Scandinavian stamp collection was auctioned for $1.6 million.
The Oct. 3 auction will again be held at Spink Shreves Galleries in New York City. The 138 stamps include one-of-a-kind canceled stamps and envelopes.
“There are classic rarities from such places as Australia, the British West Indies, the Cape of Good Hope, Cyprus, Gibraltar, India, Malta, and Mauritius ranging in value from a few hundred dollars to a hundred-thousand dollars each,” said auction house president, Charles Shreve.
Gross and his wife, Sue, said in a statement that they again chose the Millennium Villages Project because it helps “some of the poorest people throughout the African continent escape from extreme poverty.”
Among the highlights is an 1849 Indigo Blue, two-pence stamp of Mauritius, estimated to bring up to $100,000. A trial printing of an 1863 Cape of Good Hope triangular-shaped red, one-penny stamp is expected to sell for more than $80,000.
Last year, Gross raised $9.2 million for another charity, Doctors Without Borders, with the sale of his early Great Britain stamps.
Gross, a resident of Laguna Beach, Calif., is the founder and co-chief executive of bond manager Pimco of Newport Beach, Calif.
Copyright 2008 Associated Press. All rights reserved. This material may not be published, broadcast, rewritten, or redistributed.
AP-ES-09-10-08 1254EDT
https://www.liveauctioneers.com/news/wp-content/uploads/2019/12/ACN-logo-2019-2.png 0 0 Catherine Saunders-Watson https://www.liveauctioneers.com/news/wp-content/uploads/2019/12/ACN-logo-2019-2.png Catherine Saunders-Watson2008-09-15 14:25:132008-09-15 14:25:13Wall Street exec to auction British Empire stamp collection for benefit of Columbia Univ.

FREMONT, Ohio (AP) – Two rare books stolen from the Rutherford B. Hayes Presidential Center library remained missing as of Friday, Sept. 12, including a book of Ohio laws that is believed to be the first book printed in the state.

Three people have been arrested, but authorities haven’t been able to track down the books, valued at $130,000. Federal agents arrested the three in the Columbus area on Sept. 10.

Joshua McCarty, 31, and his girlfriend, Angela Bays, 19, both of Columbus, and Zachary Scranton, 21, of Marysville, were charged with theft of major artwork. They were released on bond after initial appearances in federal court. Messages seeking comment were left Friday with McCarty and Scranton. There was no listing for Bays.

The Hayes Presidential Center includes the library and the president’s former home, which is about 35 miles southeast of Toledo. The estate has been open to the public since 1916.

Hayes, a Republican, served from 1876 to 1880. The former three-term governor of Ohio beat Samuel Tilden by one electoral vote in 1876 without winning the popular vote.

According to an FBI affidavit, McCarty and Bays visited the presidential center’s library on June 27 and asked to look at a book called The Maxwell Code.

A library employee later confronted McCarty after seeing him leave a women’s restroom with the book, which was printed in 1795 and contains the first printing of Ohio laws, the affidavit said. Fewer than 10 copies are known to exist.

The employee returned the book and another book, but he did not realize the pages had been torn out of The Freeman Code, which was printed in 1798 and contained laws of the Northwest Territory, the affidavit said.

Scranton’s court-appointed attorney, Alan Pfeuffer, said Friday his client didn’t intend to keep the book and that it was going to be given to someone else. He declined to elaborate.

Library officials alerted book dealers and auction houses about the missing book. Several book dealers said they were contacted by McCarty and said that he recently sold a copy of The Freeman Code through a Philadelphia dealer who was unaware it was stolen, according to the affidavit. The dealer told authorities he sold the book for $35,000 to someone in England.

Police and FBI agents traced cell phone calls made to the dealer from McCarty, the affidavit said. 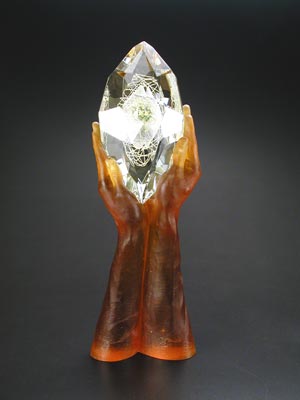 PHILADELPHIA – Final preparations are under way for the National Liberty Museum’s annual Glass Now gala auction of art glass, with proceeds benefiting the museum’s mission to inspire heroes and defuse violence. The museum’s major fundraiser, Glass Now: Generation to Generation, will take place Sept. 20 at Philadelphia Marriott Downtown starting at 5:00 p.m. More than 300 works of glass sculpture, and a stellar array of fine art jewelry will be included in both live and silent auctions. The live portion will also feature real-time Internet bidding via the Internet. This year’s benefit auction includes works from art glass giants such as Harvey Littleton, Dale Chihuly, Paul Stankard, Therman Statom and Steve Tobin, as well as up-and-coming young visionaries.

The annual Glass Now auction was started in 2000 to support the crucial education programs of Philadelphia’s National Liberty Museum. The museum is the only institution in the world that uses art glass as a symbol for liberty: beautiful and strong, yet fragile.

END_OF_DOCUMENT_TOKEN_TO_BE_REPLACED 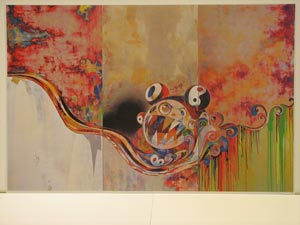 FT. LAUDERDALE, Fla. – Wittlin & Serfer Auctioneers, based in Ft. Lauderdale, have announced details of their 2008 Fall Contemporary Art Auction, which will take place on Saturday and Sunday, Sept. 20 and 21.

The sale will also incorporate paintings by the most desirable of names from the new genre of artists, including the most prominent member of the collective dubbed the “Young British Artists,” Damien Hirst, and cutting-edge Japanese pop artist Takashi Murakami.

END_OF_DOCUMENT_TOKEN_TO_BE_REPLACED

Colleen Russell Criste, the Warhol’s deputy director, will be acting director of the festival, which celebrates its 50th anniversary next year. Ben Harrison, the museum’s curator of performances, will perform the same function for the arts festival. Both officials will retain their duties at the Warhol museum, one of four museums operated by Carnegie Museums of Pittsburgh.

Carnegie Museums officials say they are taking over the festival because of the event’s financial health and other concerns. The festival organizers are also responsible for the city’s annual First Night celebration each New Year’s.

THESSALONIKI, Greece (AP) – Police in northern Greece say they have arrested four people for trying to sell two religious icons and a golden cross dating to the Middle Ages for euro5 million ($7 million).

The arrests follow a sting operation in which an undercover officer posed as a prospective buyer. Police say the icons – religious paintings on wood – represent Greek Orthodox saints. All three artifacts were confiscated.

Under Greek law, all ancient and medieval artifacts are state property. Their sale by anyone except a small number of licensed traders and collectors is strictly prohibited.

Police said on Thursday that a large number of other antiquities was confiscated following raids on the suspects’ homes in Serres, a town 50 miles (80 kilometers) northeast of Thessaloniki.

The suspects were identified as Greeks aged 56 to 74. 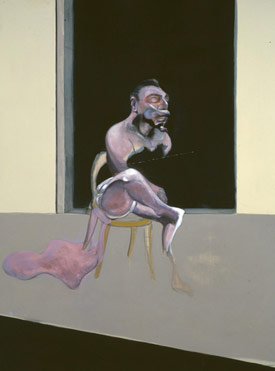 LONDON (AP) – No artist captured the horror of the 20th century quite the way Francis Bacon did.

Bacon spent a lifetime painting the human body in a world ripped apart by the slaughter of two world wars and the Holocaust. More than 15 years after his death, a major new retrospective bound for London, Madrid and New York shows that his twisted forms, mottled flesh and screaming mouths have lost none of their power to shock.