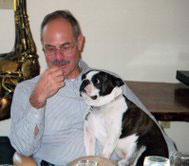 ATGLEN, Pa. (ACNI) – Peter Berwind Schiffer, 60, who founded a book publishing empire based on collecting, hobbies and other special interests, died on Dec. 19 of a heart attack. He was 60 years old.

Born in 1948 in the Philadelphia suburb of Bryn Mawr, Peter Schiffer owned and operated Schiffer Publishing Ltd. from a farm in Atglen, Pa., approximately 20 miles east of Lancaster, Pa. According to his wife of 35 years, Nancy Nutt Schiffer, the business “grew from the kitchen table” upon Peter’s realization that there might be profit potential in resurrecting out-of-print books.

Schiffer was a graduate of Goddard College in Plainfield, Vt. At age 19, Schiffer was struck by a car while changing a tire en route to school. The accident resulted in the loss of a leg. “It didn’t make him handicapped; it made him determined,” Nancy Schiffer told the Philadelphia Inquirer.

END_OF_DOCUMENT_TOKEN_TO_BE_REPLACED

DALLAS (AP) _ Two letters written by first-class Titanic passengers – one who survived and one who perished with the ship – are going up for auction next month in New York.

The letters, written on White Star Lines stationary that says “On board R.M.S. ‘Titanic,'” will be offered in the city and online Jan. 16 by the Spink Smythe auction house.

The letters are expected to sell for $10,000 to $20,000 each, said Robert Litzenberger, a historical autograph specialist at Spink Smythe’s Dallas office.

END_OF_DOCUMENT_TOKEN_TO_BE_REPLACED 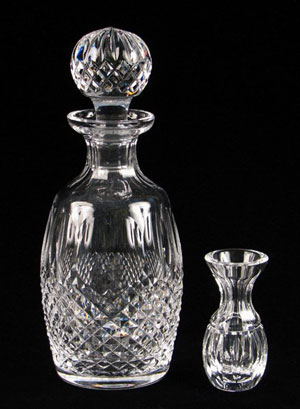 A Waterford crystal decanter in the Colleen pattern, to be offered by Susanin’s Auctions Jan. 10, 2009. Click the image above to view this item and register to bid live online.

JAKARTA, Indonesia (AP) _ For more than two centuries, Waterford crystal and Wedgwood china have been symbols of Irish and British craftsmanship. Now, their future may lie in Asia.

Drowning in red ink, the storied brands, which merged in 1986, have moved most ceramics production to Indonesia to cut costs and now plan the same fate for crystal manufacturing. Their headquarters may soon follow.

Short of funds for operations and loan payments, Waterford Wedgwood PLC is in advanced talks to sell a controlling stake to a U.S. private equity fund for roughly 600 million euros ($846 million) in cash and assumed debt, three people briefed on the negotiations told The Associated Press late last week.

The prospective new owners may move the company’s management and possibly its headquarters to Indonesia, one of the sources said. They would not identify the fund and spoke on condition of anonymity because the talks are confidential.

END_OF_DOCUMENT_TOKEN_TO_BE_REPLACED

SEATTLE (AP) _ The U.S. government wants to seize Charles Morse’s car, because the French government considers it a national treasure.

The Seattle car collector says he would be willing to turn the car over, but he wants to be reimbursed the $927,518 he paid for the one-of-a-kind 1919 Turcat-Mery touring car.

“It’s a one-off automobile with a wonderful history to it. It was built for the Duc de Montpensier, an heir to the French throne,” Morse told The Seattle Post-Intelligencer.

The Duc de Montpensier was a descendant of the Orleans branch of the Bourbon family, which reigned in France from 1589 to 1848 and owned the French castle of Randan in Puy-de-dome.

END_OF_DOCUMENT_TOKEN_TO_BE_REPLACED

PALM BEACH, Fla. (AP) _ A $10,000 statue stolen from the Palm Beach estate of disgraced financier Bernard Madoff has been found, with a message.

Thieves calling themselves “The Educators” have returned a statue stolen from disgraced investment guru Bernie Madoff. And they hope he’s learned his lesson.

The Palm Beach Post reports that the $10,000 copper sculpture turned up Wednesday near the country club Madoff belonged to.

END_OF_DOCUMENT_TOKEN_TO_BE_REPLACED 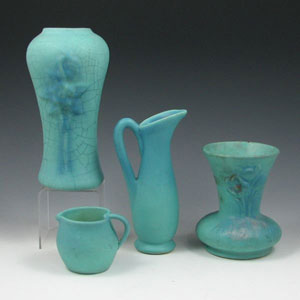 A symbolic purchase made by LiveAuctioneers’ CEO, Julian R. Ellison, this grouping of Van Briggle pottery represents the final lot sold through eBay Live Auctions prior to its closure. The pieces will be housed in LiveAuctioneers’ corporate archive.

NEW YORK (ACNI) – It didn’t take long for the technology sector to produce its first major story of 2009: eBay’s closure of its Live Auctions division and the passing of the baton to eBay Live’s marketing partner of five years, LiveAuctioneers.com.

At approximately 2:45 p.m. on Dec. 31, 2008, the hammer fell on the last auction lot ever to be sold online through eBay Live Auctions. The seller was Belhorn Auction Services of Columbus, Ohio. The winner of the lot – a grouping of four pieces of Van Briggle pottery in the Ming turquoise colorway – was none other than LiveAuctioneers’ CEO, Julian Ellison.

While Ellison is a collector of many things, he is not ordinarily a buyer of pottery. “It was purely a symbolic purchase, and a very important one,” Ellison said. “The articles represent a new era for LiveAuctioneers and will become part of our corporate archive.”