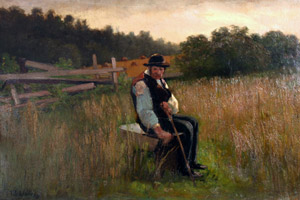 The recently discovered paintings came directly from the estate of a descendant of the artist. They had been stored in the attic of a family residence for more than 70 years. The renowned landscape, portrait and animal painter was active throughout the region from 1858 to 1905.

Most of the paintings were acquired by Wooden Nickel Antiques, owned by Mike and Patty Williams and Tim Miller. The Cincinnati business has a long-standing reputation nationwide as a reliable dealer of antiques and art. The owners of Wooden Nickel Antiques said they are pleased to have this unique opportunity to offer the works of an artist so important to the Cincinnati community in the setting of a local gallery.

END_OF_DOCUMENT_TOKEN_TO_BE_REPLACED

NASHVILLE, Tenn. (AP) – Goodwill Industries has put a valuable painting up for auction for a second time after the winner bidder in the previous auction failed to complete the purchase.

The 1907 watercolor of a harbor at Port of Capri in Italy was painted by Ellsworth Woodward (1861-1939), the influential first Dean of Newcomb College’s School of Art in New Orleans. Although he painted in oils and made etchings, Ellsworth preferred watercolors, and in 1936 the Fine Arts Council established a prize in his name.

The Woodward painting titled Felucca Capri had sold previously on Goodwill’s auction Web site for $8,101 to a bidder from Boston. The Tennessean newspaper reported Wednesday that the bidder could not be found.

Suzanne Kay-Pittman, public relations manager for Goodwill Industries of Middle Tennessee, said the charity tried to notify the successful bidder when the auction ended Jan. 25 and found the account was a fax number. She said the person, whose identity isn’t known, did not respond to e-mails.

A real estate investor dropped off the painting at a Goodwill donation site and said he had no idea it was valuable.

The painting is again up for auction at www.shopgoodwill.com. 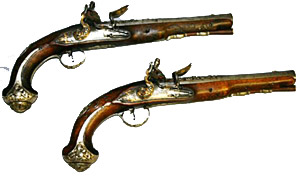 CITRA, Fla. – For more than 20 years David Glynn and his company, Turkey Creek Auctions, have very capably served the estate and personal consignment needs of communities of north-central Florida. Known for its sales held on the third Saturday of each month, as well as special events in between, Turkey Creek realized the next step would be to bring its sales to a global audience via Internet live bidding through LiveAuctioneers.com.

On Saturday, Feb. 21, Turkey Creek will present its first-ever event to incorporate LiveAuctioneers’ services. Their 399-lot Winter Extravaganza will feature antique guns, swords and a wide array of other militaria, followed by an eclectic selection of antiques, furniture, decorative art and collectibles.

The Weapons section of the sale – which also includes medals, flags and war memorabilia – will start at 5PM Eastern Time. Highlights abound within the category, starting with a pair of extra-fine circa-1720-1740 flintlock holster pistols made by Richard Wilson, London.  The guns feature silver repoussé decorative side and top plates with gold and silver inlay. They are similar to the Richard Wilson holster pistols carried by George Washington during the Revolutionary War, which are now on display at the West Point Museum. The pair of 16-inch-long guns are expected to make $8,000-$12,000 on auction day.

Another important antique firearm is the 1851-model Colt Navy pistol with factory ivory grips and a cylinder engraved with the image of a ship. Measuring 13 1/2 inches long, it carries an estimate of $2,000-$4,000.

A quaint and early gun is the circa-1700 Tower blunderbuss. Converted to percussion, this 30 1/2 inch gun was pirate-captured and decorated. It is entered in the sale with hopes of achieving $1,500–$5,000.

END_OF_DOCUMENT_TOKEN_TO_BE_REPLACED 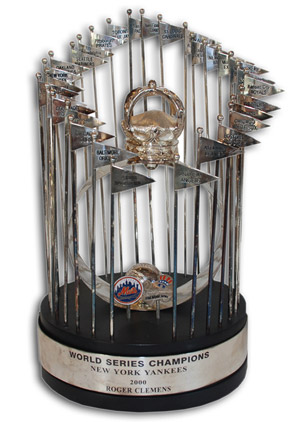 WESTHAMPTON BEACH, N.Y. – Rogers Clemens is one of the titans of baseball – a 7-time Cy Young Award winner and one of only four pitchers ever to strike out more than 4,000 batters in Major League play. And while the history books are in accord on the stellar career statistics associated with the former Yankees superstar, they will probably never agree on one particular question: did Clemens use anabolic steroids to enhance his size and athletic performance on the pitcher’s mound? This is the allegation that was made by Clemens’ former personal trainer, Brian McNamee, in his testimony before the Mitchell Commission, whose December 2007 report cast a sobering pall over professional baseball.

With the passing of time, the sensational headlines swirling around McNamee’s allegations and Clemens’ flat denials of any past steroid use dissipated. But now, in an odd twist, the subject has been revived in the public’s consciousness with the admission by Yankees phenom Alex Rodriguez that he previously injected a type of banned steroid.

Shortly before Rodriguez’s surprise statement, Grey Flannel Auctions secured a consignment for its April 29, 2009 sale that tangibly documents the one-time close friendship between Roger Clemens and Brian McNamee. Consisting of approximately two dozen items, the consignment includes apparel, equipment and memorabilia originally owned by both Clemens and another great Yankees pitcher who trained with McNamee, Andy Pettitte. According to the consignor, all of the high-profile collectibles were previously part of McNamee’s personal collection, hence each is accompanied by a letter of authenticity signed by McNamee.
END_OF_DOCUMENT_TOKEN_TO_BE_REPLACED 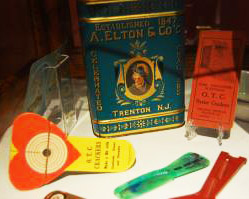 Advertising items from Trenton’s once diverse food industry are included in the museum exhibit. Image courtesy of Trenton City Museum.

TRENTON, N.J. – The capital city of the Garden State was once home to major breweries and numerous dairies, bakeries and food processing plants. The Trenton City Museum has recognized these enterprises in an exhibition titled A Taste of Trenton, which continues through March 15.

Participants may bring one Trenton-related bottle to find out more about the company that distributed it, however, this is not an appraisal.

The Trenton City Museum is located at the Ellarslie Mansion in Cadwalader Park. Hours are Tuesdays through Saturdays, 11 a.m. to 3 p.m. and Sundays, 1 p.m. to 4 p.m.

A Taste of Trenton is being presented in conjunction with Key Ingredients: America by Food, a Smithsonian Museum on Main Street traveling exhibition running concurrently at the New Jersey State Museum in Trenton. 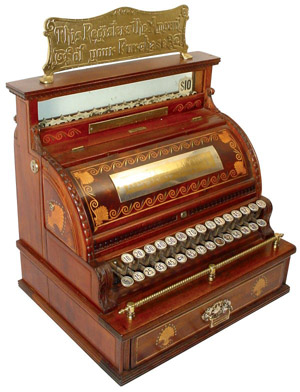 ST. CHARLES, Ill. – The Cash Register Collectors Club will conduct a swap meet and club meeting on Thursday, April 2, in the back parking lot of the Holiday Inn Express, 1600 E. Main St., St. Charles, IL 60174. The semiannual outdoor swap meet is open to the public.

Each year this event gets bigger and attracts more buyers and sellers. Men and women of all ages move around the parking lot haggling over prices and telling stories about the one (cash register) that got away.

The club will conduct a meeting in the Holiday Inn Express conference room starting at 6 p.m. There will also be a show-and-tell period at the conclusion of the meeting. People interested in joining the club are welcome to attend the meeting.

For more information contact club member Michael Zitowsky at 908-295-2320 or via e-mail at cashreg47@aol.com. The club has a Web site for more info also at www.crcci.org. Dues is $30 a year for U.S. residents and $40 a year for foreign club members. 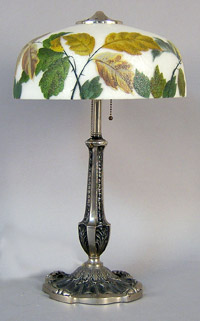 DOWNINGTOWN, Pa. – Many of the items to be sold at Pook and Pook Inc.’s first Variety Sale of 2009, Feb. 26-27, have been deaccessioned from educational institutions including Henry Ford Museum/Greenfield Village. The auction will feature more than 1,200 lots of 18th-, 19th- and 20th-century American and Continental furniture and accessories.

Pieces from the various museums include a collection of paperweights by Orient & Flume, Hansen, Zimmerman, Kaziun, Baccarat and others; large groups flatware having bone, horn and celluloid handles; various landscapes and portraits by listed artists; mantel clocks; fireplace implements; and ceramics.

From an estate in Wynnewood, Pa., comes an array of antiques including historical Staffordshire decorated with American scenes, Steiff sterling silver, decoys, weapons, mantel clocks, Kittinger furniture, fraktur and other works on paper.

A group of glassware from a New Jersey collection includes Steuben, Gallé and art glass by famous makers.

END_OF_DOCUMENT_TOKEN_TO_BE_REPLACED 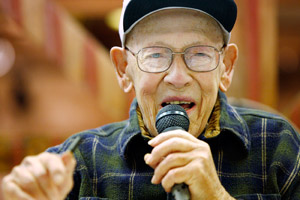 At 90, he is thought to be Ohio’s oldest active auctioneer, although the state doesn’t track the ages of its 3,300 licensed practitioners.

“I don’t know of anyone older,” said Lori Landry, executive director of the Ohio Auctioneers Association, a trade group.

Auctioneering is about the seventh career for Clum, who got his first license in 1978 after stints as a truck driver, an airplane builder, a road worker, a soldier and a few other things.

These days, he works part time out of his son’s Rushville auction house, Mike Clum Inc. Retirement is not a word that rolls off the smooth talker’s tongue.

“I keep coming around because you get to meet so many nice people.”

Mike Clum Inc., located 40 miles southeast of Columbus, hosts monthly auctions in a converted log barn that are frequented by antiques and collectibles dealers from Ohio and neighboring states.

Three generations of Clums and spouses run the business, including Mike and his wife, Kathy; and Mike’s sister, Becky Rosier, and her husband, Bob.

END_OF_DOCUMENT_TOKEN_TO_BE_REPLACED 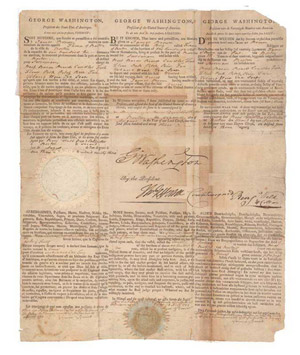 Covering a wide range of collecting interests, the 700+ lot catalog features a fine offering of Presidential and First Ladies’ autographs, including a George Washington-signed ship’s paper countersigned by Thomas Jefferson, and a very rare Andrew Jackson military appointment for James Melville Gillis, a U.S Navy officer who went on to establish the U.S. Naval Observatory.

In addition, this auction features a wide variety of better Americana and a number of first-edition books and atlases. Collectors of space related memorabilia will be interested to know that in addition to signed photographs of American astronauts, this auction also feature an extensive archive of retained copies of Western Union telegrams sent to Christa McAuliffe and her family. Containing more than 100 pieces of correspondence, this archive spans the period of McAuliffe’s selection at the first “Teacher in Space” through the Challenger Disaster and includes heartfelt correspondence from President Ronald Reagan, Vice-President George Bush and Reverend Billy Graham.

Americana highlights include fresh-to-market material from a New England Athenaeum and a 1910 photograph album containing over 50 images of the Alaskan frontier. This album contains a variety of images accomplished by noted Alaskan photographer Eric A. Hegg, taken during his time as company photographer for the Copper River  Northwestern Railway.