LOS ANGELES (ACNI) – In Chinese astrology, this is may be the year of the cow or the ox, but it’s not boding well for the rabbit or the rat. The Los Angeles Times is reporting that the person who lodged winning bids totaling more than $40 million for the bronze fountain heads of a rabbit and rat in Christie’s Feb. 25 Yves Saint Laurent auction in Paris did so with no intention of consummating the sale. In auction-industry parlance: the lots were “sold” to a deadbeat bidder – although not the usual kind. In this case, the bidder is openly acknowledging his actions.

In a copyrighted article, LA Times writer Barbara Demick reports that the phone bidder, Cai Mingchao, is “an advisor to a Chinese nonprofit group dedicated to repatriating relics.” Mingchao claims he placed the bids with no intention of actually buying the 18th-century art objects. He contends that the bronzes, which were looted from a Chinese imperial palace but purchased legally many years later by the late fashion designer Yves Saint Laurent, should be returned to China.

The LA Times quoted Cai Mingchao as saying, “I must stress that I do not have the money to pay for this…I was merely fulfilling my responsibilities.”

So far, there has been no response from Christie’s regarding the status of the two art objects, which were sold as separate lots in the three-day auction of the fine art and antiques collection of Yves Saint Laurent and Pierre Bergé. Shortly before the Feb. 25 auction session, a French judge ruled against the Chinese government, which had sought to have the fountain heads removed from the auction and turned over to Beijing.

The bronze heads disappeared from the summer Imperial Palace on the outskirts of Beijing when French and British forces sacked it at the close of the second Opium War in 1860. Saint Laurent purchased the bronzes legally in the 1970s.

RICHMOND, Va. (AP) – A rare 1776 copy of the Declaration of Independence belongs to a Virginia technology entrepreneur, not the state of Maine, the Virginia Supreme Court ruled Friday.

Richard Adams Jr. of Fairfax County purchased the document from a London book dealer in 2001 for $475,000. But the state of Maine claimed it belongs to the town of Wiscasset, where it was kept by the town clerk in 1776.

Virginia’s high court said that a lower court did not err in its ruling in Adams’ favor because Maine didn’t prove the document was ever an official town record and that Adams had superior title to the print.

Adams’ attorney, Robert K. Richardson, has argued that Wiscasset’s town clerk copied the text of the Declaration of Independence into the town’s record books on Nov. 10, 1776. It’s that transcription, not the document upon which it was based, that is the official town record, Richardson said.

“The fact that the print was not made by an authorized public officer and was not intended to be the official memorial of the Declaration precluded the print from qualifying as a ‘public record’ under common law,” the court said in its ruling.

Adams, who gained fame when he founded UUNet Technologies Inc., the first commercial Internet service provider, sued to establish title to the document after learning that Maine was trying to get it back. His attorney told the high court last month there’s no evidence the document was ever an official record kept by the town of Wiscasset and that Adams is the rightful owner.

Maine Assistant Attorney General Thomas Knowlton argued that Wiscasset never gave up ownership of the document, which is one of about 250 copies printed in 1776 and distributed to towns throughout Massachusetts to be read to residents. Maine was part of Massachusetts at the time.

Maine state archivist David Cheever said he found it “incredible” that the state’s rights were trumped by a private collector. Maine contended the document never should have been sold because of a state law which presumes that public documents remain public property unless ownership is expressly relinquished by the government.

“To us, it’s a public document. It was then. It is now,” Cheever said.

Knowlton said the state strongly disagrees with the decision, but acknowledged that it is the end of the road. There are no federal issues that could be pursued to the U.S. Supreme Court.

“The unfortunate result is a public record that we believe rightfully belongs to the people of Maine is now in the hands of a private collector in Virginia,” Knowlton said.

Richardson said Friday evening that he and Adams are pleased with the decision.

Whether it was an official record or not, the document apparently was retained by Solomon Holbrook, Wiscasset’s town clerk from 1885 until his death in 1929. An estate auctioneer found it in a box of papers in the attic of Holbrook’s daughter’s home after she died in 1994.

Knowlton said town clerks in those days worked out of their homes – a likely explanation for why the document remained with the family instead of being passed along to the new clerk. Holbrook also was a jeweler.

The document changed hands a couple of times before Adams bought it. Cheever said officials became aware of the print’s existence after receiving an anonymous tip and decided to try to get it back because of its historical significance.

Cheever said only 11 of the approximately 250 copies printed by Ezekiel Russell in Salem, Mass., are known to still exist. One that originally belonged to the town of North Yarmouth also was obtained by a private collector but eventually was returned, Cheever said.

The opinion can be found at:
http://www.courts.state.va.us/opinions/opnscvwp/1080987.pdf 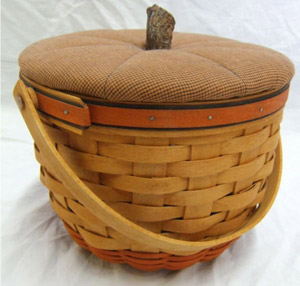 NEWARK, Ohio (AP) – The Longaberger basket company is laying off 295 employees and reducing the wages of salaried workers, including the company president.

The cuts include 120 management positions and 175 manufacturing jobs. The company says all the laid off workers can apply for seasonal positions that become available next month.

Tami Longaberger says the layoff decisions were difficult but necessary given the hard economic times.

The company has about 2,000 employees. It uses independent sales consultants around the country to sell products directly to consumers.
___
On the Net:
Longaberger: http://www.longaberger.com/

ALLENTOWN, Pa. (AP) – A 7-foot painting that may or may not be the work of famed pop artist Keith Haring went on sale on eBay Friday night. Opening bid: 99 cents.

The seller is a Pennsylvania man, Ed Oswald, who believes the Hope painting to be an original Haring.
But his cousin Kermit Oswald, a childhood friend of Haring and one of the world’s leading authorities on his work, has long said it’s a knockoff.

As a result, the eBay listing does not claim the painting is an authentic Haring. Instead, buyers will bid on “an original painting on board from the 1980s in a remarkable likeness and style of a Keith Haring, with a very interesting story & provenance.”

The unsigned painting is on the back of a piece of wood paneling and shows a yellow stick figure holding aloft a red heart. The word “hope” is printed within the heart’s outlines. Thick squiggles radiate outward, a Haring trademark.

Ed Oswald said he discovered the painting four years ago in the attic of relatives who knew Haring from childhood and bought the piece at auction in the 1980s. He said he immediately thought it to be Haring’s work.
But when he tried selling it as such in April 2005, his cousin told The Associated Press the painting was a fake.

“I don’t know the origins of the thing. I just know what it’s not,” Kermit Oswald said Friday.

Told the starting bid was 99 cents, he gave a hearty laugh and quipped: “I hope it closes at that. That would be fair.”

If deemed authentic, the painting could be worth hundreds of thousands of dollars, said Norb Novocin, whose Delaware-based company, Estate Auctions Inc., is handling the 10-day auction.

Haring, who grew up in Berks County, Pa., died in 1990 of AIDS at age 31. His work is marked by colorful geometric shapes, bold lines and recurring motifs such as radiating babies, animals and flying saucers.

Ed Oswald said he was thrilled when he found the painting but now just wants to be rid of it. “As far as my wife and I are concerned, it’s just a piece of art that looks like something he could have done and that’s it,” he said. “It’s just time to let it go.”

He said he’s had the piece hanging in a friend’s stall at an antiques market hoping someone who knew something about it – perhaps even the artist who painted it, if not Haring – would see it.

A few people wanted to buy it, including one who offered several thousand dollars, but nobody came forward to claim it as their own or give any clues about its origin, said Oswald, who thinks Haring outlined the piece and had someone else fill it in with color.

Novocin said he doesn’t know how much the piece might fetch but it could draw a high bid from someone who hopes to get it authenticated.

That would be a gamble, however. Kermit Oswald is the president of the Haring Foundation, which is the definitive authority on whether works are authentic. 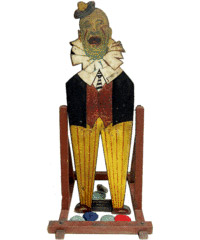 This swinging figure, 64 by 19 inches, is from the

If you look up the definition of “folk art,” you’ll run into confusion. That’s because the meaning has changed since the 1920s, when the term gained widespread use, thanks to Abby Aldrich Rockefeller (1874-1948). She was a collector of crude but charming paintings, sculptures and other folk art. Her husband, John D. Rockefeller Jr., helped restore Colonial Williamsburg.

Abby’s fame and her art selections determined what followed in the world of folk art. The paintings she collected were done by untrained artists whose works lacked perspective, used bright colors and simple lines, and often did not flatter the subject. Carvings were large cigar-store figures, carousel figures or weather vanes. Also considered folk art in those early days were everyday items like furniture, embroidery, baskets and ironwork if they were homemade in regional styles by talented people. Many art experts thought these everyday items were just crude copies of upper-class originals. But collectors began to see value in the folk-art tradition. More and more objects were included in the definition: mourning pictures, scrimshaw, quilts, carved parts of ships, handmade store signs, carved eagles, woven coverlets, pottery animals and face jugs. A 1980s book on folk art extended the definition to include tattoos, gravestones, firefighting tools like decorated buckets and belts, and even machine-made, metal mechanical banks and windmill weights.