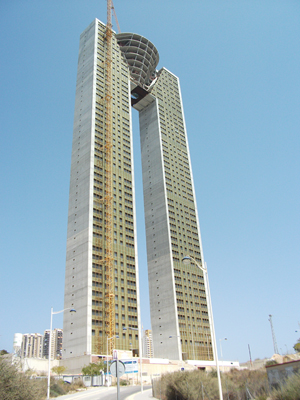 BENIDORM, Spain, (AFP) – Stretching into blue skies far above other towers crowding the Spanish resort of Benidorm, the Intempo skyscraper stands as a hard-to-miss beacon of excess from the days of Spain’s property bubble.

Floor numbers flash by on a blue screen as a new elevator soars up this 590-foot-tall giant on the skyline of Benidorm, a mass tourism resort on eastern Spain’s Mediterranean coast.

At the foot of the 54-floor building—touted as the highest residential skyscraper in Europe—a semi-Olympic swimming pool waits to be tiled before welcoming the 1,000 residents who developers hope to lure to its apartments.

The building’s twin towers are covered in copper-colored windows and joined at their summit by a vast inverted pyramid, its concrete facade still open to the elements.

Soon, the concrete floors and bare wires will be transformed into two 300-square-meter luxury duplex penthouse apartments, their glass walls overlooking several kilometres of beach on one side and hinterland on the other.

“You see, there is no reason for controversy: there are 11 elevators,” said Guillermo Campos, technical architect of the building’s property developer Olga Urbana, who is determined to rebuff newspaper articles saying the builders forgot one elevator shaft.

Campos rejected concerns by Greenpeace Spain and others about the environmental impact of concentrating so many people in a single building.

“Look at that clean water,” he said, pointing to a beach from the giddy heights of the Intempo.

Some 35 percent of the building’s apartments have been sold, Campos said, a relatively small proportion with so little time before its scheduled delivery in early 2014.

Hoping for a property market recovery from mid-2014, Campos said he was counting on interest from Russian, Algerian and British buyers despite prices that appear lofty: from 350,000 euros ($473,000) for a studio to 3 million euros for a duplex.

Launched in 2007 in the dying days of Spain’s property bubble, which imploded the following year with devastating economic consequences, the skyscraper’s construction has been hit by public disputes with the builders who are demanding a million euros ($1.3 million) in unpaid bills from the promoters.

The loan that financed construction was transferred last year to Spain’s “bad bank,” Sareb, set up to pool the financial industry’s toxic assets as part of a European Union-financed banking sector rescue for Spain.

Caixa Galicia, the bank that extended the original loan, has since been rescued by the state. As a result, it was obliged to discount the price of some assets and property loans on its books and move them to Sareb.

A spokeswoman for Sareb said the fact that it had taken over the Caixa Galicia loans did not mean their repayment was considered to be doubtful.

Nevertheless, the association of Intempo with Sareb, a symbol of the property market collapse, can only complicate the titanic task of selling 269 luxury apartments in a stagnant market.

“It does not matter” if it takes a little longer to fill the building, said the city hall’s chief architect, Jose Luis Camarasa.

“Here, the city development has been following a plan conceived 50 years ago,” he said, arguing that this had allowed Benidorm to avoid the pitfalls of the property boom.

The first city development plan was drawn up in 1955, then modified in 1963 to scrap height limits on towers so as to “democratise tourism,” Camarasa said.

Prices “will probably have to come into line with the market”, Camarasa admitted. But for the property market in Spain’s eastern Valencia region, “Benidorm is the jewel in the crown,” he said. 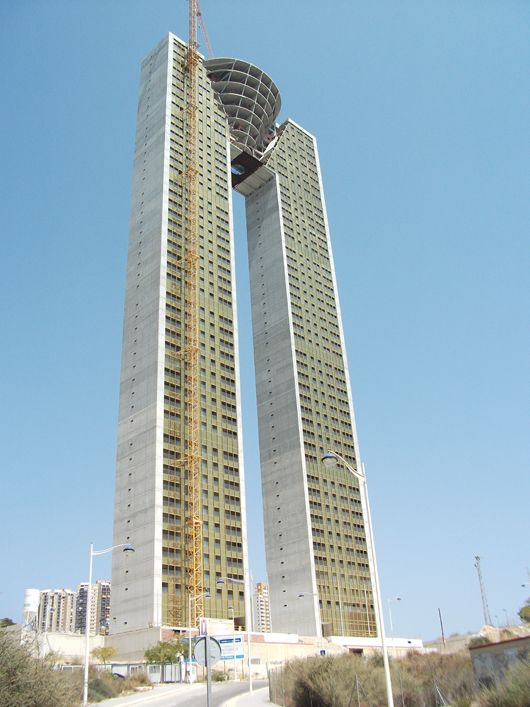 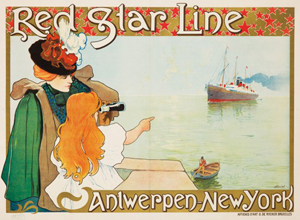 ANTWERP, Belgium (AP) – In today’s world of cruise ship travel, it is easy to forget how life-changing boarding a steamer once was.

When young Sonia Pressman Fuentes stepped aboard the Westernland II ship in Antwerp with her family on April 20, 1934, it was the biggest leap she would ever take.

“It made it possible for me to be alive—very simple answer. Otherwise we would have been killed,” the Jewish feminist leader said, recalling her family’s flight from the Nazis.

Pressman Fuentes was back at the original docks of this huge North Sea port for Friday’s ceremonial opening of the Red Star Line migration museum, which shows how millions of Europeans steamed across the ocean toward the United States and other parts of the Americas over the past two centuries.

It charts the migrations of everyone who traveled on the shipping line, from composer Irving Berlin to scientist Albert Einstein to Israeli politician Golda Meir. It is the story of countless people escaping poverty, seeking adventure, avoiding persecution or dodging certain death.

“What we are trying to achieve with the museum is to bring back all the stories of lives that were changed here,” said museum project coordinator Luc Verheyen.

Over two million passengers sailed from Europe to America between 1873 and 1934 on the Red Star Line. Antwerp was popular because it already was a massive port and it had a well-established Jewish community.

In 1893, a five-year-old Israel Isidore Baline was among the émigrés, part of a family fleeing increasing anti-Semitic violence in Russia. Baline became Irving Berlin after the family entered the United States and settled in New York’s Lower East side. His classics like God Bless America and White Christmas made him famous in his new country and around the world.

Now, one of Berlin’s pianos stands in the museum, on extended loan from the family. His daughter and two granddaughters were on hand for the opening.

“Coming to this museum is like completing a circle. To think my father left from this building, and here we are in it!” his daughter Linda Emmet said.

“It wasn’t an easy voyage,” she added. “The man in the upper bunk dropped his penknife onto my father’s forehead. It left a scar for the rest of his life.”

No lasting damage was done to Berlin. A few decades later, his fame became such that the Red Star Line’s SS Belgenland was playing a Berlin foxtrot for its first and second class passengers.

Nobel Prize winner Einstein was another famous passenger. When he was on the Belgenland II in 1933, he learned that the Nazis had confiscated his possessions so he decided not return to Berlin. Instead, he used Red Star Line stationery to declare his resignation from the Prussian Academy for the Sciences.

The museum highlights the eternal struggle of migration, a lesson as true today as it was decades ago.

“We tend to forget how hard it is to emigrate,” said Caroline Emmet-Bourgois, Berlin’s granddaughter. “You are leaving behind your identity. You are going into the unknown. You are trying to give a future to your children and you are willing to lose what you already have to start anew.”

The museum opened to the public on Saturday. 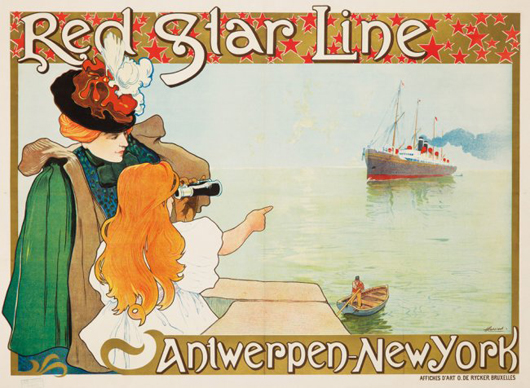 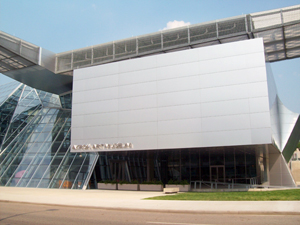 The Free Thursday program starts this week at the Akron Art Museum. Normal adult admission is $7.

The museum says the Free Thursday programming sponsored by the J.M. Smucker Co. jelly maker based in Orrville, Ohio, is meant to make art relevant to audiences of all ages.

The first Free Thursday will include morning yoga for preschoolers and an evening documentary film about on a retired New York postal worker and his librarian wife who collected thousands of art works.

Herb and Dorothy Vogel are donating 2,500 works from their collection, with items going to one museum in each state. Fifty were allocated to the Akron museum. 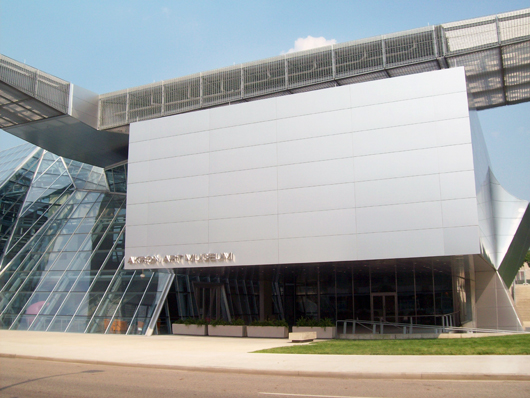 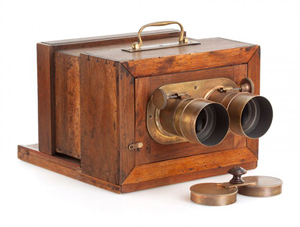 Early cameras, like this stereo wet plate camera, will be displayed at the International Photography Hall of Fame and Museum. Image courtesy LiveAuctioneers.com Archive and Auction Team Breker.

ST. LOUIS (AP) – A museum honoring photographers is preparing for its grand opening in St. Louis after making its move from Oklahoma.

The St. Louis Post-Dispatch reports the International Photography Hall of Fame and Museum officially opens Friday night in Grand Center with its first exhibition, titled “The Past, Present & Future of Nature Photography.”

The Hall of Fame was established in 1965, but it didn’t have its first physical home until 1977 in Santa Barbara, Calif. It moved to a science building in Oklahoma City, Okla., in 1983, but a decision to limit its exhibits to scientific displays prompted officials to relocate it to Missouri.

The new museum also includes an extensive collection of historic photographic equipment that is displayed in cases along walls and in the center of the room. 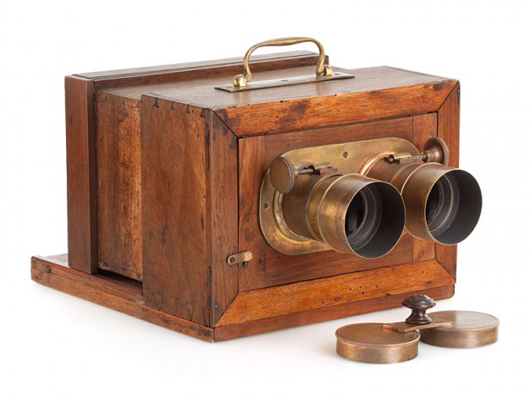 Early cameras, like this stereo wet plate camera, will be displayed at the International Photography Hall of Fame and Museum. Image courtesy LiveAuctioneers.com Archive and Auction Team Breker.