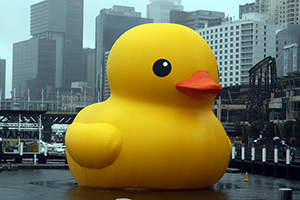 TAIPEI (AFP) – A giant yellow duck on display in Taiwan became a high-profile victim of Thursday’s earthquake after it deflated before exploding during an attempt to reinflate it, officials said Friday.

The 18-meter-tall (59-feet) duck in northern Taoyuan county began to deflate when an air pump went off during a power outage triggered by the 6.3-magnitude quake on Thursday night.

The earthquake shook buildings in the capital Taipei and across much of Taiwan, sending panicked residents running for shelter, although only a few minor injuries and little damage were reported.

However, organizers were forced to suspend the exhibit of Dutch artist Florentijn Hofman’s giant bath-toy replica, after powerful winds caused the duck’s rear end to burst while it was being re-inflated on Friday morning, rendering it a flattened yellow disc floating on a pond.

Officials said the damage would be difficult to repair and they were planning to borrow another Hofman-designed duck commissioned by Kaohsiung city government, which attracted four million visitors during a one-month display in the southern port earlier this year.

The duck in Kaohsiung — a slightly larger version of the one that captivated Hong Kong recently — was temporarily deflated and lifted to land as a safety precaution when the powerful Typhoon Usagi pounded the island in September.

Since 2007 the original duck designed by Hofman — which is 16.5 meters tall — has travelled to 13 cities in nine countries, including Brazil and Australia, on its journey around the world.