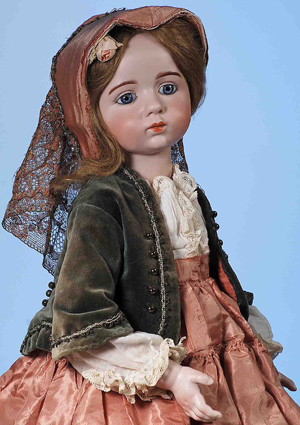 Top lot of the sale, French circa-1914 bisque doll created by sculptor Albert Marque, 22 inches, signed and incised with the number ‘12,’ $168,000. Image by Frasher’s Doll Auctions.

“The winning bidder is a collector of French dolls and German character dolls, and they obviously go for the very best,” said Barbara Frasher, president of Frasher’s Doll Auctions.

As noted by doll historians, during World War I, Albert Marque was persuaded by Parisian couturier Jeanne Margaine-LaCroix to sculpt 100 fashion dolls, each signed, numbered and clothed in a custom-designed costume representing royalty or a particular region of France. The exquisite 22-inch dolls were celebrated by the French not only as important artworks but also as cultural icons that stood up proudly to the influx of wartime dolls from Germany.

The doll in Frasher’s sale was numbered “12,” making it a very early and desirable example. “I have only seen two other A. Marque dolls at auction with an earlier number,” said Frasher. “While it has been said that 100 of these dolls were commissioned, that number is speculative. The highest number I have ever seen on this type of doll was around ‘60.’”

Frasher said the quality of sculpting on the A. Marque doll is “exquisite…You can tell that it was the work of an accomplished sculptor, not only from the quality of the doll’s head, but also the hands. The bisque head and limbs were added to a uniquely flared torso designed by French artist Aristodema Botta. The entire presentation is very unusual.” The doll was a popular attraction at the auction preview, Frasher said, because many collectors had never before had the opportunity to examine a rare A. Marque doll in person.

In 1993, Frasher’s made headlines with another French doll. The rare, 23½-inch exhibition model depicting an elegant Creole lady was made by Jumeau expressly for the 1884 World Exposition in New Orleans. At Frasher’s, it sold for $231,000, and in so doing, set a world auction record for a French doll – a distinction that remained unchallenged for 17 years.

The A. Marque doll in the July 9 sale came from one of three private collections featured in Frasher’s 277-lot sale. After the event, which grossed $418,670, dolls were shipped to points throughout the United States as well as to Russia, the United Kingdom, Australia, Italy, France, Germany and the Netherlands.

Barbara Frasher noted that approximately 20% to 25% of the sale was sold over the phones, with significant underbidding through LiveAuctioneers.com. The top lot purchased online was a circa-1880 French bisque, wood-bodied fashion doll attributed to Louis Doleac, which realized $10,305.

Another highlight was the especially nice 24-inch bisque Bebe Triste by Emile Jumeau, with very finely painted facial features and blue paperweight eyes that rendered a melancholy expression. The doll settled at the midpoint of its estimate, selling for $15,680.

Another fine Jumeau, a circa-1878 Premiere Bebe, was noted as being the earliest of its particular type. Described in the auction catalog as having “superb complexion, modeling and expression, and exceptional eyes,” the 15-inch bisque beauty featured an excellent original body, wore a fine fitted silk couture costume and bore a “Jumeau Medaille d’or Paris” stamp. It sold within estimate for $7,280.

A section of the sale that “caught fire” with collectors was the extensive offering of doll costumes and clothing. “Some of the dresses brought as much as $1,500; and some of the bonnets went for $500 to $600. There’s a huge interest in accessories and clothing,” said Frasher. “Costuming a doll to make it one’s own is something collectors really enjoy. The highest prices are paid for antique clothing in good condition, but there’s also a strong market for contemporary productions made to look like period clothing.”

Frasher, whose doll-auction business is now in its 29th year, said gloomy economic news has not deterred collectors from bidding on dolls. She believes that, overall, the doll market is stronger than some other avenues for investment. “Collectors have concluded that owning dolls brings them enjoyment and that they are a pretty sound investment over the long term. They’re not like a stock. You can hold them in your hand and enjoy them. The fact that there are still a lot of quality dolls coming onto the market and attracting good prices is a positive sign.”

Frasher’s Doll Auctions will hold its next event on Nov. 5-6, 2011, again at the KCI-Expo Center. The approximately 300-lot sale will have a heavy emphasis on French and other high-quality dolls. The inventory will also include a large selection of vintage costumes, dresses, bonnets and accessories. Quality consignments are currently being accepted for Frasher’s January auction in Scottsdale, Arizona – now a 20-year tradition with antique doll buyers.

View the fully illustrated catalog from the July 9 auction, complete with prices realized, at www.LiveAuctioneers.com. 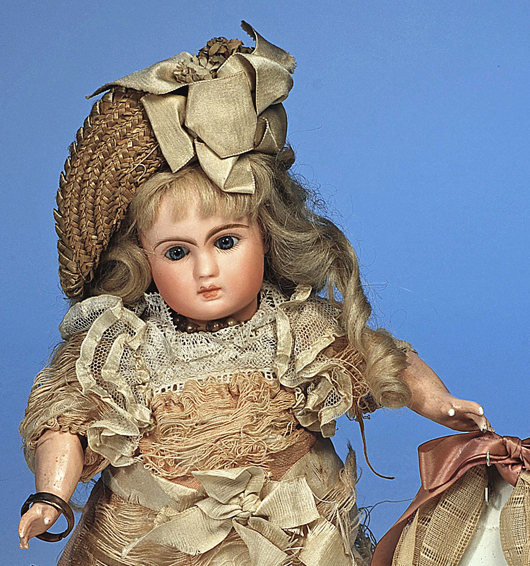 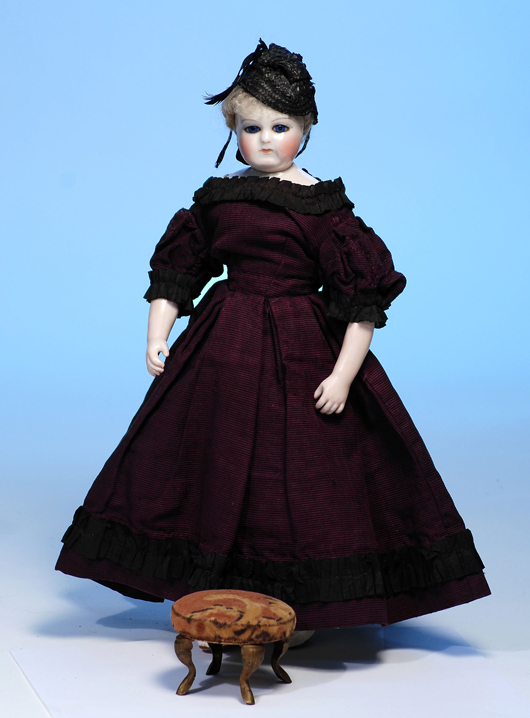 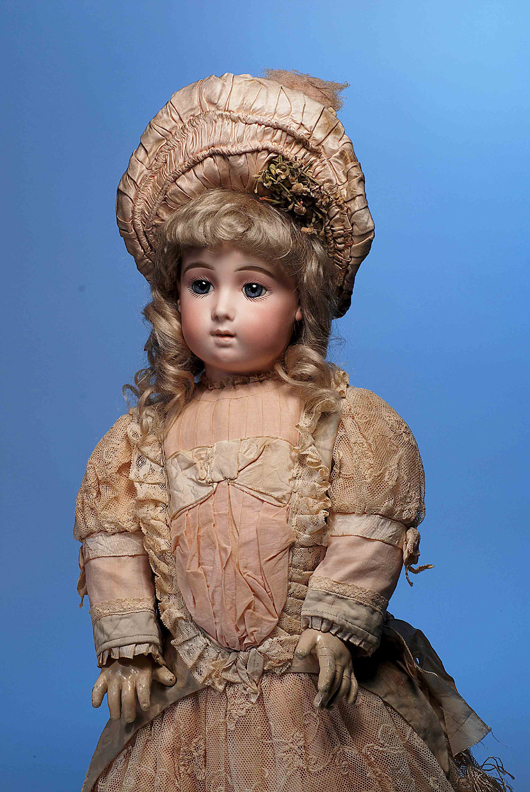 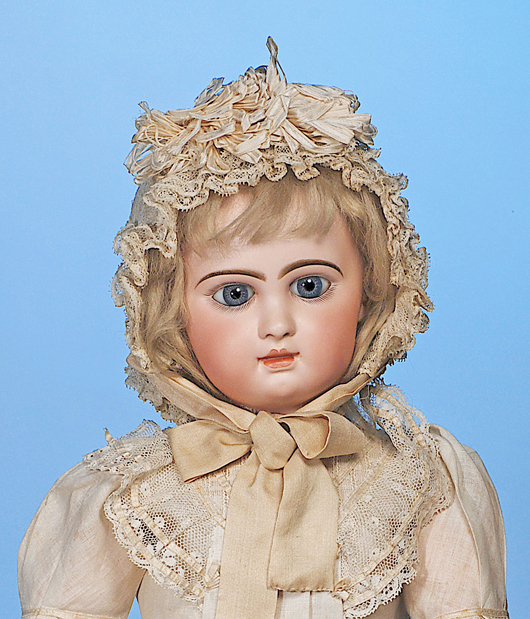 Emile Douillet Jumeau bebe with ‘E.D.’ signature, introduced in 1892 and produced for only a short period of time, 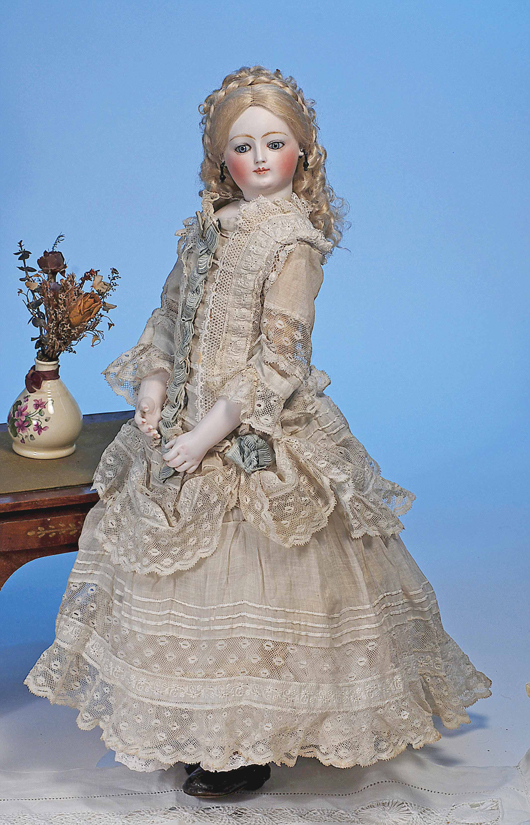 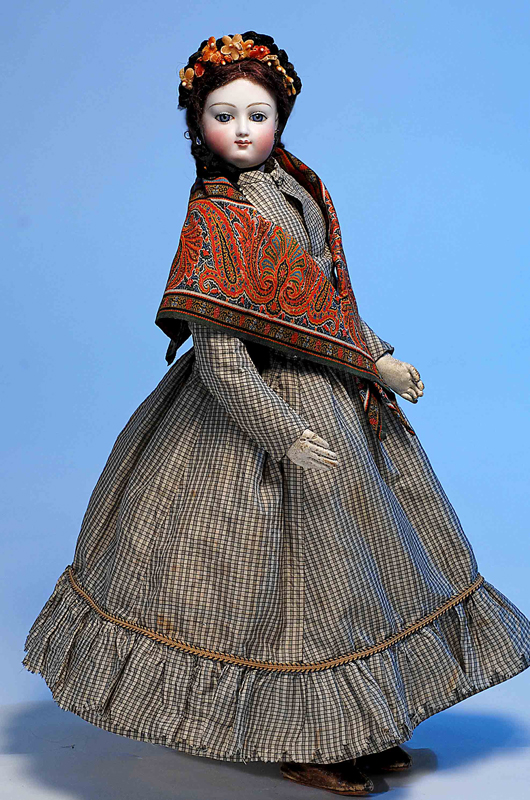 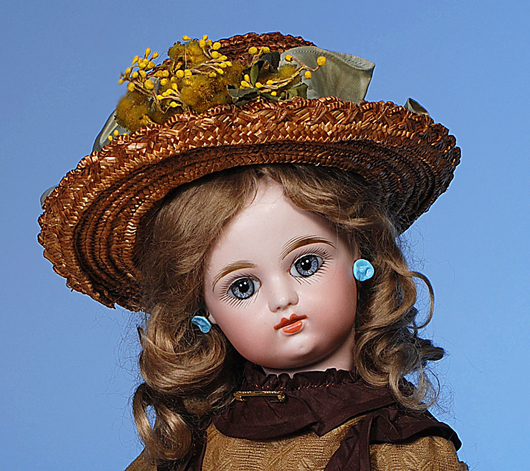 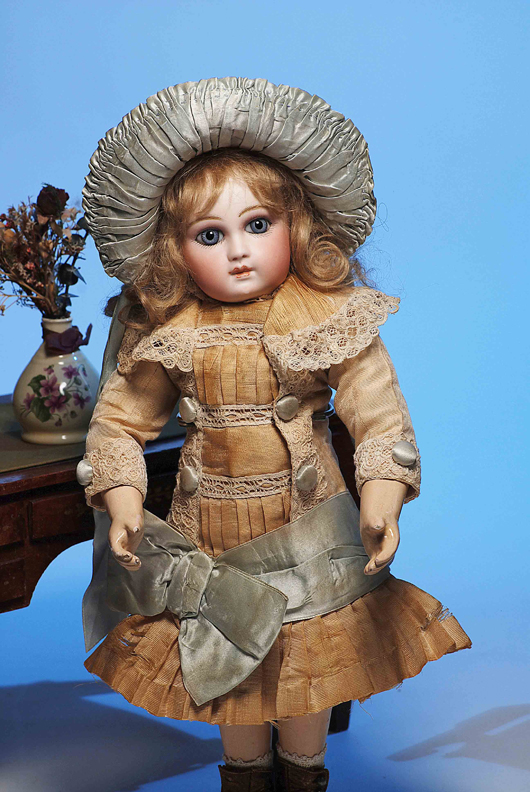 Circa-1878 Jumeau Premiere Bebe, 15 inches, a coveted example of the earliest of Jumeau’s bebes, $7,280. Image by Frasher’s Doll Auctions.

Frasher’s Nov. 7 doll auction is ‘All About Small’

Fenton Glass holds what might be final tent sale