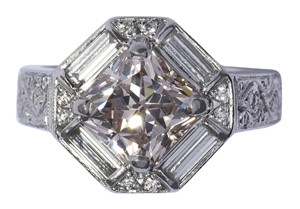 OAKLAND, Calif. – Clars Auction Gallery’s Fine Art, Jewelry and Decoratives Auction held May 17-19 will go down in the firm’s history as their largest sale to date generating $3.2 million. Closing the eighth month of their fiscal year, Clars is up 59 percent over their last fiscal year, recording higher sales than any previous year. All categories outperformed expectations and buyers from around the globe drove many final sale prices to well beyond estimate. LiveAuctioneers.com provided Internet live bidding.

The top seller of the three-day event was realized in the fine jewelry category. A rare fancy brownish pink diamond, near colorless diamonds and platinum ring was centered with one cut-cornered square modified brilliant cut (Radiant) diamond weighing 3.04 carat. Estimated to sell for $100,000 to $150,000, this exceptional work of art in jewelry sold for $143,000. Also selling impressively was a fine jadeite, sapphire, diamond and platinum ring that brought $38,500.

The second highest price achieved in the sale overall was realized on a Chinese hardwood huanghuali coffer. Expected to achieve a high of $25,000, fiercely competitive bidding drove the final sale price to $77,400. Coming in just behind this was a lot of four Chinese hardwood huanghuali “lamp hanger” chairs. Also more than doubling high estimate, this lot went for $71,400. Tying for third place in this category was a three-section desk, a pierced wanzi cabinet and a pair of lattice panel cabinets which all surpassed their estimates selling for $65,000 each. The highly anticipated huanghuali collection from the Gerber Estate generated over $640,000 with the Asian category in total generating just shy of $1 million on the 113 lots offered.

African American Modernism prevailed yet again at Clars with a rare set of three hand-painted, polychrome porcelain enamel on steel tiles by Sargent Johnson (American, 1888 -1967) titled, Two Women, The Bulls and Dog, which achieved a price of $26,000. Johnson produced only 100 of these pieces and this was the first time this medium by the artist had ever come to the market. A bronze sculpture titled, Tribal Woman, by Elizabeth Catlett (American, 1915-2012) added to this category’s strength to realize $15,500 against its $10,000 to $15,000 estimate.

The second best performer in Fine Art was a watercolor by Frank Tenney Johnson (American, 1874-1939) titled A Mexican Smuggler (1914). Measuring 33 inches in height, it was the largest work on paper ever to come to the market by the artist, realizing an impressive outcome of $47,600. Adding to the stellar results of watercolors, two beautiful works by Percy Gray, Chief Gall and Carmel Valley” realized $17,500 and $11,900.

A gorgeous white 1954 Chevrolet Corvette Roadster in original condition sped off for at $65,500, the top item in Clars’ Decorative Arts and Furnishings category. Racing behind were two 2008 Ron Simms custom motorcycles which sold for $12,000 and $13,000 and a 2001 Harley-Davidson Heritage Softail Classic rumbled off for $7,000.

Befitting for a northern California-based auction house, just a stone’s throw from the famous “Gold Country,” a California gold nugget weighing 10.9 total ounces sold for just over $20,000 and a second weighing in a 9.9 total ounces brought $12,000.

In the decorative arts offered, highlights included an antique Continental woven tapestry panel, which sold nicely for $19,000. In the impressive sterling offerings, a large collection of Georg Jensen went for over $40,000 and a Tiffany water pitcher sold for $17,800 followed by a Chinese Export silver tea service by Woshing, Shanghai, which brought $9,500.

The top seller in the furniture offerings was a late 19th century Louix XV-style ormolu mounted kingwood and satine parquetry decorated table, which sold very well for $16,600. Turning one century ahead, a Danish Has Wegner Papa Bear Chair brought $7,800.

Rounding out this category was a fine ethnographic collection that included an Idoma, Nigeria carved wood figural sculpture that sold for $3,500. 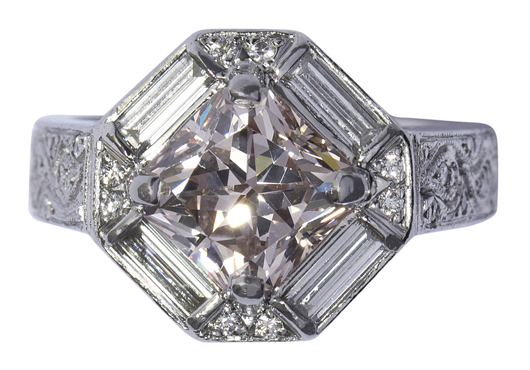 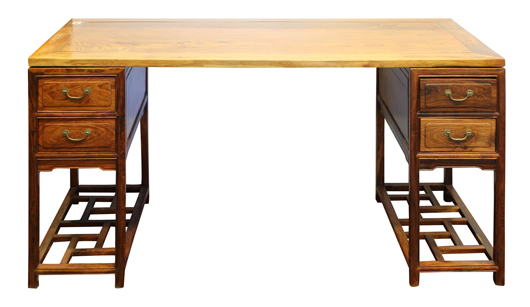 The second highest price achieved in the sale overall was realized on a Chinese hardwood huanghuali coffer. Expected to achieve a high of $25,000, the fiercely competitive bidding drove the final sale price to $77,400. Clars Auction Gallery image. 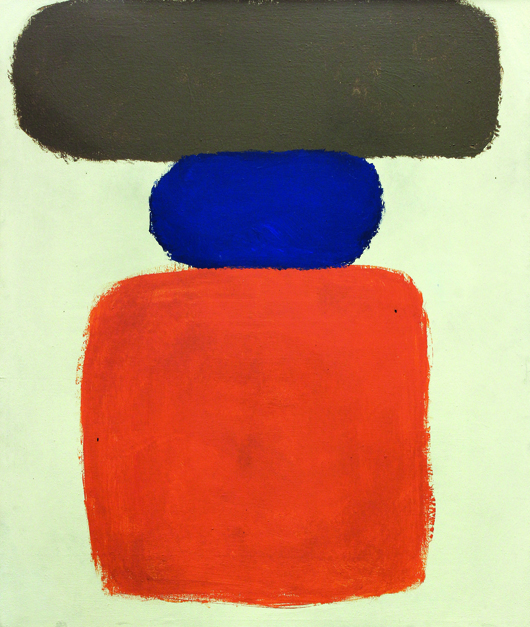 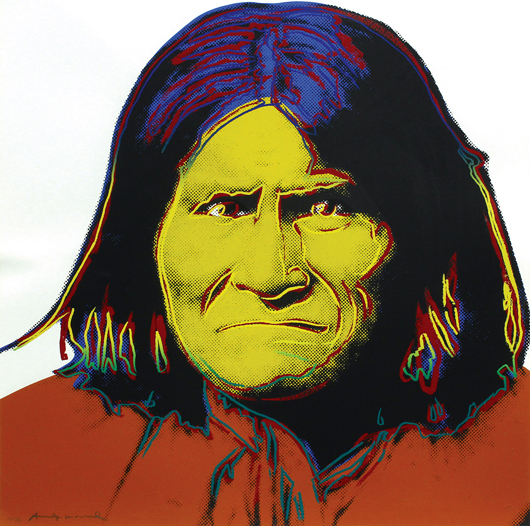 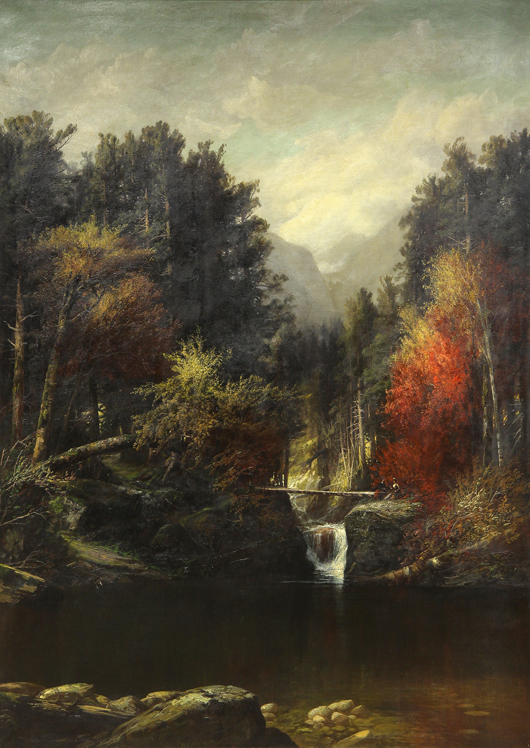 The largest painting ever to come to auction by Harrison Bird Brown (American, 1831-1915) also set a record for the artist. Titled, ‘Picnic by the Falls (White Mountains, Maine),’ this work achieved $23,800. Clars Auction Gallery image. 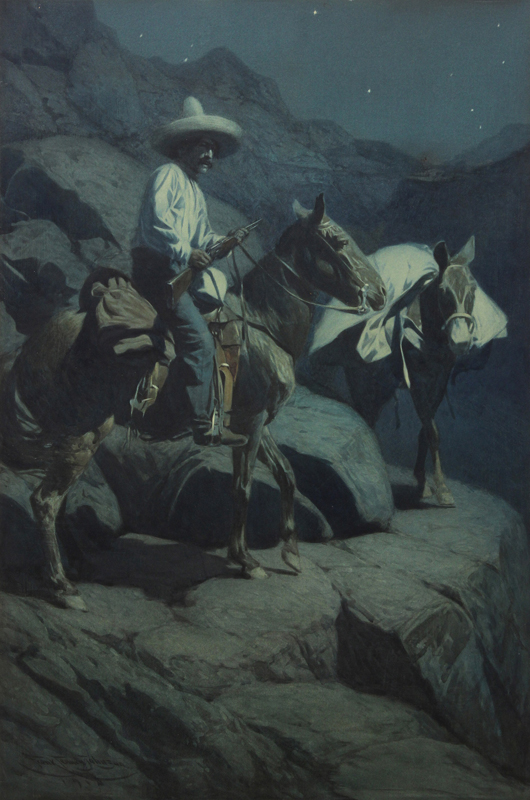 The second best performer of the sale was this watercolor by Frank Tenney Johnson (American, 1874-1939) titled ‘A Mexican Smuggler’ (1914). The exceptionally large work made $47,600. Clars Auction Gallery image.

This gorgeous1954 Chevrolet Corvette in original condition sped off, against heated bidding, for a smooth $65,500. Clars Auction Gallery image. 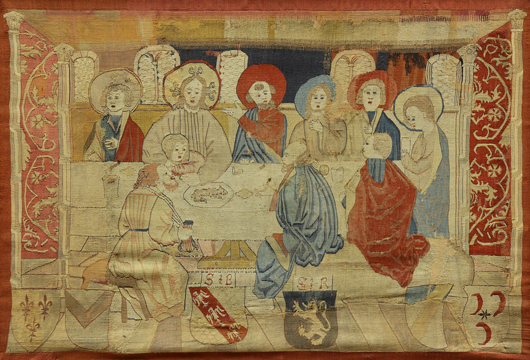