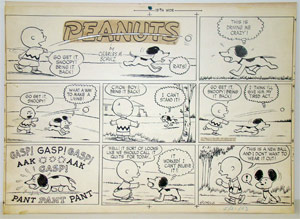 OCEANSIDE, N.Y. – An original “Peanuts” Sunday page, rendered in pen and ink in May 1953 by the late comic illustrator Charles Schulz, soared to $67,800 at a multi-estate sale Sept. 13-14 at Philip Weiss Auctions. The eight-panel strip showed Charlie Brown and Snoopy playing fetch. In addition, two daily “Peanuts” strips sold for $21,470 each, bringing the three-strip total to $110,740.

All things considered, this sale was way better than I expected, with lots of surprises along the way,” said owner and auctioneer Philip Weiss. “I didn’t expect this level of activity – it was very exciting. Toy trains, comic books and animation art, in particular, did very well.”

About 1,300 lots changed hands in the sale that grossed more than $500,000. Nearly 300 people attended the event in person, while more than 2,500 others registered to bid online. In addition, a bank of five phones rang continually during the weekend, with all three “Peanuts” strips selling to phone bidders. Weiss said he fielded about 5,400 absentee bids – 2,600 on his website and 2,800 on LiveAuctioneers.com, which facilitated online bidding.

The Saturday session, Sept. 13, kicked off with about 500 lots of toys, trains and toy soldiers. That was followed by Part 2 of the B.L. “Phil” Philips collection. Mr. Philips was a collector of rare, collectible robots and space toys. The session also featured a single-owner toy truck collection. The second day of the auction was dedicated to comics, comic art, original cover art and sports memorabilia.

A highlight of the sale was original cover art for Batman #173 (August 1965), drawn in pen and ink by the noted illustrator Carmine Infantino, realized $38,420. The DC cover measured 14 inches by 19-3/4 inches, with the storyline, “Secret Identities For Sale” identified in the lower right corner. The piece was not without its problems; brown staining, moisture stains and a torn center paste-up kept the final price from being even higher.

An original New York Yankees usher’s uniform, worn at Yankee Stadium in the 1940s or ’50s by the owner, J. O’Brien, climbed to $8,190. Included were the original jacket, pants and size 6-3/4 inches hat, marked “Caleb V. Smith & Son.” The jacket boasted a large blue Yankees patch, and the pants still had the original tag, marked “All Bilt Uniforms, Fulton St., New York.” All three pieces had some soiling.

An Ives Railway standard gauge lot – comprising a locomotive, tender (broken) and four cars – sold for $7,625. All of the pieces showed overall wear, and the engine and cars appeared to have repainted areas. Also, an original framed “Alice in Wonderland” model sheet, with a certificate of authenticity, from the classic 1951 Walt Disney film, brought $7,062. A 19th-century presentation rosewood baseball bat, with an engraved silver plaque, was a hit at $4,180. The bat, about 35 inches long, had been presented in 1888 to the John J. Dunn Base Ball Club for winning the Gillooly Association title. Also, a Coca-Cola Vendorlator VMC upright 10-cent vending machine, 57 inches tall, with the original key and in fine operating condition, hit $2,145.

battery-operated Bear the Magician, made by Yonezawa of Japan, earned $3,390. The toy was tested and all functions came up positive. The only flaw was its original box that had some light edge and corner wear. Also, a rare Tonka pressed steel toy truck, made in the 1950s as a company piece and never actually retailed in stores, changed hands for $3,160.

Philip Weiss Auctions has several auctions scheduled for the remainder of 2008. A three-day sale slated for Oct. 24-26 will feature toys, dolls, rock ’n’ roll and Hollywood memorabilia, circus material, rare books and more “Peanuts” comic art. The sale will include a Gen. John J. Pershing jacket; a collection of John Hershey books and signed material; toy soldiers, including Mignot; and a huge collection of Hollywood photos.

Highlights from the November sale include what many consider the Holy Grail of sports cards – a T-206 Honus Wagner baseball card, graded SGC 3 – from the original owner; an original-owner collection of about 450 T-206 cards, including a Demmitt error; an original Yankee Stadium Babe Ruth photo; and other sports-related lots. Also to be offered in November: a letter from Frank Lloyd Wright to the board of directors at the Guggenheim Museum, critical of the pending museum’s design; a rare and beautiful Louis Vuitton trunk; bats signed by Babe Ruth; a bat signed by Ruth and Lou Gehrig; a 1927 Babe Ruth signed ball; a Yankee signed ball with Ruth and Gehrig; and an archive of letters written by baseball legend Ty Cobb. Also secured for the November sale: three Schulz “Peanuts” dailies; two “Prince Valiant” pages (one by Foster, the other by Murphy); a Herrimann “Krazy Kat” daily; a Sullivan “Felix the Cat” Sunday page; a 1930 “Popeye” daily by Segar; a hoard of 1950s comics, including “Superman” and “World’s Finest” splash pages; a Jack Kirby “Avengers” page; and a “Famous Funnies” #1 comic book.

Philip Weiss Auctions conducts its sales in Oceanside, N.Y. (on Long Island). The firm is always accepting quality consignments for future sales. To consign an item, estate or collection, you may call them directly, at (516) 594-0731, or e-mail them at phil@prwauctions.com. To learn more about the firm, click on www.prwauctions.com. 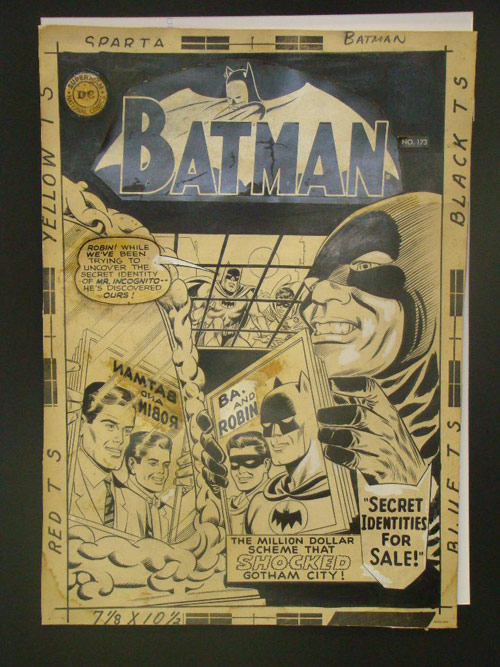 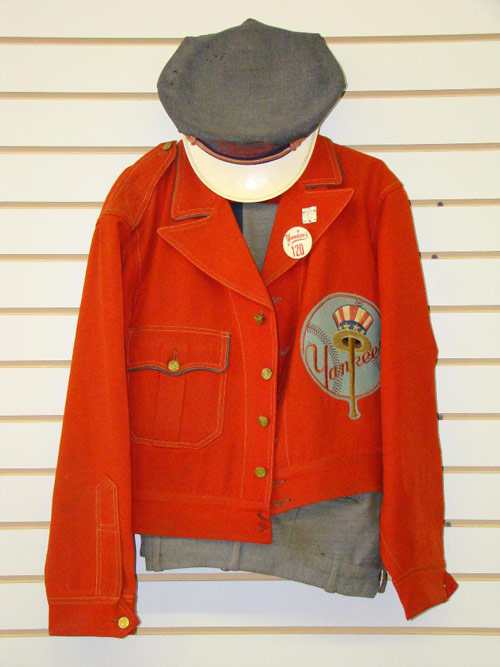 An usher at Yankee Stadium wore this uniform during Yankee home games about 60 years ago. The outfit hit $8,190. Image courtesy Philip Weiss Auctions. 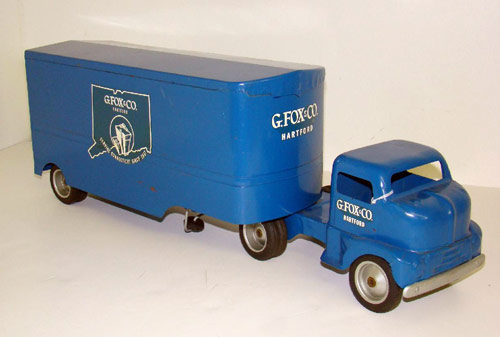 Made as a promotional item for a company in the 1950s, this Tonka truck is a rare model. It delivered a $3,160 winning bid at a recent Philip Weiss sale. Image courtesy Philip Weiss Auctions.

Exciting photographs, daguerreotypes to modern, to be sold at Be-hold Oct. ...