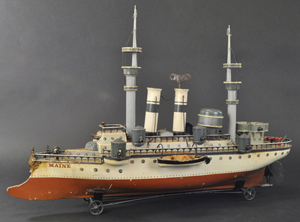 VINELAND, N.J. – An enthusiastic gallery of bidders brought their A-game to Bertoia’s May 3-4 Toy Picks auction, bidding actively against a formidable contingent of phone and LiveAuctioneers bidders from throughout the United States and abroad. The attraction was a gleaming array of toys, trains, dollhouses and banks presented alongside the sale’s special highlight: Part I of the late Bill Bertoia’s personal collection of antique occupational shaving mugs.

The auction totaled $1.5 million, led by Lot 318, a circa-1902 first-series Marklin Battleship Maine that realized $64,900 (all prices quoted are inclusive of 15% buyer’s premium). The 30½inch-long tinplate clockwork ship was an “attic find in virtually unplayed-with condition,” said Bertoia Auctions associate Rich Bertoia. More than a century after its production, the hand-painted beauty still had its original masts, rails, two lifeboats and multiple guns. “Collectors want originality and condition right along with rarity. This boat covered all three bases, which is why it easily reached the high end of its estimate range,” Bertoia said.

The presale estimates on the selection of Lehmann and Martin wind-ups ran true to form, with buoyant prices noted all across the European tin category. “There was a lot of interest in the Lehmanns, especially the Primus roller skater (Lot 388), which sold for $14,160. Before the auction, collectors were very curious as to what that particular toy might sell for,” Bertoia said. “There was always a very healthy competition between Lehmann and Martin to see who could come up with the most cleverly designed toys, and today’s collectors benefit from that competition, which produced excellence in design.” The Lehmanns in the May 3-4 sale came primarily from the same collection; Part II will be offered by Bertoia’s later this year.

A possible prototype that garnered ringside attention at the preview was Lot 307, an early mechanical toy with movable metal boxers. The toy consisted of a well-constructed metal on wood boxing ring with side levers to activate the figures and prompt punching motions. Unmarked and of unknown origin, it was the first toy of its type ever to pass through Bertoia’s doors. It sold for $2,360.

Train buffs also paid a premium for railway cars with colorful advertising on their sides. Gauge 1 advertising cars, which are larger, are especially desirable. Two such examples – one of them advertising Pabst Blue Ribbon Beer; the other promoting Schlitz – earned individual auction prices of $21,240.

Sturditoy was the brand of the day with pressed steel collectors. Lot 1044, a bright red 1930 “Oil Company” tractor and trailer tanker, came from the Tom Palumbo collection with earlier provenance from the Donald Kaufman collection. Estimated at $8,000-$10,000, the impressive 25-inch-long delivery truck applied the brakes at $15,340. A 24-inch Sturditoy oil tanker, circa 1927 and finished in green with red disc wheels, surpassed its $4,000-$4,500 estimate to settle at $7,670.

Comic character toys received a well-earned share of attention, and the prices paid did not go unnoticed on those in attendance. “Everyone remarked afterwards on how well the comic character did in the sale. It was reassuring to see those prices,” said Bertoia. Lot 65, a Linemar Mickey the Magician wind-up with original box conjured a winning bid of $4,100; while Lot 42, a 1923 Powerful Katrinka with Jimmy in a wheelbarrow, made by Nifty, was bid to $2,650.

Jeanne Bertoia, owner of Bertoia Auctions and an acknowledged expert on figural cast-iron doorstops, confirmed that Lot 1131, Girl with Umbrella, was the only known example of its particular form. The depiction of a little girl holding a parasol and dressed in a 1920s red two-piece swimsuit was described in Bertoia’s catalog as “lovely and quaint” and a “book example.” It sold for an impressive $8,850 against an estimate of $1,000-$1,500. Another doorstop highlight was Lot 1301, a Clown with Arms Apart, which secured a bid of $3,250, nearly three times its high estimate.

The centerpiece of the sale was Part I of the premier collection of antique occupational shaving mugs amassed over a 15-year period by the late Bill Bertoia, co-founder (with wife Jeanne) of Bertoia Auctions. Many exquisitely rare mugs were contained in the collection, which Jeanne recalled as being a source of great enjoyment to her late husband. “It fascinated him that these mugs represented so many careers that ultimately were replaced by either machinery or a better idea,” Jeanne said.

Rich Bertoia remarked that his brother Bill’s attraction to occupational shaving mugs had been “instant…He really enjoyed all the images. We both started out by collecting bottles, and he developed an eye for beautiful designs and figurals. Once he found his first few mugs, that was it. He was hooked.”

Jeanne Bertoia commented after the sale: “Bill would have been thrilled to see the attention and prices his shaving mugs received, and he would have been very proud that our son Michael was at the podium auctioning them.”

Rich Bertoia agreed, adding that his nephew Michael has “turned into a well-rounded in-residence auctioneer for us, following in the footsteps of our principal auctioneer, Tim Luke, who sets the gold standard for his profession.”

View the fully illustrated catalog from Bertoia’s May 3-4 auction, complete with prices realized, at www.LiveAuctioneers.com. 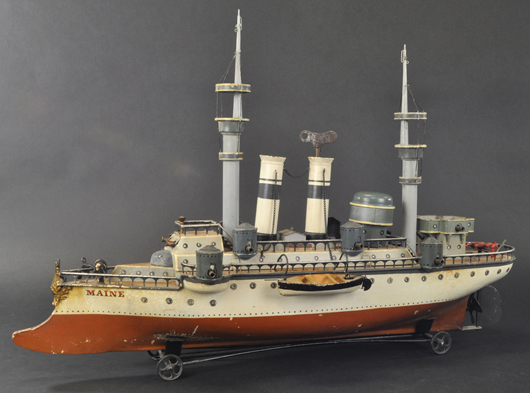 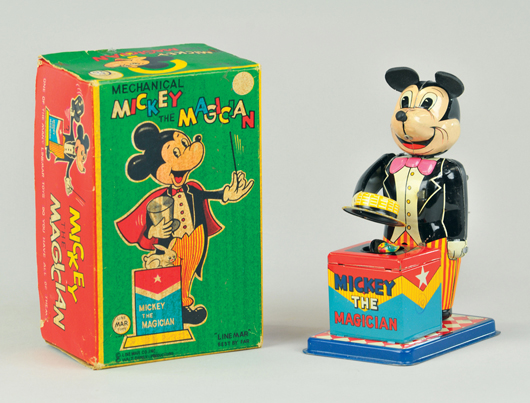 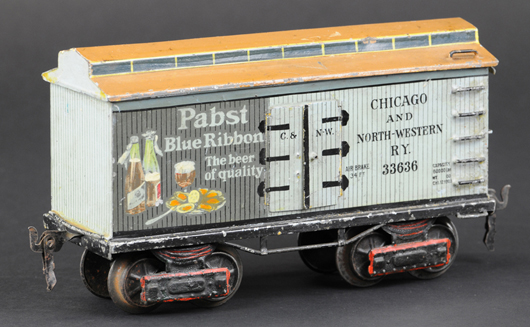 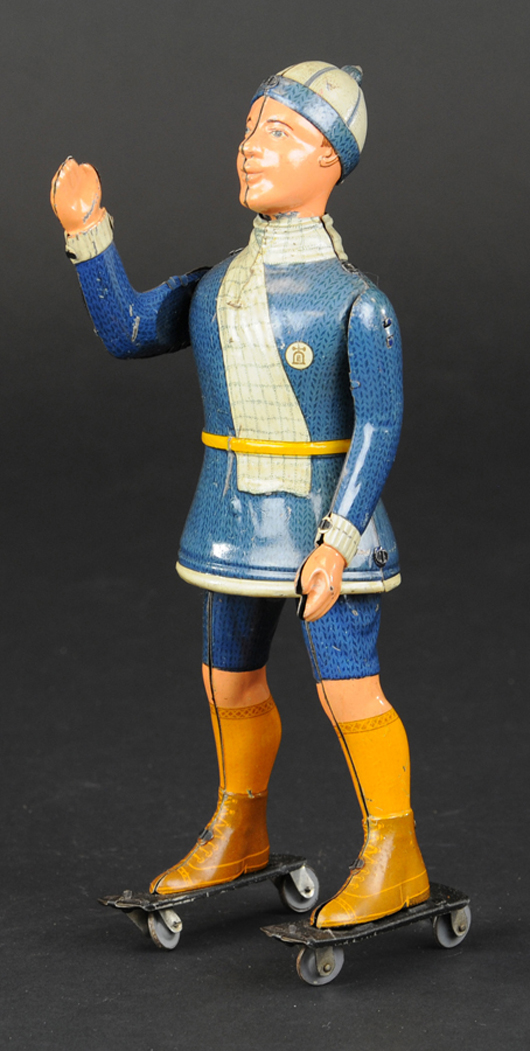 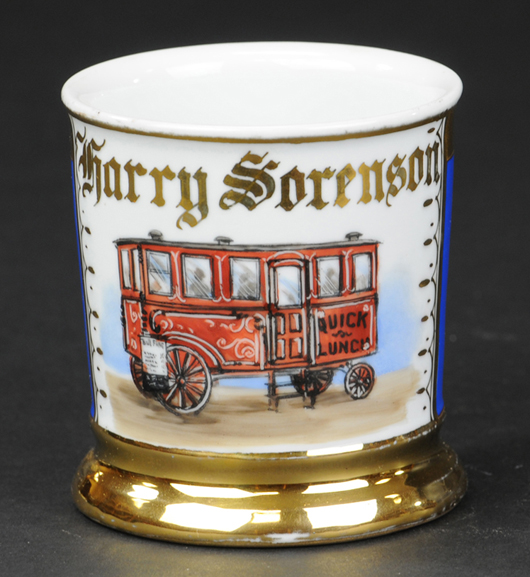 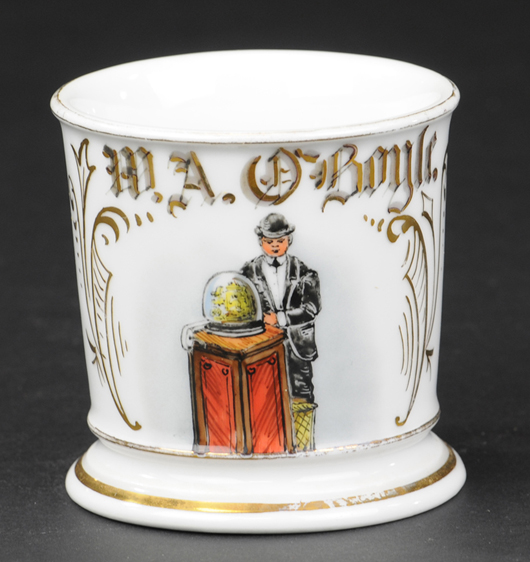 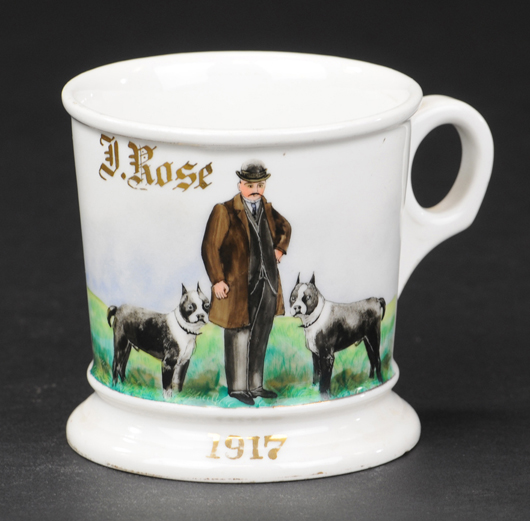 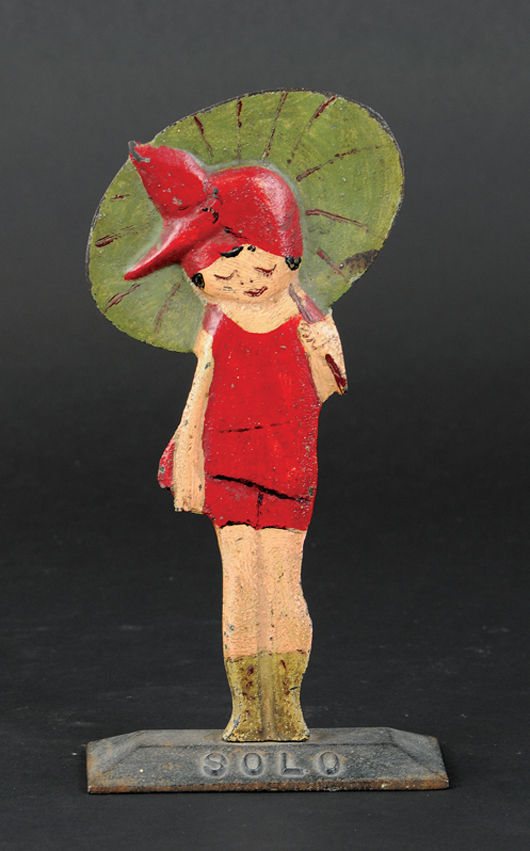