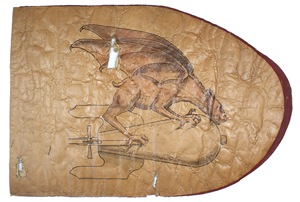 Green was assigned to the French Escardille 131, Bomber Group 4. His bomber bore the insignia of a gargoyle clutching a bomb. Originally printed and hand-colored, the 26 1/2-inch by 41-inch insignia, with background and border painted in red, was applied to the very fabric of Lt. Green’s plane. It was signed by the printer (L. Braun, Paris) and the artist (Gudin Faucher).

The artwork was in remarkable condition, considering it had bullet hole damage from when Green was forced to crash land his airplane. The archive contained 50 documents including Green’s flight log for missions flown, the 1919 published history of all the members of his squadron, and a framed portrait of Green in uniform, with gargoyle insignia.

The sale was billed as Militaria Auction No. 69 for Mohawk Arms, a company that has become synonymous with quality militaria auctions. It conduct only two auctions per year, but they are generally packed with a wide array of items spanning multiple conflicts and generations. This auction was no exception, as around 900 lots that collectors found desirable went to new owners.

“We were pleased with the results of this sale overall, and it once again proved that there will always be a market for the better, high-end items,” said Raymond Zyla, owner of Mohawk Arms. “Any good medals, badges and military orders found eager bidders, and we discovered that American World War II items documented or related to specific individuals did quite well.”

Areas of the market that are somewhat soft now, Zyla observed, include uniforms from the European Imperial period, Civil War pieces such as leather goods, photography and average condition muskets (excluding Confederate firearms) and some lower-grade Colt weapons.

“But quality sells, no matter what,” he said. “The market is healthy at the high end, always has been.”

Following are additional highlights from the auction. All prices quoted include a sliding scale buyer’s premium, which ranged from 10-17.5 percent.

A German Panzer “75” bronze assault badge with a squared-off wreath/eagle and a solid back, with the number “75” shown in the panel at the base of the wreath, garnered $2,530. Also, a 1937 Christmas greeting card signed in ink by Adolf Hitler, with a handwritten ink addition reading “sent to you with highest regards,” with an embossed eagle/swastika, brought $2,473.

Other Nazi items included a book from Hitler’s personal library, titled Ja-Sagen Zum Judentum (“Say Yes to Judaism”). The book, a rare, 1933 publication of a Berlin radio station, dealt with the plight of the German Jews and contained numerous pencil notations by Hitler. It brought $1,821. Also, an 11-inch by 9-inch matted and framed ink-signed photo portrait of Herman Goring wearing his decorations and holding his Nazi field marshal baton, made $881.

A Japanese (Manchuko) breast star of the Grand Cordon award, claimed by a G.I. during World War II and one of only 144 breast stars awarded, having a multicolored enamel octagonal center on a red enameled cross set with pearls, rose to $2,056. An original Mexican War musket (Springfield M1816), converted to percussion, with a sword bayonet that was probably issued and used by one of the Germanic militia units in the Mexican War, topped out at $1,762.

Three lots realized identical selling prices of $705. The first was a commemorative period medal, honoring the cavalry leader Gen. George A. Custer, who fell at the legendary Battle of Little Big Horn. The medal showed a profile of Custer in uniform, with crossed sabers and side flags. The second was a World War II Army Nurse Corps “Flying Nurses” shoulder patch, worn by nurses assigned to the China-Burma-India area of operations. It’s hand-embroidered and rare. The third was a coconut carved by a U.S. Marine into an uncomplimentary caricature of a Japanese soldier. Decorated coconuts were used by the Marines on Okinawa for target practice. This one showed a seated figure, wearing glasses and a helmet and sporting buck teeth and a painted Japanese flag. Rounding out a list of just some of the sale’s top lots, a circa-1850 South Indian sword with a straight 31-inch broad blade that widens toward the tip commanded $529.

Mohawk Arms Inc., is always accepting high-quality consignments. To consign a single item, a collection or an entire estate, call them at 315-893-7888 or e-mail Mohawk@MilitaryRelics.com. 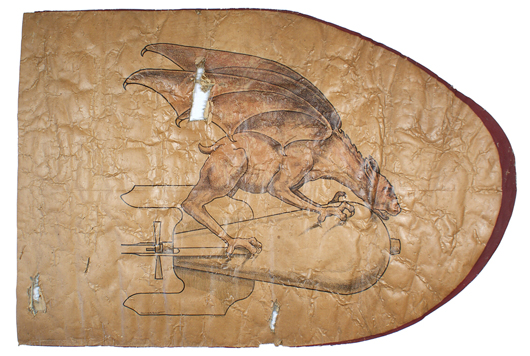 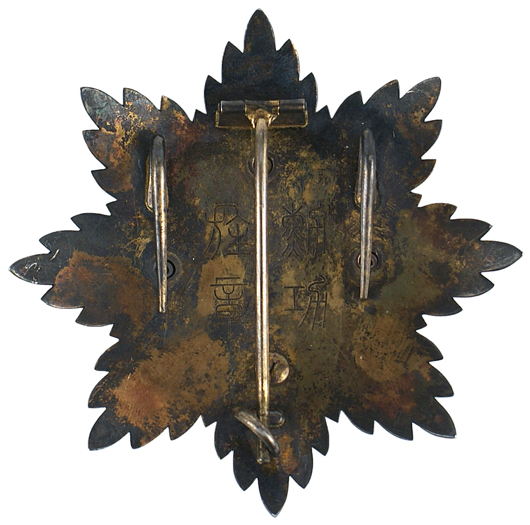 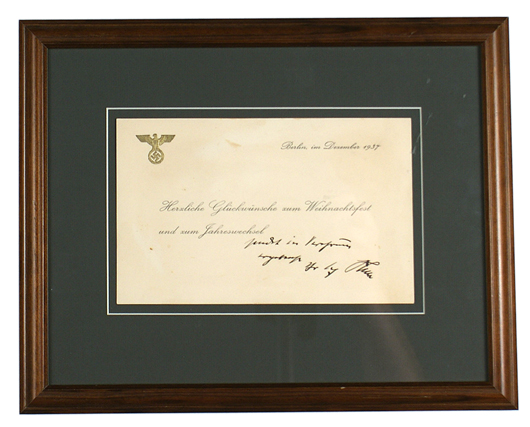 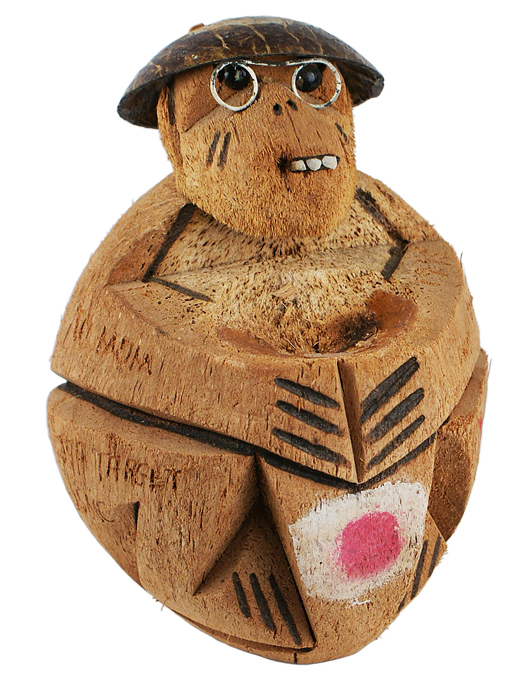 Coconut carved into a caricature of a Japanese soldier by a U.S. Marine on Okinawa in World War II. Price realized: $705. Mohawk Arms Inc. image.

New reality: And the geek shall inherit the earth
Scroll to top