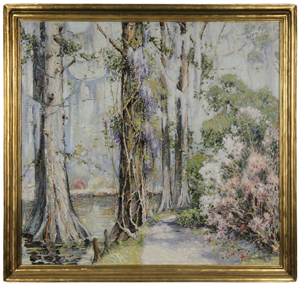 Fans of Alfred Hutty would have traded all of their engravings for this colorful spring oil painting. The painting, 31 7/8 inches by 34 inches, opened at $5,000 and sold to the phones for $67,200. Image courtesy of Brunk Auctions.

ASHEVILLE, N.C. –Alfred Hutty (1877-1954) is best known for his role in the Charleston Renaissance and for his drypoint etchings of Charleston’s architecture, its moss draped trees and African-American residents. His oils on canvas, like At Noon which sold at Brunk Auctions on March 12, are not as well known. The signed painting, 31-7/8 inches x 34 inches, sold for $67,200 (est. $5,000-$10,000), a price that might encourage others with Hutty oils to make a beeline for their nearest auction house.

At Noon, which depicts a Southern landscape with cypress trees in considerably larger than Hutty’s etchings. Hutty’s lush painting graced the cover of the sale catalog and was the top lot of the 750-lot, one-day, $1.53 million sale. All selling prices contain a 20 percent buyer’s premium.

While the single Hutty painting left its estimate far behind, no group did better at demolishing estimates than embroideries. There were 20 embroidery lots from the same private collection with most from late 19th to early 20th century Greece, Turkey and Uzbekistan. Estimates ranged from $300 to $3,000. Thirteen of the 20 exceeded their estimates, some by exceptionally large margins.

The most dramatic was for a fine embroidered silk three-panel cover, 86 inches x 49 inches, from Turkey, possibly in the 19th century. With blue pinwheel flowers encircled by red serrated leaves, the panel opened at $600, its high estimate. Eighteen phones were active with bidders quickly answering the competition. It sold to a persistent phone bidder for $45,600. The next lot, four central Asian embroidered panels, also began at $600, the top of its estimate range. The four, all from the late 19th or early 20th century included one Suzani, two with floral sprays and one probably Greek. The quartet soared to $21,600.

Southern furniture may be undergoing an economic renaissance of its own. Of the 26 lots in the March sale, three were in the sale’s top 10. The leader was a Queen Anne chamber table that descended in the Pringle family of Charleston. The mahogany and cypress table, dating from 1745-1755, South Carolina, had a single dovetailed drawer, molded top, turned legs and pad feet. It was deaccessioned from the Museum of Early Decorative Arts and was pictured in the classic text, The Furniture of Charleston, 1680-1820. The table opened at $10,000 and sold to the phones for $43,200 (est. $10,000-$15,000).

Close behind at $38,400 (est. $12,000-$18,000) was a fine Federal inlaid cellaret, probably from North Carolina or Virginia in the early 19th century. The mahogany and cherry cellaret with elaborate quarter fan, fan, line and bellflowers inlays was illustrated in the 1988 book, Bayou Bend: American Furniture, Paintings and Silver from the Bayou Bend Collection.

The third Southern furniture standout was a fine Queen Anne walnut table attributed to 18th century Virginia. The table with a two-board top, single dovetailed drawer, turned legs and pad feet was acquired by MESDA in 1956 and recently deaccessioned. In overall excellent condition it brought $26,400 on a presale estimate of $2,000-$3,000.

With a fierce, but friendly face that children must have loved was a carved wooden carousel tiger attributed to master carver Daniel Muller (active 1903-1917). Said to have been from the now-closed West View Park, Pittsburgh, the finely repainted tiger sold within estimate for $25,200.

Silver was one of the sale’s longest categories and there was one clear standout: 350 pieces of Tiffany Chrysanthemum pattern sterling flatware. The set was acquired by the family of Henry W. Oliver (1840-1904), founder of Oliver Iron Mining Co., Pittsburgh, Pa. From 1873-1891 silver pieces were added to the mostly monogrammed set. The entire collection sold within estimate for $33,600. A smaller gilt set of 12 forks and 12 soup spoons in Tiffany Chrysanthemum was consigned by an Oliver descendant. It realized $2,640 (est. $1,000-$2,000). 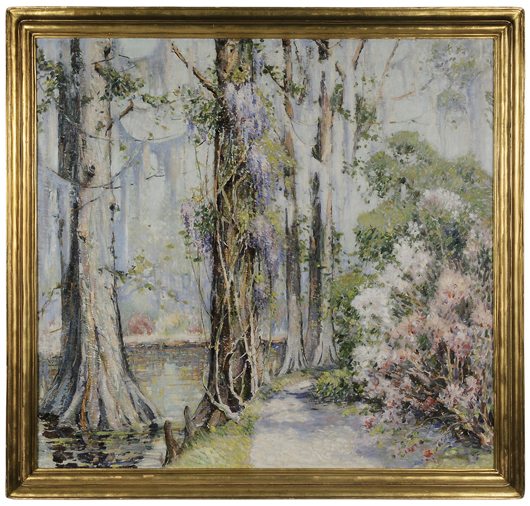 Fans of Alfred Hutty would have traded all of their engravings for this colorful spring oil painting. The painting, 31 7/8 inches by 34 inches, opened at $5,000 and sold to the phones for $67,200. Image courtesy of Brunk Auctions. 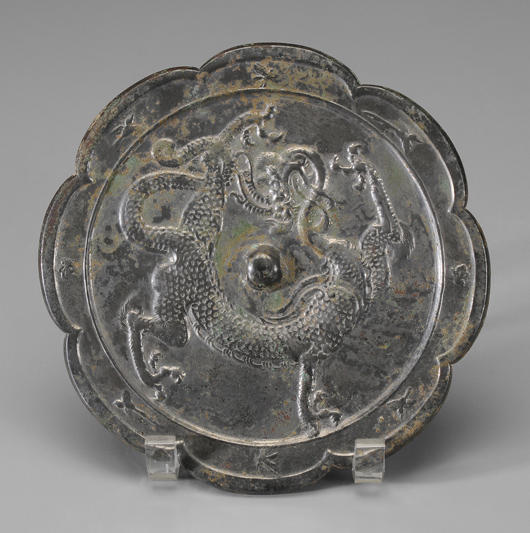 A certificate of authenticity accompanied the 7 3/4-inch Chinese bronze mirror from the Tang Dynasty. At $28,800 it was the star of the Asian lots. Image courtesy of Brunk Auctions. 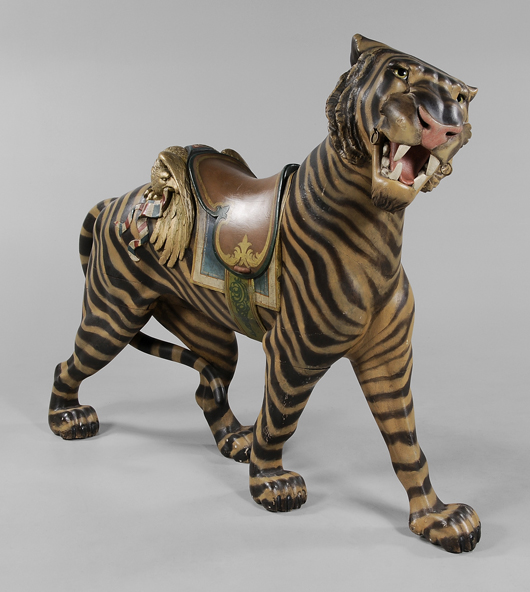 Brunk devoted an entire page in the color catalog to this saddled carousel tiger. The outside row stander measured 54 inches high, 66 inches long and 17 inches wide. It sold for $25,200. Image courtesy of Brunk Auctions. 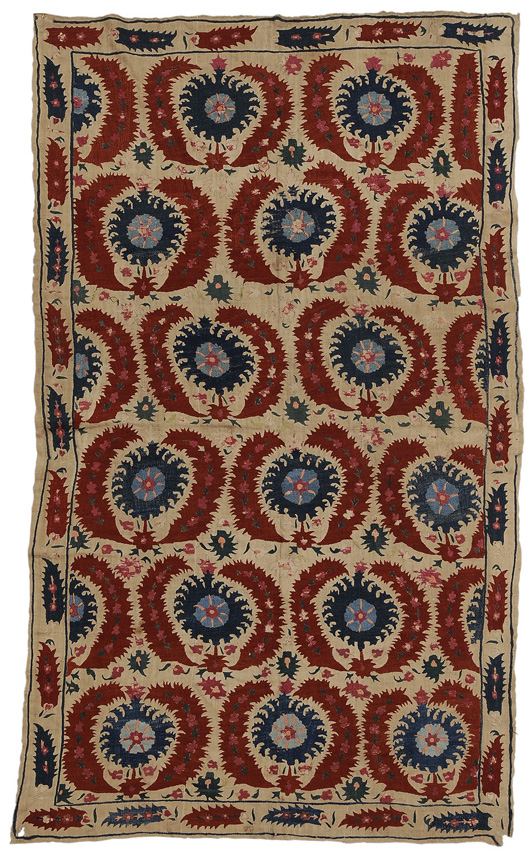 No single lot exceeded its estimate more than this fine embroidered silk cover probably from the 19th century. The cover consisted of three joined panels, 86 inches by 49 inches, with a border of red serrated leaves and central blue pinwheel flowers. It sold for $45,600. Image courtesy of Brunk Auctions.

Stemmed magenta leaves and floral sprays, patterns and borders were contained within the borders of these four panels from the late 19th or early 20th century. The sale moved from a $300 opening bid to a sale at $21,600. Image courtesy of Brunk Auctions. 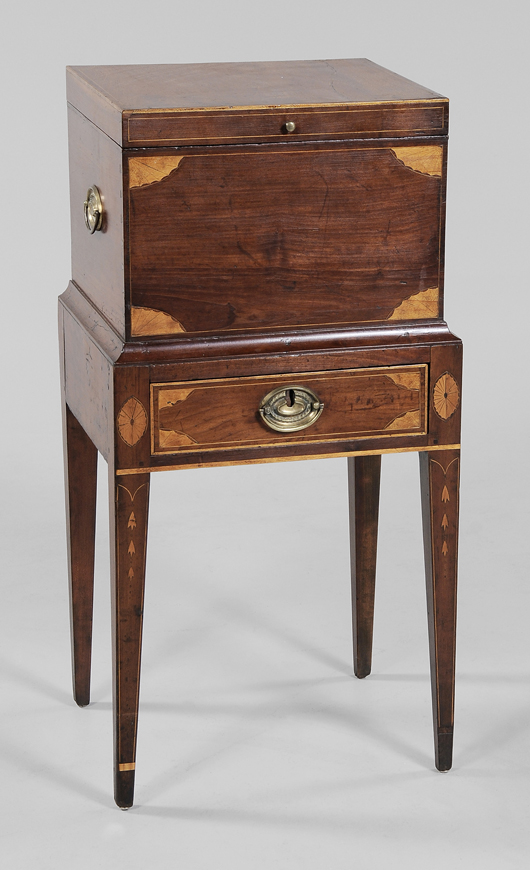 From North Carolina or Virginia in the early 19th century with elaborate inlaid corners and legs, the Federal cellaret sold for $38,400. Its drawer pulls and carrying handles are original. Image courtesy of Brunk Auctions. 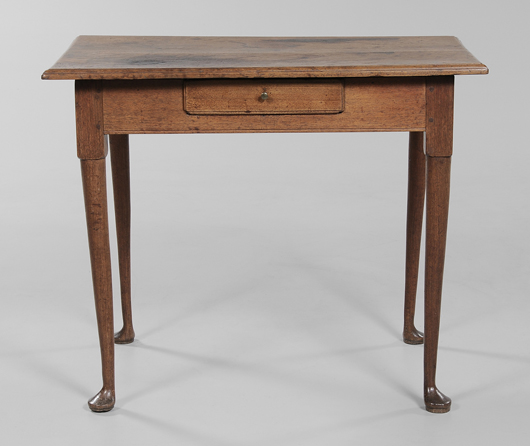 This walnut table was one of 14 lots deaccessioned from the Museum of Early Southern Decorative Arts to benefit the acquisition fund. It has a two-board top, molded edge, single dovetailed drawer on turned legs with pad feet. It raised for $26,400 (est. $2,000-$3,000). Image courtesy of Brunk Auctions. 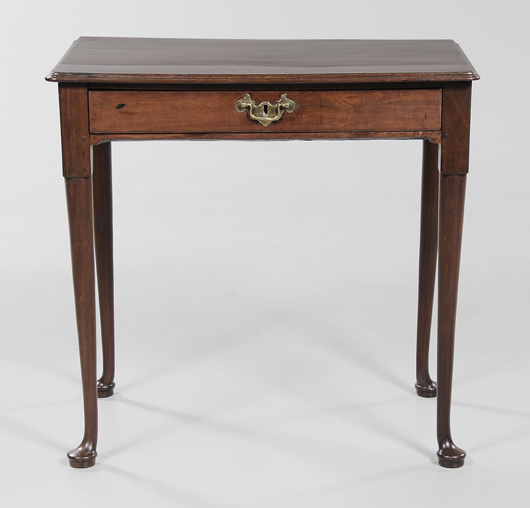 Also deaccessioned from MESDA was this mahogany Charleston Queen Anne chamber table from 1745-1755. In overall excellent condition with turned legs and pad feet, it went for $43,200. Image courtesy of Brunk Auctions. 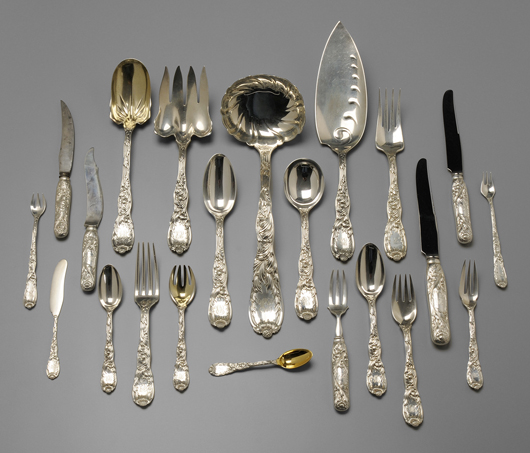 There are 501.28 Troy ounces of silver excluding hollow-handle items in this 350-piece set of Tiffany Chrysanthemum sterling silver flatware. The late 19th-set set sold for $33,600. Image courtesy of Brunk Auctions.