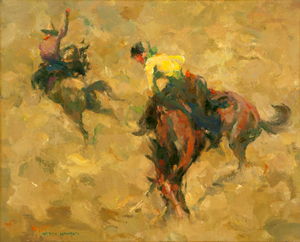 PASADENA, Calif. – Attracting a crowd that has rarely been seen in recent years, John Moran’s California and American Fine Art on Oct. 21 featured works across price points from $2,000 up through $200,000. A lively preview was held at the Pasadena Convention Center, where over 200 collectors and American art enthusiasts gathered and stayed for the duration of the 270-lot sale, while hundreds of registered online, telephone, and absentee bidders were also in virtual attendance. LiveAuctioneers.com provided Internet live bidding.

Landscapes with partial ocean views and beach scenes were an especially popular theme throughout the sale. A sweet, small-scale landscape by prominent California impressionist painter Granville Redmond, executed in 1906 during his study of Southern California coastlines, was expected to earn $15,000 to $20,000; ultimately bringing $20,825. A post-Impressionist work by Franz A. Bischoff, titled Cypress & Sea, depicting the artist’s wife near the Carmel coast, found a buyer for $15,600 (estimate: $8,000 to $12,000). Another smaller work, this one an oil by iconic California watercolorist Phil Dike titled The Red Umbrella carried a conservative estimate of $2,000 to $3,000, which was handily outstripped when competing floor bidders brought the price up to $9,000. Another umbrella-centric work by Philadelphia-based, Russian-born artist Maurice Molarsky was offered for $3,000 to $4,000. Primarily known for his portraiture and figural works, the present example, which realized $5,700, uses a constellation of technicolor umbrellas to draw the viewer’s eye and play with the beachgoer theme. One of two Hawaii-themed works that did exceptionally well at the block, watercolorist Millard Sheets’s painting depicting Diamond Head beach with the Kaiser Hotel in the background surpassed the $8,000 to $12,000 estimate, flying to $42,000 in a matter of moments.

Landscapes across a number of American locales also proved desirable. A dark-toned, larger scale oil on canvas with an unexpectedly canted angle due to the rocky terrain it depicts, Partridge Grounds by prolific New England landscape painter Emile Albert Gruppe found popularity among East Coast telephone bidders, selling for $7,800 (estimate: $7,000 to $9,000). A dreamy, atmospheric landscape by Benjamin Chambers Brown, Mount Lowe and Lupines went home with a dedicated floor bidder for $20,400 (estimate: $12,000 to $18,000). Representative of the artist’s interest in atmospheric effects on landscapes and the subsequent differences in coloration of receding hills and mountains, San Diego-based Maurice Braun’s work Hillside and Valley sold to a California collector for $24,000, within the estimate range of $20,000 to $25,000. Jules Tavernier’s nocturne depicting Mauna Loa Volcano, Hawaii, created a stir among absentee and telephone buyers, selling for $24,000 to a private collector via phone (estimate: $8,000 to $12,000).

Desert landscapes proved fashionable during the auction, as well. Tehuacan, a tonally uniform Mexican landscape centering a solitary figure in the mid-ground by Lockwood De Forest was expected to find a buyer for between $1,000 and $2,000, which was handily achieved when the piece sold for $1,560. A work by Conrad Buff depicting a canyon interior in his iconic style was expected to earn $3,500 to $4,500 – in the end, floor bidders enamored with the oil brought the price up to $13,475. In a City of the Painted Desert (The Hopi village of Mishogonovi, Arizona), an oil on canvasboard by well-known Southwest genre painter Carl Oscar Borg, performed within the $15,000 to $20,000 estimate, earning a final price of $19,200.

Notable among the highlights were a small selection of Western works which captured the eye of bidders across the U.S. – online bidding activity on these lots was especially intense. The first, an intriguing large-scale work by Arizona painter Fritz Scholder, depicting two Indians and a cowboy against a dusty pink/red background, found a new home with an online buyer for $10,667.50 (estimate: $4,000 to $6,000). Competition for an ink and watercolor work depicting a bucking bronco by Southern California artist Olaf Wieghorst was equally fierce; a telephone bidder was the successful buyer, paying $6,600 for the work (estimate: $3,000 to $5,000). Estimated to earn $2,000 to $3,000, Buffalo Run by Yugoslavian-born painter Vladan Stiha realized $8,400. A highly energetic, dust-filled depiction of bronco busters at the Salinas Rodeo was one of the top earners of the evening; the piece by Armin Carl Hansen brought $102,000 at the block (estimate: $40,000 to $60,000).

For more information about bidding or consignment, contact John Moran Auctioneers via email: info@johnmoran.com; or telephone: 626-793-1833. 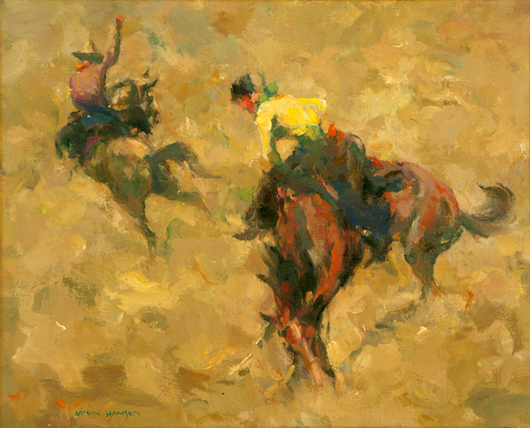 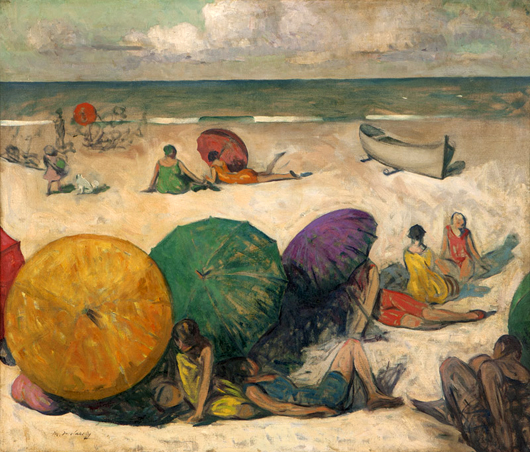 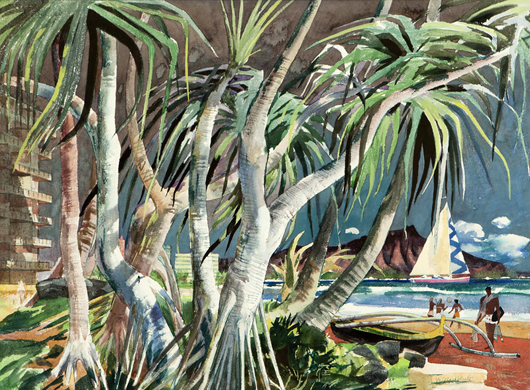 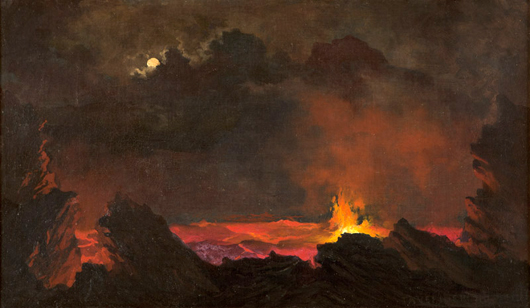 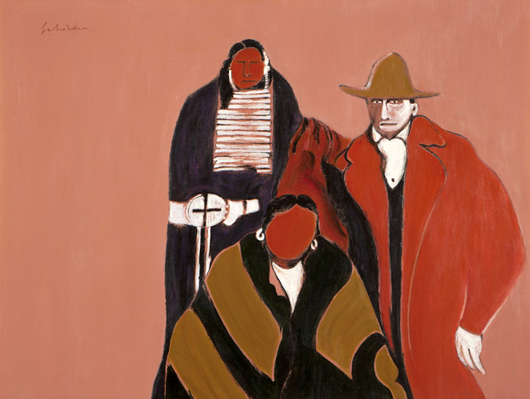 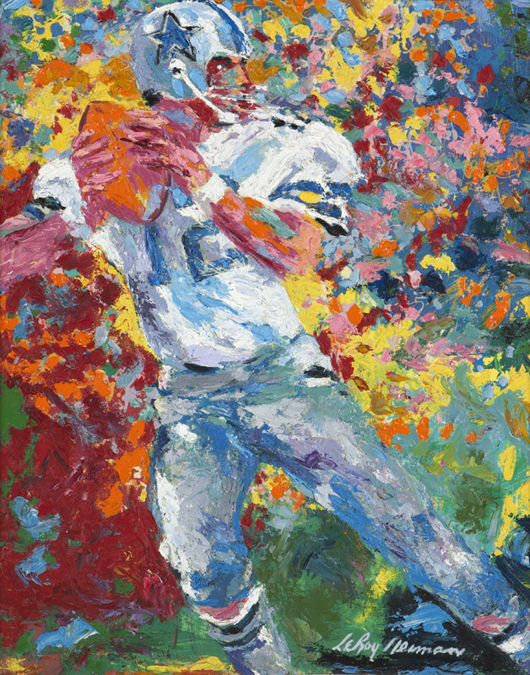