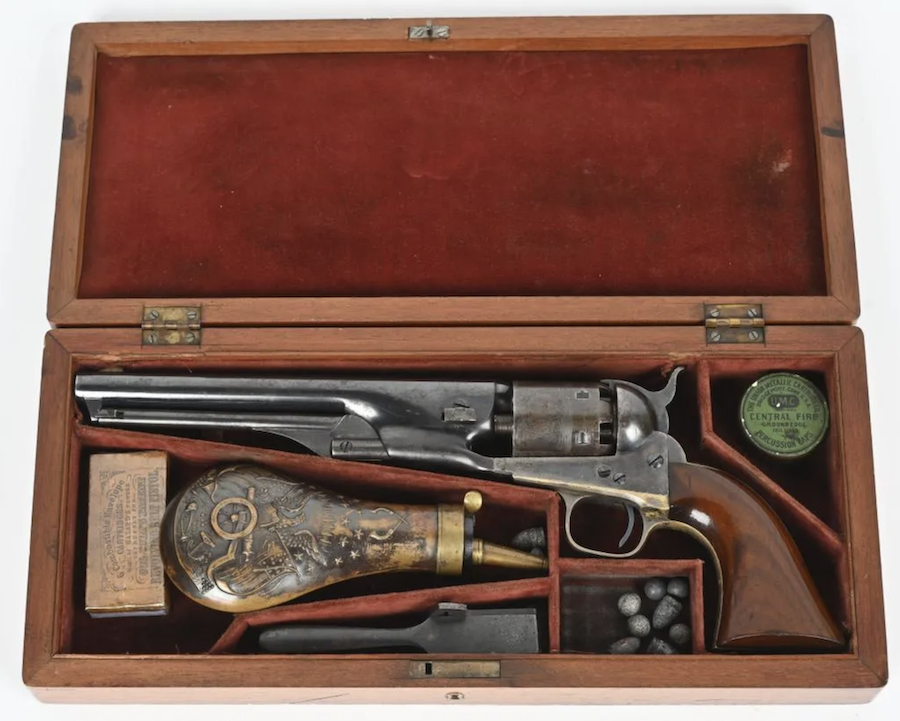 A fine selection of Colts was offered, including coveted productions from the Civil War era. Among them was one of the most sought-after specimens of all Colt percussions, a Model 1861 Navy Revolver (shown at top of this page). One of fewer than 39,000 of its type made by Colt, it came equipped with a powder flask, iron bullet mold, a wrapped 6-round packet of Colt’s combustible cartridges, and a tin of UMC percussion caps. Housed in a compartmented, velvet-lined case, it easily surpassed its $10,000-$15,000 estimate to reach $18,600. 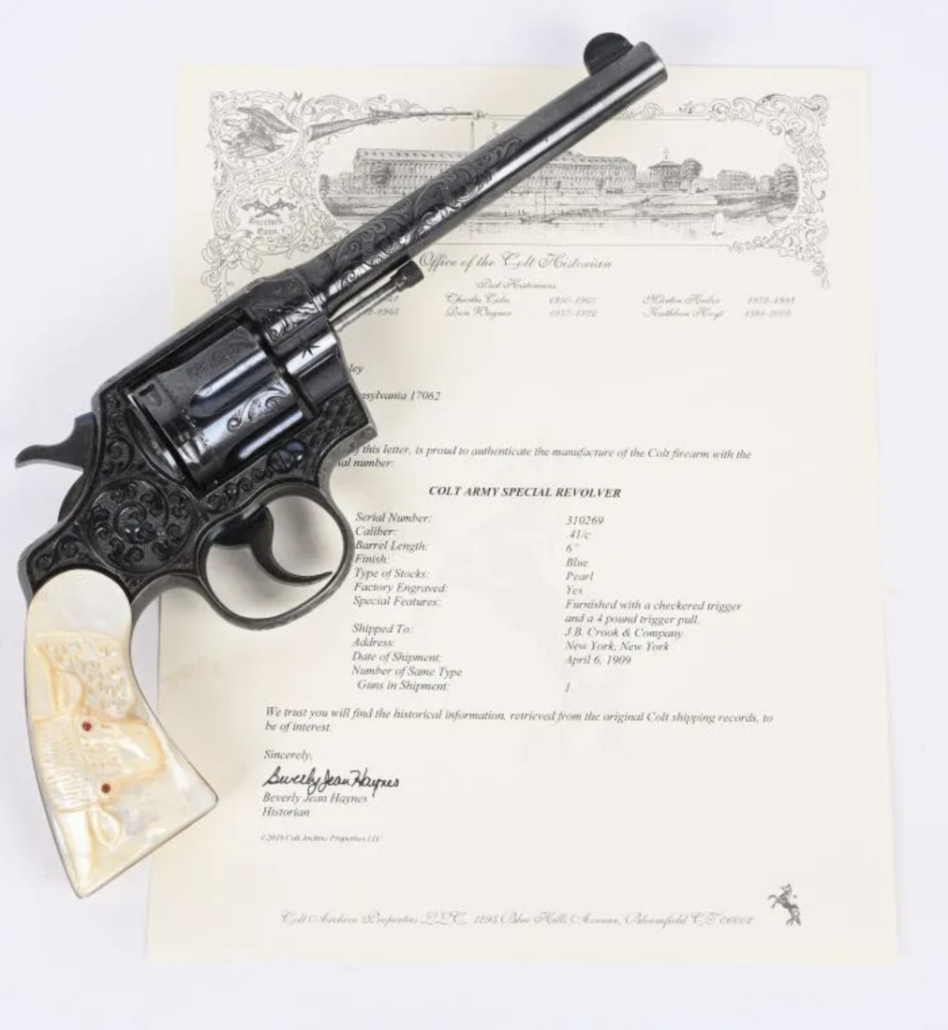 Pearl-handled Colt .41-caliber Army Special Revolver sent in 1909 as a shipment of one to J.B. Crook & Co., New York, with engraving by Cuno Helfricht’s shop that includes a carved steer’s head with ruby eyes on right side of grip. Special features include a checkered trigger and 4-pound trigger pull. Sold for $19,800 against an estimate of $8,000-$12,000

The top-selling Colt was a pearl-handled .41-caliber Army Special Revolver, furnished with a checkered trigger and 4-pound trigger pull, which was sent in 1909 as a shipment of one to J.B. Crook & Co., New York. “What made this gun extra special was the engraving from Cuno Helfricht’s shop. When this gun was produced, Helfricht – a master engraver – was the head of Colt’s engraving shop. Any Colt firearm with artistry from his shop is likely to command a premium price, just as the Army Special in our sale did,” said Miles King, co-owner of Milestone Auctions. The artwork on the gun to which King referred features a bas-relief carved steer’s head with ruby eyes on the right side of the gun’s grip. Against an estimate of $8,000-$12,000, the coveted Colt achieved $19,800. 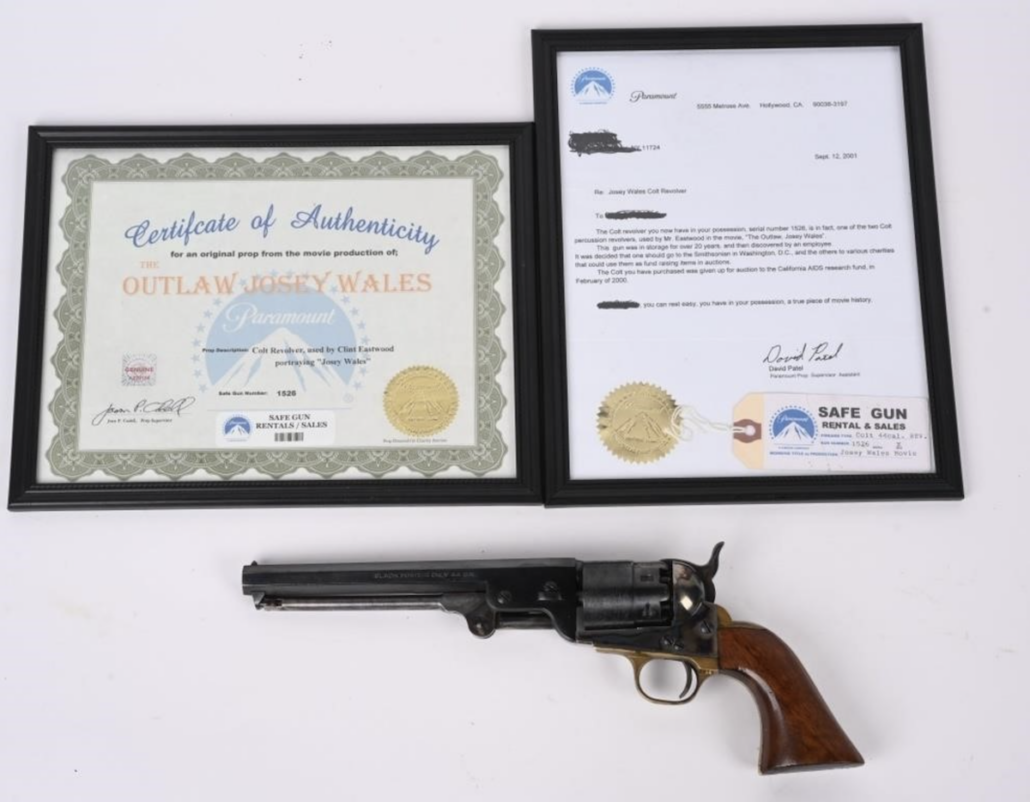 Replica Colt 1851 Navy .44-caliber gun used by Clint Eastwood in the classic Western film ‘The Outlaw, Josey Wales.’ Accompanied by two certificates from Paramount Studios identifying the gun by serial number and attesting to its having been used by Eastwood. Sold for $17,400 against an estimate of $5,000-$10,000

Another sought-after Colt was actually a prop firearm with a formidable Hollywood connection. One of a pair of .44-caliber Colt 1851 Navy percussion replica guns used by Clint Eastwood in the 1976 film The Outlaw, Josey Wales, it was accompanied by two signed certificates from Paramount Studios. One of the certificates identified the gun by serial number and attested to its having been used by Eastwood in his starring role in the classic Western. It also noted that the companion gun is now part of the Smithsonian collection in Washington, DC. The example offered by Milestone sold for $17,400 against an estimate of $5,000-$10,000.

An Old West rarity that attracted considerable interest was an 1880s J.S. Collins & Co. (Cheyenne, Wyo.) rig consisting of a single-loop cartridge belt to accommodate either .44- or .45-caliber shells, and a matching holster to fit a Colt SAA revolver. “The leather work of J S Collins is very highly regarded – some say it was the finest of its time,” King said. “They were known for being the saddle makers to Buffalo Bill Cody and Theodore Roosevelt, who also owned Collins chaps and wore a Collins holster while running his Elkhorn Ranch in North Dakota. We know this from an 1883 photograph of Roosevelt taken on his Dakota property.” Milestone auctioned the rig for $8,400 against an estimate of $3,500-$5,000. 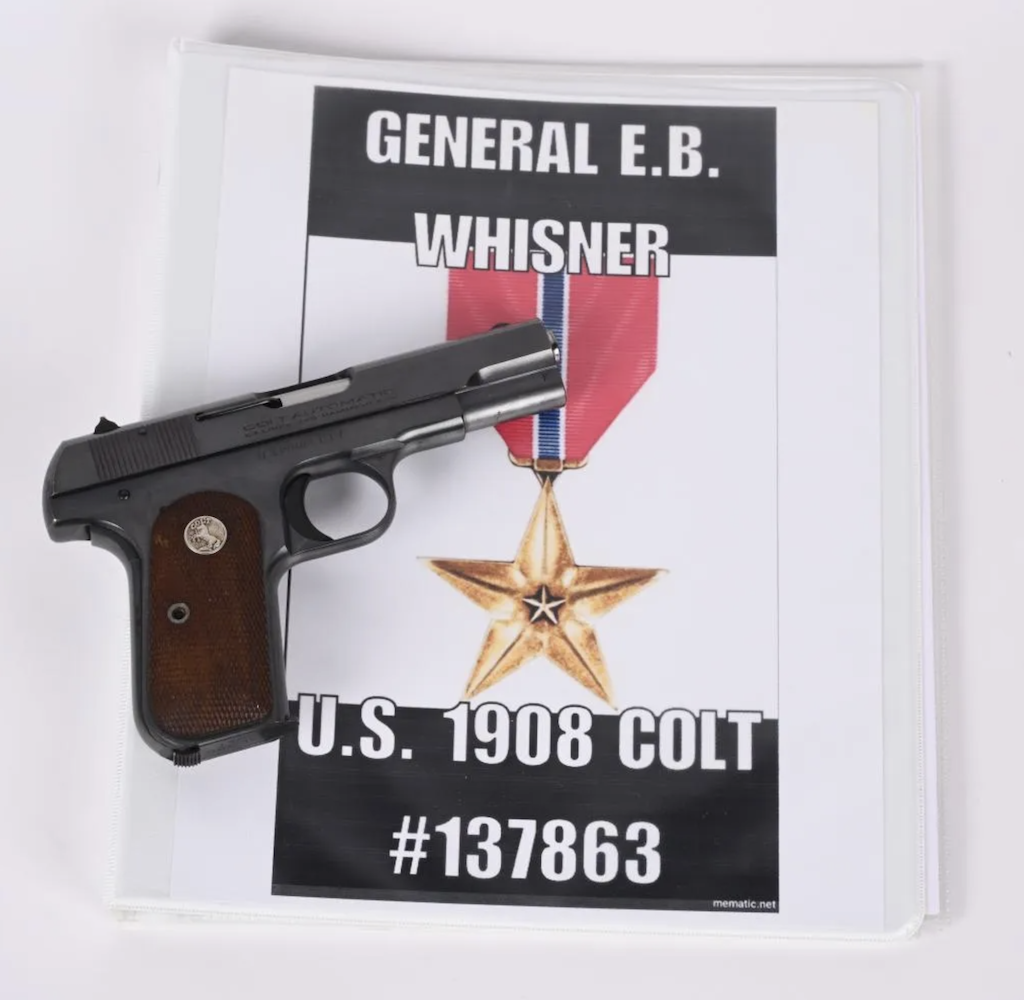 Colt Model 1908 .380 manufactured in 1945 and issued near the end of World War II to the late Brigadier General Emons Bertram Wisner, a career officer with the US Army Signal Corps. Sold within estimate for $5,880

The Colt mystique continued into the category of wartime military arms. One noteworthy lot was a Colt Model 1908 .380 manufactured in 1945 and issued near the end of World War II to the late Brigadier General Emons Bertram Wisner of the US Army Signal Corps. Its markings include the Colt rampant pony behind the slide serrations, a “VP” proof on the left side of the trigger guard, a crossed-cannons cartouche behind the safety, and “U.S. PROPERTY” on the right side of the frame. The pistol sold within estimate for $5,880. 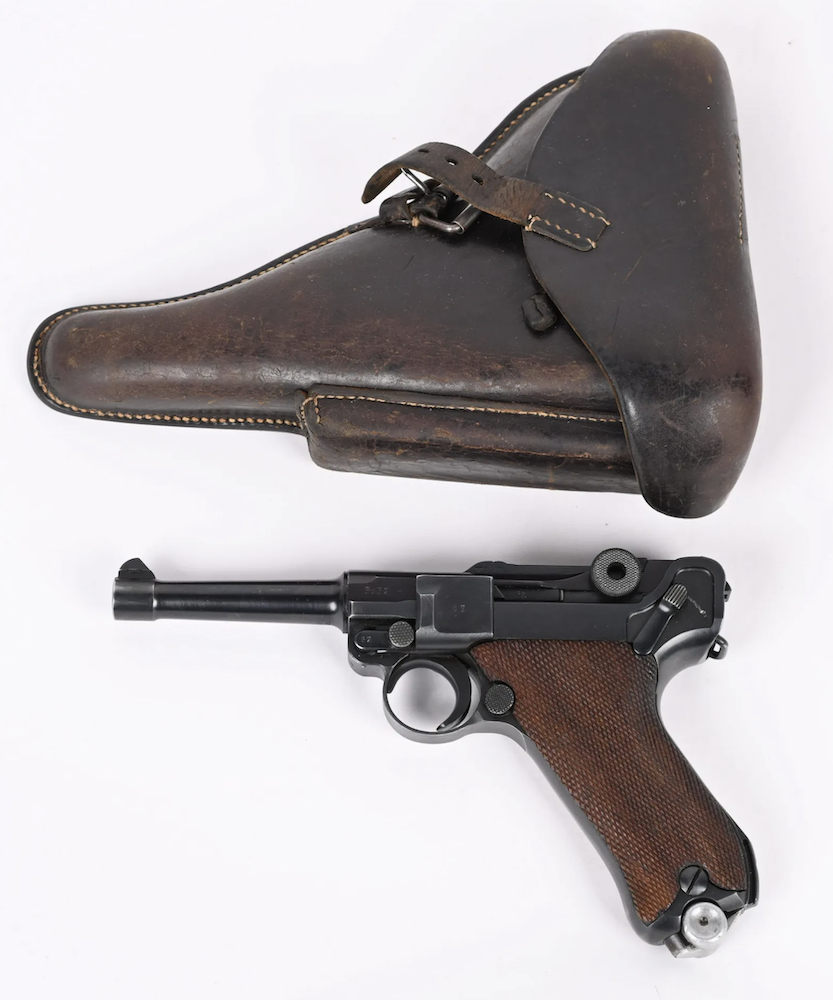 As the company slogan states, Mausers are “copied by many, duplicated by none,” and nothing gets military arms collectors more excited than the opportunity to own a World War II-era weapon made by the fabled German manufacturer. Of the two dozen Mausers entered in Milestone’s June 17-18 auction, two landed in the top 10. One of them was a World War II 35mm Para P-08 Luger, dated 1940 on its chamber, with “Code 42” marked on the toggle and Eagle 655 inspection marks. Together with its matching rig and two matching magazines, it sold for $8,100 against an estimate of $3,500-$5,500. The second Mauser, an elusive cone-hammer 7.63-caliber Model C-96 Broomhandle pistol, was made in 1897, the model’s second year of production. It performed impressively, selling for $10,800 against an estimate of $4,500-$6,500. 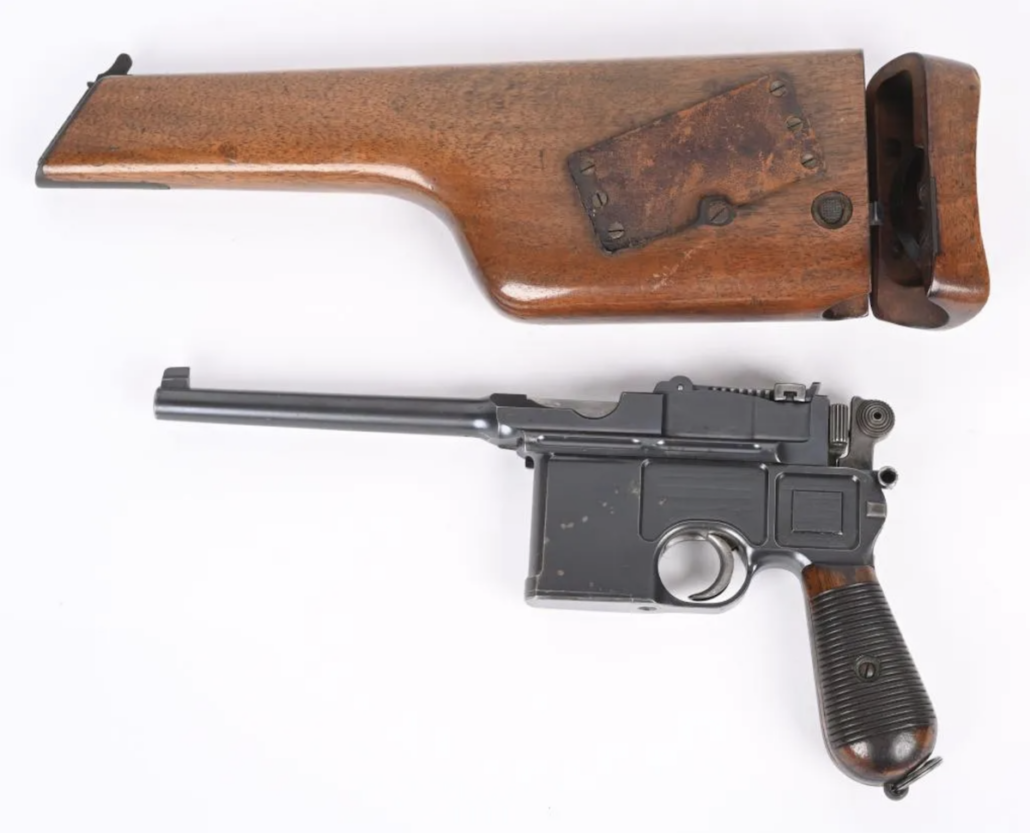 Fine Mauser cone-hammer Model C-96 Broomhandle pistol made in 1897, the model’s second year of production. Matching-number wood shoulder stock with attached leather belt loop. Sold for $10,800 against an estimate of $4,500-$6,500

Prior to the auction, previewers were drawn to an exotic circa-1893 Gaulois 8mm 2-3/16 caliber push pistol with a gutta percha grip. It was manufactured by Francaise d’Armes et Cycles of Saint-Etienne, France, and described on its (included) colorful pictorial box as a “Pistolet de Poche a Repetition Automatique,” or Automatic Repetition Pocket Pistol. Accompanied by a paper instruction sheet and 25 empty rounds of ammunition, the curiously designed small arm sold above its high estimate for $5,640. 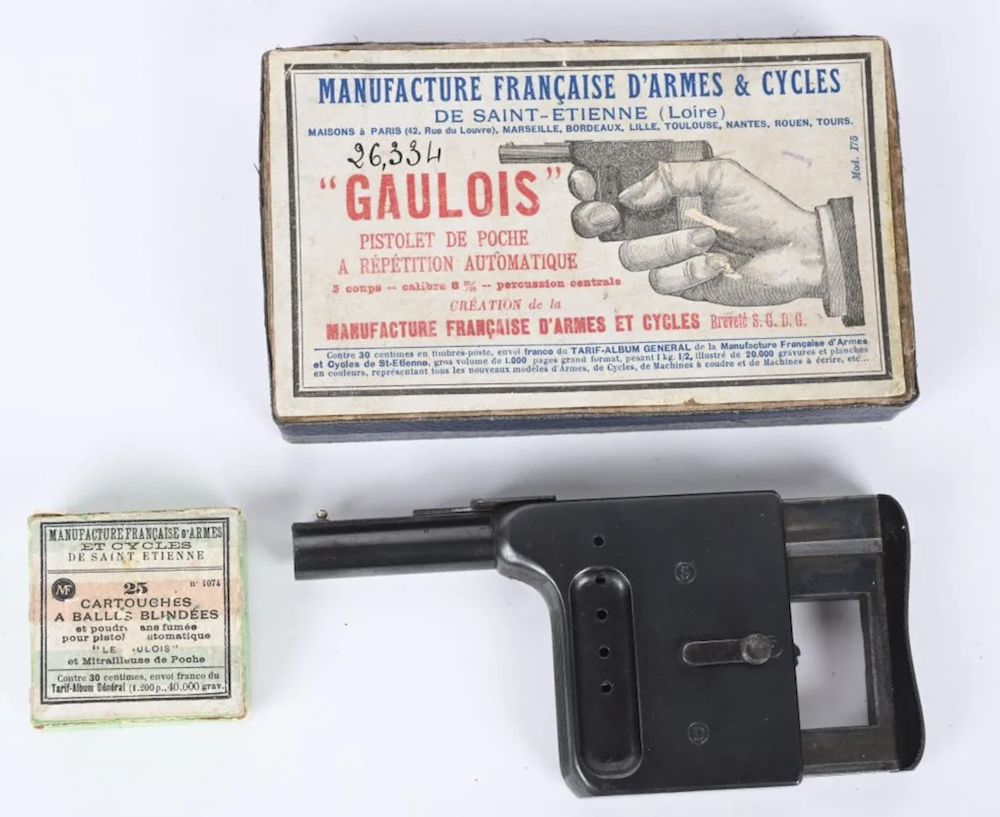 To learn more about consigning an entire collection or individual, high-quality items to a future sale conducted by Milestone Auctions, please call 440-527-8060 or email info@milestoneauctions.com. All enquiries are kept strictly confidential, with no obligation whatsoever. Online: www.milestoneauctions.com 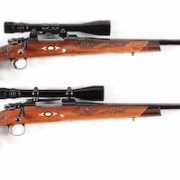 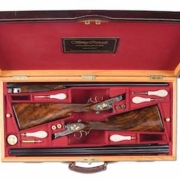 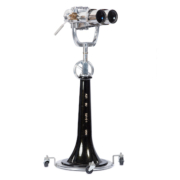 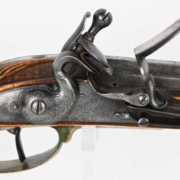 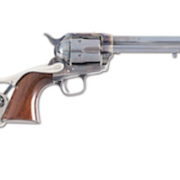 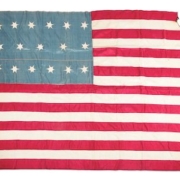