BOULDER, Colo. – Artemis Gallery welcomed a contingent of new collectors to their Jan. 18-19, 2017 auction of classical antiquities and Asian, Pre-Columbian and ethnographic art. The 454-lot sale – the second-best in the company’s history, both in terms of the monetary total and the number of items sold – achieved a strong 65% sell-through rate, with intense competition on several pieces. Internet live bidding was facilitated by LiveAuctioneers.

“Sixty-five percent is a very high sell-through rate for categories that are so specialized. We were absolutely amazed that there was so much interest across the board and that there were so many new bidders,” said Artemis Gallery Executive Director Teresa Dodge. “I think much of this can be attributed to our reputation for scrupulous research and our ironclad guarantee that everything we sell is authentic and unquestionably legal to purchase.” Dodge also pointed out that the vast majority of items in the sale came with distinguished private or museum provenance, which she said “instills bidder confidence.”

Pre-Columbian collectors were ready to pounce on an extremely rare bone carving from the Chavin culture of northern coastal Peru. Dating to circa 1400-400 BCE, the artwork replicates a jaguar’s paw, with pointy turquoise claws and a double-headed serpent design around the wrist. Estimated at $2,500-$3,500, it opened at $1,200 and was hotly pursued to $13,145. 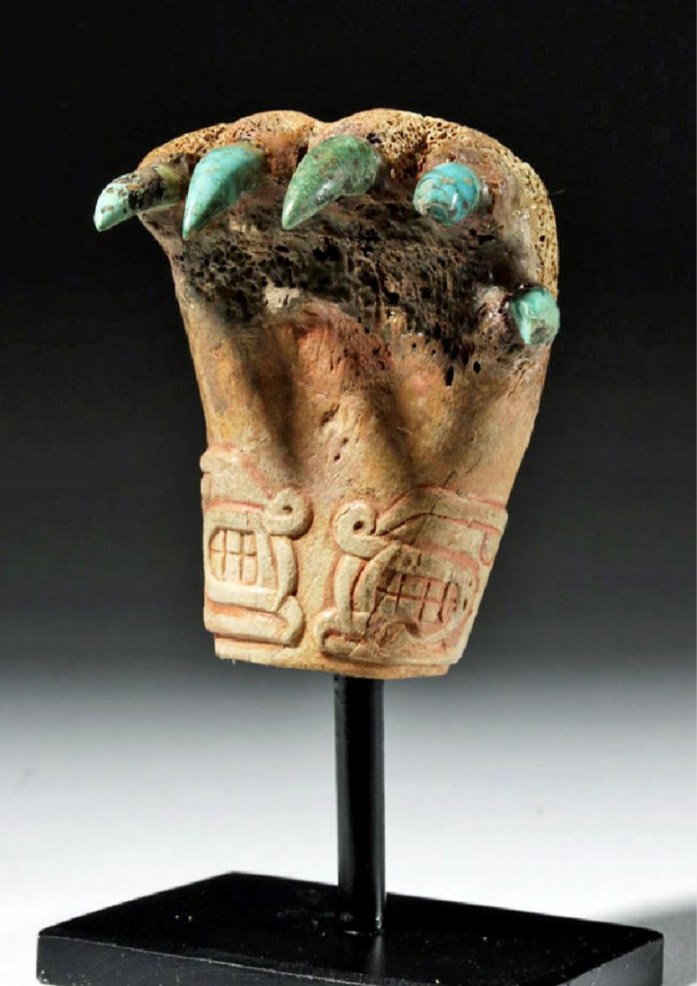 Also reaching $13,145 was a superb plaster mummy bust of a young man from the Romano-Egyptian period, 1st century BCE to 1st century CE. Impressively sized (14in wide by 15¾ inches high), the artwork would have been created as a funerary monument for an elite individual. To the Roman viewer, its sensitively molded facial features might have suggested a similarity to a youthful god, perhaps Apollo. 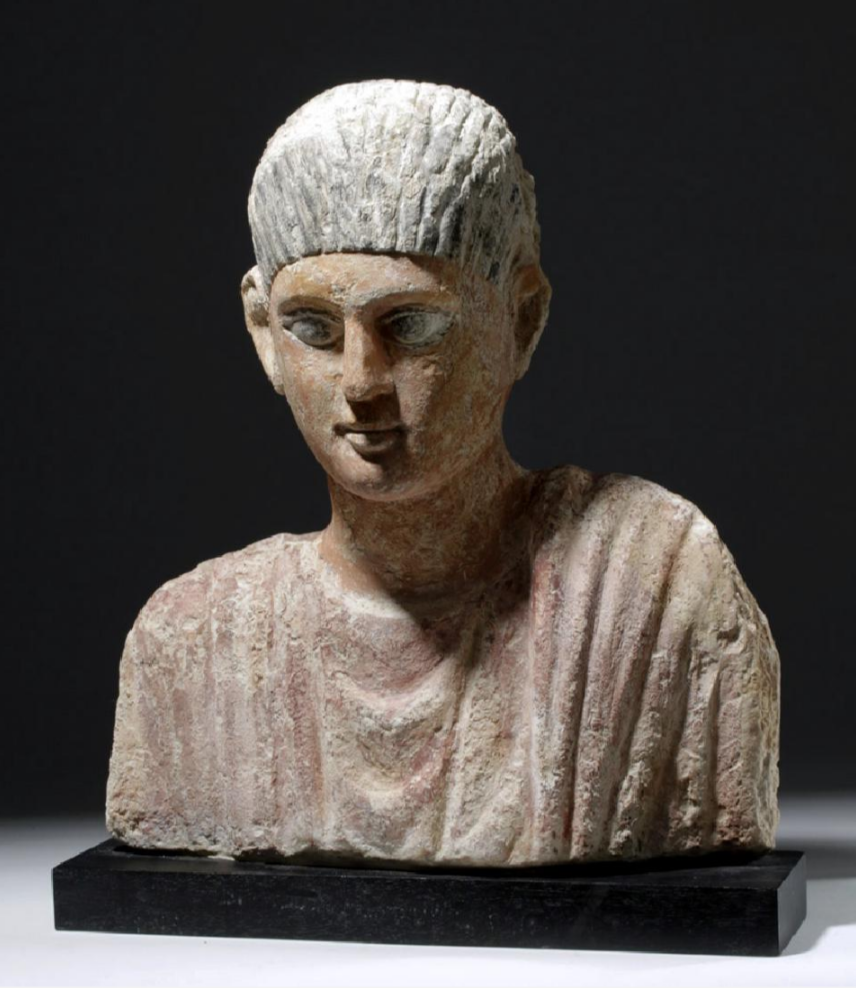 One of the most frequently viewed items in the online catalog was an Egyptian Middle Kingdom tomb model of plaster and wood depicting a brewery and bakery, with figures of two men sealing beer jars and a third figure kneading dough. Formerly held in a New York private collection, the fascinating ancient relic was claimed by a new owner for $7,170. 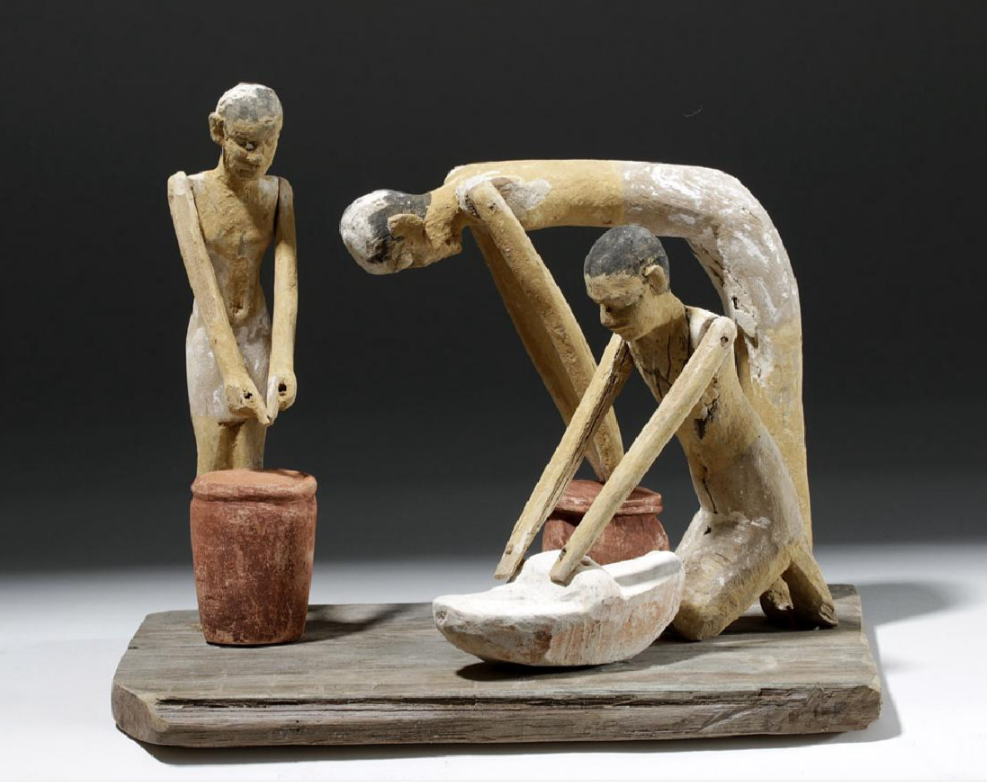 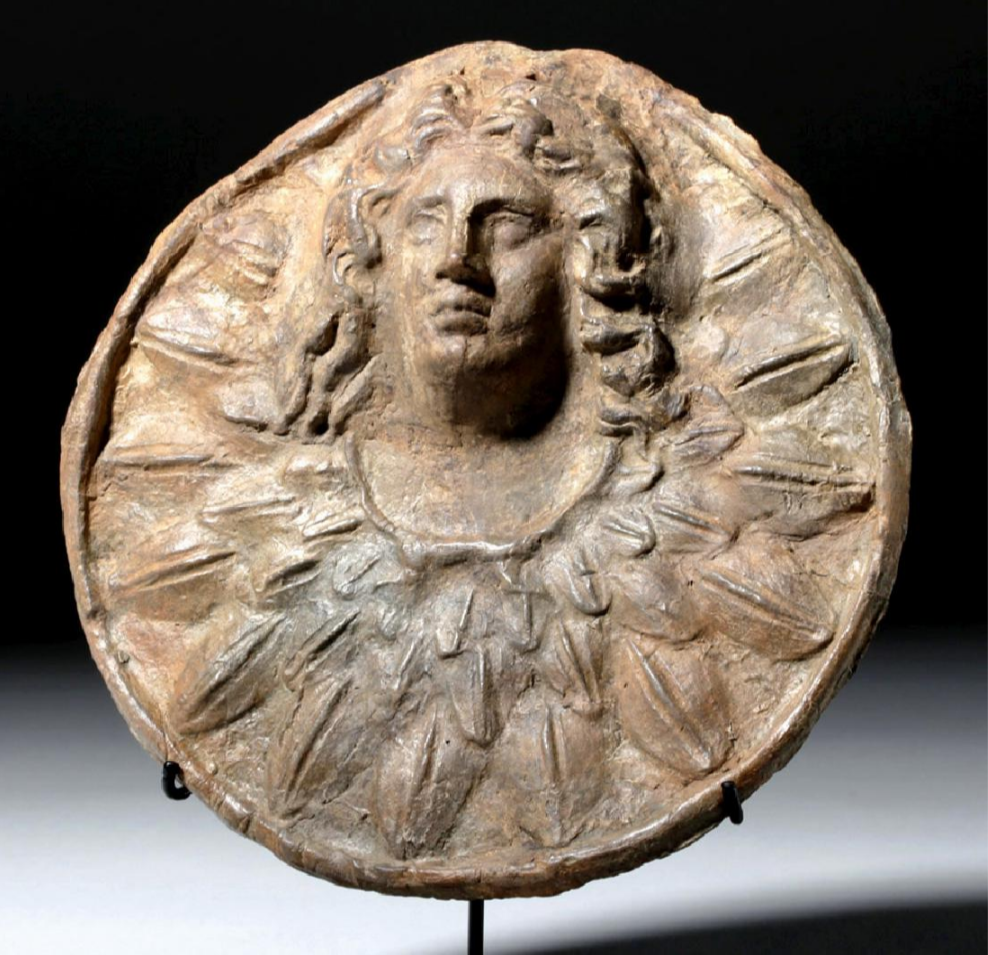 The top lot of the sale was a 39-inch-high Apulian (Magna Graecia, southern Italy) red-figure amphora dating to circa 330-300 BCE and attributed to A.D. Trendall’s Virginia Exhibition Painter. Profusely decorated with rival warriors, one on horseback; a female bust, floral elements and other fine iconography, this vessel would have been “a highly prized piece throughout the classical world,” Dodge said. It was bid to $43,020. 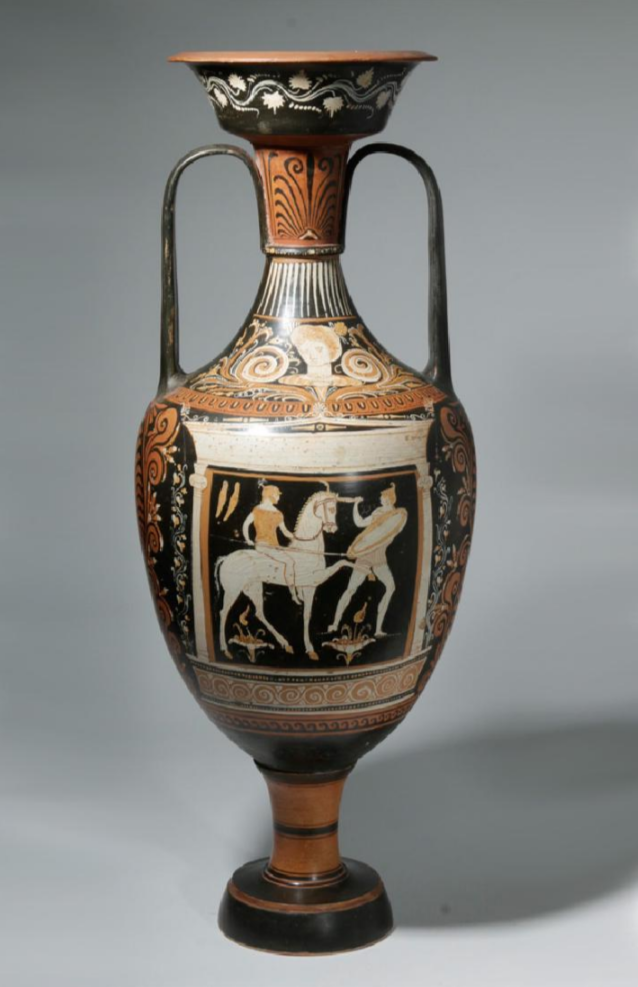 The highly select offering of Asian art was led by a late-19th-century CE Tibetan gilt-bronze sculptural tableau of citipati – male and female skeletal protector deities who dance wildly within a halo of flames. The object of fierce bidding, the lot sold for $11,355. 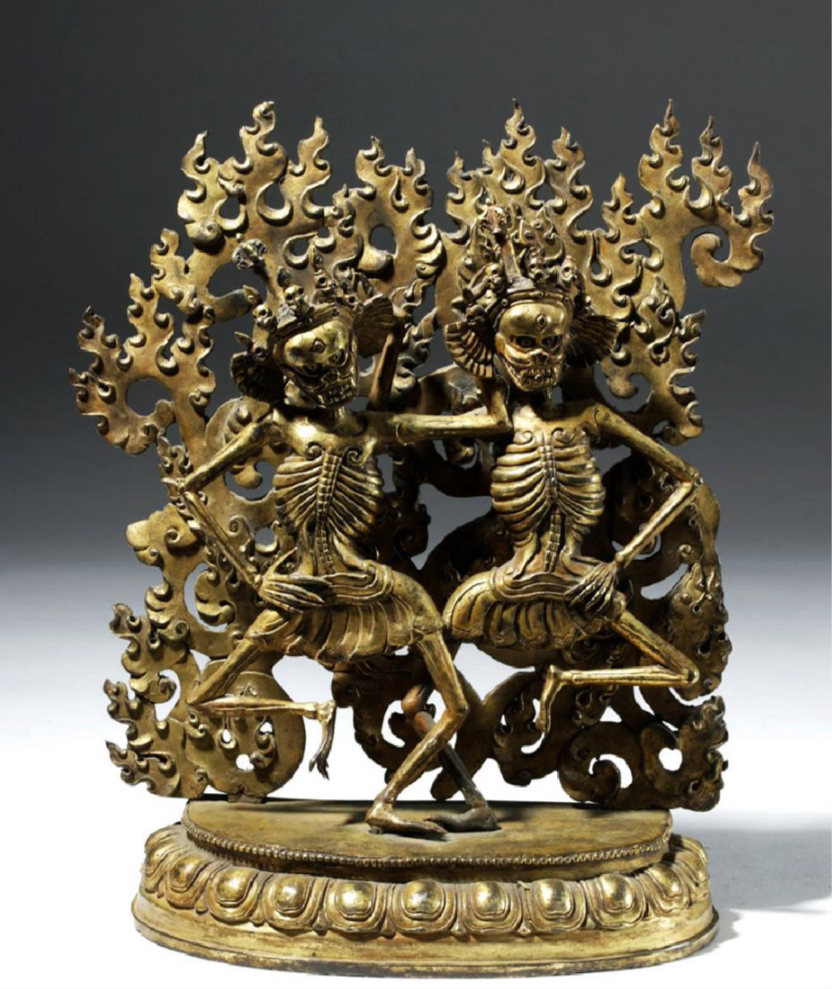 Also noteworthy among the Asian-art lots was a beautiful 12th-century Khmer Empire (Angkor culture) lost-wax cast-bronze figure of the Hindu goddess Lakshmi, wife of Vishnu. Standing on a small plinth and adorned with a wealth of necklaces, bracelets, anklets, earrings and a regal headdress, the fastidiously detailed figure was created in a manner that would make it visually interesting from all angles. Estimated at $2,000-$3,000, it rose to $5,079. 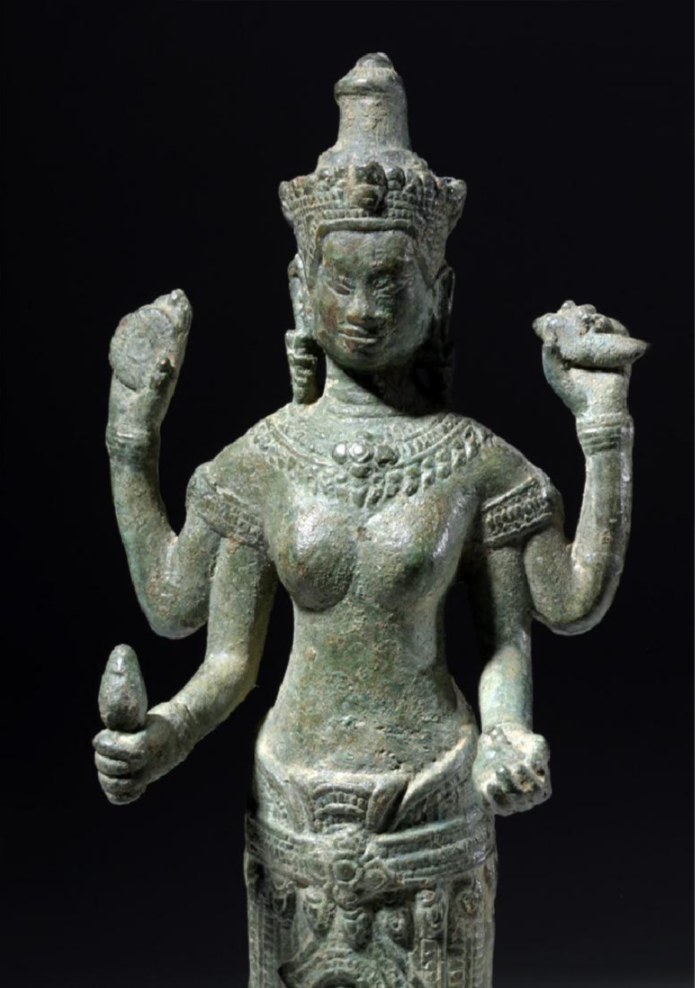 Another category that drew an active, multinational bidding contingent was ancient jewelry. Among the highlights were a museum-quality Viking silver chain with an amulet shaped as Thor’s Hammer (shown below), $5,378; and a Roman 14K gold ring with a garnet intaglio of Minerva, $2,689. 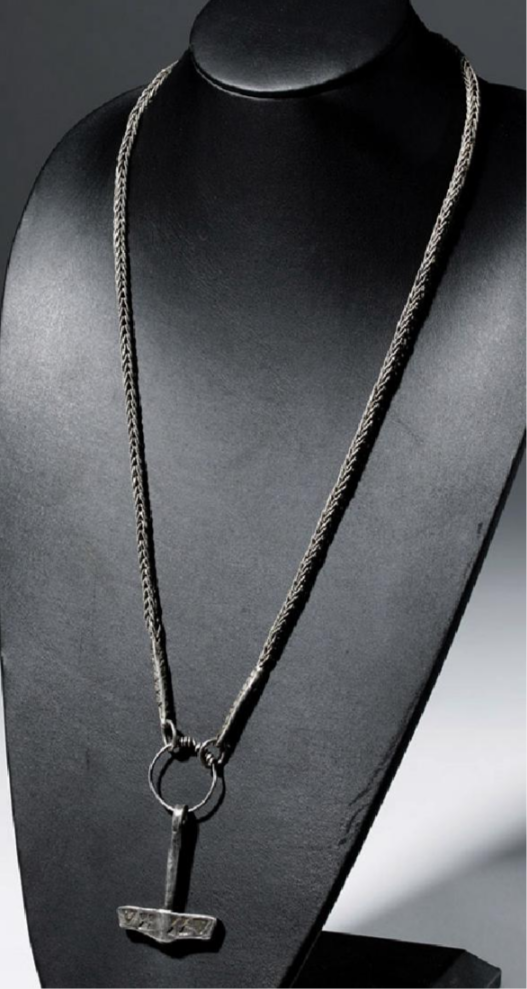 To discuss consigning to a future Artemis Gallery auction, call Teresa Dodge at 720-890-7700 or email teresa@artemisgallery.com.

View the catalog and full prices realized on