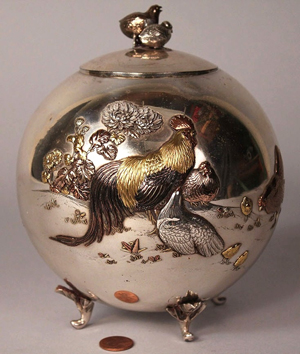 The top-selling lot was a Meiji period Japanese silver tea caddy, decorated with applied roosters and chickens in assorted shades of gold plate. Measuring 7 inches tall and 34 oz. troy, it soared past its $1,500 top estimate to reach $32,200, powered by competition from several phone and internet bidders (all prices quoted include a 15% buyer’s premium). There was heavy bidding on other Asian lots, particularly Chinese porcelain objects dating from the early 20th century Republic era, most of it from a single-owner collection. Porcelain from that period is characterized by delicate enamel decorations inspired by paintings on paper, and is more likely to be artist-signed than Chinese porcelain from other periods. Prices on Early Republic porcelain objects have surged in just the last couple of years as they have become increasingly sought-after, particularly in China.

Among the porcelain lots were a pair of 28-inch wall plaques depicting human figures, $10,580; a pair of signed baluster form vases decorated with delicate flowering branches, $8,280; and a pair of signed bowls with butterfly and flowering branch decoration, $2,990. Other high-selling Asian lots included a 41” x 46” lacquered panel with applied ivory and hard stone carvings, $9,890, an early 20th century red coral necklace and earring set, $3,450; and an 18-inch-high ivory and cloisonné figure of Quan Yin, $1,725.

“This sale clearly shows the effect of more Asian buyers entering the market, with a desire to buy, money to spend and technology that allows them to access international sources,” said company president John Case.

As usual at Case, Southern decorative arts were also in high demand. A large redware jar with manganese splotch and sine wave decoration, attributed to the Cain Pottery of East Tennessee, sold for $12,650 (est. $7,000-$9,000), while a later stoneware advertising jar with the word “Nashville” misspelled and a restored crack brought $805 (est. $400-$500). A Georgia huntboard from the Gainesville area with square tapered legs served up $7,705; a Tennessee cherry sugar chest with turned legs stashed away $5,290; and a rare 3-drawer Kentucky cherry work table competed to $2,070. A quilt in the Whig’s Defeat pattern, signed and dated 1852 with a Tennessee history, brought $1,092 despite some fabric losses caused by deterioration of black dyes.

Three of the most actively pursued art lots in the sale were portraits. A miniature watercolor on ivory painting of a little boy holding a book skyrocketed to $8,740; and an unsigned antebellum portrait of a young Alabama man, William Hardie Timmons of the Huntsville area, brought $2,415 (est. $1,200-1,800). The elaborate frame was not original. There was serious local interest in a folk art watercolor portrait of a little boy holding a miniature hunting horn, with his dog at his feet. The painting was identified on the back as Timothy Chandler, grandson of the founder of Sevierville, Tennessee, and was accompanied by the horn. An East Tennessee institution won it for $3,680 against an $1,800-$2,200 estimate. A portrait of prominent New York merchant Henry White by Henry Peters Gray (American, 1819-1877), after the original by John Singleton Copley, realized $2,415; but a portrait of his wife Eva, attributed to John Wesley Jarvis, went unsold (est. $2,000-$3,000).

A late-19th-century painting of a woman and little girl in a library by Jan F. P. Portielje (Dutch, 1829-1908) led a collection of European art which drew multiple phone bidders from that continent.  It earned $18,400 (est. $12,000-$14,000), while a canal scene signed Spohler and attributed to Johannes Franciscus Spohler (Dutch, 1853-1894) achieved $14,375. A landscape with woodsman and children by Conrad Wimmer (German, 1844-1905) harvested $3,450; and a genre scene of a man examining his stamp collection by Curt Bruckner (German, b. 1896, d. -?) doubled its high estimate to earn $2,300. Two portfolios of early 20th century colored design plates by E. A Seguy, titled “Bouquets et Frondaisons” and “Papillons,” competed to $3,450 and $3,680 respectively. Two reverse-painted pictures on glass, one a harbor scene and the other a winter landscape, by recently-deceased American folk artist Milton Bond brought $632 and $690 respectively.

Historical material was also well received. A photograph of President William Taft with his Supreme Court justices, signed by all pictured, gaveled down at $2,990, and a lot of five autographed calling cards including one signed by Susan B. Anthony, rallied to $1,150. It contained a handwritten inscription from Anthony reading “Equal rights for all- women included – is the basic idea of a republic.”

“Gold and silver buying stores are popping up all over these days, but you can often do just as well or even better selling at auction, especially if the pieces have significant aesthetic or historical value,” noted Case. “Nearly a third of the lots in this auction were gold or silver, and demand for sterling or gold stayed consistently strong throughout.”

Other highlights from the sale included a pair of 19th century Paris porcelain vases in a red and black palette, painted with classical busts, $2,185; an 18th century tavern table from The Old Ordinary in Hingham, Massachusetts, $862;  a 20th century Judith Leiber rhinestone minaudiere purse in the form of a watermelon, $1,725; and a 19th century ivory fan hand-painted with mythological scenes, $2,990 (est. $600-$800).

“This sale drew the strongest bidder participation to date,” said Case. “We had over 200 people in the gallery, another 100 or so participating by phone and absentee bids, and about 1,300 people bidding online who placed over 1,600 bids (via LiveAuctioneers.com). We were also encouraged that out of 608 lots in the sale, there were only a handful of passed lots, the fewest number in recent memory.” 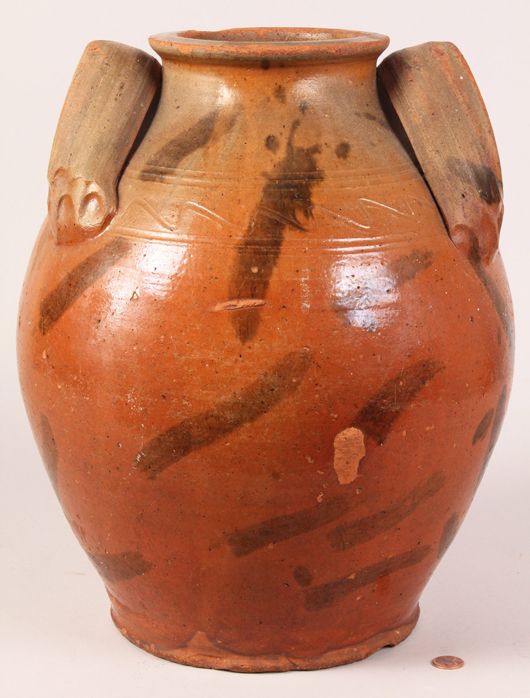 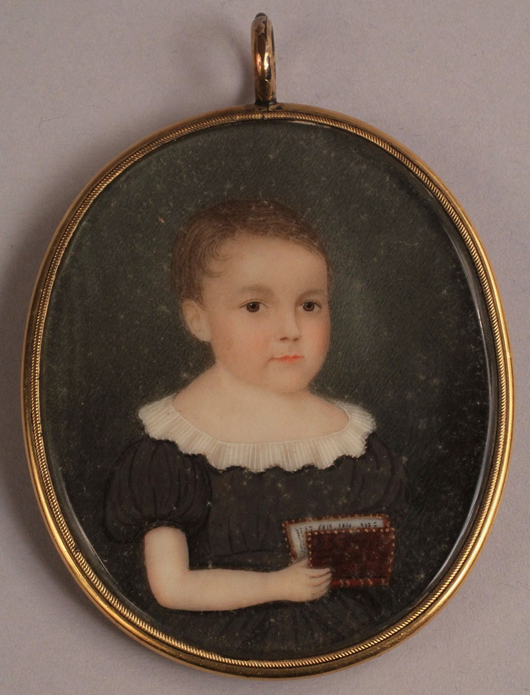 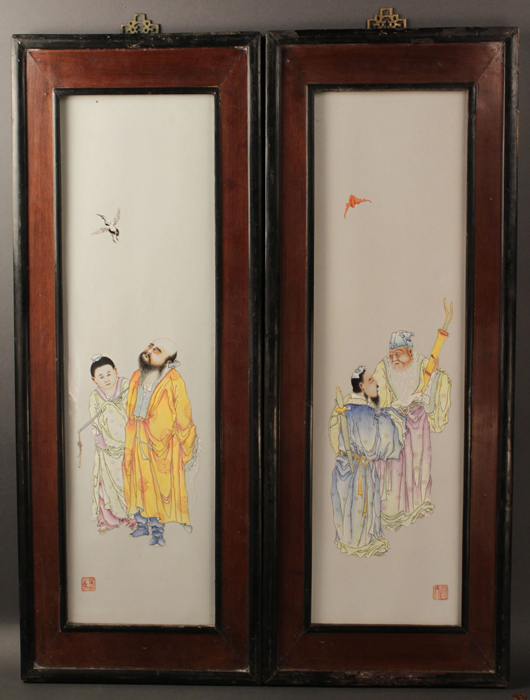 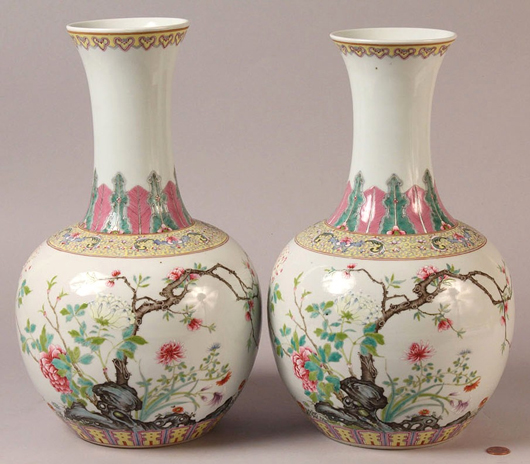 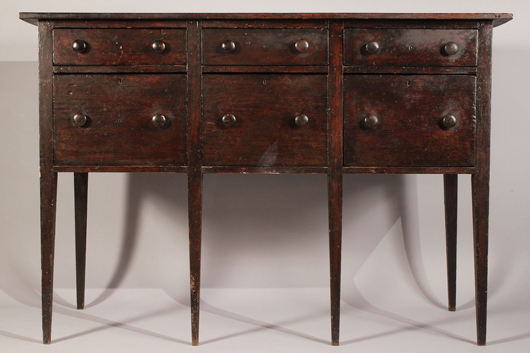 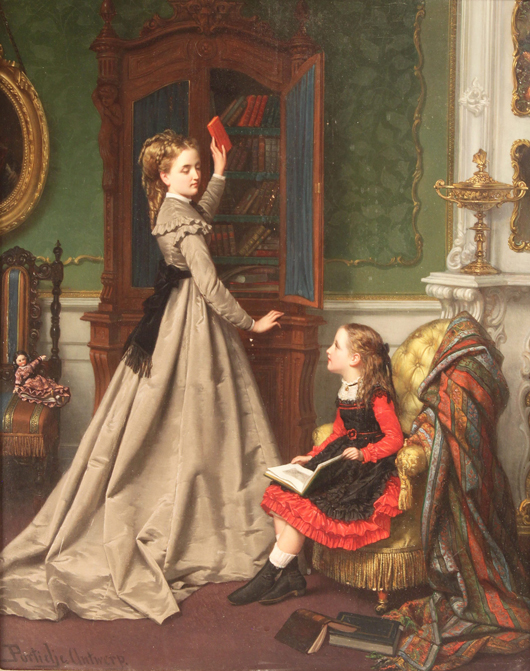