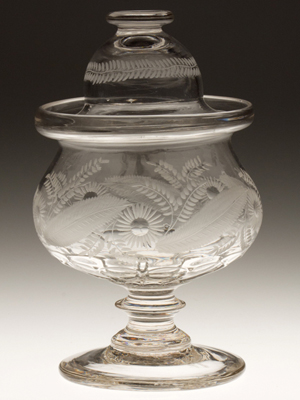 MOUNT CRAWFORD, Va. – A pattern-molded and engraved sugar bowl and cover, attributed to Bakewell, Page & Bakewell and made circa 1820-1835, soared to $8,625 at an auction dedicated to 18th and 19th century glass and lighting held May 19 by Jeffrey S. Evans & Associates. The bowl and cover were the top lot of the 882 items sold.

The firm also held sales on back-to-back days in April. The April 28 event featured 18th and 19th century lighting (headlined by the second half of the Meyer lighting collection), while the April 29 auction saw the sale of the Phillip Sullivan lantern collection. All three sales were successes, as Jeffrey S. Evans & Associates specializes in 18th-20th century glass and lighting, Southern decorative arts, Americana, art and antiques.

The May 19 sale—the annual early glass and lighting auction—was particularly special this year because it combined with the National American Glass Club’s 2012 seminar that Jeffrey S. Evans & Associates hosted in neighboring Harrisonburg. Historic and private collections tours, a day of lectures at the company gallery plus the auction kept attendees busy and enthralled all weekend.

“The seminar turnout was fantastic,” said Jeffrey S. Evans. “Members flew in from California, New England, Florida, Canada and England.” He added, “The auction performed as we expected. The market for bottles and flasks continues to be very hot, as is the demand for free-blown wares, especially when a strong attribution can be made. Also hot are open salts from the early pressed and lacy periods.”

Evans cautioned that other categories of glass collecting are “off probably by 50 percent from the prerecession market, which is pretty much in line with most other types of antiques today.” But he said it’s a situation that presents an opportune time to acquire quality 19th century glass at wholesale prices. “Collectors are beginning to recognize the great values out there. Now is a great time to buy.”

The April and May auctions were all absolute, meaning everything sold, regardless of price. The May 19 sale had 66 bidders in attendance, plus 223 people registered to bid online (through LiveAuctioneers.com). Internet activity accounted for 1,912 submitted bids. There were 1,696 total alternate bids (including phone, absentee and online left bids) and absentee bidders totaled 137 people. In all, the auction grossed right at $228,500.

Following are additional highlights from the May 19 auction. All prices quoted include a 15 percent buyer’s premium.

A medium sapphire blue one-pint scroll flask (GIX-18), with an ill-defined center star only, made by an unknown United States glasshouse circa 1840-1860, standing 7 inches tall, coasted to $4,888; and a colorless lead glass pressed Horn of Plenty rectangular undertray, one of only two known, made to accompany an extremely rare rectangular covered casket/dish and made circa 1845-1855, topped out at $3,738.

An extravagant, blue to colorless cut overlay chalice, a deep bowl cut with tiny stars and upright ferns, probably made in France by Saint-Louis or Baccarat, circa 1880-1900, 12 1/4 inches tall, 5 inches in diameter, topped out at $3,220; and an advertising ironstone covered dish, octagonal footed form, for Sweeny & Son in Wheeling, Va. (now West Virginia), circa mid-19th century, 7 inches tall, wowed the crowd for $3,105.

As stated, the star of the April 28 lighting auction was the second half of the Meyer collection. A large number of the lamps in the first Meyer auction were purchased by a new museum being formed in the western U.S., while most lamps in this auction were captured by private collectors throughout North America. The appeal of the collection was the complete nature of each lamp, including the period burner, chimney and shade.

“The Western museum found these features especially attractive, considering the difficulty of acquiring complete period setups in today’s market,” Evans observed. “The Meyers spent more than 30 years carefully assembling their collection, piece by piece, and their efforts were rewarded, both monetarily and in terms of historical significance. This was truly a museum-quality collection.”

About 76 people were bidding live, at the gallery, for the April 28 event, while 81 registered absentee and phone bidders submitted 812 bids. The 139 bidders who were approved to bid through LiveAuctioneers placed a total of 1,746 alternate bids. All 497 of the lots that came up for bid changed hands. There were zero passes. The auction grossed $162,455.

Following are highlights from the April 28 auction. All prices quoted include a 15 percent buyer’s premium.

A Blackberry stand lamp with brilliant teal green font and alabaster/clambroth Baroque base, made circa 1870, achieved $2,300; and a cut overlay star and quatrefoil stand lamp, with a white cut to starch blue pyriform font, earned $2,185.

A 19th century sheet iron Rumford type stand lamp having the original green paint with traces of yellow pinstriping, and with a square weighted base and hinged refill cap and sleeve for a detachable shade, climbed to $2,070; and an opaque pale green Coolidge Drape stand lamp with matching patterned chimney-shade, circa last quarter 19th century, garnered $1,955.

“We could not have had a more memorable way to end our lighting auction weekend on April 29 than with the Rushlight Club seminar and Sullivan lantern collection,” Evans said. “Phil Sullivan was a past president and active member of the club, and he and his wife, Carolyn, were friends with many of the club’s New England constituents. All who participated in the auction commented on the breadth and fine quality of the Sullivan collection. Bidding was spirited throughout the auction.”

Winning bidders included two U.S. museums, private collectors and dealers from across North America and around the world. “Our lighting cataloger, Barbara Morris, was thrilled to have the opportunity to handle such an important and specialized collection,” Evans said. “It offered her a crash course on the history of the lantern within the overall narrative of historic lighting.”

The April 29 auction actually comprised just half of Phil Sullivan’s 900-piece lantern collection. The second half will be sold by Jeffrey S. Evans & Associates on Friday, Oct. 19, at 1 p.m., in Mount Crawford. The final numbers for the April 29 auction were: 78 in-attendance bidders, 120 registered LiveAuctioneers.com bidders (placing 1,567 bids), 99 absentee and phone bidders (296 bids) and a final gross of $87,782.

Following are highlights from the April 29 auction. All prices quoted include a 15 percent buyer’s premium.

A pierced sheet iron “P.W.R.R.” whale oil lantern with traces of japanned decoration and a strap ring handle, having a fixed colorless globe and removable base with bayonet mechanism, circa mid-19th century, reached $1,380; and a C.T. Ham sheet iron and brass “New York Central” conductor’s railroad lantern with bail handle, vertical wire guards and removable base, late 19th century, made $1,150.

Jeffrey S. Evans & Associates’ next big auction will be held on Saturday, June 23. Offered will be hundreds of examples of Americana and Fine Antiques. A preview will be held June 20-22, from 10-6, with a free appraisal day on Wednesday, June 20, from 1-4 p.m. As with all Jeffrey S. Evans auctions, it will be held in the spacious Mount Crawford gallery at 2177 Green Valley Lane.

Jeffrey S. Evans & Associates is always accepting quality consignments. To consign an item, an estate or collection, call 540-434-3939 or e-mail them at info@jeffreysevans.com. For more information on the company, and its schedule of upcoming auction events and seminars, log on to www.jeffreysevans.com. 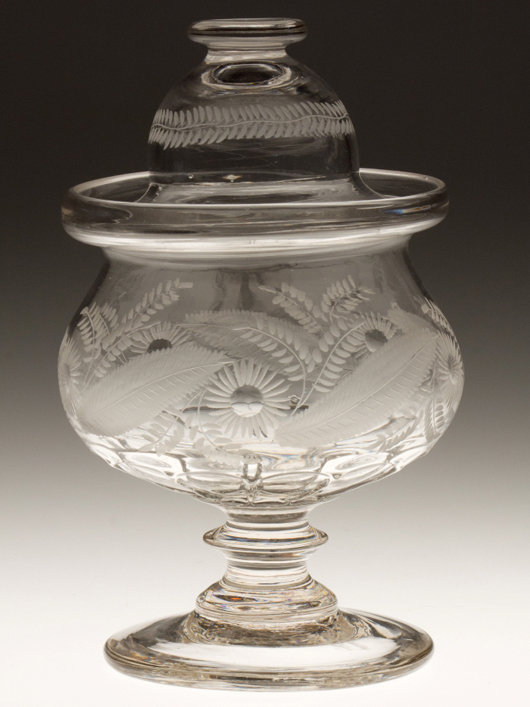 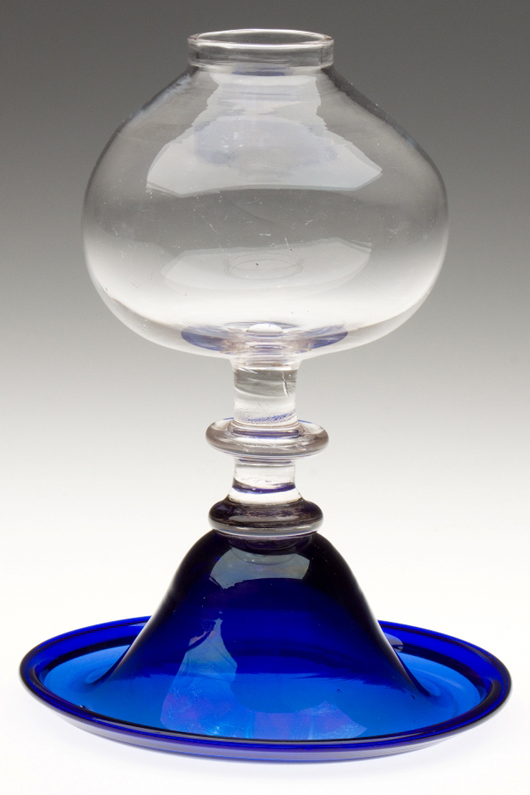 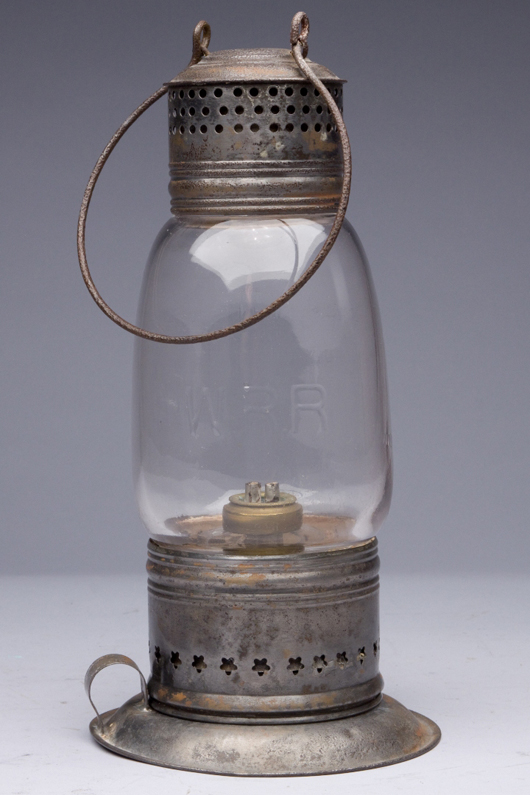 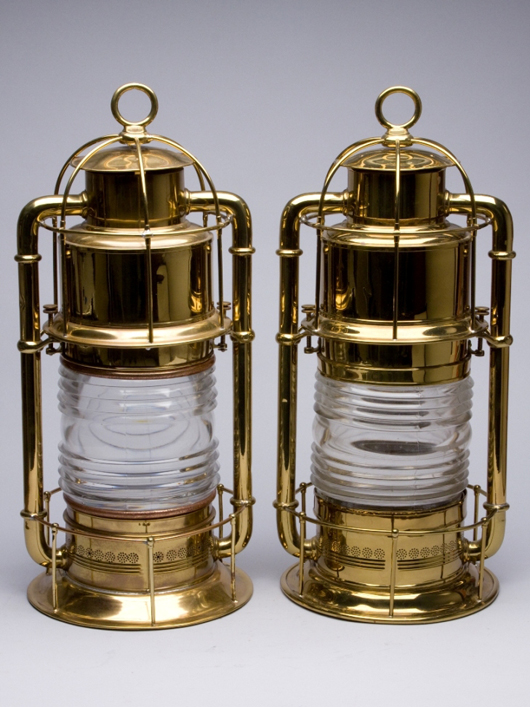 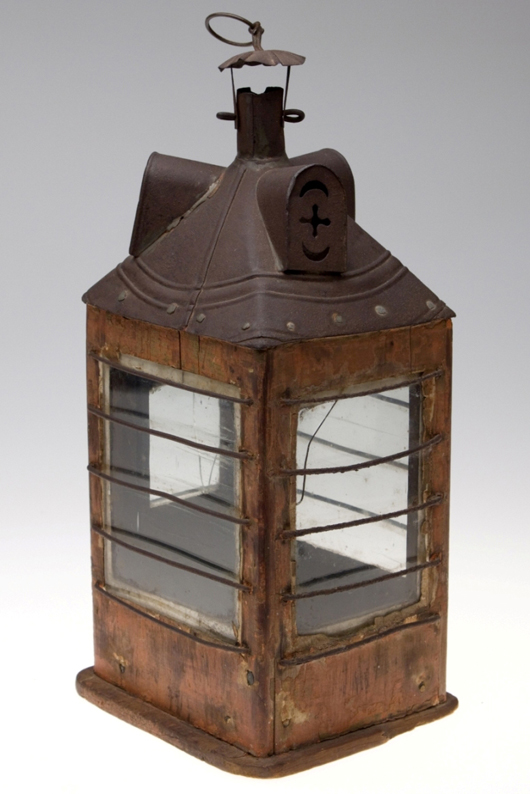