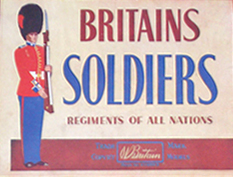 PITTSBURGH – Bidders called up the heavy artillery during Old Toy Soldier Auctions’ May 16 absentee and Internet auction, spending a total of $169,900 and claiming 99.9 percent of the lots offered. All prices quoted include an 18 percent buyer’s premium.

“Like a lot of auction houses, we were nervous in the current economic climate, but I thought the result was terrific,” said OTSA’s owner, Ray Haradin. “There were 677 lots, and I had expected it to gross $150,000 on the high end. It went almost $20,000 higher.”

Haradin attributed the auction’s success to the ongoing demand in the marketplace for toy soldiers and figures made by Britains. “They have the biggest collector base and still carry the day,” Haradin said.
Another factor that contributed significantly to the auction’s success was Internet participation. “We had 122 absentee bidders, an additional 15 bidders on the phones, and another 84 online through LiveAuctioneers,” Haradin said. “One thing we noticed was that the quality of Internet bidders has gone up. Back when our sales ran through eBay Live, we would have more people registering to bid, but we’d only sell 20 percent online. LiveAuctioneers no longer partners with eBay, so the number of bidders is not as high, but we’re selling 30 percent online. The ones who register all seem to bid.”

As anticipated, the top seller was the cover lot, a prized 25-piece Britains Bahamas Police Band with drum major, bandmaster, drummers, horn and woodwind players. The rare first-version set was probably issued for only one year, 1959, and achieved its high estimate at $6,490.

Another rare boxed set with a Caribbean flavor, Britains’ #103 Bahamas Policemen standing at attention, was created as a companion set to the Police Band. It sailed past its $1,200-$1,500 estimate to sell via LiveAuctioneers for $2,178.

Britains’ #48 Egyptian Camel Corps set with native soldiers on camel mounts enjoyed a long production run, 1919 to 1941. An early example of the set, in excellent condition with figures still tied into their proper positions within the original black-labeled box, closed above estimate at $826.

Earning five times its high estimate at $2,242, a Britains #1617 set known as “Types of the Territorial Army” proved especially appealing to bidders. Haradin said it’s a favorite because the figures are in 1937 Coronation attire. “This set could be put together with Britains’ Queens Procession and make a large and very attractive display.”

Made by the German manufacturer Heyde, a #259 British Army Pontoon Building Section in its original wood box contained pontoon boats, sections of tin “grass” for the riversides, bridge sections and supports, plus 19 British engineers in khaki uniforms. The set was estimated at $600-$700 but soared to $1,652.

Yet another pre-World War II military set that surpassed expectations was Britains #140 United States Infantry in a “Soldiers of the World” box Estimated at $400-$500, it marched off to a new owner for $1,298.

Haradin said that among “civilian” figures, those with a sporting theme are the most highly sought after. A circa-1930 Johillco set consisting of a greyhound race starter with six greyhounds in various-colored racing jackets had been estimated at $250-$280. Two phone bidders competed aggressively for the 7-piece set; one of them prevailed at $1,888.

Britains’ Circus Display Set # 1539 was produced from 1948 through 1961. Comprised of 23 pieces plus two stands, the boxed set was purchased through LiveAuctioneers for $1,452.

A 1933-1935 Britains Huntsman in red jacket and top hat, riding a cantering horse, also exceeded its high estimate several times over, selling for $472.

Haradin said it is heartening to see the number of new collectors coming into the toy soldier and figure hobby, and said much of it is due to the crossover factor. “The collectors fall into several groups – military buffs, the war gamers who like to re-enact history, model figure makers who make and paint figures, and people who might have a small collection behind their desk at the office. It’s a global hobby, and there’s a lot of overlap.”

Old Toy Soldier Auctions will hold its next sale – featuring the collections of Vincent C. Banker, the late James “Doc” Wengert, and various other properties – on Nov. 21, 2009. Live online bidding will be provided by LiveAuctioneers.com. For additional information, call Ray Haradin at 800-349-8009 or 412-343-8733, or e-mail otsauctionsusa@yahoo.com. Visit OTSA online at www.oldtoysoldierauctions.com.

View the catalog for OTSA’s May 16 sale online at this link through LiveAuctioneers.com.

Johillco’s rare and colorful 1930s racing greyhounds set with six lithe dogs and a race-starter bolted to $1,888 against a high estimate of $280. 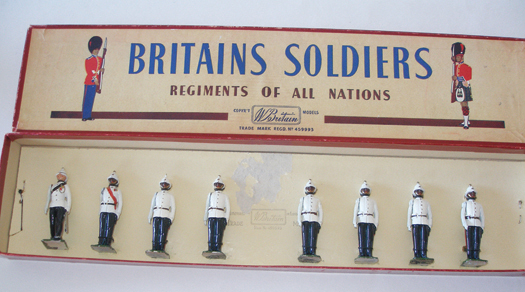 A companion set to the Bahamas Police Band, Britains’ Bahamas Police set features eight figures including a sergeant and other officer. Made in 1959 for export only, it sold to a LiveAuctioneers bidder for $2,178. 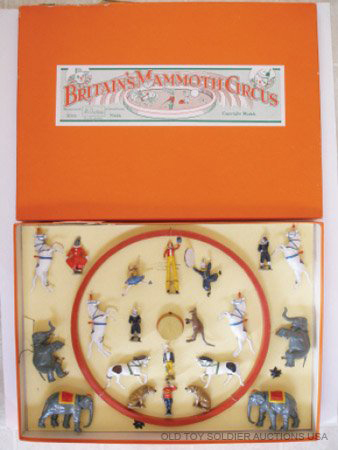 Britains’ Circus Display Set # 1539 was produced from 1948 through 1961. Comprised of 23 pieces plus two stands, the boxed set was purchased through LiveAuctioneers for $1,452. 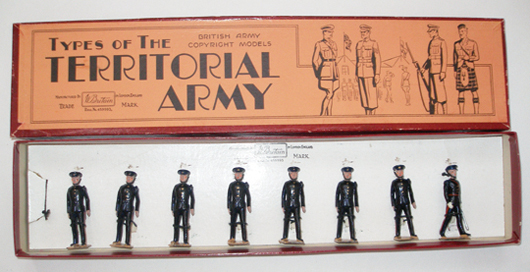 Attired in Coronation dress, Britains’ "Territorials" can be displayed correctly with the company’s Queen’s Procession set. Estimated at $450 on the high end, the set made $2,242.

An elegant swan and her cygnets sail across a pond in this early 1930s Britains production that sold for $531 against a high estimate of $130. 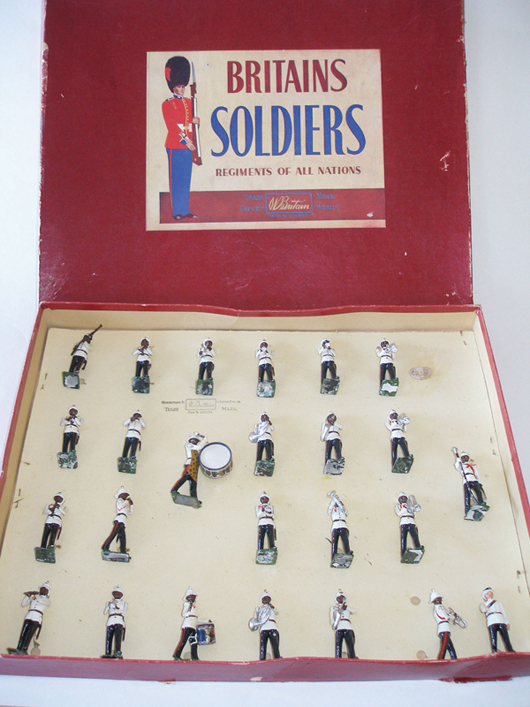 Britains’ 25-piece Bahamas Police Band made its high estimate with a winning bid of $6,490 and finished as top lot of the sale. 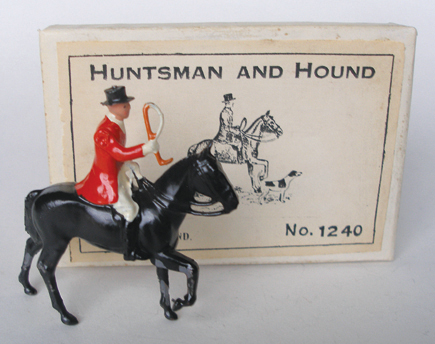 In his top hat and "pinks," but lacking a hound, Britains’ 1933-1935 Huntsman with reproduction box achieved $472 – more than five times its high estimate. 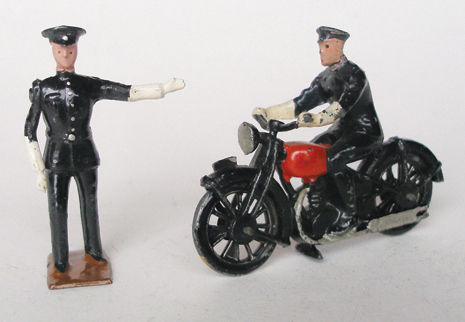 A Britains policeman on motorcycle cruised to $590, more than double its high estimate. 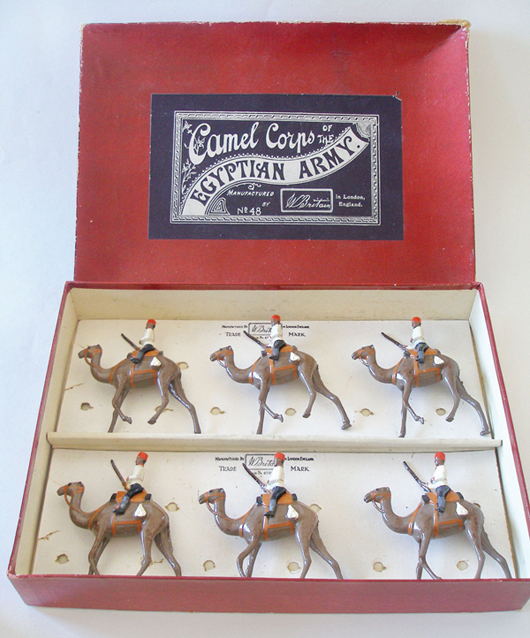 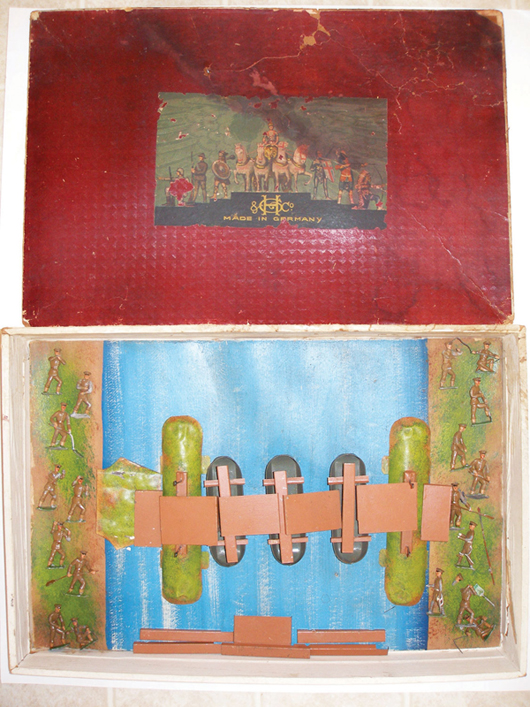 Made in Germany by Heyde, the British Army Pontoon Building section with three tinplate pontoon boats, tin "grass" and paper river also includes 19 British engineers in khaki apparel.With a high estimate of $700, it sailed to $1,652.