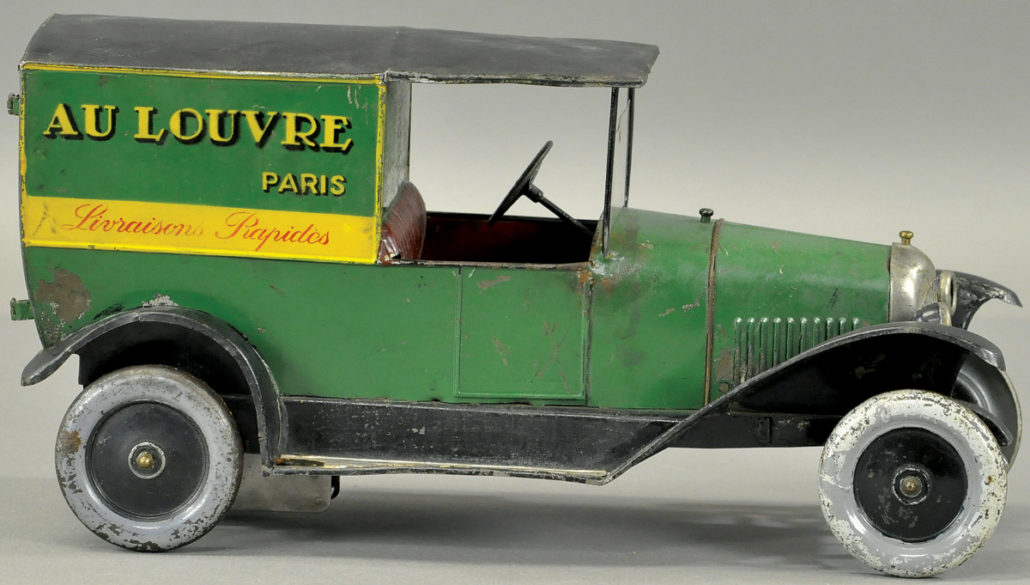 VINELAND, N.J. – Family-owned Bertoia Auctions produced another big winner on April 27-28 as their 2018 Spring Signature Sale rang the register at $1.9 million. More than 1,000 lots of high-quality toys, banks, trains and Christmas antiques with prestigious provenance attracted an energetic crowd to Bertoia’s gallery. Hundreds of other bidders battled for favorites over the phone and via the Internet.

Bidders wasted no time reaching for the top shelf, so to speak. Lot 5 (shown at top), a very rare Citroen delivery van emblazoned “Au Louvre,” suggesting it was a depiction of a Louvre Museum vehicle, came to the auction block with a $2,000-$3,000 estimate. It was off to the races from the very beginning and didn’t apply the brakes till it had reached an astonishing $48,000. Chatter during the preview suggested it was likely a prototype.

“There was so much enthusiasm going into the sale with all the different categories we were offering,” said Bertoia Auctions’ owner, Jeanne Bertoia. “In particular, there was a lot of buzz about the European toys, especially the French Martin toys. There were times when seven or eight phone lines were in use, and on some pieces there were six to eight absentee bids in place before the bidding even opened.”

The 55-lot array of clockwork characters by Fernand Martin was selectively acquired over a 60-year period by a New York collector. It comprised the second half of a collection Jeanne described as “one of the best Martin collections we’ve ever seen.” Its prized contents included a Diablo, Washerwoman, Barber, Drunkard, and Man with Barrels, to name but a few classic productions. An English “bobby” made $9,000, while a Cakewalk sold for $9,600. A possible one-of-a-kind piece was the circa-1892 Le Cherif depicting an Arab rider on a camel. Bertoia’s had never seen another example, and collectors, who obviously recognized it rarity, pushed it to a winning bid of $9,600. Even smaller Martins were in demand. A diminutive goose ended its run at $3,300. 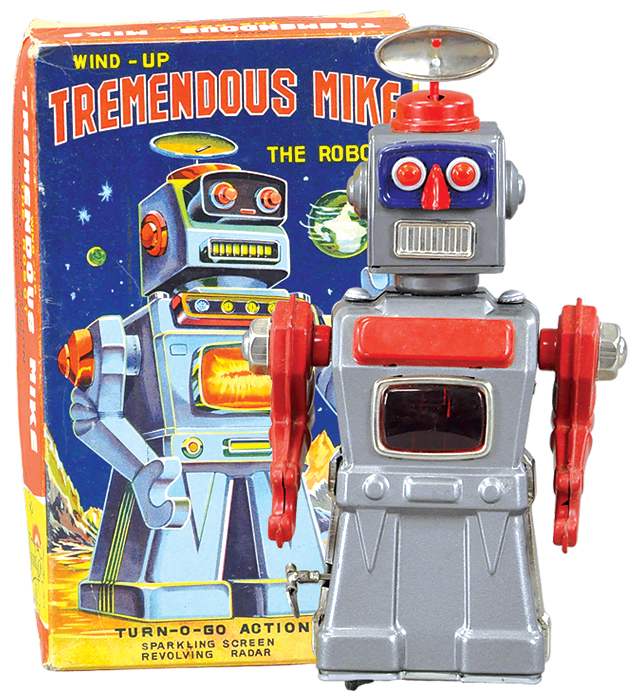 Robot collectors were holding their cards close to their vests over one particular lot: a Tremendous Mike clockwork robot made by Aoshin Shoten, Japan. In pristine condition, it also retained its very rare original box. Against an estimate of $6,000-$9,000, it commanded $13,200.

A Connecticut collector’s extensive assortment of Popeye toys transported collectors across a panoramic timeline of the cartoon sailor’s adventures. A Linemar Popeye Pilot Air-O-Plane, one of the rarest of all 1950s Japanese Popeye toys, landed at $5,700; while an example of Popeye Funny Firefighters blazed to $2,280. 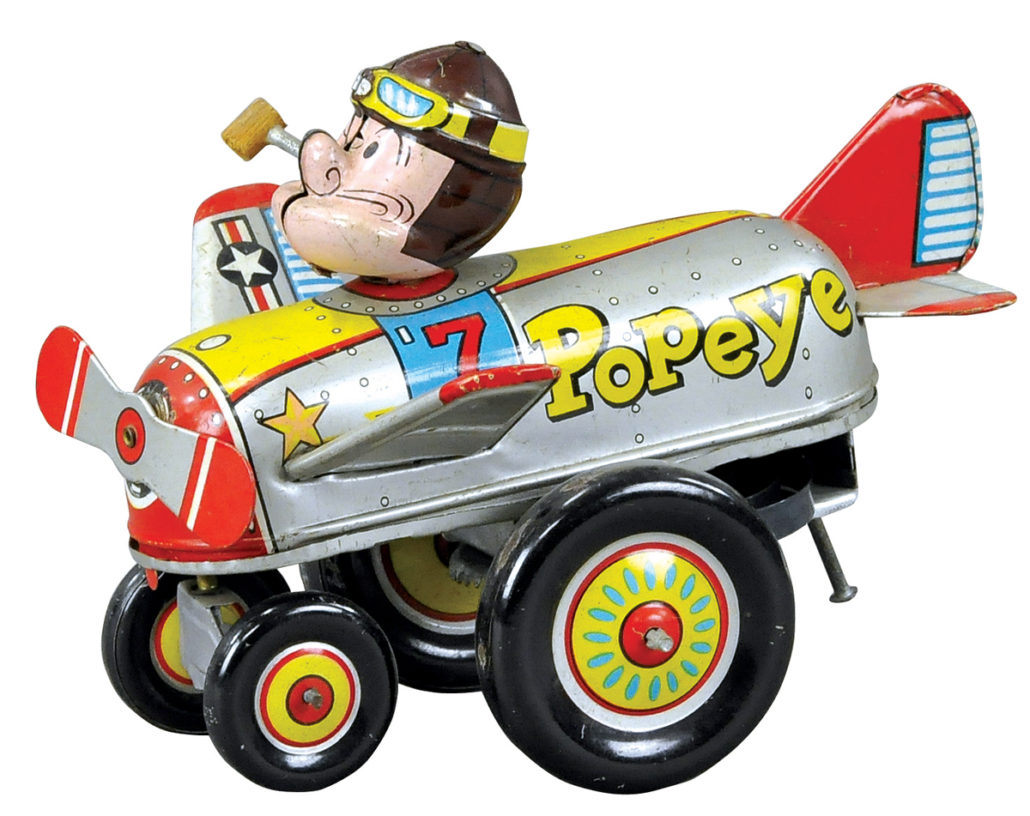 “It was amazing how many absentee bids there were on the Popeye lots, not to mention the phone and Internet bids. The owner of the collection was not a high-profile person in the hobby, but he has always bought great things. Collectors definitely took notice,” Jeanne said.

In other tin toys, a fleet of fine boats all sold within estimate, including a Marklin Battleship Baltimore and Bing Furst Bismarck. A highly desirable tin vessel of smaller scale, a 19-inch Gunthermann eight-man racing scull, was chased to $14,400. 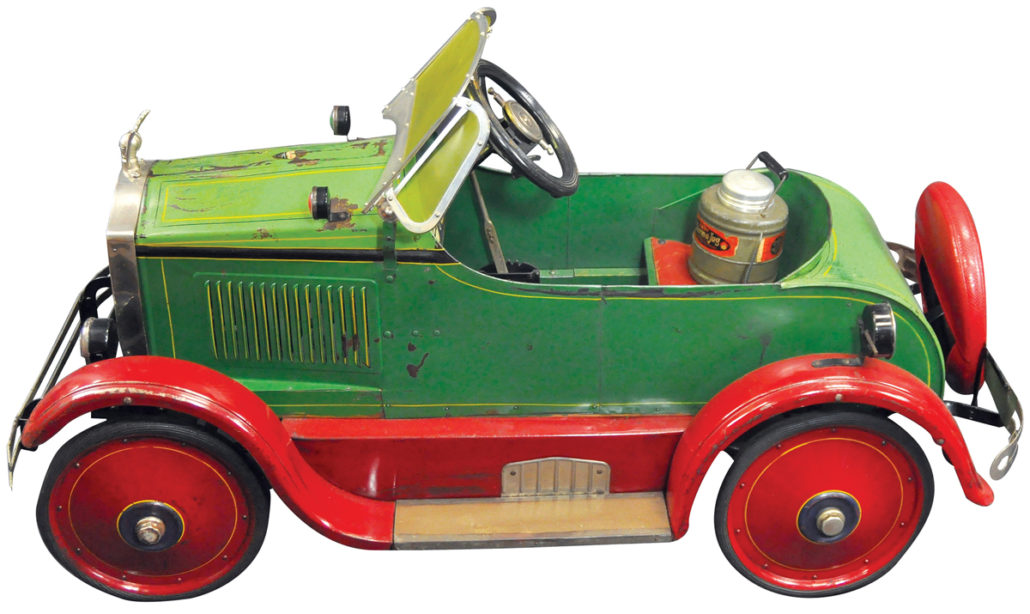 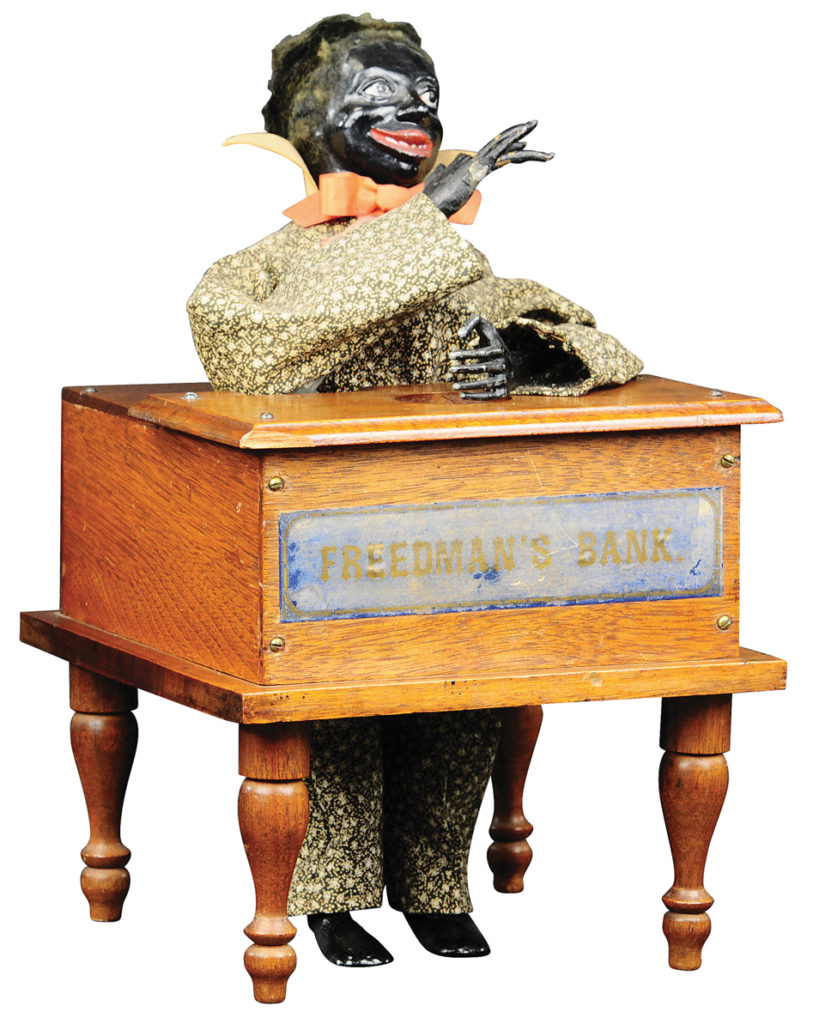 A grouping of early American clockwork and tin toys and banks was very well received. An Althof Bergmann horse-drawn fire pumper (below) was snapped up for $7,200, but the star of the show was a historically important Jerome B. Secor Freedman’s Bank (above). Its illustrious lineage included ownership by such legendary collectors as Ed Mosler, Stan Sax, Andrew Emerine, and Max Berry. Of obvious museum quality, it was expected to finish in the six-figure range, and did not disappoint in reaching $132,000. A pristine Darktown Battery mechanical bank nearly doubled high estimate in achieving $11,400; while an Acrobat sold above high estimate for $12,000, as did a Perfection Registering bank, which reached $10,200. 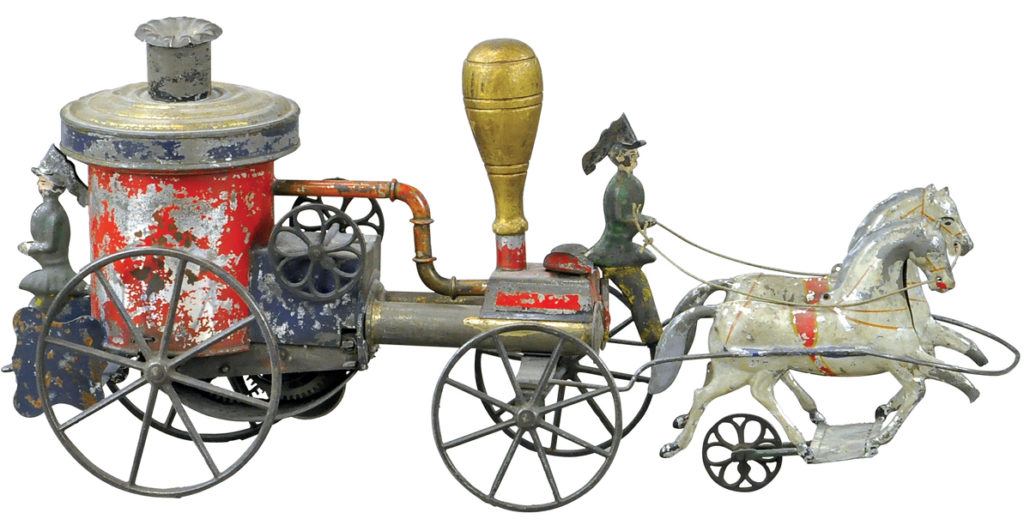 Cast-iron automotive toys have become a staple at Bertoia’s, and this sale had its share of desirable, high-quality pieces. A boxed, mint-condition Hubley 12-cylinder race car breezed past its high estimate to make $7,200. Both sizes of the scarce Vindex steam shovel were sold, with the larger of the two realizing $6,600; and the smaller, $5,700. A Kilgore roadster more than doubled expectations at $6,600.

Approximately 120 lots of European and American trains rolled across the auction block. Most settled within estimate, with the most active bidding on Lionel productions. Prices realized included a boxed 9U Kit, $6,000; Red Top Flying Yankee, $4,500; a 700E model, $4,200. A boxed Bing New York Central chugged to $5,100 and a Marklin Adler passenger set followed closely behind at $4,800. An American-made Boucher freight set concluded its run at $3,300.

The Saturday session welcomed representations of every major holiday, starting with Christmas. The gallery’s gleaming showcases reflected the Christmas spirit bountifully with its many Santa figures, Santas in reindeer-drawn sleighs, and large clockwork nodding Santas. A seldom-seen German candy container depicting a fur-bearded Santa (above) in a light blue fur robe, grasping a candleholder feather tree, sold for an above-estimate $4,800. Another estimate-defying candy container was the red-robed Father Christmas holding a feather-tree sprig, which doubled its high estimate at $2,280.

At every Bertoia’s holiday session there are turkey lovers. Of the selection offered on April 28th, the top seller was a large German turkey-form candy container that sold for $2,700 against an estimate of $400-$600. Rare Halloween items included a Halloween lantern candy container, $2,700 against a $500-$700 estimate; and a metal parade torch lantern that lit up at $1,920.

Part I of the Palmer Cox Brownies grouping from long-time collectors Ed and Nan Wagoner featured two Brownie Egg figures that tripled estimate at $2,200; and a Keystone Cop lantern, which made an above-estimate $2,040. The second half of the Wagoners’ whimsical collection will be sold in Bertoia’s November sale.

A small grouping of teddy bears and dolls included several choice lots, such as a 20-inch Steiff rod bear in the rare apricot color, which finished at $10,800; and a 6-inch Bru Bebe (above) that was purchased for $19,200 – nearly twice its high estimate. The beautiful lineup of figural cast-iron doorstops was led by a very rare Hubley 13-inch Giraffe (below). Entered with a $3,000-$4,000 estimate, it realized $14,400. Jeanne Bertoia, an internationally recognized expert on doorstops, explained the outstanding price with the succinct comment, “Quality sells.” 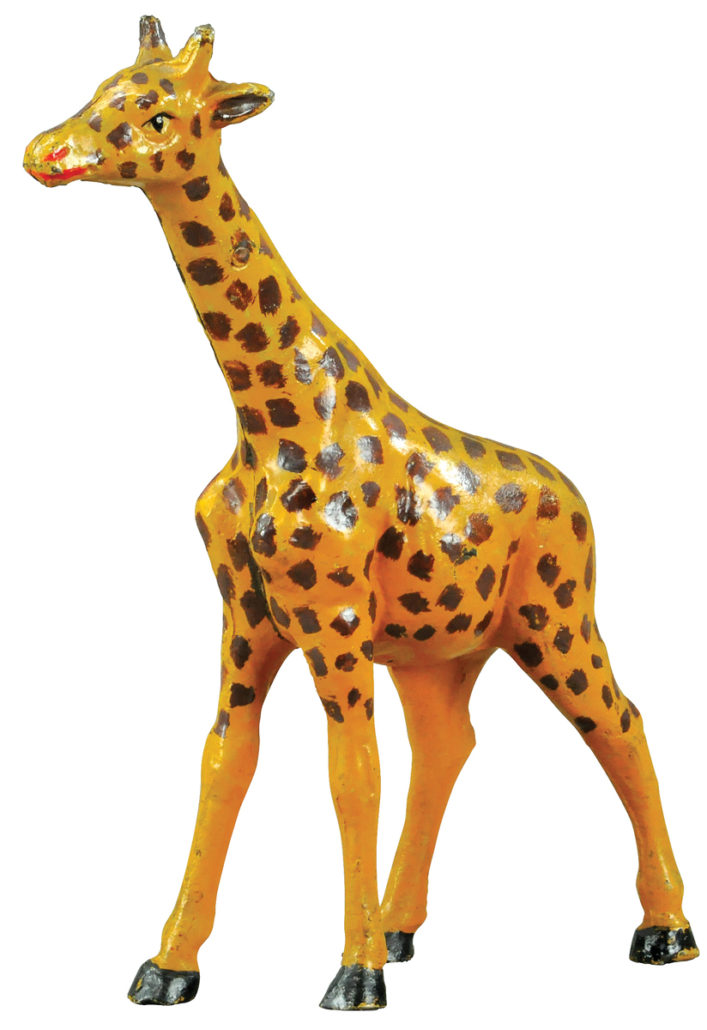 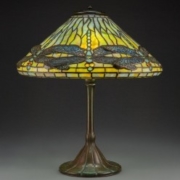 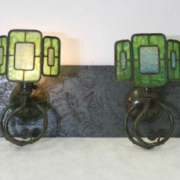 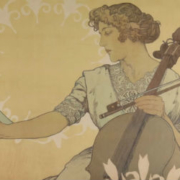 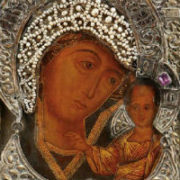 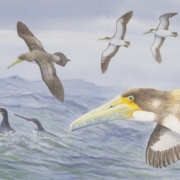 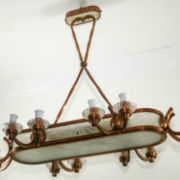