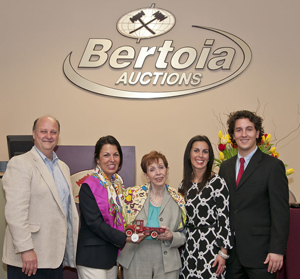 VINELAND, N.J. – It’s doubtful that even a crystal ball could have been more accurate than Bertoia Auctions’ experts who predicted the Donald Kaufman auction series would finish at around $12 million. As the record now shows, with the hammering of the last lot in the fifth and final auction to disperse the fabled collection, held on April 15-16, the grand total came in at $12.1 million (inclusive of 15 percent buyer’s premium). This total represents the highest amount ever achieved by a single-owner antique toy collection at public auction.

As was the case with the four previous auction sessions devoted to Kaufman toys, a strong and supportive group turned out for the two-day event nicknamed “the final lap” to bid, buy and enjoy the Bertoia family’s hospitality. Over the weekend, attendees were treated to a wine and cheese preview and buffet-style luncheon, not to mention a champagne toast to the late Donald Kaufman as the auction neared its end.

“There were many who attended all five of the Kaufman auctions, but we believe collectors made an extra effort to attend the fifth sale even if they had missed some of the other sales. It was the final farewell to the collection,” said Bertoia Auctions’ owner, Jeanne Bertoia. Many of those who could not attend opted to bid absentee or live via the Internet through LiveAuctioneers.com.

The April sessions achieved $873,000 against an overall high estimate of $505,000. “The toys in the April sale didn’t have the dollar value of the other auctions, but we had planned it so there would be a little bit of everything – a ‘something for everyone’ sale,” said Bertoia.

Sure enough, the weekend’s top lots ended up being a nicely mixed assortment of cast iron, tin and pressed steel. Leading the lineup was an Arcade cast-iron “White” moving van marked “Lammerts Furniture – Rugs – Draperies” on each side panel. Considered the finest known example of its type, the 13-inch Art Deco-style van with silver-trimmed grille applied its brakes at $29,900 against an estimate of $8,000-$10,000.

Made by Lionel and accompanied by its original paper-labeled box, a No. 84 set of two 8-inch electric-powered racers with composition drivers was accurately described as being in “pristine” condition. Complete with metal track, the rare set estimated at $1,200-$1,500 whisked off to a $12,650 finish.

An American National fire pumper pedal car, in all-original condition with upright boiler, wooden side ladders, platform railing and a bell on its hood, measured 60 inches in length. It blazed past its $5,000-$7,500 estimate to settle at $10,350.

Another pressed-steel favorite was the Buddy ‘L’ pile driver on treads. Measuring 18 inches by 24 inches, the rare example of kid-size heavy machinery was bid to $8,625.

A welcome surprise at the start of the Saturday session was Michael Bertoia’s appearance at the podium as guest auctioneer. The 26-year-old son of Bertoia Auctions’ founders, Jeanne and the late Bill Bertoia, Michael joined the family business in January 2008. He had been quietly apprenticing under the stewardship of Bertoia’s long-time auctioneer Tim Luke and had tested his skills with an uncataloged selection of box lots following Bertoia’s November holiday session. Now ready for the challenge of multiple forms of bidding, Michael stepped up to call the first 100 lots of the day.

“He did an amazing job,” said Jeanne. “There were many telephone, absentee and Internet bidders, as well as book bids to manage. He didn’t miss a single bid and was very well received by the crowd. I don’t know who was smiling bigger, me or Sally Kaufman. I had asked Sally prior to the sale if she would be comfortable with Michael calling the first 100 lots. Not only did she approve, she also made sure she was there before the sale began. She said she didn’t want to be late to watch him.”

When the auction reached its last 100 lots, Bertoia’s broke out the champagne and invited everyone to take part in a toast to Donald Kaufman (1930-2009), who had lived long enough to attend the first two auction sessions and witness the happiness his toys brought to their new owners.

The last two lots of the sale held special significance, and the crowd recognized them as such. The penultimate item, a Hans Eberl tinplate clockwork delivery van, German-made and dating to the 1920s, advertised “Kaufmann’s – The Big Store – Everything Under The Sun.” Coincidentally, Don Kaufman’s father and uncle were retail merchants who traded as Kaufman Brothers – later shortened to K-B, as in K-B Toys, the family firm Don Kaufman subsequently co-founded. Although the toy delivery van advertising “Kaufmann’s” was from a Pittsburgh store with no connection whatsoever to Don Kaufman’s family, it nonetheless embodied Don’s own family history perfectly. It was a natural choice for the auction series’ signature piece and appeared on the cover of each of the five auction catalogs. Estimated at $4,000-$5,000, it delivered the goods at $11,500.

The closing lot, an Arcade cast-iron International Harvester Red Baby truck, was the first toy Don Kaufman had ever bought – for $4 back in 1954. Thanks to a number of generous collectors in the audience, the truck ended up staying in the Kaufman family. Earlier in the day, a family group consisting of a grandfather, father and son had proposed the idea to their fellow collectors that the toy should be purchased as a gift for Sally Kaufman. It was well known that Don had not held back any toys when the auction goods were picked up, so there weren’t any legacies to pass down to future generations of the family. The hat was passed, figuratively speaking, and a sizable sum was collected from those who chose to participate. When Jeanne Bertoia found out about the plan, she clinched the deal by issuing a guarantee that Bertoia’s would cover any shortfall between the collected monies and the amount needed to win the truck at auction.

Michael Bertoia stepped up to the podium, called the symbolic last lot, and sold it for $2,588 to the paddle raised by the trio of family members. The toy was then presented to Sally – who had no idea it was going to happen – together with a card signed by all those who had chipped in for the gift.

“I never saw so many teary-eyed men in my life,” Jeanne said, recalling the moment of the toy’s presentation. “It was an emotional but happy point at which to conclude the auction series.”

Jeanne summarized the series by describing it as “a window on relationships among collectors. At every sale we had crowds. People would tell us it brought back the old days of big toy auctions and how much they had missed them. I’m a collector, as well, and I have a stake in the future of collecting. I have confidence that the market is strong and that it will remain consistently so.”

To contact Bertoia Auctions or to order any of the five catalogs from the Donald Kaufman auction series, including the fifth catalog that contains the index for the entire catalog set, call 856-692-1881 or e-mail Toys@BertoiaAuctions.com. 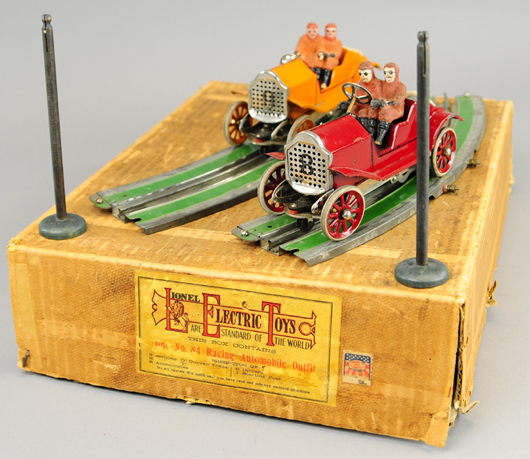 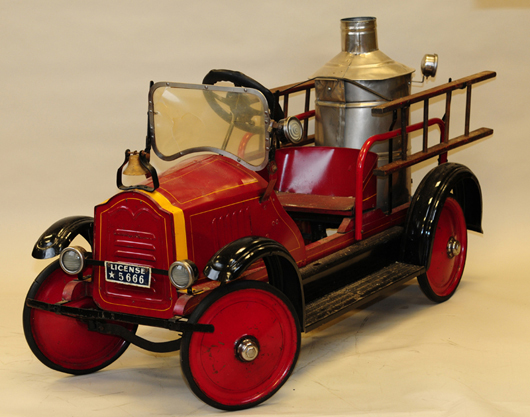 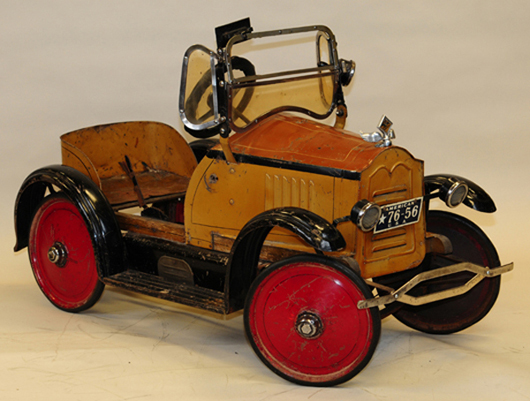 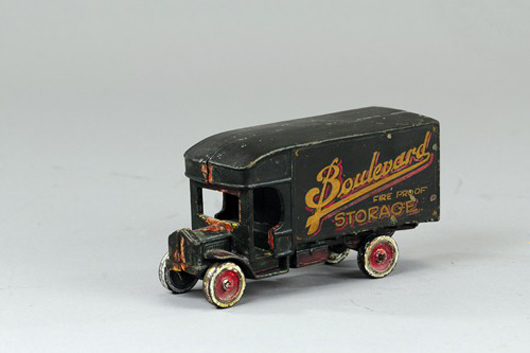 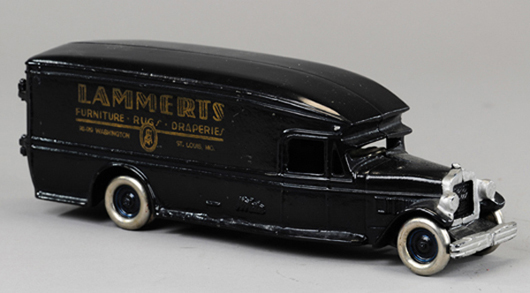 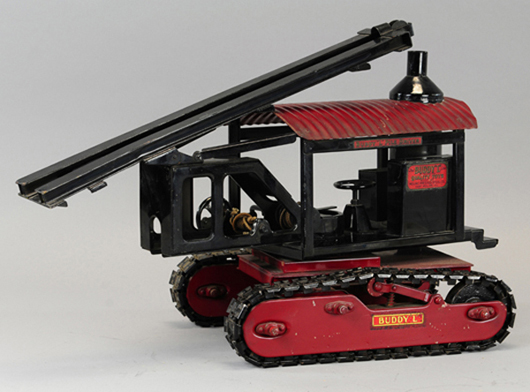 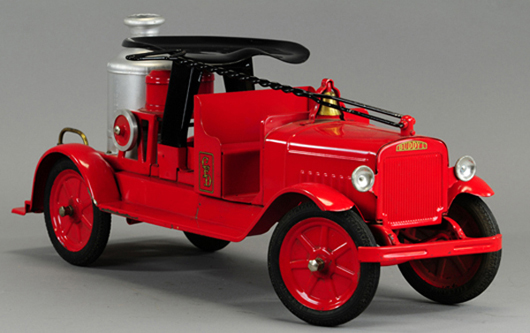 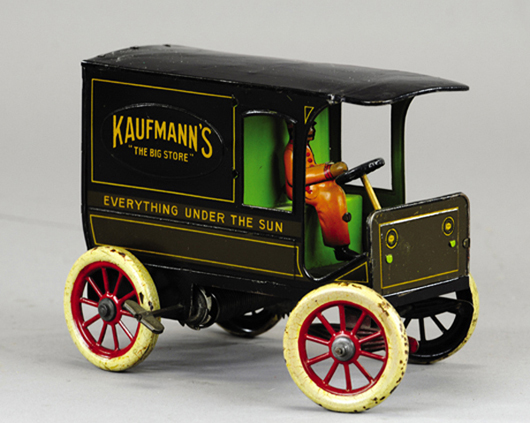