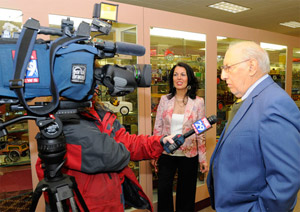 VINELAND, N.J. (ACNI) – Long lamented as a bygone era, the days of toy collector kinship were revived with an electrifying spark as a global contingent of buyers convened at Bertoia Auctions on March 19-21 for the debut of the Donald Kaufman auction series.

Built over a period of nearly 59 years, the internationally renowned Kaufman collection’s initial outing rang the register at $4.2 million, setting a house record for Bertoia’s and sending a message of confidence about the toy-collecting hobby that was obvious to all in attendance. Real-time Internet bidding through LiveAuctioneers.com added $341,858.81 to the three-day gross.

“The return of the toy camaraderie we remembered so fondly from 15 or 20 years ago was an inspiring thing to see,” said Bertoia Auctions’ owner, Jeanne Bertoia. “What I heard from all the old-timers was, ‘It’s back.'”

The gallery’s stylishly modern décor, enhanced by vases of fresh orchids, lent a new sense of chic to the auction preview process. Thursday evening previewers sipped wine and noshed on gourmet hors d’oeuvres as they inspected the deluxe toys through floor-length wall-to-wall glass showcases and chatted animatedly in German, French or English with their soon-to-be auction competitors.

In a specially designed lounge and auction-catalog-signing area, Don and Sally Kaufman – flanked by members of their immediate family and attentive Bertoia staff – greeted a steady flow of well-wishers and posed for countless photographs.

The scene at the preview might easily have been described as a United Nations of toy buyers. Jean Paul Brault had come from Paris specifically to buy toy racers. Also from Paris, Eric Gutsmuth, a collector for the past 30 years, was eyeing the European automotive toys.

Claude Hoffman of Stuttgart, Germany was there, hopeful of purchasing some of the rare Lehmann wind-ups in the collection. John and Adrianne Haley, of Yorkshire, England, were in attendance, as was their fellow Brit, the noted toy authority and author of several classic toy-related books, David Pressland, who had flown in from his holiday home in Tortola, British Virgin Islands.

Another Caribbean visitor was Danish-born Nic Moller, who had traveled from Curaçao. Moller was a welcome newcomer to the American toy crowd that had gathered. “I came because of the reputation of the collection,” he said. “Everyone here will see what an incredibly eclectic collection it is. That one person could do this is amazing.”

American bidders turned out in force from dozens of states and included a VIP list of toy hobby veterans. Bill “Speedy” Smith, owner of the Smith Collection Museum of American Speed in Lincoln, Neb., wore his trademark black hat to the preview. Recipient of many prestigious racing honors and awards, Smith also collects automotive toys in a major way and was ready to do some serious buying. “I’ve been bidding a lot against Donald over the last 25 years,” he said with a broad smile, “and if there’s one thing I’ve learned from that, it’s that you don’t bring a BB gun to a cannon fight.”

Additionally, fine art and antiques dealers could be spotted in the crowd, including Peter Tillou, a dealer of Old Masters and Americana who exhibits at the New York Winter Antiques Show. Peter had not previously been a buyer of toys, but his discerning eye for art zeroed in on a bright red Alfa-Romeo racecar, one of many treasures he took home. “It was, without question, the best-run auction I’ve ever attended,” Tillou remarked. “Every automotive toy displayed was a piece of art.”

Before the first lot was introduced, Don Kaufman stepped up to the podium to deliver a short, well-received message that he would repeat at the opening of the Friday and Saturday sessions. He told his fellow collectors that his collection was being sold in its entirety, that no toy had been held back, and that, without exception, all toys would be offered without reserve. “I hope everyone leaves with the toy they wanted,” he said. And many did.

The opening lineup of Hubley cast-iron circus toys struck early paydirt. Lot 9, a factory showroom example of a revolving Hubley Royal Circus Monkey Cage wagon, flew past its $30,000-$40,000 estimate to settle at $97,750. The buyer was Pittsburgh dealer Ray Haradin, who will add it to his business inventory.

The sale’s overall top seller was purchased in the second hour: lot 114, a rare circa-1909 Marklin Fidelitas clown caravan measuring 37½ inches long. A stunning hand-painted toy made by prewar Germany’s premier toy manufacturer, it had been estimated at $30,000-$40,000. With no encouragement required from the podium, it handily exceeded expectations to close at $103,500. The buyer was a private collector from Europe.

Other high-end lots included many European tinplate examples: a circa 1906-1909 Marklin two-seat open roadster, $57,500; a circa-1914 Marklin roadster with spare tire on toolbox trunk, $57,500; a circa-1912 Bing luxury taxi, $46,000; and a Fischer Father Christmas car, $39,100. The highest-priced child-size car was a circa-1930s electric-powered Baby Bugatti previously owned by William F. Harrah, founder of the Harrah’s casino and hotel chain. One of only 90 made and reportedly purchased for the Harrah children, it rolled across the finish line at $36,800.

Bertoia Auctions will continue its auction series exclusively featuring the Donald Kaufman Antique Toy Collection on Sept. 25 and 26, 2009. Complete details will be available to view soon at www.bertoiaauctions.com. Tel. 856-692-1881.

The sale’s top lot was a circa-1909 Marklin Fidelitas clown car caravan. The German hand-painted tinplate toy measures 37 ½ inches in length and is rarely seen other than in reference books. This example went to a European buyer for $103,500 against an estimate of $30,000-$40,000. Image courtesy Bertoia Auctions. 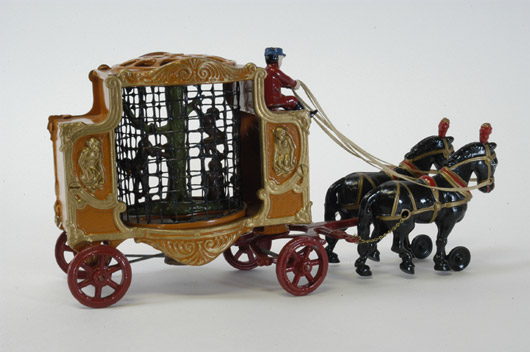 Considered the most elusive piece within Hubley’s famed Royal Circus cast-iron menagerie on wheels, the circa-1920s Monkey Wagon cage includes a mesh wire cage that actually revolves as the toy is pulled along. This 16-inch-long factory showroom sample was formerly part of the Perelman Museum Collection. It sold at Bertoia’s for $97,750, more than twice the high estimate. Image courtesy Bertoia Auctions. 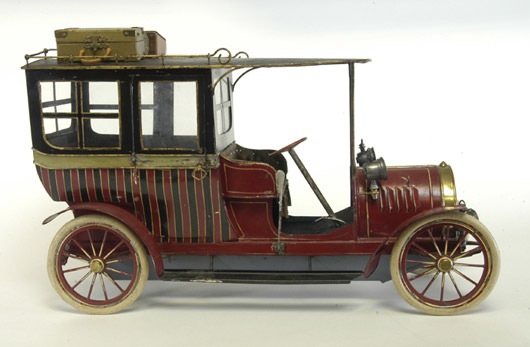 Believed to be the largest manufactured tin toy limousine ever made, this circa-1907 was long thought to be a French production, but subsequent research by David Pressland, author of The Great Book of Tin Toys, revealed it was made by Hispania of Barcelona, Spain. Exquisite artistry and craftsmanship are obvious throughout the 22½-inch-long toy, which sold at Bertoia’s for $80,500. Image courtesy Bertoia Auctions. 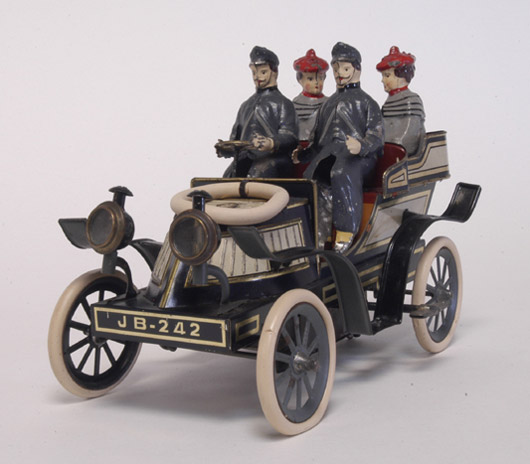 An extremely rare German production by Gunthermann, this clockwork open phaeton with four hand-painted passenger figures features glass-fronted headlamps and a white rubber spare wheel on a curved bonnet. It sold to a phone bidder for $62,100 against an estimate of $20,000-$25,000. Image courtesy Bertoia Auctions. 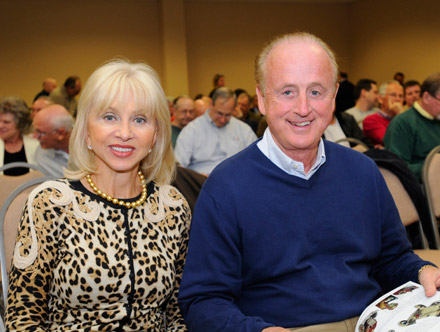 Among those who had traveled long distances to attend the debut auction in the Kaufman series were Diane and Jim Cook of Minneapolis. Photo by Phil Dutton, courtesy Bertoia Auctions. 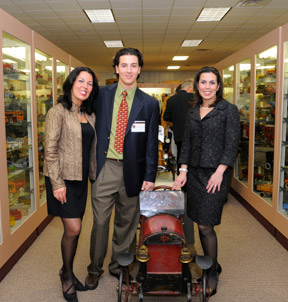 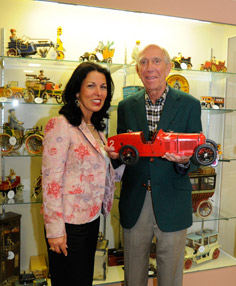 ‘I was very pleased that our campaign to reach the fine art community attracted the interest of many in the trade who do not ordinarily buy toys but who now have an interest,’ said Jeanne Bertoia, shown here with dealer Peter Tillou of Litchfield, Conn., with a handsome Alfa-Romeo racer he purchased at the sale. Photo by Phil Dutton, courtesy Bertoia Auctions. 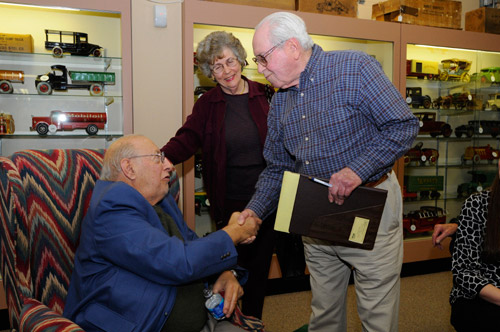 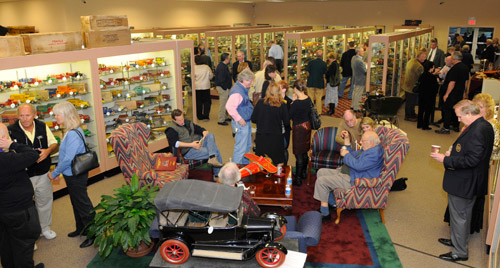 Bidding hopefuls nibbled on hors d’oeuvres and sipped wine or other beverages of choice at a busy red-carpet preview. Photo by Phil Dutton, courtesy Bertoia Auctions. 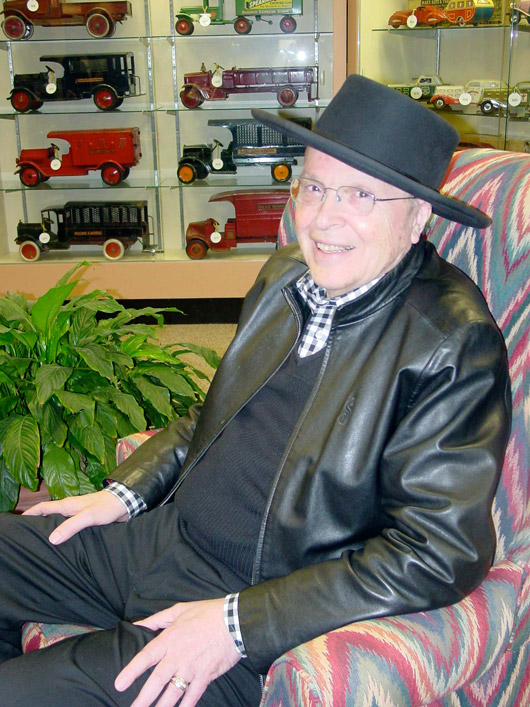 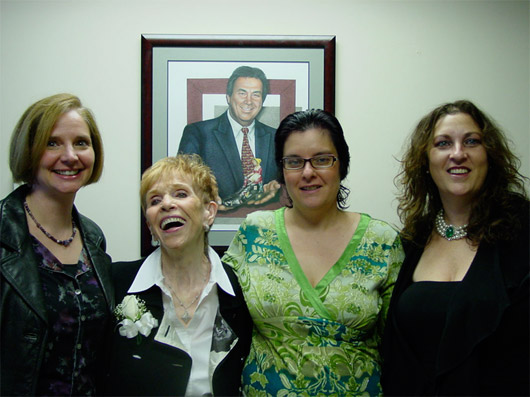 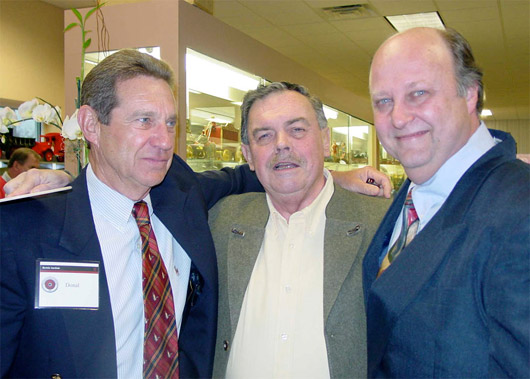