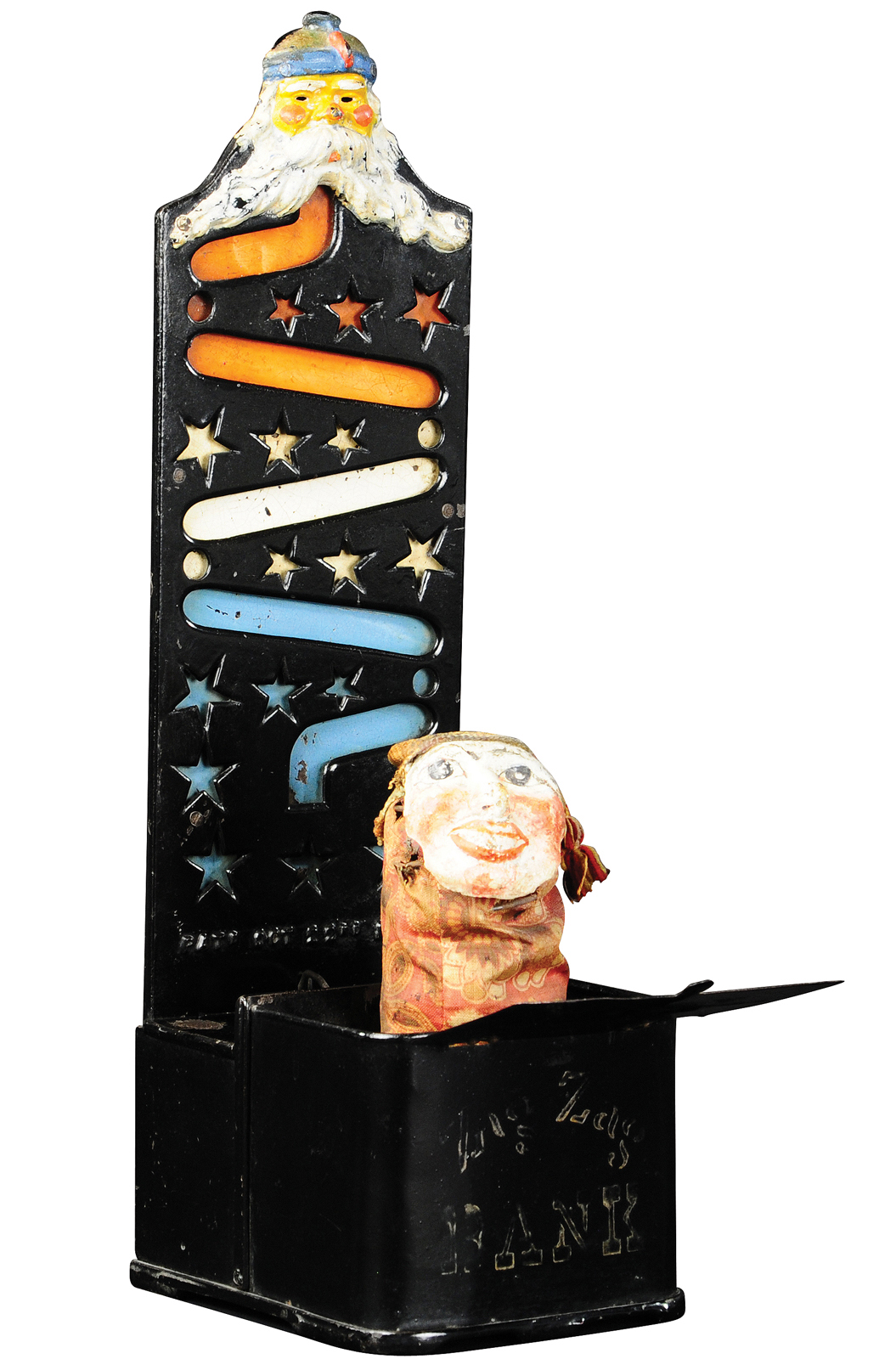 VINELAND, N.J. – Washington attorney Max Berry left Bertoia’s gallery on March 28th with a smile on his face – not because Part II of his collection had just been auctioned for $2.92 million, but because of the enthusiastic way in which the toy community had come together over a two-day period to celebrate his lifetime of achievement in the hobby.

“Max was happy to see who the next caretakers of his toys would be,” said Bertoia Auctions associate Rich Bertoia. “He was very focused throughout the entire auction and did a lot of positive nodding.”

Added to the $3.1 million realized by Part I of Berry’s collection last Nov. 14-15, the March 27-28 auction pushed the series grand total to $6.02 million. Absentee and Internet live bidding was available through LiveAuctioneers; all prices quoted in this report are inclusive of buyer’s premium.

The top-selling lot was a J. & E. Stevens Darky Kicking Watermelon mechanical bank designed by Charles A. Bailey and patented in 1888. One of three known examples, its long and illustrious trail of provenance includes pioneer collectors Wally Tudor, F.H. Griffith, Leon Perelman and Stan Sax. It sold at the upper end of its estimate range for $270,000. 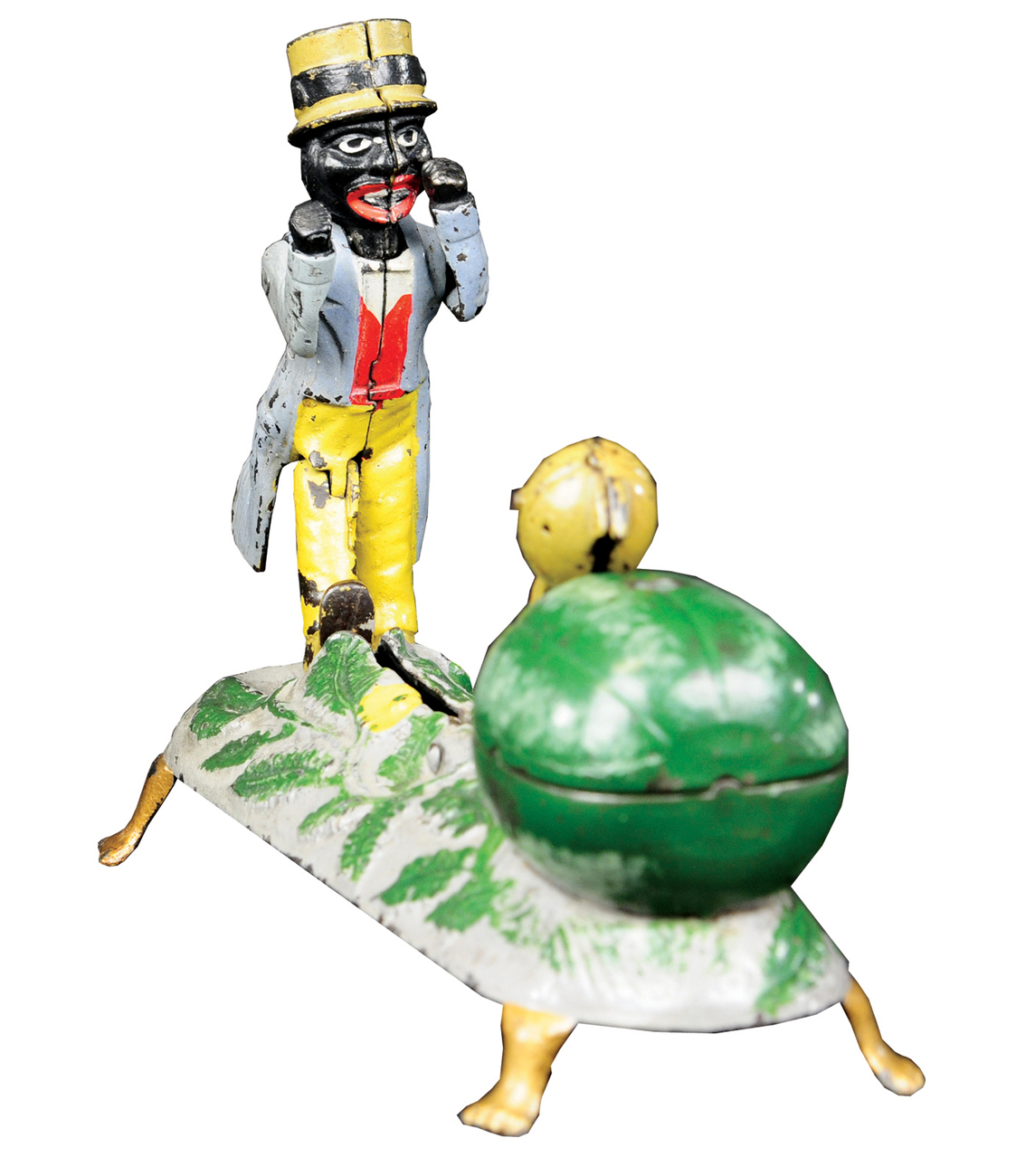 “Banks of that level don’t come around very often, and when they do, it’s never a problem to sell them. It’s no different than selling the world’s best paintings. Collectors stand in line for the opportunity to bid,” said Bertoia. The buyer, who participated over the phone, prefers to remain anonymous. The only clue Bertoia would share was that the person is “not known in the bank-collecting world but has been buying privately over the past few years.” 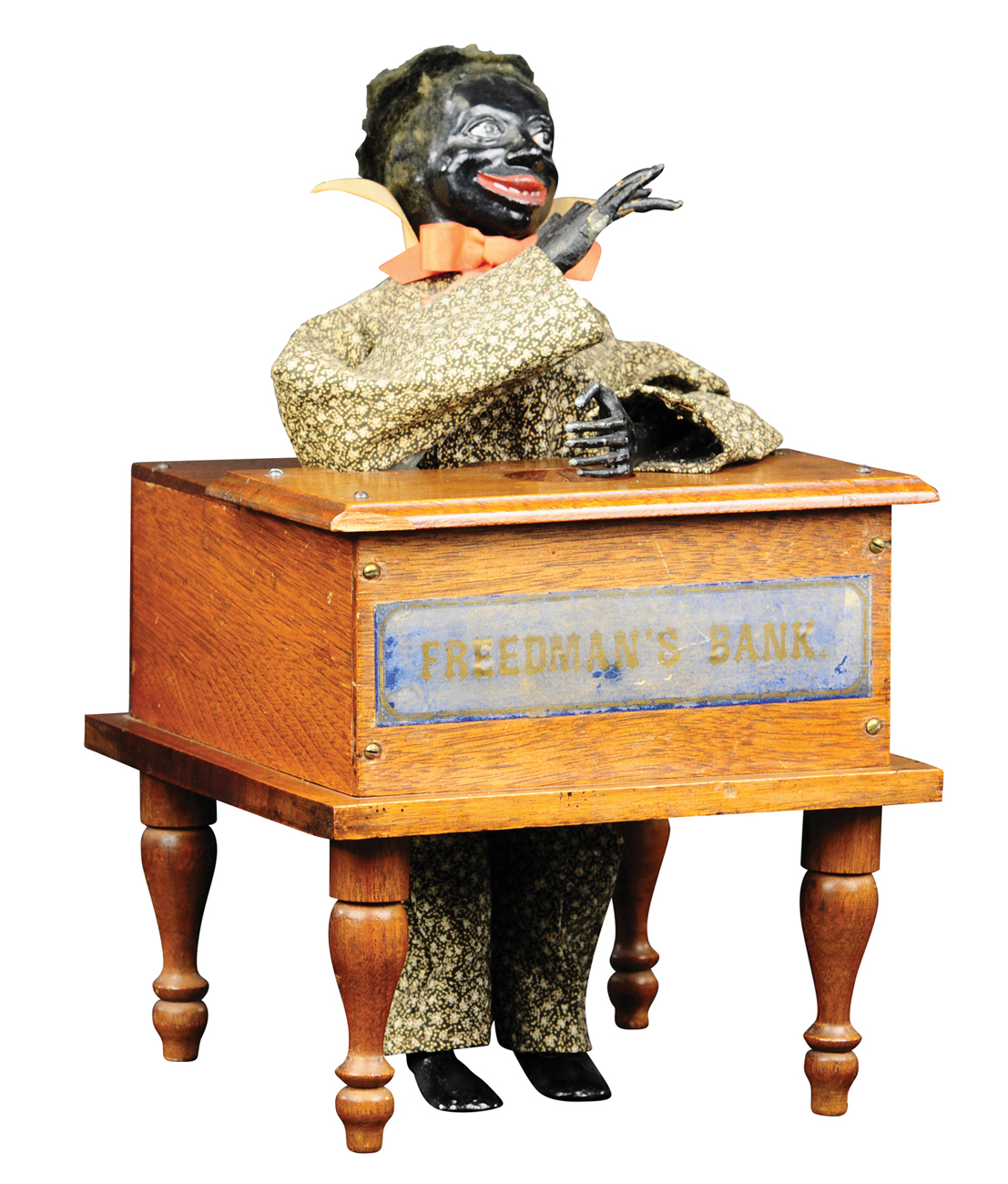 In 1939, an antiquities dealer purchased the Freeman’s bank from a source in Mexico for $8, then resold it to Fostoria, Ohio banker and collector Andrew Emerine. The African-American-themed bank later passed to another legendary collector, Mosler Safe Company president and CEO Edwin H. Mosler Jr. After Mosler, the bank’s next owner was the aforementioned Stanley P. Sax, whose collection was auctioned by Bertoia’s in 1998. Max Berry, who purchased it at the Sax auction, always regarded the bank as one of the greatest treasures in his collection.

“The Zig-Zag generated more interest and bids than any other item in the sale,” said Bertoia. “You could have heard a pin drop during the auctioning of all of the top three banks. People were very respectful of the amounts of money being spent for them.”

Yet another collector from New York prevailed on a Charles A. Bailey lead bank known as Chinaman in Rowboat, one of fewer than 10 such banks known to exist. Against an estimate of $80,000-$90,000, it sailed out the door for $96,000. 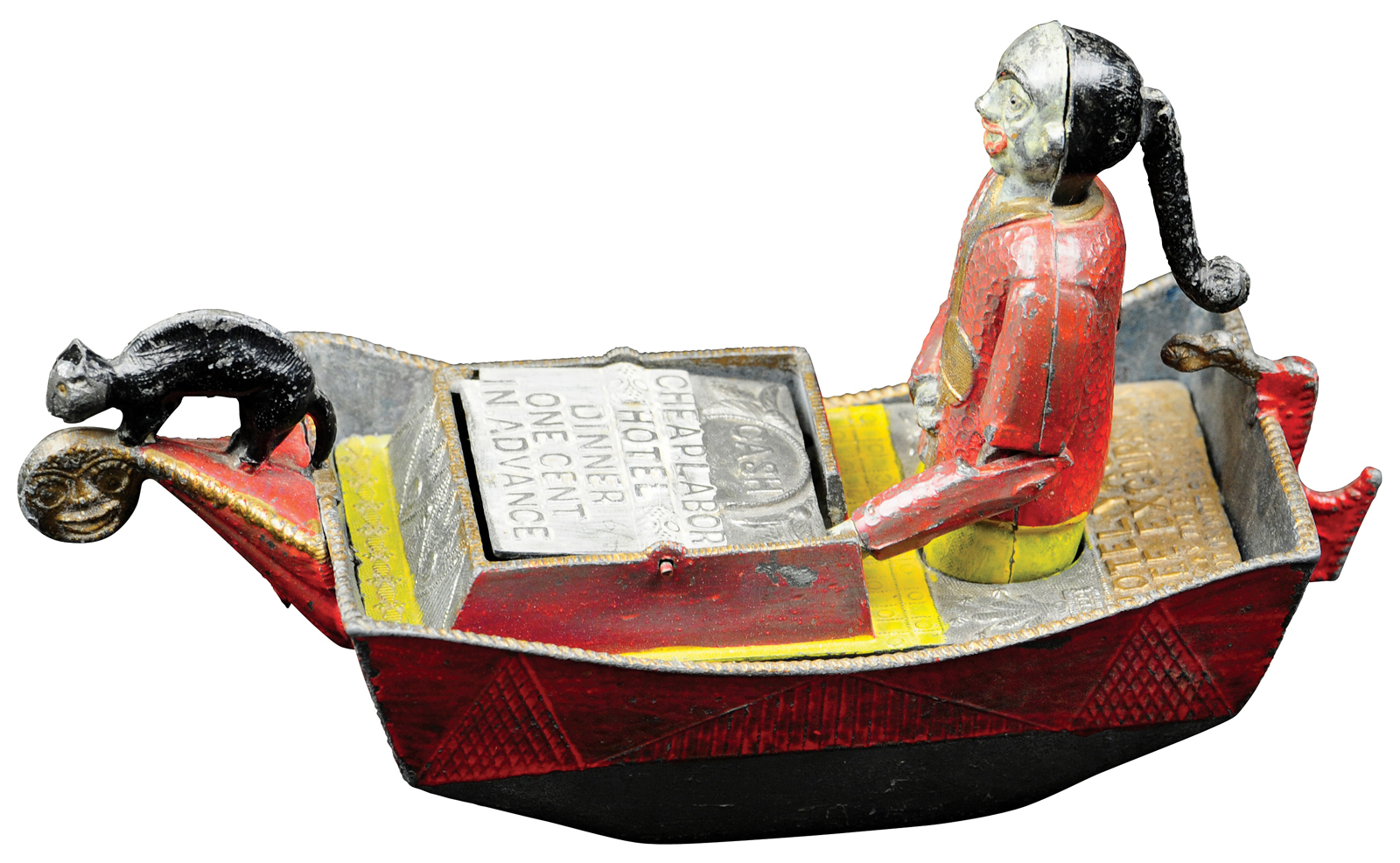 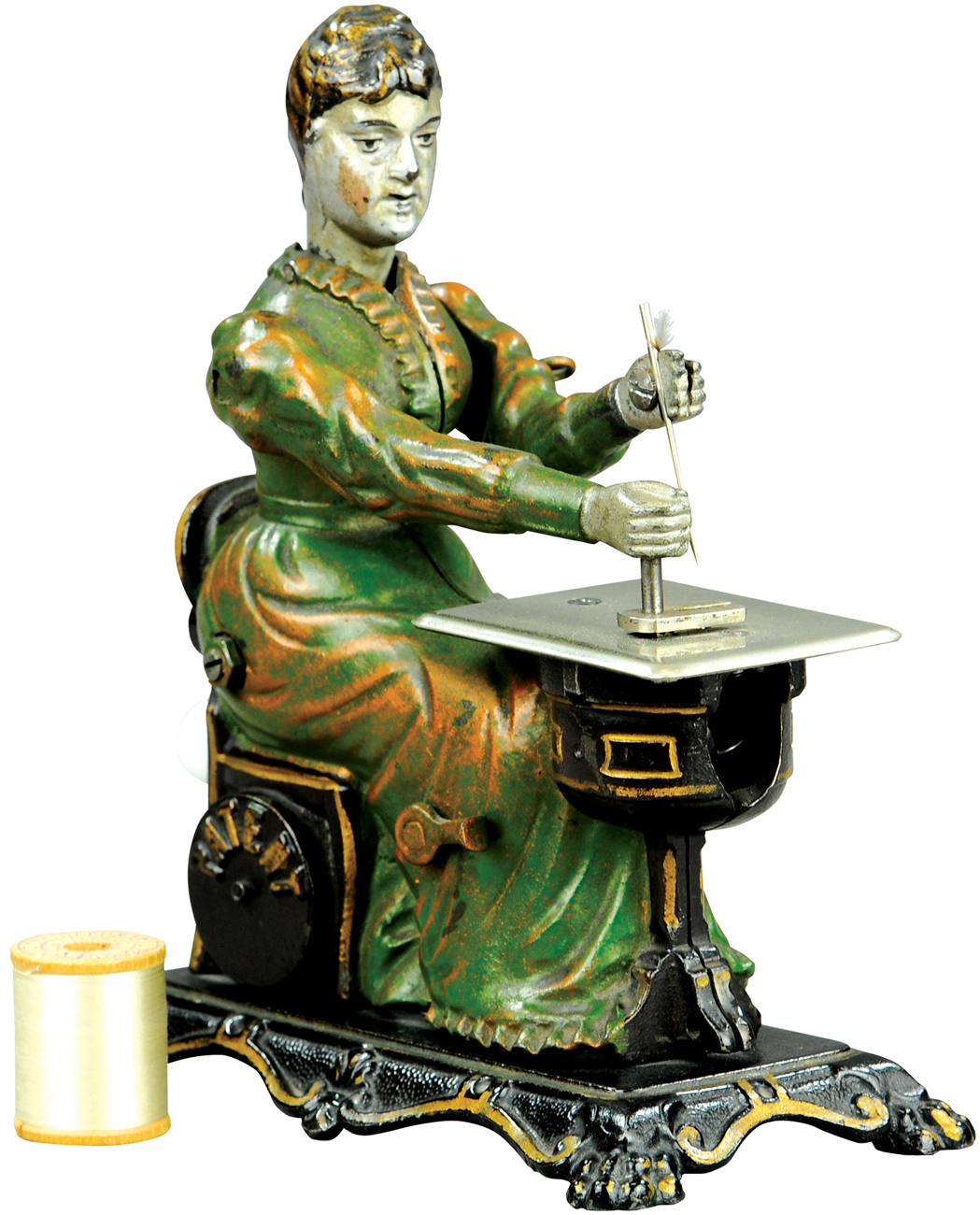 A diminutive circa-1900 painted cast-iron mechanical bank of unknown origin was emblazoned “Schley Bottling Up Cervera.” This identification referred to Captain Winfield Scott Schley, who helped “bottle up” or destroy the Spanish fleet, which was commanded by Admiral Pascual Cervera in Santiago Bay. It sold for $26,400.

From a fine selection of tin clockwork banks in Berry’s collection, a beautiful Ding Dong Bell bank by Weedens, with superior original paint, rang up a winning bid of $64,800. 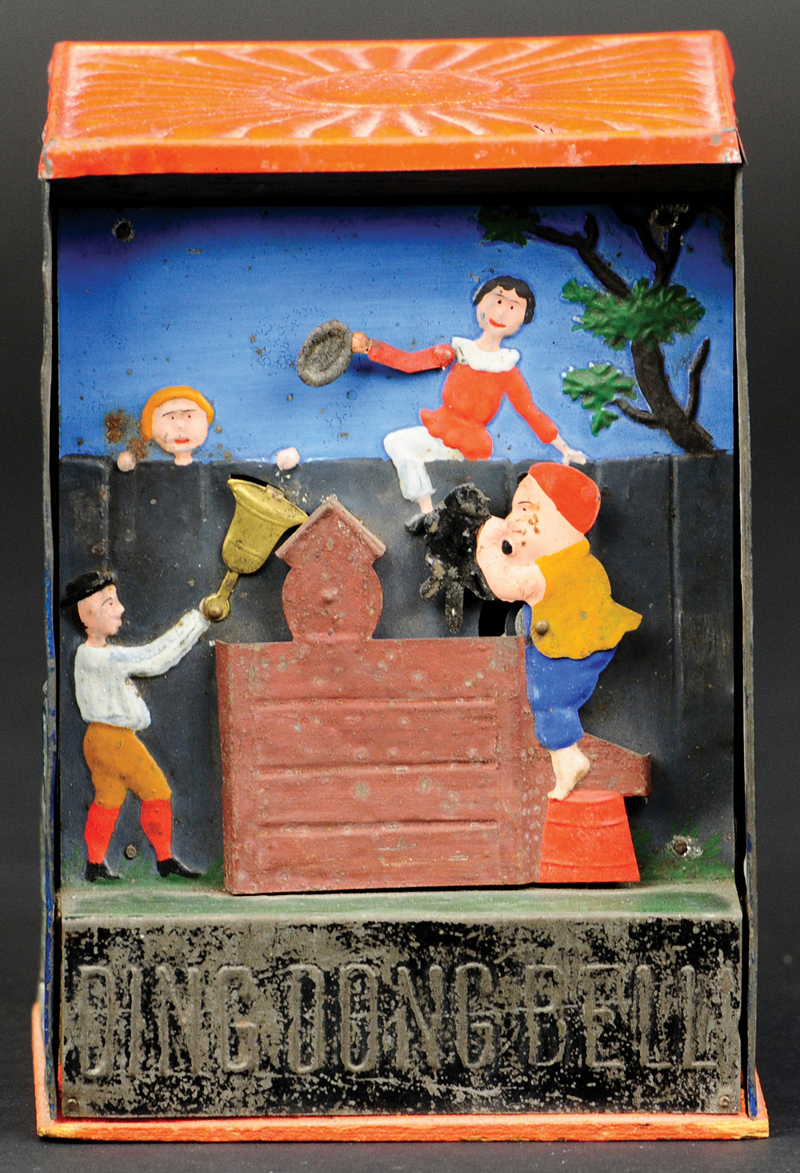 A circa-1913 lever-activated Empire Cinema tin bank finished in brilliant primary colors and depicting a movie theater filled with people doubled its low estimate to close at $24,000. 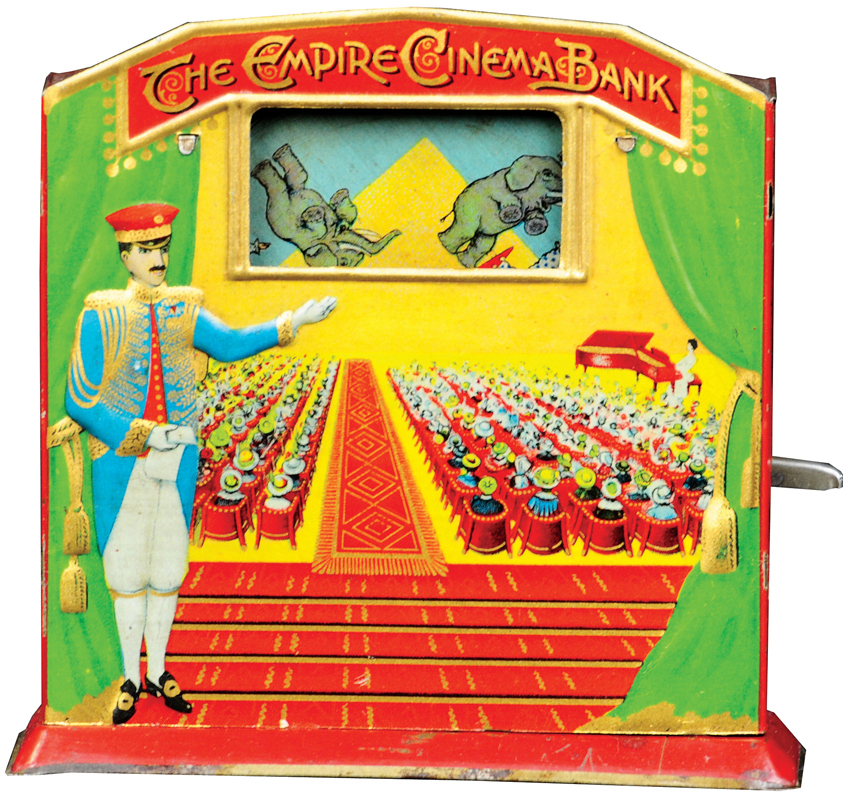 Bell toys were led by an Althof Bergmann open gig pulled by a pair of goats and driven by a cloth-dressed boy. It doubled its high estimate at $24,000. A Mary and Her Little Lamb sold over the phone to a Midwestern buyer for $14,400. “The new owner called and thanked us after receiving the toy. He has an extensive collection of bell toys and said he had never seen one in such fine condition,” Bertoia said. 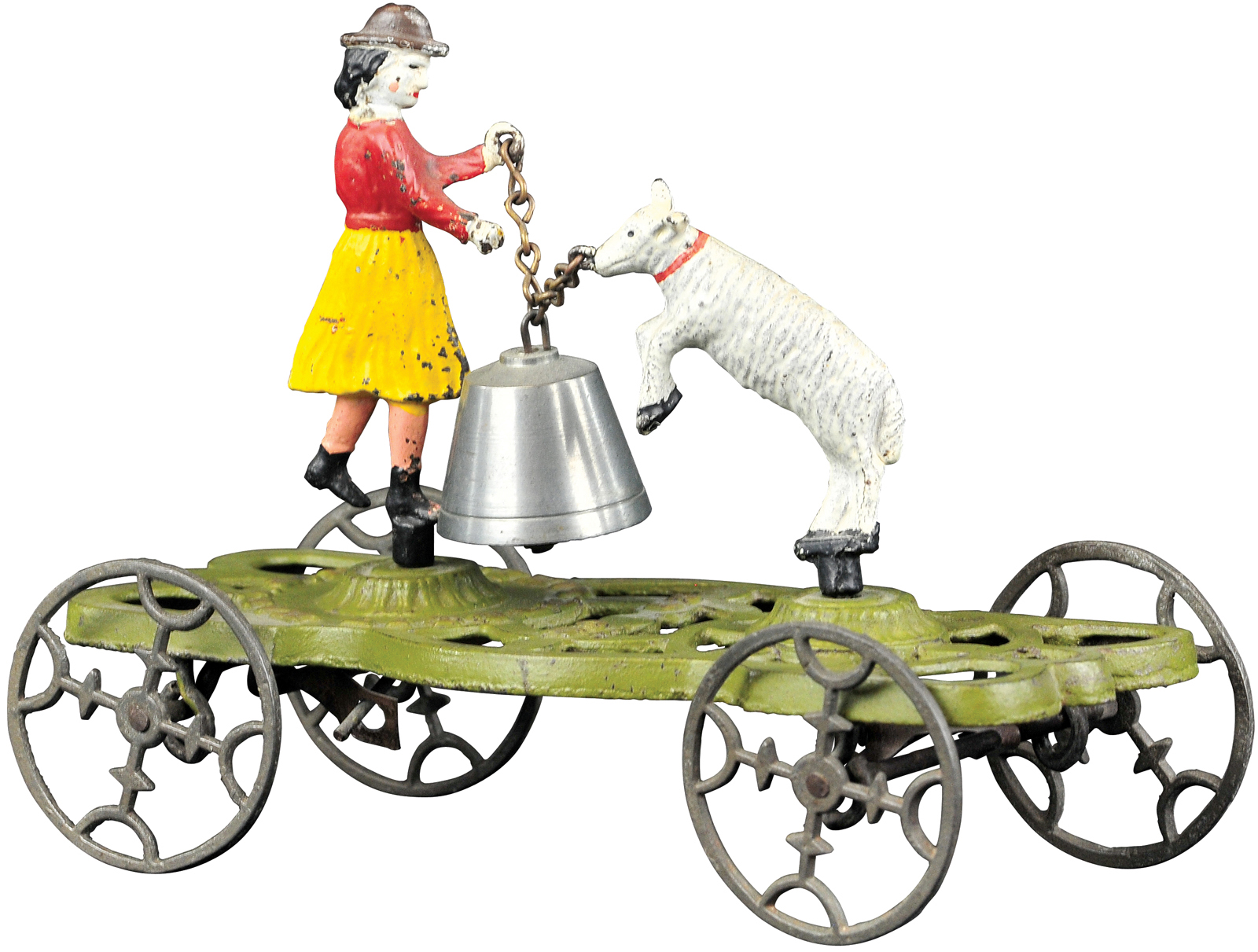 Many were surprised by the consistently high bids placed on Berry’s penny toys. “We’ve never before seen that level of attention or such active bidding for penny toys,” Bertoia said. “Anyone with a significant collection of penny toys should be river dancing over the prices that were paid.” A Man on Bike penny toy reached an amazing $3,900, while a whimsical Man Chasing Woman realized $2,700. 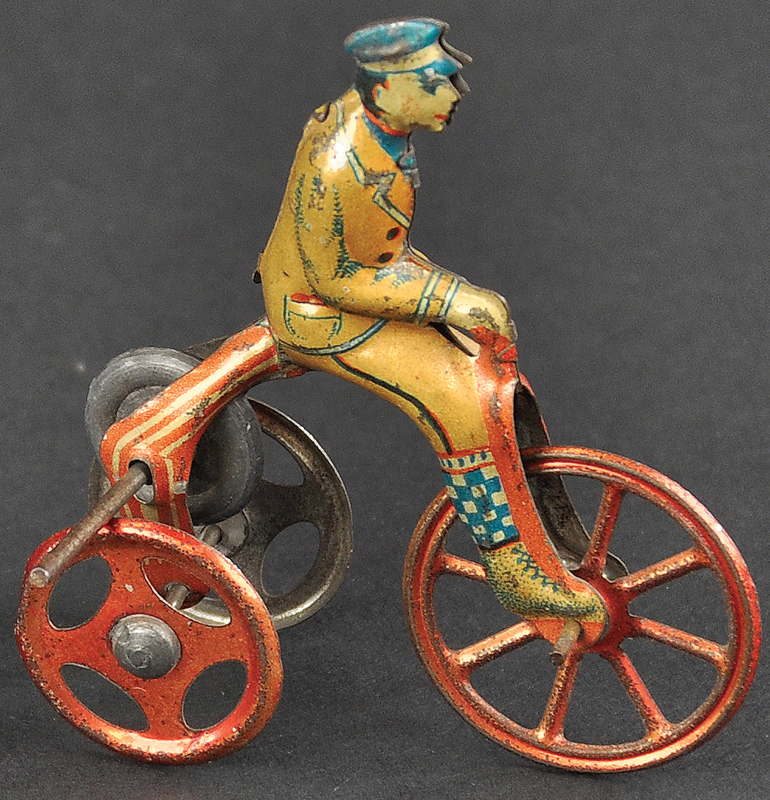 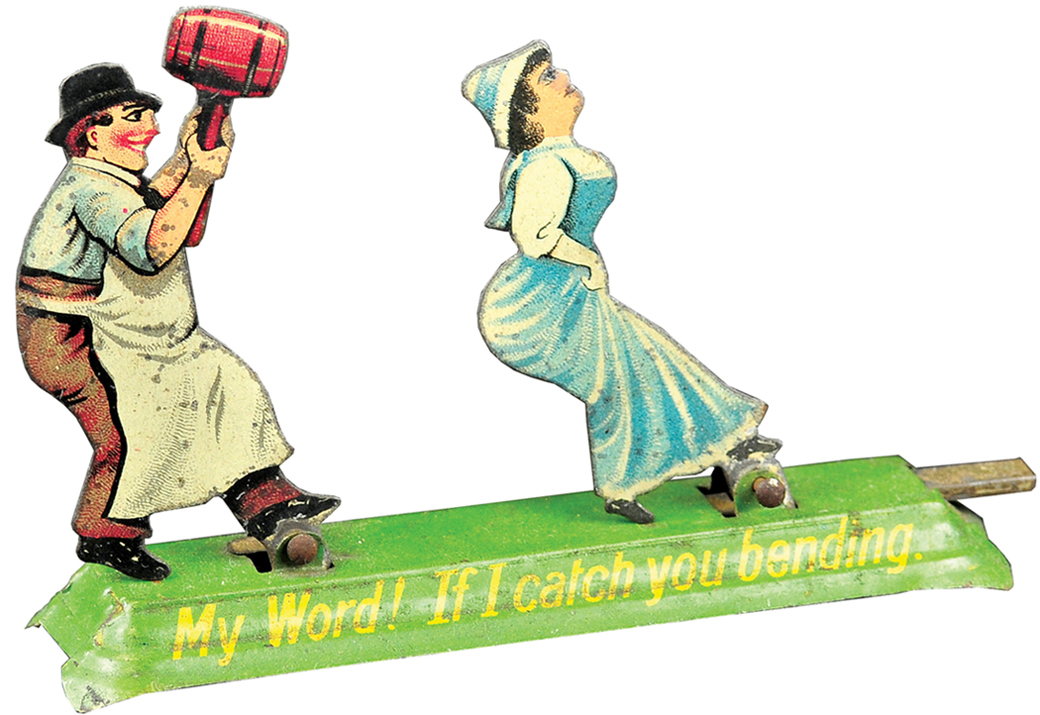 Jeanne Bertoia, owner of Bertoia Auctions, said the sale and preview combined to form “a perfect weekend for the entire Berry family, the Bertoia family and all who attended.” She described the preview as “active and enthusiastic. You want to hear a lot of chatter at a preview because that means people are excited.”

“It has been such an enjoyable experience for us, we wish there were three more parts to the sale,” she continued. “But when you have banks and toys of such a high level of rarity and quality, even a two-part sale is remarkable. I can’t think of any museum that has toys like the ones we auctioned.”

Bertoia’s will conduct a 1,400-lot toy and train auction on May 8-9, 2015 featuring Part I of the late Bill Moody’s Metalcraft advertising truck collection, a private collection of Hispano-Suiza toys and pedal cars, and nearly 250 lots of trains from the late Michael Cann’s collection. Absentee and Internet live bidding will be available through LiveAuctioneers.

To contact Bertoia Auctions about consigning to a future sale, call 856-692-1881 or email toys@bertoiaauctions.com. Visit Bertoia’s online at www.BertoiaAuctions.com.