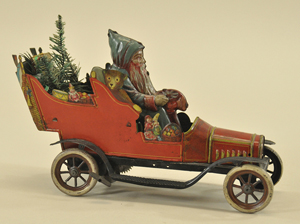 VINELAND, N.J. – An exceptional circa-1909 Marklin tinplate steam-powered boat known as the Priscilla sailed to the top-lot position at Bertoia Auctions’ $1.6 million Toys for the Mantle sale held Nov. 12-14, realizing $63,250 against an estimate of $35,000-$45,000. The imposing 19-inch vessel exhibited fine original paint and intact original lifeboats, sailor figures and masts.

The toy had been discovered many years ago in a Chicago attic and subsequently passed through the hands of several owners before being acquired by the late Bill Bertoia, co-founder of Bertoia Auctions.

“My brother held on to it for many years before selling it to the consignor,” said Bertoia Auctions associate Rich Bertoia. “It’s one of those great toys that was never shopped around. Collectors knew about it, but it never came up for sale. Finally it did, and now it’s the property of a private collector in Europe.”

Bertoia noted that it is rare to find large tin boats from the early 20th century that are as pristine as the Priscilla. “So many were put into water for play, and nothing ruins tin and paint like water. The Priscilla, with its incredible detail, almost certainly would have been sold to a wealthy person to put on the mantel for display.”

The seemingly unquenchable desire for antique German-made toys extended to other manufacturers, as well. A Bing 1 gauge train set with components including a 4-4-0 “Express” electric locomotive and tender, Wagon-Lits sleeping car and hand-painted Speisewagon dining car achieved more than four times its high estimate at $12,650.

The first-class rails were shared by a circa-1927 American Flyer President’s Special boxed train set, complete with 4-4-4 NYC-style locomotive, West Point Pullman, Annapolis observation car and baggage car. Each of the cars retained its original individual box with wax-paper wrapping. In near-mint condition, the set sped to an $11,500 finish, against an estimate of $2,000-$2,500.

“The American Flyer set was found in a basement in Brooklyn and was in gorgeous condition,” Bertoia said. “Of all the lots in the sale, that was the one that generated the most interest. In fact, there were more calls about that train than any other auction lot I can remember for quite some time.”

The same Brooklyn basement produced a Fischer (Germany) Toonerville Trolley train, copyright 1922, with original box. The three train tracks that accompanied the toy solved a long-time mystery, Bertoia said. “There are other examples of this toy with tracks, but the tracks have not been marked. Before now, no one knew who the toy’s manufacturer was. The tracks that came with the set we auctioned were stamped with the fish symbol that was the company logo for Fischer. Even a small discovery of this type is exciting to collectors.” The 7-inch Toonerville Trolley elicited a winning bid of $4,025.

Rich Bertoia remarked that because it was a three-day sale with more than 2,000 lots, there were peaks and valleys noted in the Toys for the Mantle sale. “But there were more peaks than valleys because we made sure there was a really fun mix of toys,” Bertoia said. “For the past two years we’ve been offering collectors the very best of automotive toys with the Donald Kaufman collection – you can’t add a postscript to a collection like that. We felt the time was right to offer a variety of toys, and it seems the collectors agreed.”

Another scarce American toy from the 19th century, an Ives “Peek-A-Boo” clockwork cat that lifts its furry head from under a pot lid, peers out, and sticks out its tongue in an amusing action, was actually depicted in the company’s 1893 catalog. It sold for an above-estimate price of $8,050.

Once again, the Christmas collectors turned out in force for a session brimming with ornaments, store displays, belsnickles, candy containers and diecuts. There were many unusual pieces available, like a handcrafted, polychrome-painted Erzgebirge chandelier laden with folk art charms, birds, floral decorations and religious figures, which sold for $10,350. Another highlight was the rare, 26-inch-tall painted chalk Father Christmas store figure carrying a switch for naughty children and toys for their well-behaved siblings. It earned $10,925. The star of the holiday section, however, was a Fischer tinplate clockwork toy with Father Christmas driver and teddy bear passenger that oozed charm and attracted bids from across the collecting spectrum.

“The Fischer Santa car is rare to begin with, and it crosses over into many categories – automotive, European tin, teddy bears, and of course, Christmas,” said Bertoia. “Pricewise, it did exactly what we guessed it would do.” The festive auto exceeded its high estimate to ring the register at $25,875.

Jeanne Bertoia, owner of Bertoia Auctions, said she was “extremely pleased” with the turnout for the sale, which drew strong participation in the gallery as well as on the phones and online. Nearly 27% of the lots – 233 in total – sold via the Internet through LiveAuctioneers.com.

Jeanne said exact dates will soon be confirmed for all sales to be conducted in the first half of 2011: “On March 25th and 26th, we will be offering the toy collection of the late Donal Markey, who was a very well-respected dealer and collector. Everything he acquired over his many years of collecting was in beautiful condition; he bought only from the top tier. On April 15 and 16, we will auction the last of the Donald Kaufman automotive toys in a sale we’ve nicknamed ‘the final lap.’ And for June we’re planning a mixed sale of toys, trains and banks. It looks like another very busy and exciting year is on the horizon for Bertoia’s.” 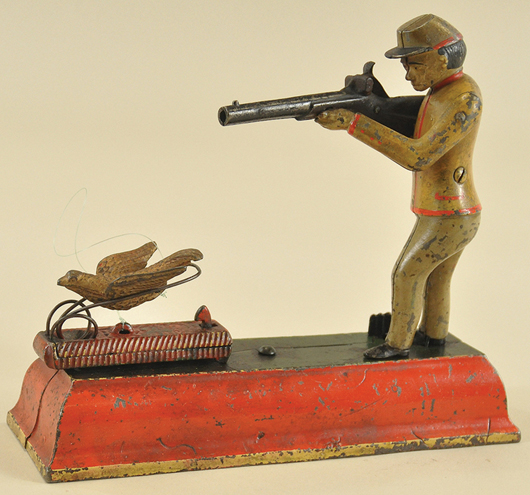 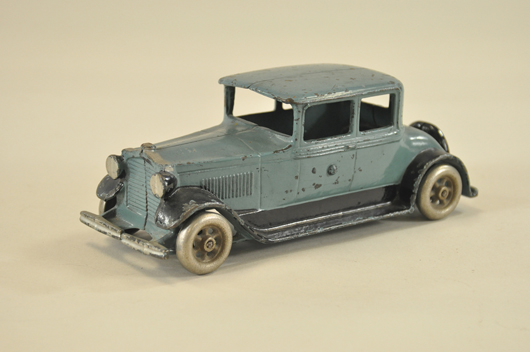 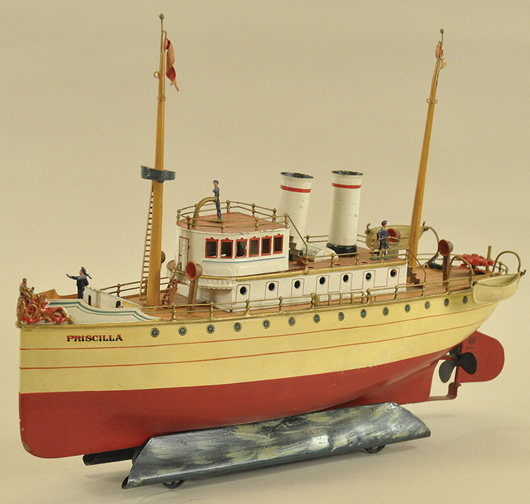 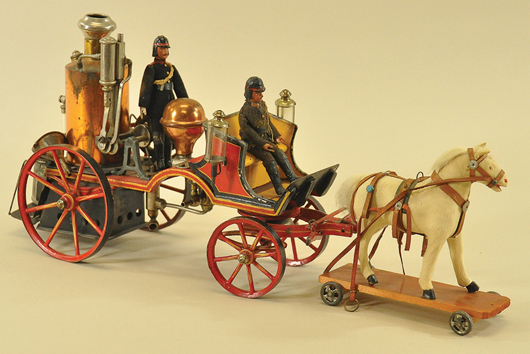 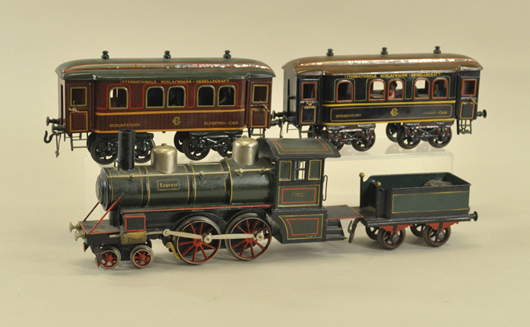 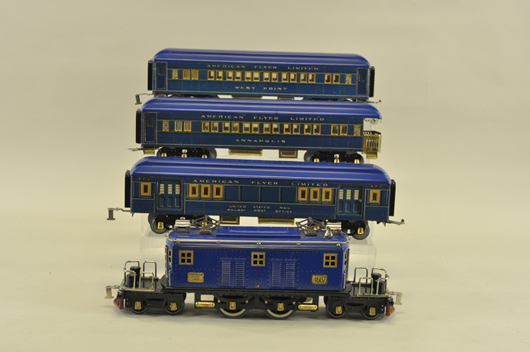 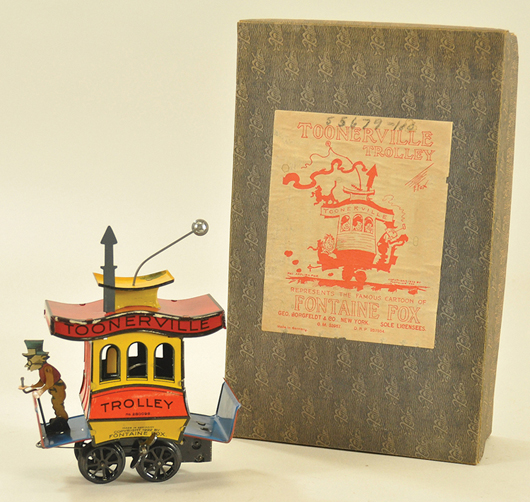 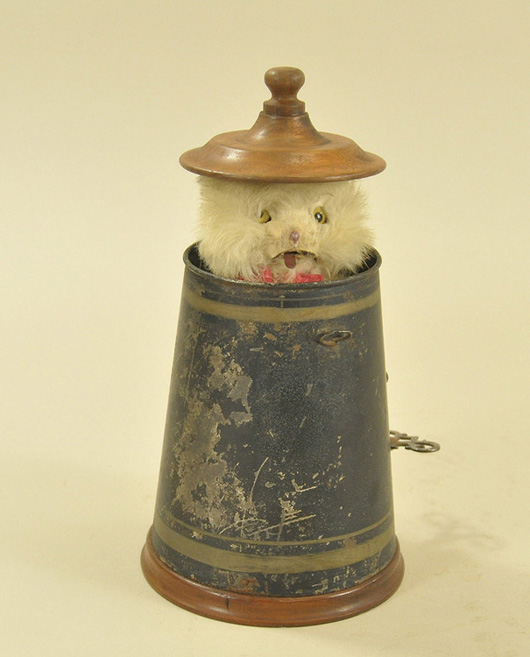 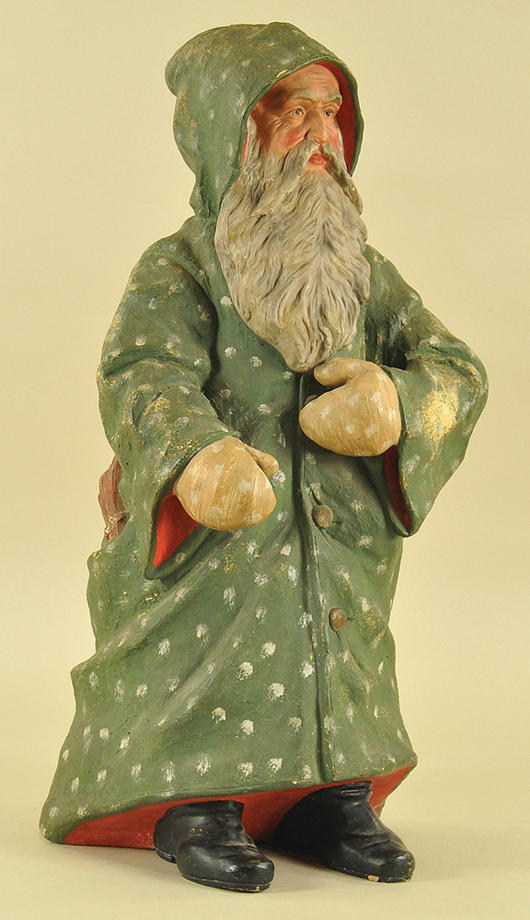