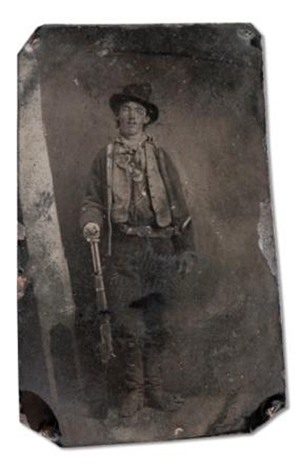 DENVER (AP) – What is believed to be the only surviving authenticated portrait of Billy the Kid was auctioned in Denver on Saturday evening for more than $2.6 million. The tintype was purchased by private collector William Koch at Brian Lebel’s 22nd Annual Old West Show & Auction.

The tintype is believed to have been taken in 1879 or 1880 in Fort Sumner, N.M. It shows the outlaw dressed in a rumpled hat and layers of clothes, including a bulky sweater. He’s standing with one hand resting on a Winchester carbine on his right side and a Colt revolver holstered on his left side.

Tintypes were an early form of photography that used metal plates. They are reverse images, and the Billy the Kid tintype led to the mistaken belief that Billy the Kid was a lefty. The myth inspired the 1958 movie The Left Handed Gun, starring Paul Newman as Billy.

Billy the Kid gave the image to a friend, Dan Dedrick, and the tintype has been owned by his descendants, the Upham family, ever since. It has only been publicly displayed during the 1980s at a museum in Lincoln County, N.M.

McCracken said it’s recognizable around the world as a classic image of the Old West.

“There’s only one photo of Billy the Kid, and I think that’s why it captivates people’s imagination,” she said before Saturday’s auction.

The tintype was auctioned off along with more than 400 other Western-themed items, including documents from Buffalo Bill’s aborted divorce, Native American antiquities, and a painting from Andy Warhol’s “Cowboys and Indians” series depicting a Navajo woman with a baby on her back.

As seen in this promotional poster, Paul Newman starred in the lead role of Billy the Kid in the 1958 Warner Bros. film The Left Handed Gun. Fair use of low-resolution copyrighted image used to provide illustrative commentary on Newman’s depiction of the character Billy the Kid. Image sourced through wikipedia.org.