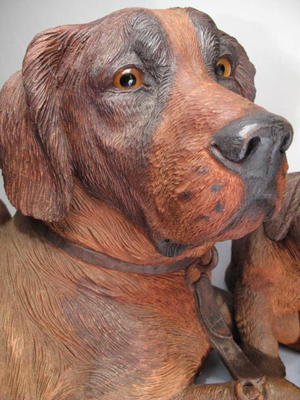 NAPLES, Fla. – There was plenty of bark and one winning “bite” at Auctions Neapolitan’s Jan. 23 standing-room-only sale as an exceptional 39-inch-wide Black Forest carved tableau of a St. Bernard dog and her three playful pups claimed top-lot honors at $30,590. Attributed to Swiss artist Walter Mader, the circa-1900 carving featured realistic feathering to the dogs’ coats, hand-colored limbs and glass eyes. The substantial 33-lb. artwork had been estimated at $6,000-$8,000.

“There was tremendous interest in that particular piece,” said Kathleen Pica, owner of Auctions Neapolitan. “There’s a sizable contingent of collectors worldwide for Black Forest pieces, and many of them were bidding, not only on the floor but also on the phones and via the Internet. What was unusual was that the bidding stayed strong throughout – there was no lull or hesitation once the lot was announced.”

The winning bidder, a major collector of Black Forest art for the past 30 years, participated by phone from his home in Colorado. “This was an incredibly rare piece, in beautiful condition,” the buyer remarked after the sale. “There’s a larger one in the museum in Brienz, Switzerland – the town where 2,000 carvers lived at the turn of the century – and there are two others in separate private collections in Paris. The two owners in Paris have stated that they will die with their pieces, so those examples are completely off the market.”

The buyer added: “Walter Mader’s only subjects were dogs – he didn’t carve anything else. Even though he never signed his work, it’s unmistakable. When you see the expression on the dogs’ faces and the flow of the carving, you know exactly who carved it.”

The word spread quickly about the St. Bernard grouping in Auctions Neapolitan’s sale, the buyer said. “My uncle called me from the Miami Beach Antique Show, which was taking place around the same time as the auction, and said there were many dealers aware of it and talking about it. You’d be amazed how many calls I got from fellow collectors, asking my opinion about its authenticity. I feel that even at the price I paid, I got a very good buy.”

Kathleen Pica said the tableau’s consignor, a Naples-area man, was “delighted with the result,” adding that he was also the consignor of the top lot in Auctions Neapolitan’s December sale – a C.E. Dallin (1861-1944) bronze of an Indian scout on horseback that sold for $25,500.

“I think the fact that we kept the auction estimate low helped the dogs achieve their excellent price,” Pica said. “I have found that when an auction house puts too high an estimate on an item, it scares off some of the bidders. They assume there’s a high reserve on it, and they don’t even bother.”

The vast majority of antiques, fine and decorative art offered by Auctions Neapolitan comes from Naples-area homes and estates. “Less than two percent of what we offer comes from dealers, and that has been the case since I first began conducting auctions in Naples over a decade ago,” said Pica.

Fine paintings were among the other highlights in the Jan. 25 sale. An Anne Packard (Massachusetts, b. 1934-) oil-on-board depiction of saltbox houses made $1,380; while a Josephine Osnaghi (1861-1939) oil-on-panel still life surpassed its estimate to settle at $1,667.50. Nineteenth-century French artist Maurice Rousseau’s pastoral oil painting titled The Sheepfold achieved $1,142.50.

One-fourth of the auction lots sold to online bidders through LiveAuctioneers.com. “The Internet participation was very strong,” said Pica. “Postsale statistics indicated there were 43,000 hits to our online catalog for this sale, with 10,000 page views on the first day it published.” The top-selling Internet lot was a 15¾-inch (dia.) Lalique Cote d’Or charger adorned with three nymphs surrounded by grape vines. A rare, early version with the Lalique signature on verso, it sold for $1,782.50. 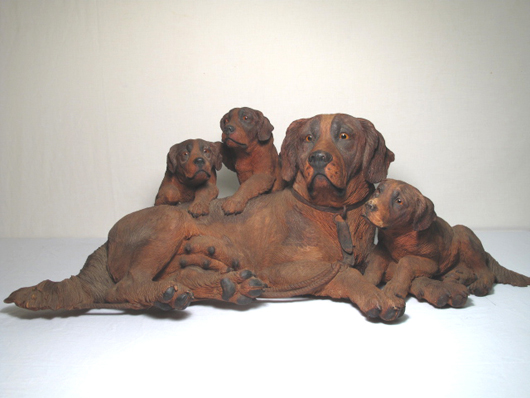 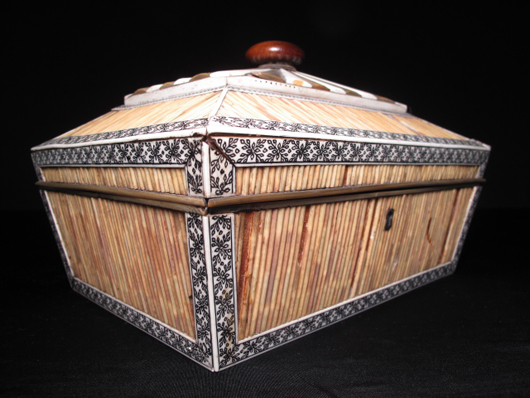 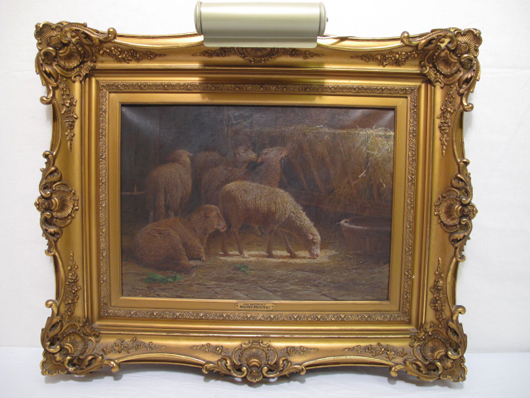 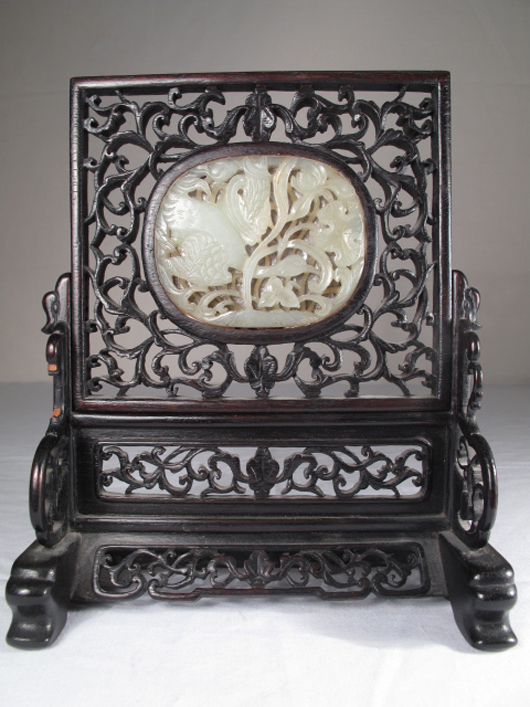 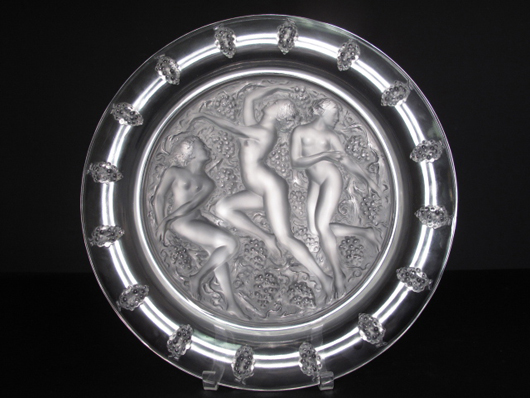 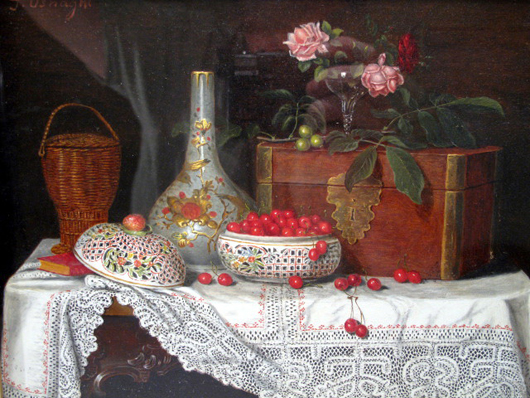 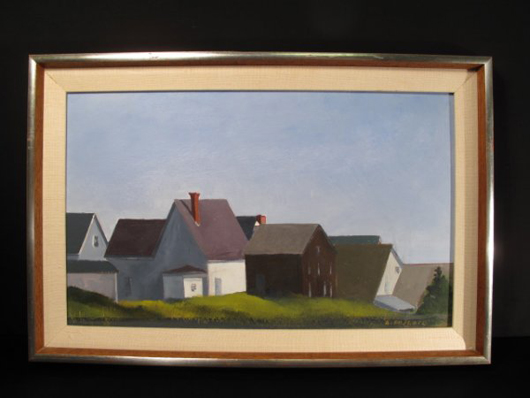 Massachusetts artist Anne Packard (b. 1933-), who is known for her seascapes, painted this depiction of saltbox houses on a sunny day. It sold at auction for $1,380. 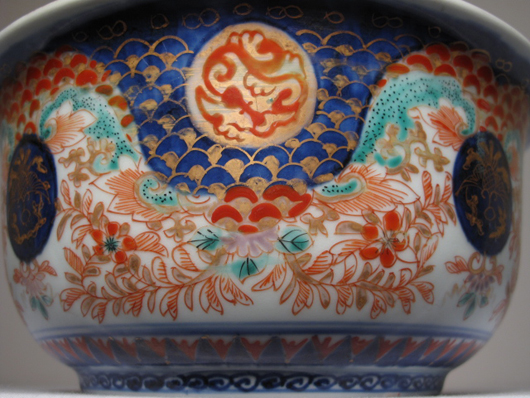