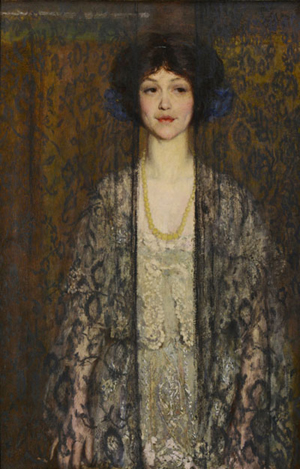 The most visited lot in the online catalog was this painting of a young woman behind black lace curtains by Boston Impressionist Philip Leslie Hale. It ultimately sold for $42,120 (est. $25,000-35,000). Case Antiques image.

KNOXVILLE, Tenn. – A Boston School painting by Philip Leslie Hale and a Simon Willard labeled tall-case clock tied for top lot status at the Spring Case Antiques Auction, held May 18. The painting and clock came from the estate of Margaret Wemyss Connor of Nashville, whose collection of primarily American art and antiques accounted for 178 lots in the sale. The other 550 lots in the auction hailed from other estates and collections, including an institutional collection of Native American objects.

More than 1800 bidders participated by phone, written absentee bid, by Internet and in person, including 150 floor bidders.

The painting, titled La Donna/Mi Velata, depicted a brunette beauty smiling enigmatically from behind sheer black curtains. The artist was Philip Leslie Hale, a Boston impressionist painter whose writings and teachings about art somewhat overshadowed his actual works of art during his lifetime (1865-1931) but whose work has become more sought after in recent years. The painting attracted multiple phone and Internet bidders, but a floor bidder took it home for $42,120.

The Simon Willard clock with Roxbury case, which also hammered down for $42,120, retained its original Isaiah Thomas engraved and printed label and French style feet, and sold to a phone bidder. Running a close third to the painting and clock was a 3.04 carat diamond solitaire ring (H color, VS2 clarity) in a 14K white gold setting, which sparkled at $37,440 (est. $25,000-30,000). All prices in this report include the buyer’s premium.

There were four Erte bronze Art Deco style sculptures; each sold in the $2,500 range. A Smoky Mountain landscape by Louis E. Jones (1878-1958) led the Southern paintings at $4,914, while a pair of Jones etchings tripled their estimates at $1,112. Other regional art included an oil on canvas depiction of the Old Absinthe House in New Orleans by Cornelius Hankins (Mississippi/Tennessee, 1863-1946), $1,755; a surreal watercolor by Werner Wildner (Nashville, 1925-2004) of owl and gnome, $1,287; and a watercolor mountain scene by Mayna Avent (Tennessee, 1868-1959), also $1,287. A charcoal profile portrait of a man in a “fancy” painted chair, possibly an early image of James K. Polk, attributed to itinerant artist Charles Burton, who painted several prominent Southern subjects in the early 1800s, hammered down for $1,404.

“Brown” furniture, a tough sell in recent years, showed some bright spots. A Federal inlaid cherry sideboard attributed to Eastern Kentucky or Western Virginia, from the Connor estate, served up $10,530, and a rare Tennessee hunt table, the same height as a hunt board but with a top only 28” wide, brought a full huntboard-size price at $6,786 (est. $2,000-$2,500). It had descended in the family of a Tennessee politician. A cherry chest of drawers from the Connor estate with top center prospect door, bearing a documentation label from the Museum of Early Southern Decorative Arts, competed to $5,382 against a $2,500-$3,500 estimate, even with replaced feet.

“It was a curious piece,” noted company president John Case. “While the form is associated with Mecklenburg County, Virginia, this piece was documented in the Art and Mystery of Tennessee Furniture, has been in Middle Tennessee since at least 1920, and had secondary woods consistent with Middle Tennessee versus Mecklenburg County. MESDA told us there is a possibility it was made by a cabinetmaker who moved to the Nashville area from Virginia.”

Two Chinese watercolor on silk scroll paintings shattered their estimates. Both were believed to date from the early Qing period and were estimated in the hundreds range due to condition issues, but drew heavy attention from Chinese bidders. One, depicting figures on a terrace, competed to $13,455; the other, with a mountain landscape design, hit $11,700. Also attracting international interest was an ancient Near Eastern silver vase with heavy repousse design, which shot to $3,042 against a $250-350 estimate. A pair of large Japanese Imari floor vases with crane designs sold for $1,736, while a Famille Rose vase with celadon background and applied lizard handles brought $1,053. A small blue and white sweetmeat dish with Chinese-style decoration, made by Worcester during its Dr. Wall period, doubled its estimate at $744, and a pair of English blue and white pierced porcelain baskets attributed to Bow earned $682. A Continental creamware dish with pierced cover and underplate and figural finial brought $702, and two lots of Herend “Queen Victoria” pattern dinnerware, one containing 76 pieces, the other 33, realized $3,276 and $2,808 respectively.

In the Southern ceramics category, an East Tennessee Decker pottery stoneware jug, inscribed C.D. Decker, hammered down for $2,223 (est. $700-900). And there was reaction from the crowd when a single owner collection of miniature whiskey jugs began crossing the block and commanding full-sized price. Two flat-sided jugs from Owensboro Ky., brought $1,112 (est. 200-250), a pair from L.T. Doores of Bowling Green, Ky., brought $819 (est. 250-350), and two from Louisville (including one believed to be from a brothel) brought $761. Three miniature jugs from Nashville earned $527, the same price as a single one inscribed from the Star Saloon in Frankfort Kentucky.

The sale also included a collection of Native American pottery and artifacts, much of it deaccessioned by an East Tennessee institution. An 8-inch-long Native American three-quarter groove ax recovered alongside the Mississippi in Illinois brought $1,638, while a Mississippian grayware stirrup bottle served up $556 and a Caddo bowl with incised “friendship” designs around the rims brought $527. A 1930s Navajo Ye’ii pictorial rug depicting three figures amid cornstalks realized $682.

Metalware highlights included a 120-piece set of Reed and Barton Francis I sterling flatware, $4,329, and a George III tankard with engraved armorial crest, $2,728. A cigarette case with AH monogram by Bruckmann and Sohne, said to have been confiscated from Eva Braun’s apartment during an attempted capture of Adolph Hitler, sold for $819, while a German Art Nouveau style silverplated centerpiece by Orivit with glass bowl tripled its estimate at $1,736. A William Spratling silver and tortoiseshell necklace in the form of joined hands captured $1,989 and a circa 1940 Fred Davis Mexican silver necklace made $1,521. Early brass candlesticks from the Connor collection saw healthy demand. A lot of four Queen Anne-style candlesticks with petal bases lit up at $1,178, and a lot containing two pairs of 18th century brass candlesticks with octagonal sockets and bases brought $1,287.

The signature of Sam Houston, the only person to have been elected governor of two states, Tennessee and Texas, helped propel a Tennessee land grant to $2,106 (est. $1,000-1,200), while an 1805 judicial certification signed by Tennessee’s first governor, John Sevier, earned $1,989 (est. $400-600). An archive of letters from a Pennsylvania Civil War soldier that included a graphic account of the battle of Antietam rallied to $1,736, while an archive of letters from soldiers of the Minnesota 3rd Regiment brought $995. Other items of note in the historical category included a tintype of a Union soldier holding his sword, $744, and a group of four Abraham Lincoln/John Bell campaign lapel pins and tokens, $1,178.

Case is currently accepting consignments for its upcoming auctions. Requests for auction estimates can be emailed along with jpeg photos to photos@caseantiques.com.

View the fully illustrated catalog of the Spring Case Antiques Auction held May 18, complete with prices realized, at LiveAuctioneers.com. 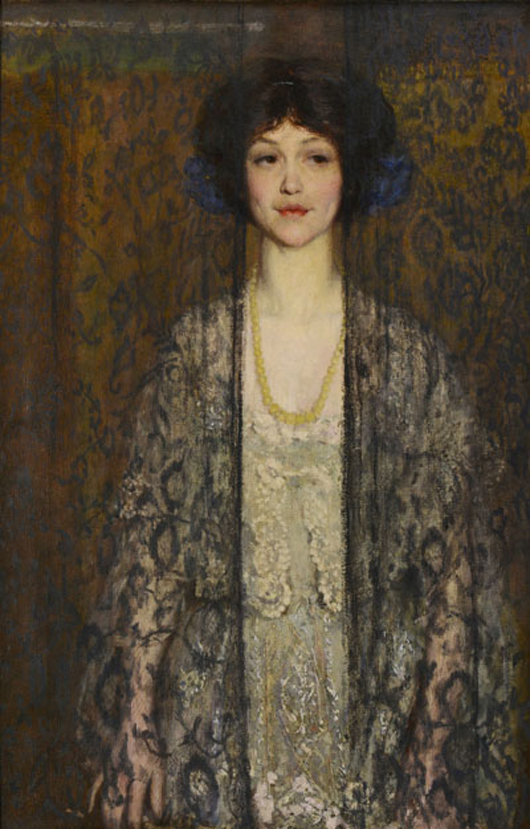 The most visited lot in the online catalog was this painting of a young woman behind black lace curtains by Boston Impressionist Philip Leslie Hale. It ultimately sold for $42,120 (est. $25,000-35,000). Case Antiques image. 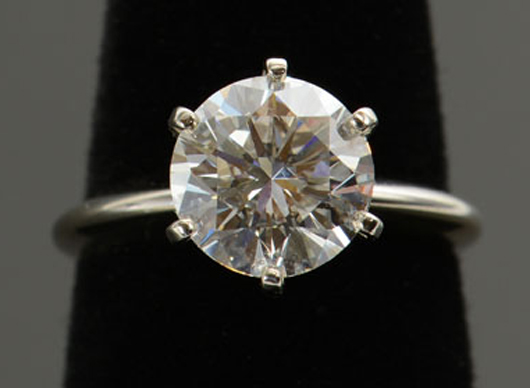 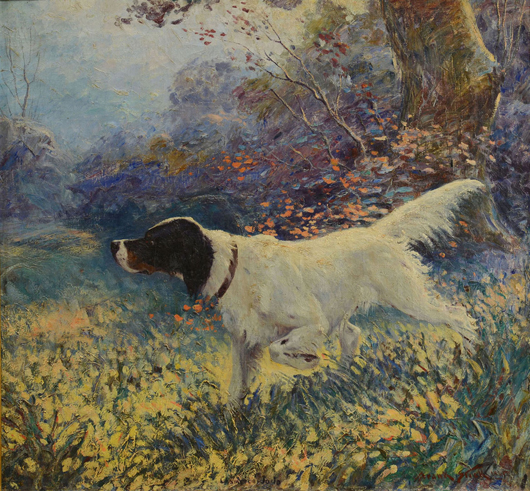 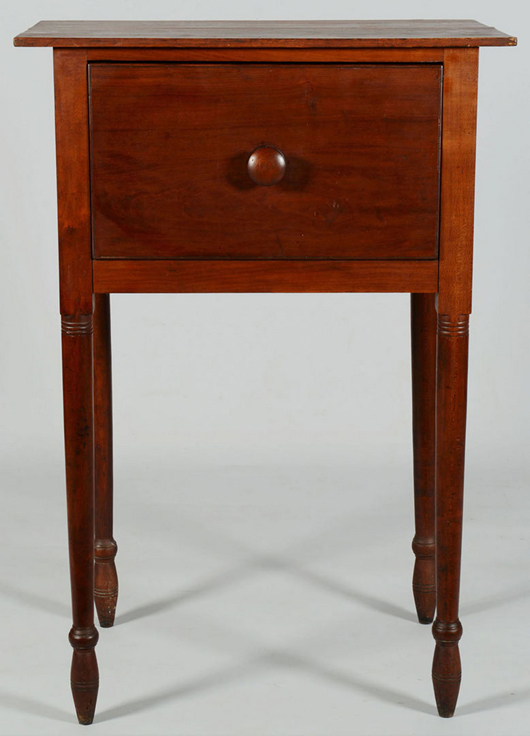 Related to the storied Southern huntboard, but smaller and less commonly found, are hunt tables. This one wore a nice old surface and served up $6,786 (est. $2,000-$2,500). Case Antiques image. 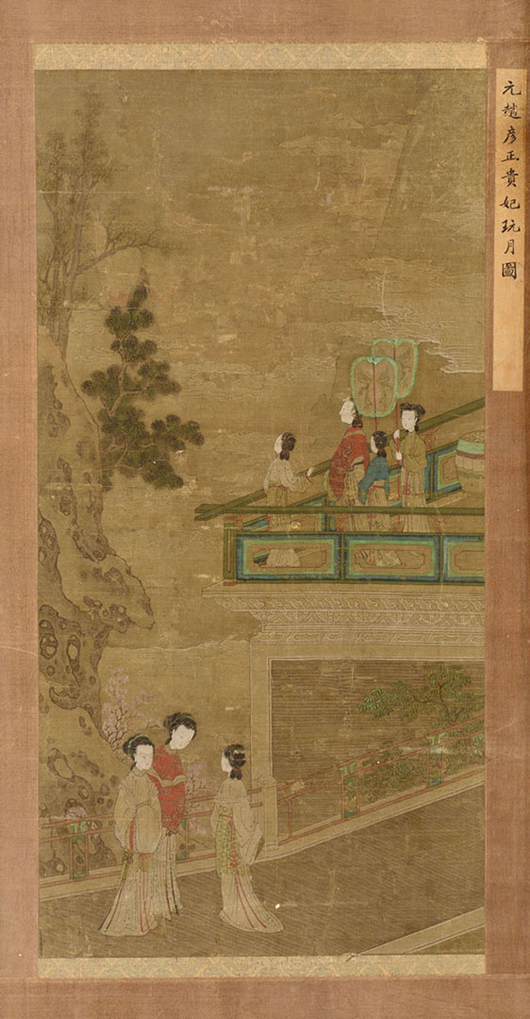 More bidders participated from China than from any other countries except the U.S. and Canada, and many of them wanted this early watercolor on silk scroll, which sold for $13,455. Case Antiques image.