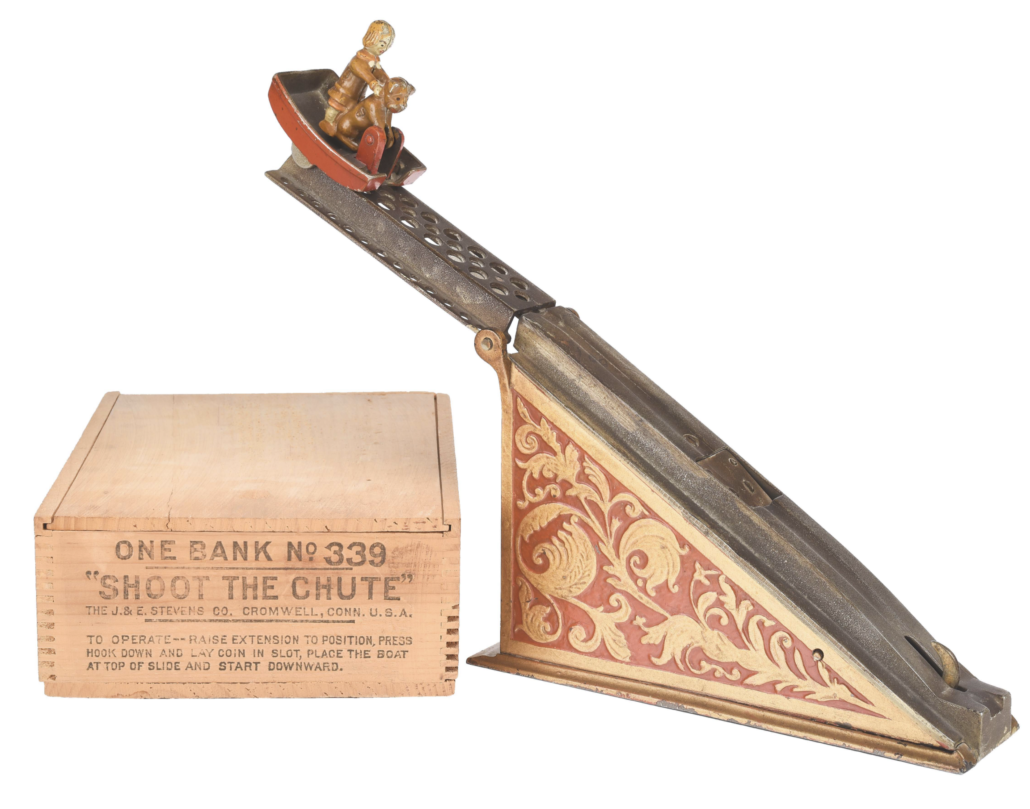 J. & E. Stevens Shoot the Chute bank. Features Buster Brown and his dog Tige in a boat, poised to ride down a chute and knock a coin into the bank. Near-mint-plus with original printed wood box. Provenance: Don Markey. Depicted in Dan Morphy reference book. The top lot of the sale, it sold for $156,000 against an estimate of $80,000-$120,000.

The top seller, a J & E Stevens “Shoot the Chute” bank featuring beloved early comic strip characters Buster Brown and his dog Tige, swept past its $80,000-$120,000 estimate to land at $156,000. “That bank offered everything a mechanical bank collector could possibly want,” said Dan Morphy, president of Morphy Auctions and a bank authority in his own right. “It’s in near-mint-plus condition, has its very rare original wood factory box, and came with provenance from the late Donal Markey, who was one of the most condition-focused collectors the hobby has ever known.” The bank is also the very example depicted in Morphy’s landmark 2007 reference book The Official Price Guide to Mechanical Banks. 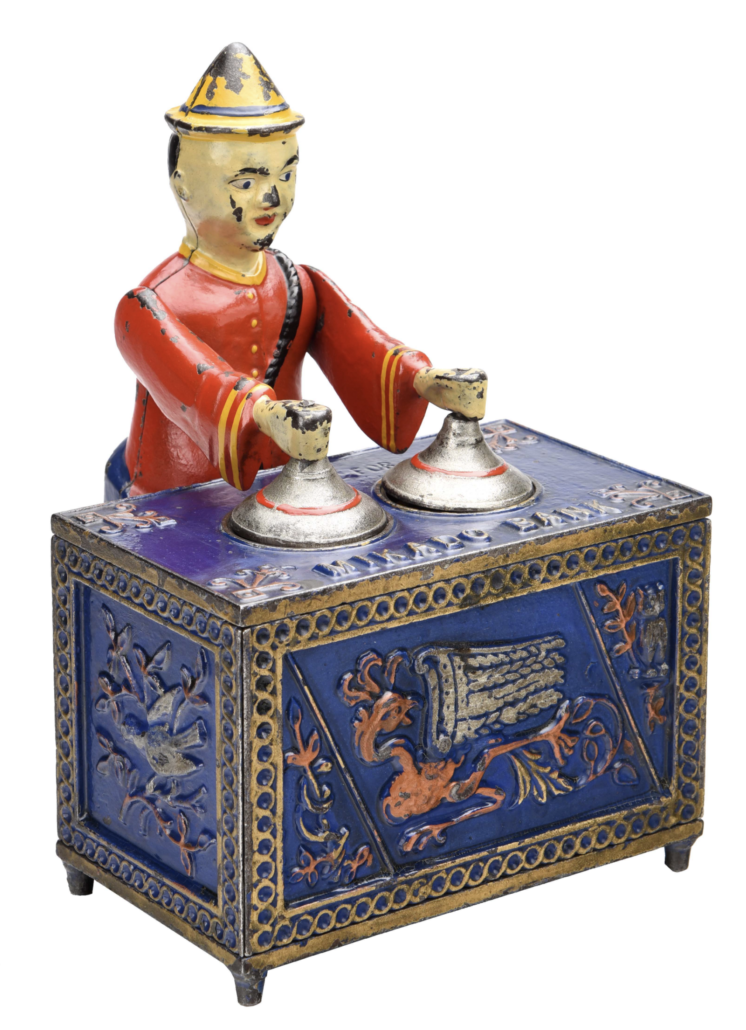 Kyser & Rex Mikado bank, desirable blue-base variation. Illusionist makes coin appear under one hat then disappear, only to reappear under a second hat. Near-mint. Sold within estimate for $81,000

A classic mechanical bank, Kyser & Rex’s “Mikado” has the type of complex action bank enthusiasts find irresistible. An illusionist stands behind an ornately decorated table and makes a coin appear then disappear under a hat, only to reappear under a second hat, like a shell game. The Bradys’ rare blue-base version in near-mint condition attracted 13 bids before settling within estimate at $81,000. 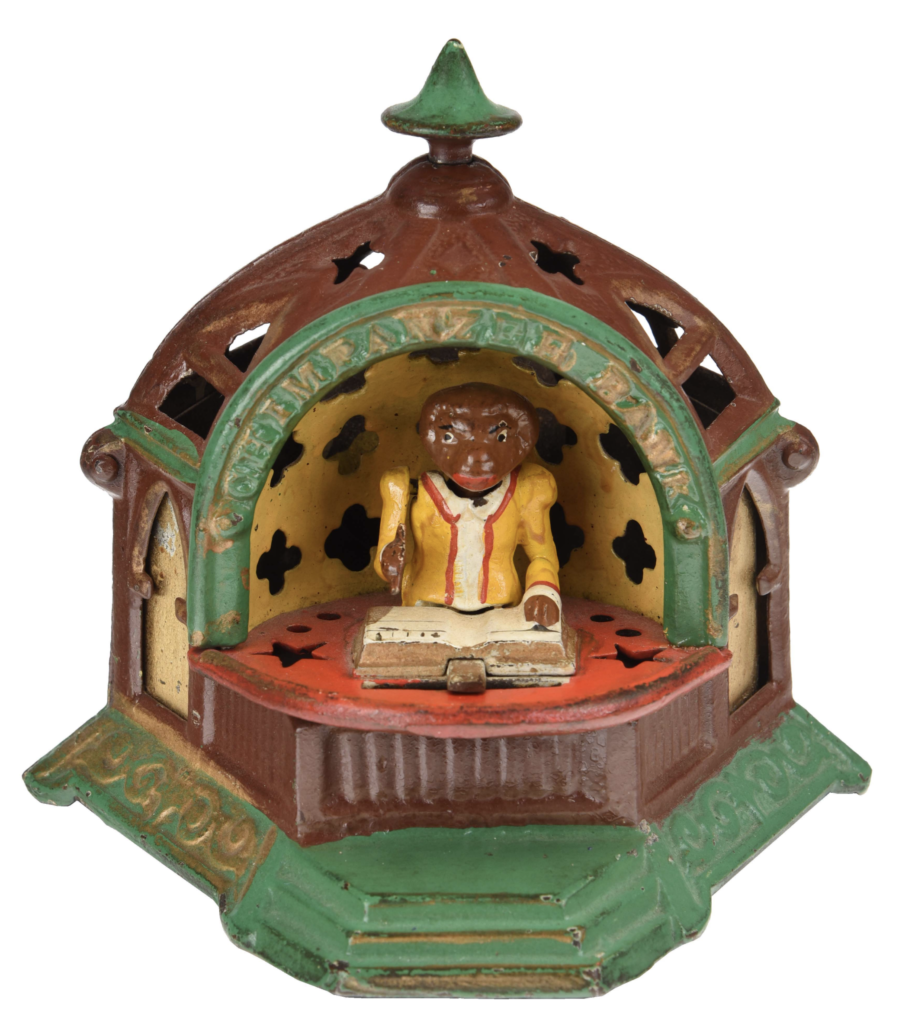 Kyser & Rex Chimpanzee bank. When slider is moved toward monkey figure’s logbook, coin slot opens, monkey lowers arm and head as though logging the deposit into the book, bell dings to signify receipt of deposit. Near-mint-plus. Dan Morphy reference book example and one of the top examples known. Provenance: Stephen & Marilyn Steckbeck. Sold above estimate for $63,000

Another outstanding Kyser & Rex production, a “Chimpanzee” bank depicts a stern-faced chimp “banker” seated before an open ledger. When a coin is deposited, the figure lowers his arm and head as though entering the deposit into the book, while a bell rings to acknowledge receipt. Formerly in the Stephen and Marilyn Steckbeck collection and one of the finest examples known, it sold above estimate for $63,000. 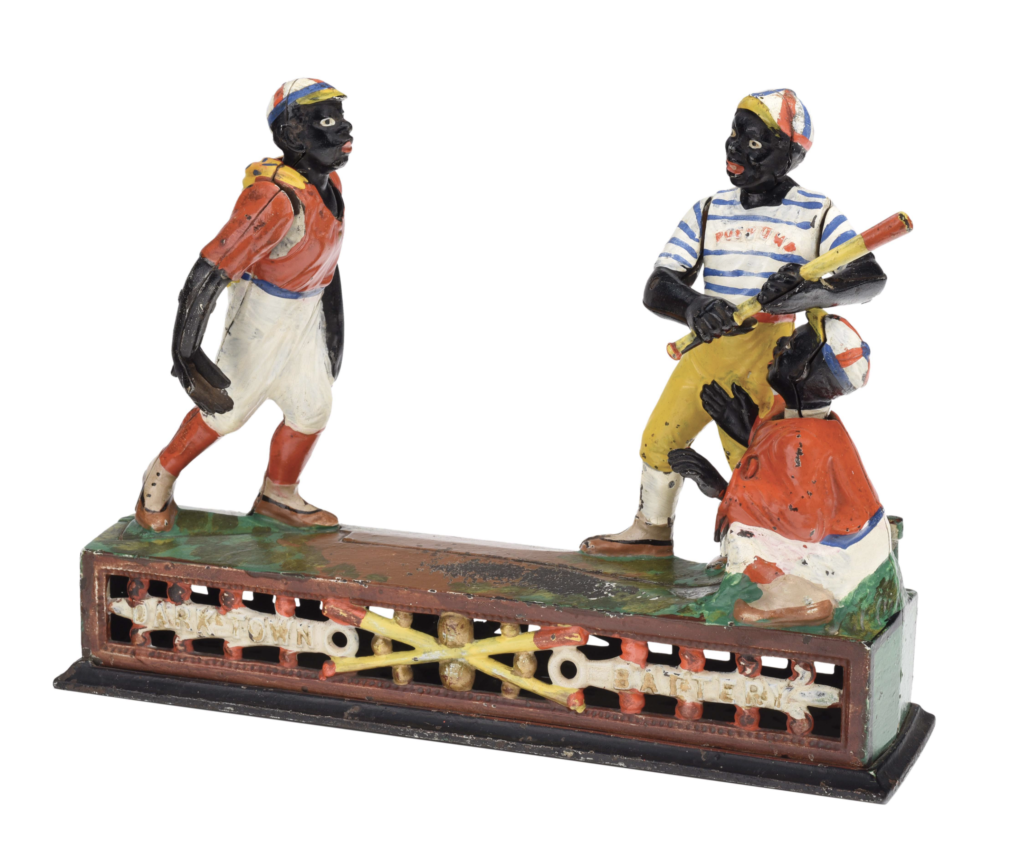 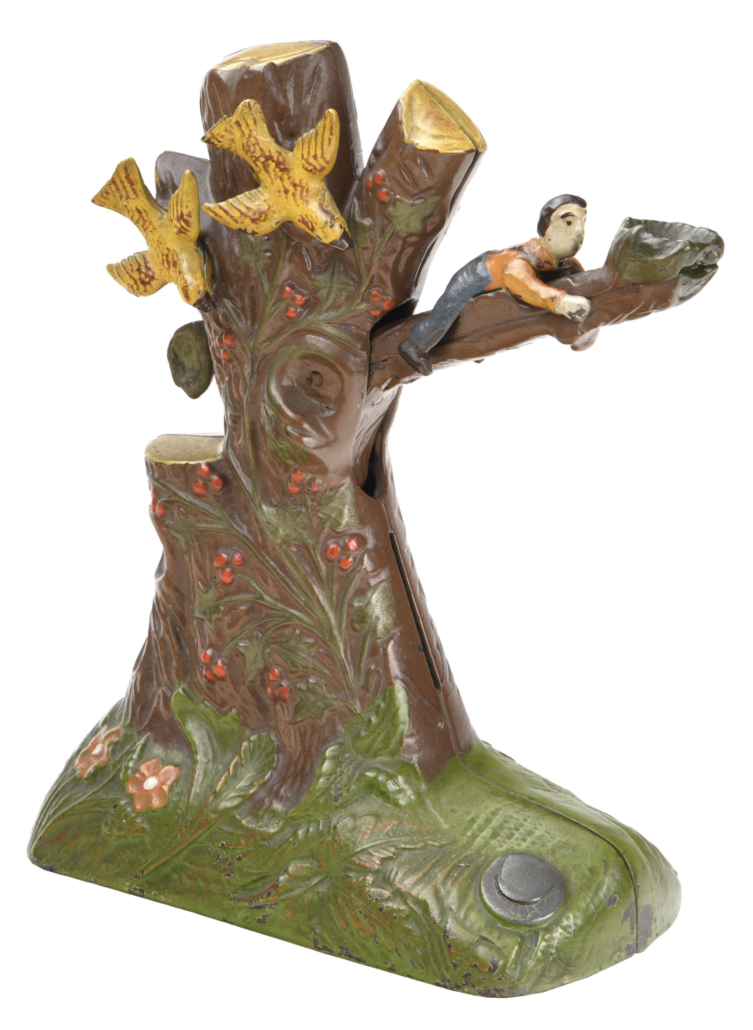 J. & E. Stevens Boy Robbing Bird’s Nest bank. As boy falls, coin is deposited into tree. Near-mint-plus and one of the best of all known examples. Provenance: Bill Norman. Sold within estimate for $33,600

They were joined by one of Bob Brady’s personal favorites, a “Mason” bank manufactured by Shepard Hardware Co., of Buffalo, New York. In near-mint-plus condition with its original printed wood box and provenance from the Donal Markey collection, it sold within estimate for $32,400. 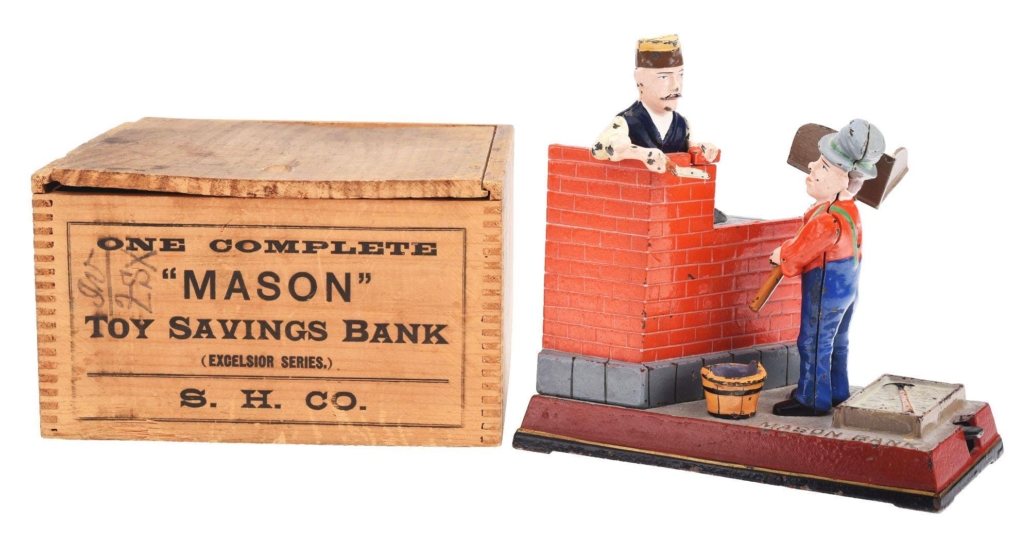 Saalheimer & Strauss (Germany) tin banks made in the 1920s/’30s for English-language markets finished in surprisingly rich territory, perhaps signaling a new trend to watch. An example of the company’s amusing Mickey Mouse Type 4 “Smile Please!” bank, which depicts the famous cartoon rodent playing a concertina on its front and assuming the role of a photographer on its reverse, rose to $31,200 against an estimate of $15,000-$20,000. 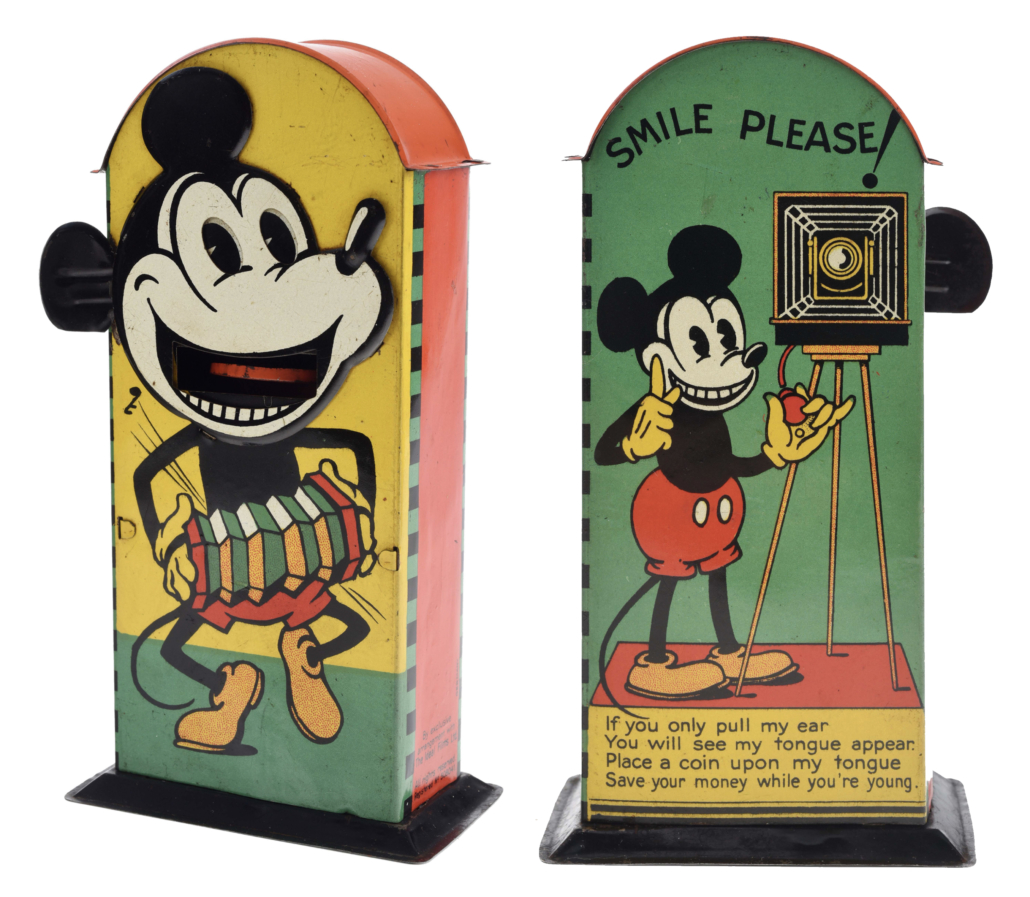 Front and back views of Saalheimer & Strauss (Germany) Mickey Mouse Type 4 tin mechanical bank made for English-language markets. Tongue comes out to accept coin when lever is depressed. Near-mint condition. Sold for $31,200 against a $6,000-$10,000 estimate

The manufacturer’s unmistakable artistry could also be seen on the Bradys’ colorful tin Tiger bank, which operates similarly to the Mickey bank, with a lever-activated tongue jutting out to accept a coin. Estimated at $6,000-$10,000, the “whiskered” feline with a piercing gaze leaped to a winning bid of $18,600. 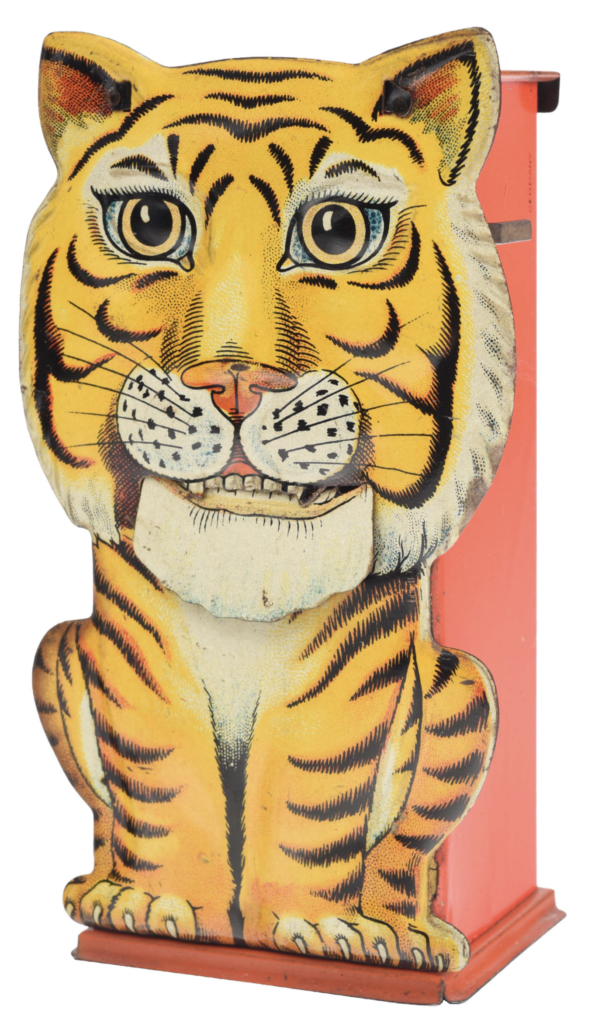 Saalheimer & Strauss (Germany) tin Tiger mechanical bank made for English-language markets. Tongue comes out to accept coin when lever is depressed. Near-mint condition. Sold for $18,600 against a $6,000-$10,000 estimate

A private preview event was held on the Friday evening before the February 27 auction, allowing Bob and Judy Brady and approximately 15 invited bank collectors to admire and inspect the bank collection one last time before its sale. Auction participation was enthusiastic, with bids coming in over the phones, online through LiveAuctioneers and in person at the gallery, with adherence to COVID guidelines. 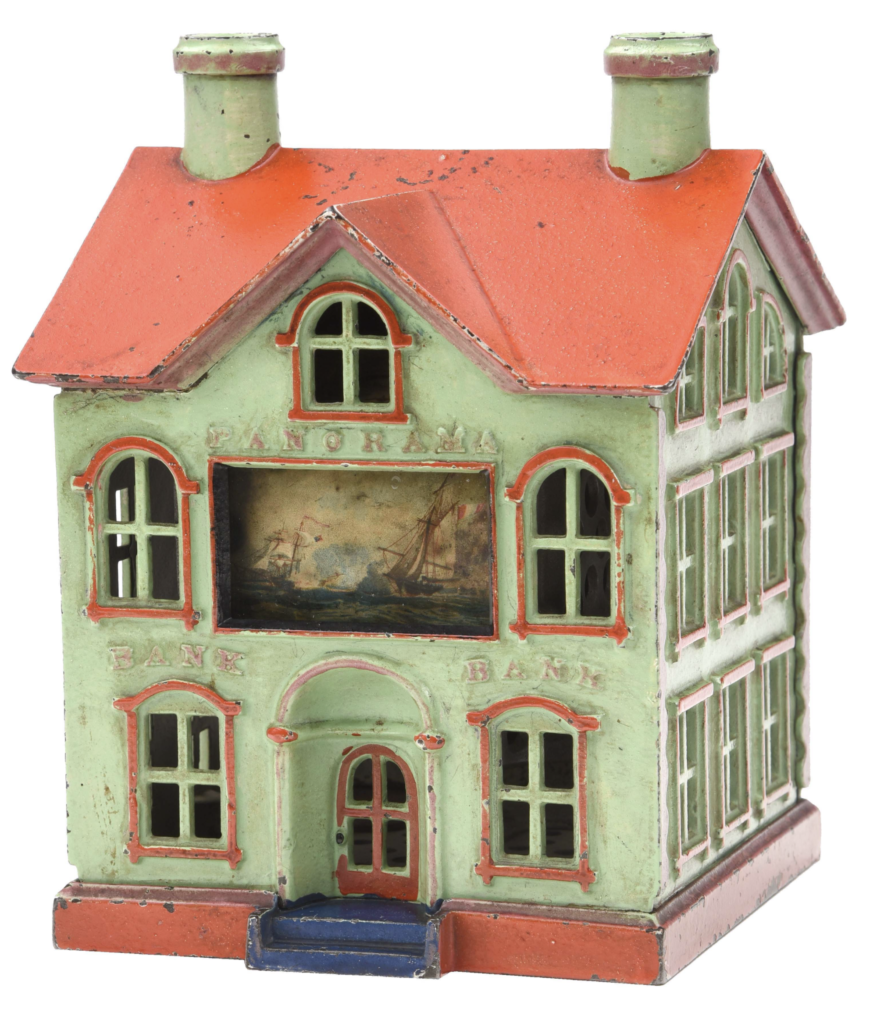 J. & E. Stevens Panorama bank. Each time a coin is inserted, the panoramic picture in the window changes to a new view. Near-mint-plus. Morphy reference book example. Sold within estimate for $27,600

“Each bank opened at half its low estimate, with no reserve. Some might have viewed this as a courageous move, but the banks were of very high quality and in superior condition from many years of careful upgrading. The Brady name carries great weight amongst bank collectors, and bidders responded exactly as we had hoped they would,” Dan Morphy said.