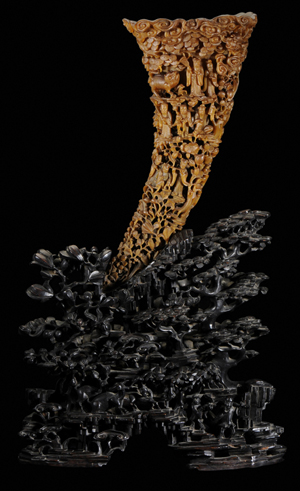 Symbols of longevity decorate the black wooden base of this 19th century reticulated rhinoceros horn libation cup. At $264,000, it was the top lot of the sale. Image courtesy of Brunk Auctions.

ASHEVILLE, N.C. –  In July, five rhinoceros-horn libation cups set a record for the television show, Antiques Roadshow at $1 million to $1.5 million. Reporting on the news, Roadshow writer Jane Viator said, “Between 2000 and 2008, the price of top-quality rhinoceros-horns at auctions increased by 300-400 percent and there’s little sign that the market is cooling off.”

Carvings on the 18 3/4-inch horn were far more intricate and detailed than any of the Roadshow cups. “The ornate carving is in keeping with 19th century examples,” said Senior Specialist Andrew Brunk. “The 17th century examples, as on the Roadshow, are a different kind of rhino horn and more austere.” The cup in the September sale included The Eight Immortals on rocky ledges, trees, clouds, a dragon, a tiger and goats. The horn and its black openwork stand descended in the family of Ezekell Hubbell (1768-1834), a noted China trade merchant and ship owner. For many years the Hubbell family of Connecticut, was involved with trade in the West Indies and China.

Although horn libation cups date from the 14th century, most of the estimated 4,000 that survive today were crafted during the second half of the 19th century. The cups were popular among the Chinese and other groups who believed that if poison were added to a liquid, it would either bubble or be rendered harmless by the special properties of the horn.

An important 17th century British pamphlet and map also exceeded presale expectations. The earliest English expedition in the Cape Fear region of North Carolina was led by William Hilton in 1662. On his second voyage, Hilton produced a promotional pamphlet with the first printed map solely of the Carolinas. The pamphlet, printed in London and dated 1666, descended in the Murchison and Sprunt families of historic Orton Plantation in Wilmington, N.C. It is the first publication to name Cape Feare (later Fear). The 10-page Hilton pamphlet opened at $18,000 and sold to a phone bidder for $114,000 (est. $20,000/$30,000).

Also from Historic Orton Plantation was a figured walnut bottle-case with hinged top and open interior. Like the Hilton pamphlet, it descended in the Murchison and Sprunt families. One rail on the frame supporting the case is inscribed “Orton.” The circa 1800 Coastal North Carolina case on frame brought $36,000 (est. $8,000/$12,000).

Nothing in the sale exceeded expectations with more enthusiasm than a 15th century illuminated manuscript. The German document contained 89 parchment leaves filled with text, decorated letters and the face of Christ and other biblical scenes. It came from the same era as the Gutenberg Bible. Estimated at $1,000 to $2,000, bidding ricocheted from phones and absentees to on-site bidders. At one time, eight phones were active. A pleased and determined phone bidder captured the manuscript for $21,600.

Two carved wooden figures of firefighters, circa 1820, climbed the selling price ladder to the third rung from the top. The pair descended in the family of Ely Heazelden, a colorful man who combined firefighting with street fighting. In 1842 as the boss warrior of Engine Company 27 in lower Manhattan, Heazelden led his men in a brawl with their bitter rival, Engine Company 34. The battle is reminiscent of scenes from Martin Scorsese’s 2002 film Gangs of New York. Haezelden obtained the 23-inch firefighter figures that had been designed for display on Engine 27 during parades and balls. Each figure is leaning on a gilt fire horn and dressed in period attire. The pair sold for $90,000 (est. $60,000/$90,000).

For more information about Brunk Auctions, call 828-254-6846. Visit www.brunkauctions.com for results of past auctions and information on upcoming sales. 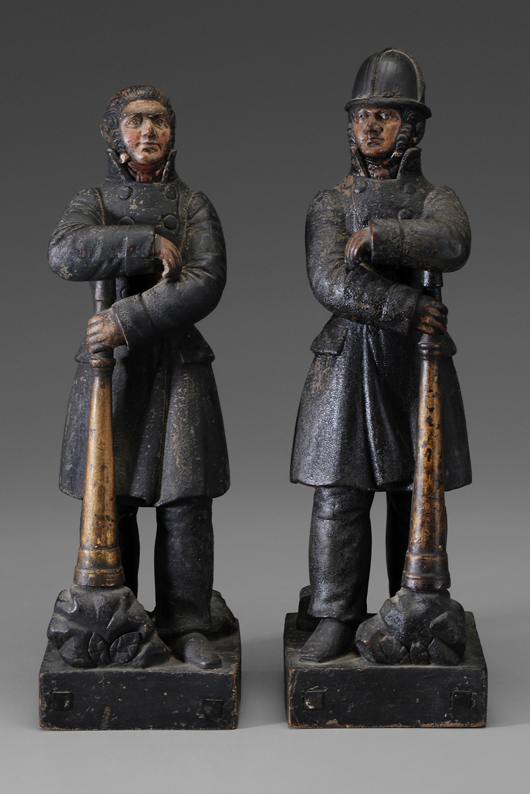 Four pages in the catalog were devoted to the history and description of these 23-inch-tall wooden firefighters. Possibly designed to decorate the engine of Company 27 in lower Manhattan, the pair descended in the family of firefighter Ely Heazelden and sold for $90,000. Image courtesy of Brunk Auctions. 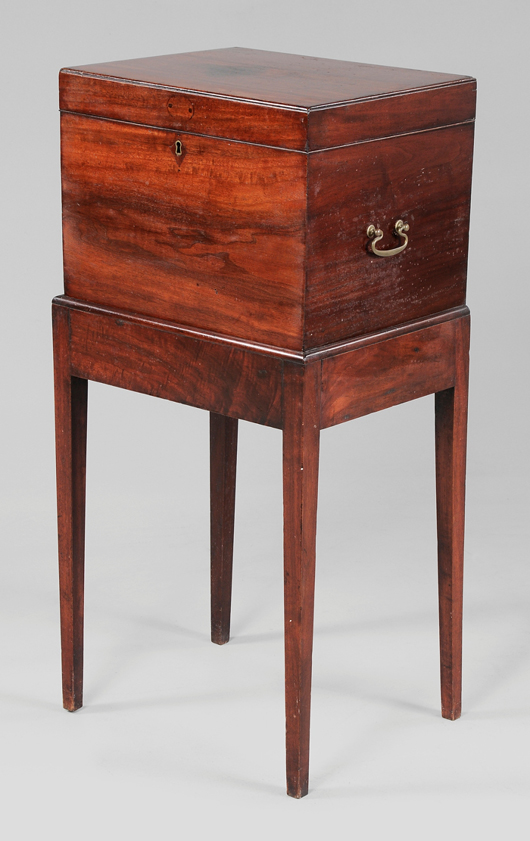 This early 19th century cellaret, 38 1/4 x 18 x 15 inches,” came from the Historic Orton Plantation in Wilmington, N.C. In figured walnut on its original tapered-leg stand, it sold for $36,000. Image courtesy of Brunk Auctions. 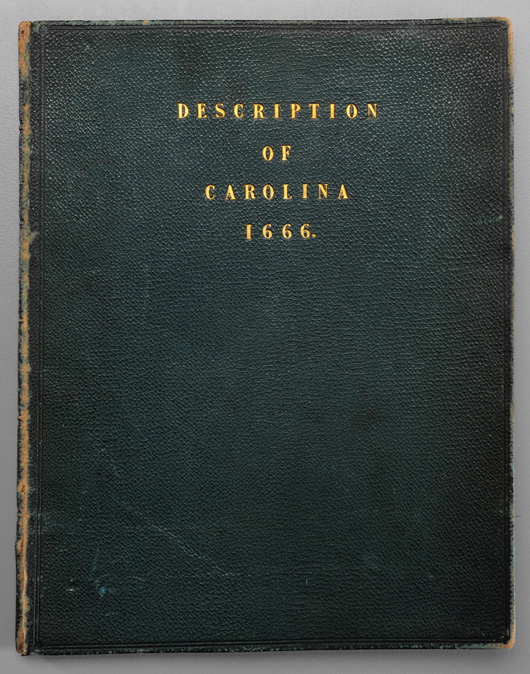 This important and rare pamphlet from 1666 includes the first written map of the Carolinas and is the first document to mention Cape Feare (later Fear). From the Orton Plantation collection, it was the sale’s second highest lot at $114,000. Image courtesy of Brunk Auctions.

Eighty-nine pages from this 15th century German illuminated manuscript were sewn together to form a codex. Black ink was used for the text with red and blue ink for titles and headings. It sold for $21,600 on a $1,000/$2,000 estimate. Image courtesy of Brunk Auctions. 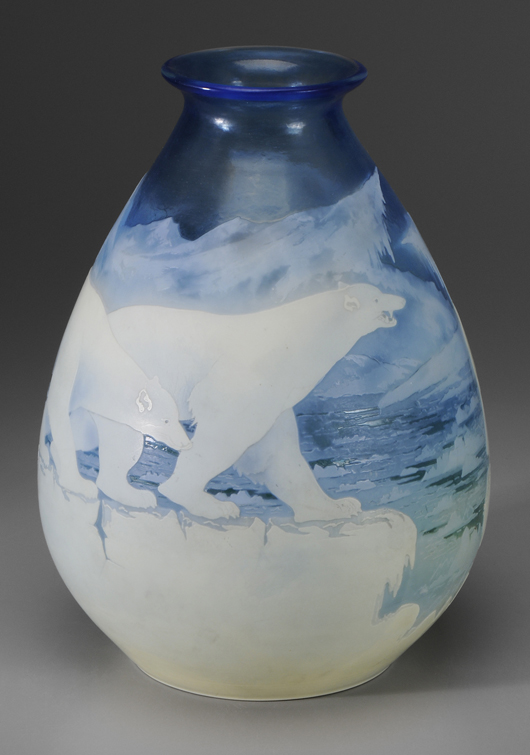 The mark for ‘Gallé’ is on the side of this blue and white 14 1/4-inch polar bear vase. The important vase sold for $45,600. Image courtesy of Brunk Auctions. 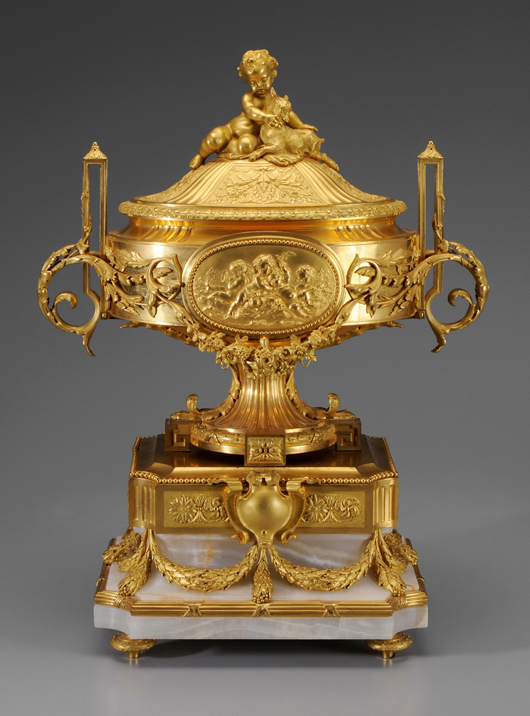 Trophies of music and cupids frolicking in waves decorate the sides of this French gilt bronze urn in the style of Louis XVI. The 29 1/2-inch-tall urn opened at $20,000 and sold for $30,000. Image courtesy of Brunk Auctions.

A soldier with spear forms part of the handle on this Continental gilt silver stein, which measures 30 x 14 x 12 1/2 inches. Enamel panels were applied to the base and sides. No maker’s marks or monograms were found on the $40,800 stein. Image courtesy of Brunk Auctions.