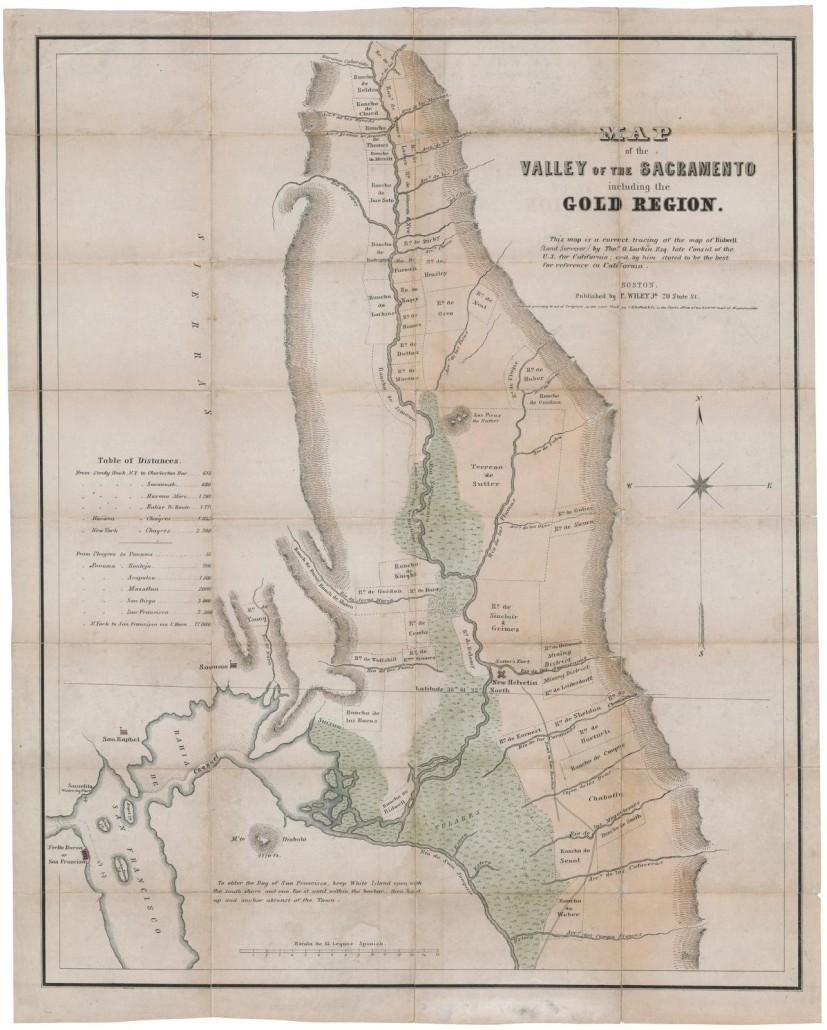 SAN FRANCISCO – The second in the series of PBA Galleries’ auctions of Rare Cartography, Exploration & Voyages: The Warren Heckrotte Collection on Dec. 3, featured books and maps on the California Gold Rush and on the surveying and mapping of the West. Topping the list was a rare 1848 Map of the Valley of the Sacramento including the Gold Region (above), which sold for $39,000.

The 235-lot auction included numerous rare pocket maps of the gold regions of California, the city of San Francisco, the Southwest into Mexico, the Rocky Mountain region and beyond.

Warren Heckrotte began collecting in the 1960s, and his superb and extensive collection of maps, books and atlases contains many scarce items that have not been on the market in several decades, some of which only a handful of copies are known to exist. The results brought record prices for many of the lots, with the bidders attending the auction, small in number but large in enthusiasm, joined by scores of participants by telephone and real-time bidding over the Internet, as well as by those who left earlier proxy bids.

The rare Map of the Valley of the Sacramento including the Gold Region states: “This map is a correct tracing of the map of Bidwell (Land Surveyor) by Thos. O. Larkin Esq: late Consul of the U.S. for California … .” It was published in Boston in 1848. Thomas Oliver Larkin, an American businessman and entrepreneur who came to California in 1832, used an 1844 manuscript map by California pioneer John Bidwell, at the time the best-known map of the Sacramento Valley, adding features peculiar to the recent gold discoveries, though not necessarily accurate. He then sent the map back East, where it appeared before year’s end. Despite its flaws, the folding pocket map is both rare and important, being one of the earliest examples of a publisher taking advantage of the gold fever that was just beginning to sweep the nation. The map was bid to $39,000, topping the estimate of $25,000-$35,000.

Another landmark California map was the William Eddy map, Approved & Declared to be The Official Map of the State of California by an Act of the Legislature Passed March 25th 1853. Compiled by W.M. Eddy, State Surveyor General … , printed by J.H. Colton in New York, then shipped west. A large, and brilliantly colored, folding map, this present example had been expertly flattened and backed with tissue. Though cartographically flawed, it is important as the first official map of California, fixing the borders that are, for the most part, known today. Of further note, the map was inscribed and signed by Eddy on the inside of the folding, an almost unheard of feature, since he died in March 1854, by which time only a few copies of the map had reached California. The map (below) reached the high end of the predicted price at $30,000. 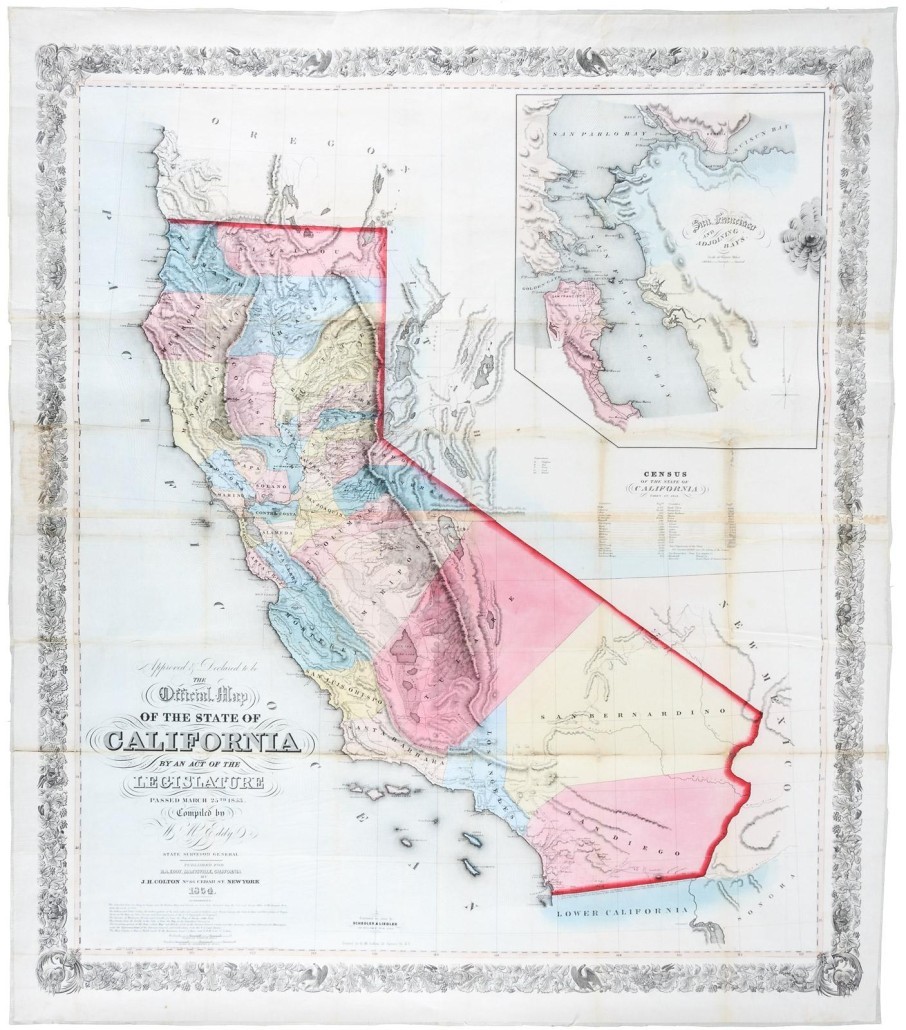 There was also keen interest in maps beyond the borders California. Among these was Henry DeGroot’s large hand-colored Map of Nevada Territory exhibiting a portion of southern Oregon and eastern California, 1863, the first printed map devoted to Nevada, with details of the silver mining regions. Only a handful of copies of the folding pocket map are extant, and this seems to be the lone example to contain the accompanying text, Guide to Degroot’s Map of Nevada Territory, Etc., Etc. The map (below) greatly exceeded the $8,000-$12,000 estimate when it sold for a record $27,000. 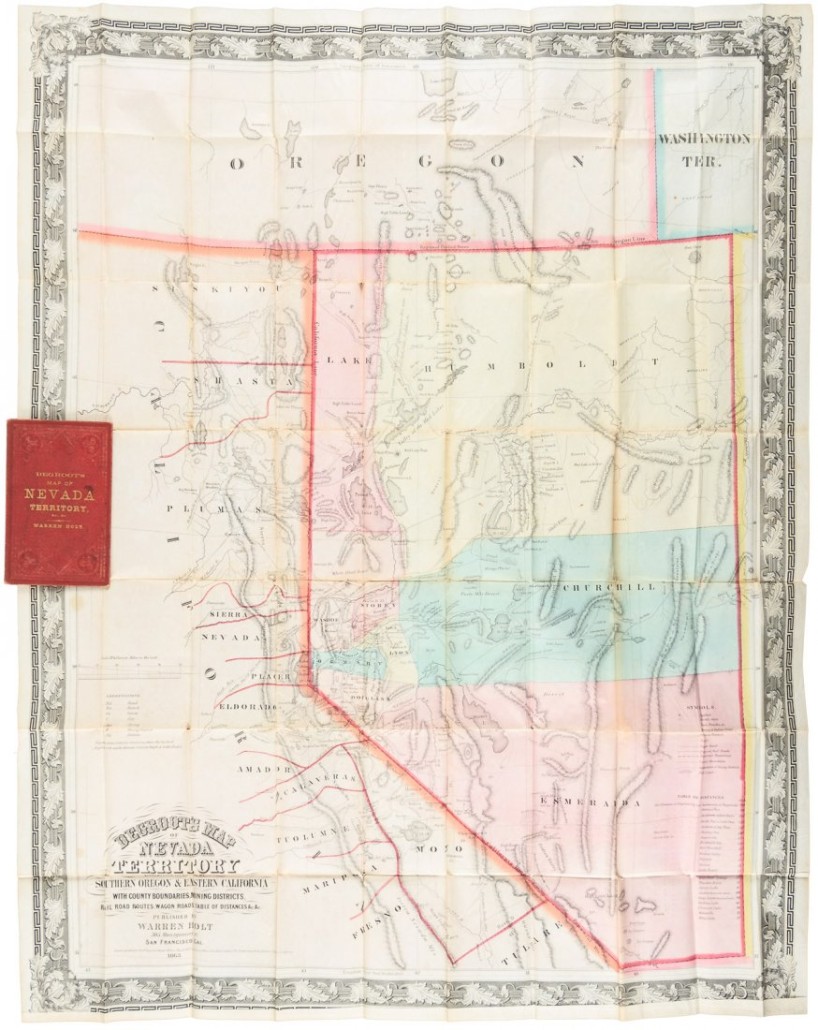 There were books in the auction as well, nearly all of which contained important maps, in keeping with Heckrotte’s collecting interest. The most valuable of these was a set of Eugéne Duflot de Mofras’ Exploration de Territoire De L’Orégon, des Californies et de la Mer Vermeille, 1844, two text volumes in the original boards, inscribed by the author, plus the atlas volume in the rare original fascicles (wrapper-bound parts), which included a large and important map of the Pacific slope. The rare combination of the inscribed text in original boards and the atlas in original parts made this a desirable copy indeed, borne out by the selling price of $30,000. 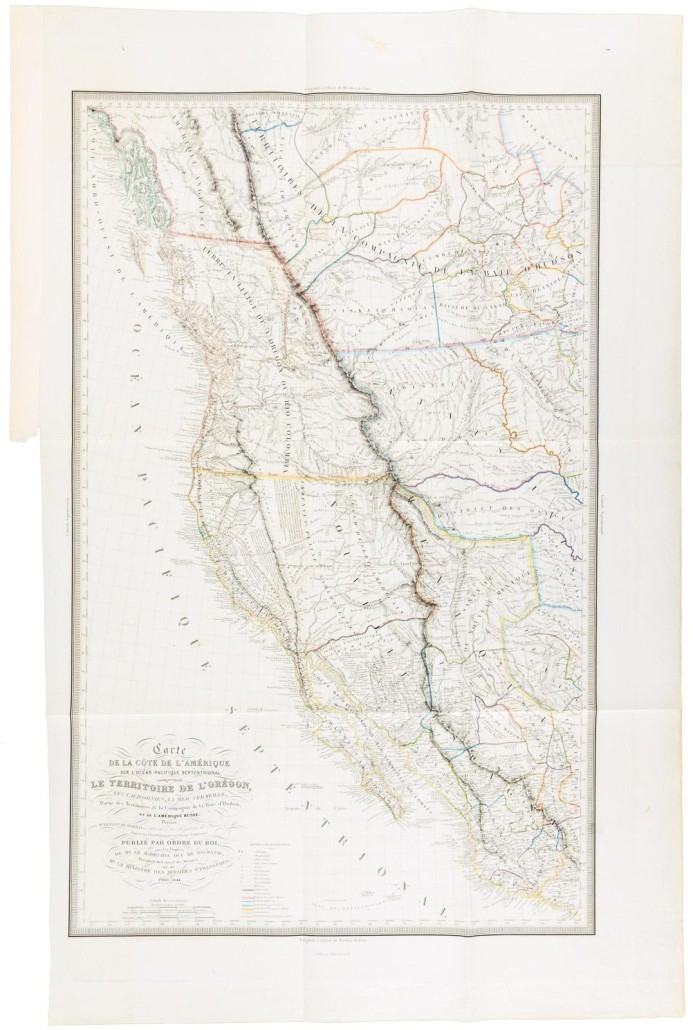 Other significant lots in the auction included: 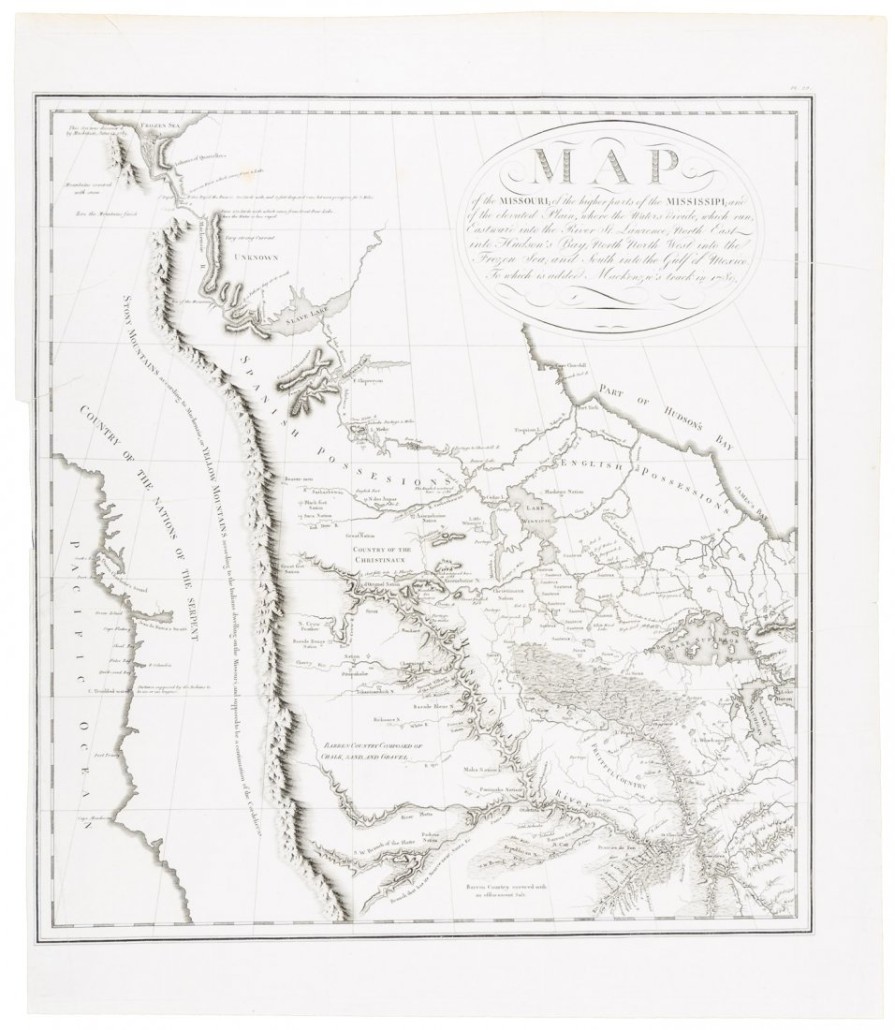 George Collot’s ‘Map of the Missouri; of the higher parts of the Mississippi; and of the elevated Plain, where the Waters divide … ,’ 1826. Price realized: $24,000. PBA Galleries image

Note that all prices listed include the buyer’s premium.