MONROVIA, Calif. – Moran’s Feb. 21 Decorative Art Auction featured 413 total auction lots, offered in two contiguous sessions. Buyers came out in droves for Moran’s first Decorative Art Auction Moran’s in 2017. the The first session kicked off with a standing-room-only crowd; throughout the entirety of the auction. Moran’s achieved an 87 percent sell-through rate, with many pieces picked up by buyers casting their bids online. Absentee and Internet live bidding was available through LiveAuctioneers.

The auction started out strong, with silver and European works of art doing particularly well throughout the evening.

Moran’s second session, featuring property with estimates at $2,000 and below, was a sort of test run for Moran’s newly announced Studio Decorative Art Auction model. Taking after Moran’s Studio Fine Art Auctions, which were successfully launched last year, these catalogued and photographed sessions will feature an array of approachably priced property across a number of collector categories.

With the introduction of the Studio Auction model, Moran’s is phasing out their uncatalogued Discovery Auction sessions. Moran’s will offer three Studio sessions in May of this year, including Jewelry, Fine Art and Decorative Art.

Two of the evening’s highest hammer prices were for works of art by British painter Alan Lowndes (1921-1978). Executed in Lowndes’s typical bright, colorful and painterly style, each example realized $10,200 (including Moran’s 20 percent buyer’s premium). The D’Jango Club, Manchester, depicts a jazz trio mid-session, while the more subdued An Actor (Charles Laughton) depicts its subject with his head bent, slowly moving through the backstage area of a theater (above). Multiple phone bidders were registered to bid on each lot; the same telephone bidder cast the winning bid on both pieces.

An Italian antiphonal choir book illuminated page fragment dating to 1476 proved an intriguing highlight to collectors of illuminated manuscripts (below). Considered rare because of its excellent condition and its self-referential depiction of a choir mid-song, the page was estimated to bring between $15,000 and $20,000. The final selling price was a respectable $18,000. 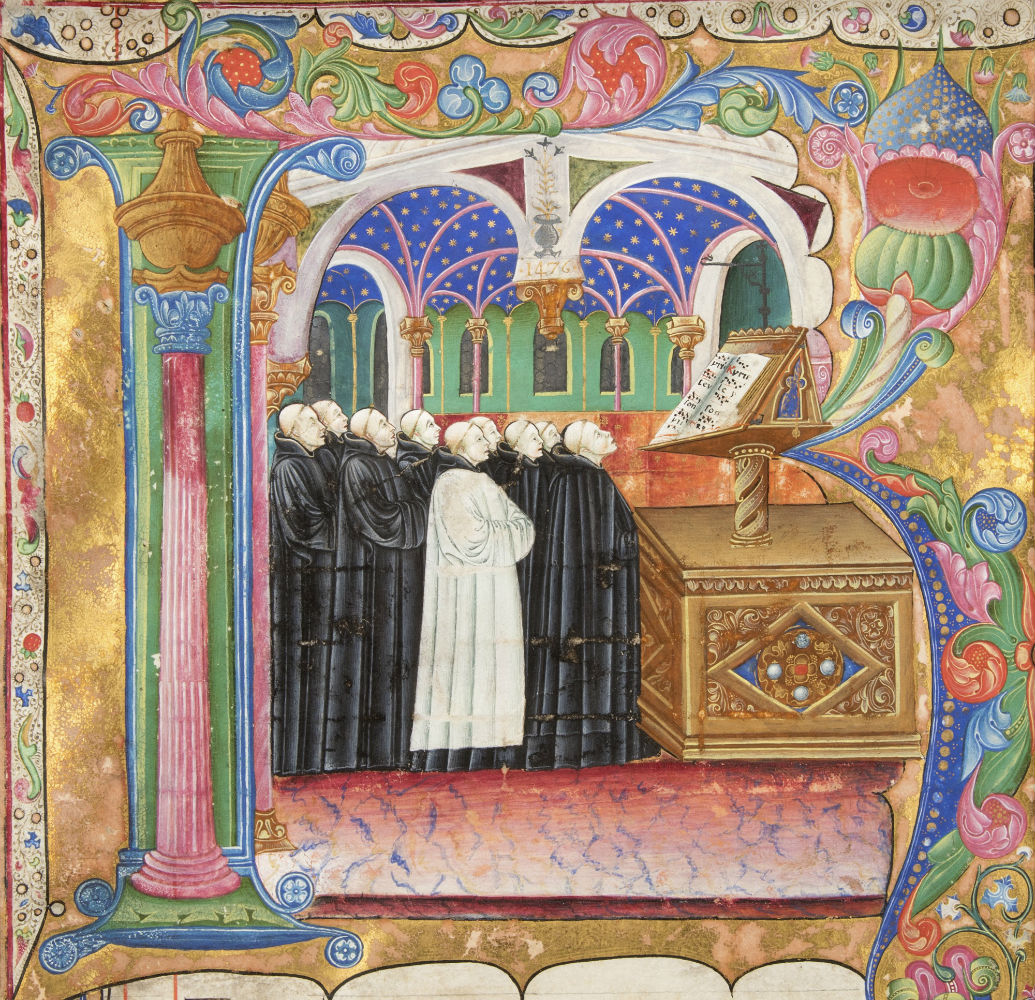 French painter Eugène Galien-Laloue (1854-1941 French) was represented in Moran’s February catalog by the charming Place de la République, a snow-dusted Parisian street scene; consigned from the Los Angeles Goldfield Collection, the work was expected to earn $4,000 to $6,000. Thanks to competition between two telephone bidders, the work brought $5,400.

Traditional sculptures in bronze and marble performed well throughout the evening, including a number of pieces representing classical subjects. An apparently unmarked patinated bronze sculpture of a standing Heracles with club and lion’s pelt under one arm (modeled after the fourth century B.C. marble by Greek sculptor Lysippos) was conservatively estimated to earn $1,000 to $2,000 (below). The sculpture of Heracles inspired half a dozen bidders to register for telephone lines and a few others to participate online; the winning bidder took the piece home for $4,500. 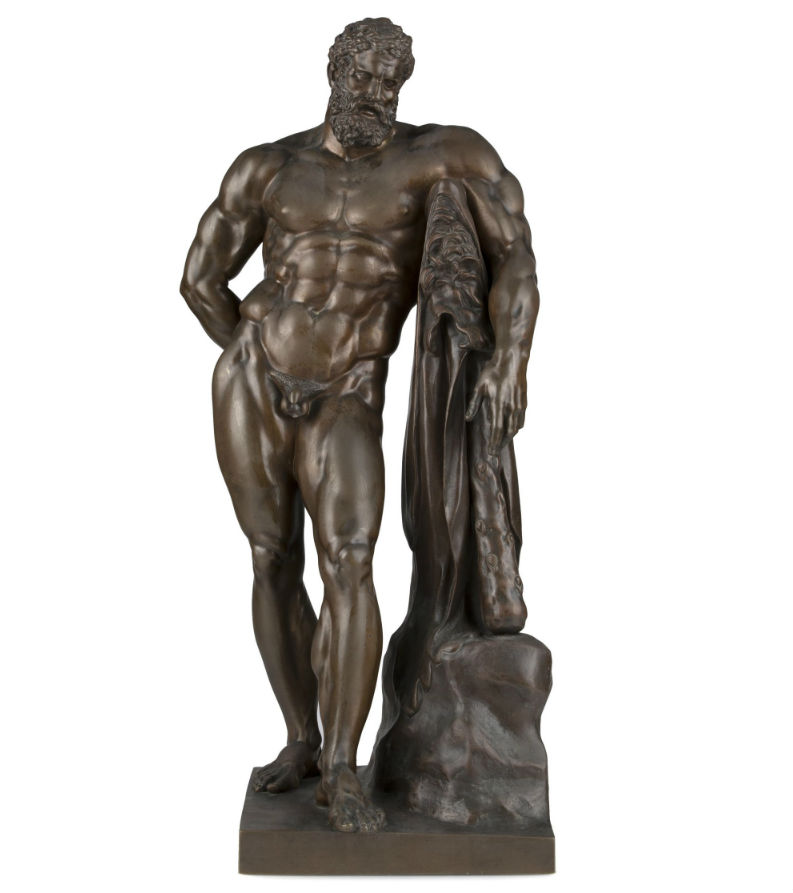 Laocoön and His Sons, after the artist Christophe Fratin (1801-1864 French) was offered for $1,000 to $2,000. The bronze sculpture, modeled after the Laocoön group, a monumental Hellenistic marble statue unearthed in 1506, sold to a determined online buyer for $4,200. A carved marble sculpture by Italian artist Antonio Frilli (1860-1920), modeled after the second century B.C. Winged Victory of Samothrace, was consigned from a private Long Beach, Calif., collection. The marble achieved $5,700, just over the estimated $2,000 to $4,000.

Select high-quality examples of French furniture found eager buyers, including a superb example of 19th century craftsmanship by French cabinetmaker François Linke (1855-1946) (below). The Louis XVI-style gilt bronze-mounted fern stand was brought to the block with a $4,000 to $6,000 estimate, and earned $9,600 after competition from floor bidders. 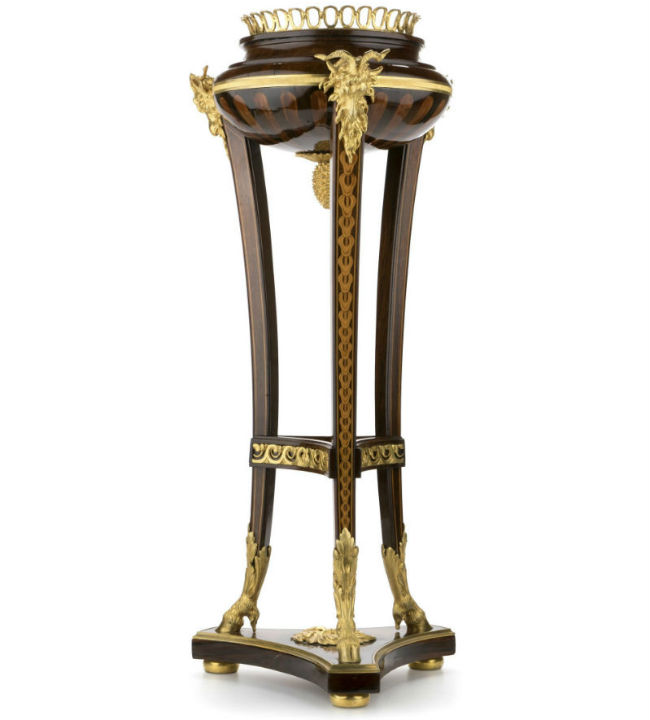 Silver tableware did quite well throughout both sessions, however select results from the first session were particularly impressive. A 19th century silver-plated duck press, marked for Parisian maker Cailar & Bayard and notable because of its handsome elephant-form base and excellent condition, was brought to the block with a conservative $1,000 to $2,000 estimate; the piece ultimately went to a private collector bidding via the LiveAuctioneers online platform for $5,100.

Hailing from the same Santa Paula collection as the duck press, a collection of 24 circa 1920s Gorham sterling silver dinner and bread plates in excellent condition brought an impressive $11,400 (est. $1,200-$1,800).

This set of Gorham sterling silver dinner and bread plates, consisting of 24 pieces, was one of the evening’s top lots, achieving a $11,400 selling price (estimate: $1,200-$1,800). John Moran Auctioneers image

Highlights from the second-session offerings include:

● A gilt-bronze sculpture of a swimming man by Richard Thuss (1865-1953 Austrian/American) exceeded expectations when multiple telephone and online bidders jumped into the fray; the work brought $3,000 (estimate: $200-$300).

● A group of Chinese snuff bottles in various styles and motifs were brought to the block late in the sale, achieving $1,320 thanks to a handful of competing bidders on the floor (estimate: $400-$600). 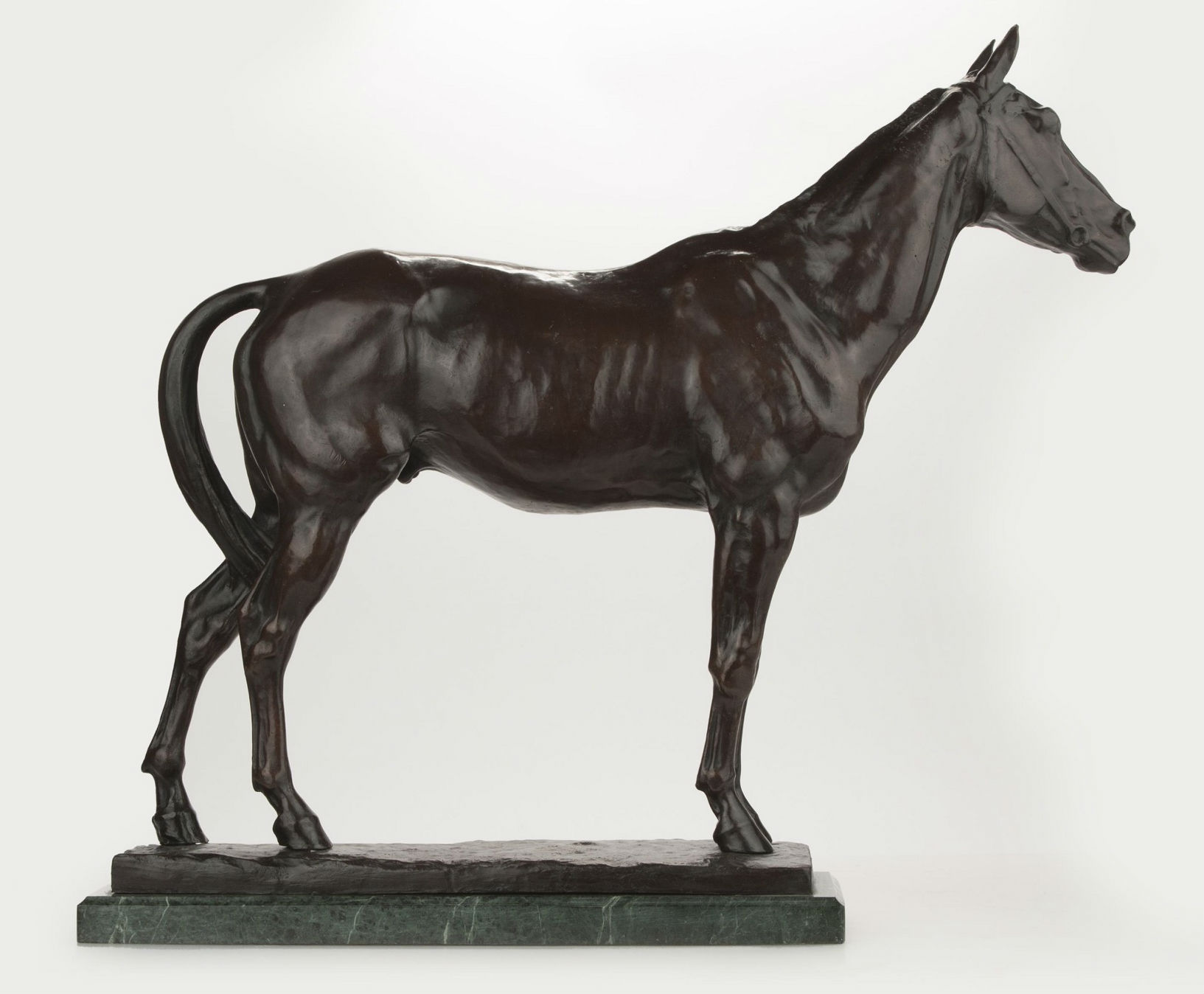 For more information contact John Moran at 626-793-1833 or email info@johnmoran.com.