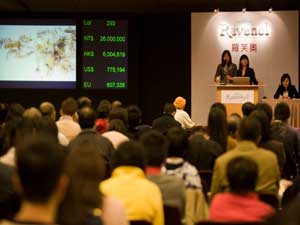 TAIPEI, Taiwan – More than 500 people packed the auditorium in the Fubon National Conference Center on Dec. 7 for Ravenel Art’s autumn auction, which had total sales in excess of $7.2 million.

Nearly 70 percent of the 147 lots sold, which the auctioneers considered a respectable figure considering economic challenges to the market.

The top selling lot was Cai Guo Qiang’s Descending Wolves for the Guggenheim International Gala, which realized $903,995 among intense bidding. All prices include buyer’s premium. Considered one of the best of Cai’s “explosion pictures,” this masterpiece was created on five paper panels. It depicts a pack of wolves descending a rocky mountain. Cai captured the full power, beauty and energy of the wolves through his use of explosives and created a magnificent picture where the tones and hues evoke the greatness of traditional Chinese ink and brush painting.

Zhang Xiaogang’s Bloodline Series – Big Family achieved $837,209. Painted in 1998, the painting is of particular note because of the intenseness of the expression in the eyes of the mother, father and son created by an artist at the height of his powers. Based on old black and white family photographs, the Bloodline Series depicts the soul and character of the Chinese people.

A superb work from Wang Huaiqing’s Ming Furniture Series, Separation and Reunion, fetched $703,637. Depicting a deconstructed Ming chair, the work is a profound study of a symbol at the heart of Chinese culture.

Composition No. 190, an abstract by Chu Teh-chun, attracted a lot of interest because of the rarity of its style. A beautiful work, created in dark colors and bursting with energy, it evokes a rocky landscape. The full power of Chu’s merging of traditional Chinese expression in ink and brush paintings and Western oil painting techniques is seen in the picture, which sold for $369,410.

Another Work by Chu, Souffle de la nature, fetched $182,946. A more traditional work by Chu, it was suffused with light and color.

Two statues by Li Chen, a Taiwanese sculptor renowned for his Buddhist works, attracted intense bidding. Landscape in Heaven a large Buddha holding a golden mountain in one hand and silver water in the other while standing on a cloud, brought $154,800. Another smaller sculpture, Cultivated by Mist and Cloud, also attracted spirited bidding and realized $42,218.

Huang Gang’s works have continued to exceed expectations in recent months, and Beijing My Home was no exception, fetching $84,436, more than double its high estimate. Renowned for creating collages from wooden sutras and various artifacts from Tibet, Huang created this magnificent work using materials from his hometown, Beijing. Centered round a large red star, symbol of China, Huang has placed traditional woodcuts used to print records of ancestors.

An oil painting by Shiy De-jinn, a Taiwanese master artist’s portrait of fellow painter Tian Mian-shi, brought in $73,882, close to its high estimate. A beautiful portrait executed in blues, black and touches of red with a white background, it demonstrates Shiy’s knowledge and understanding of the use of space, tone and hue in traditional Chinese painting.

Two records were set for young Chinese contemporary artists. Chen Liu’s Door Gods diptych, a magnificent depiction of temple door gods, brought in the artist’s record price at $38,000. The pictures are mesmerizing in detail and execution, painted in browns, golds and oranges. The door gods are displayed in splendid attire with their guard dogs.

A record was also set for Jia Gang’s It Takes Strength to Speak Out, $35,182, doubling its high estimate. In the vein of Political Pop, it depicts a group of young people grouped around microphones with only one person willing to stick his neck out.

Another painting by a young Chinese artist also attracted strong bidding. Wei Jia’s Say Goodbye V, an atmospheric portrayal of a young black-cloaked man sitting with his back to us on a branch of a huge tree, is reflective of the artist’s introverted nature.

Japanese art maintained its strong appeal with 10 of 11 lots finding buyers. Hiroyuki Matsuura’s Yellow fetched $45,736, which was within the estimate. A work by Yoshitomo Nara, Untitled, depicting a small child with angst in her eyes, attracted a lot of interest and sold for $42,218. 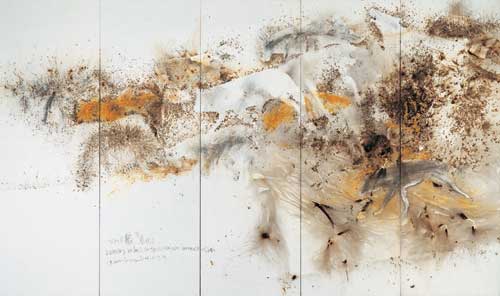 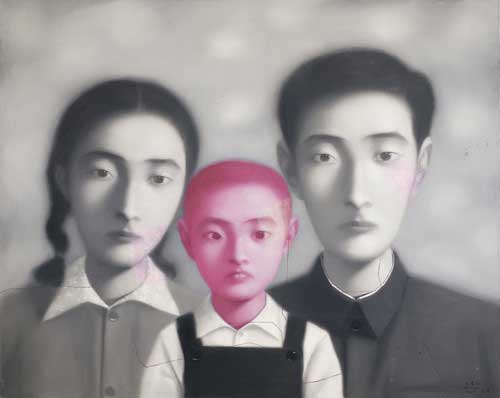