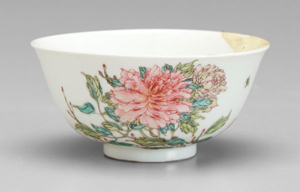 This little Chinese famile rose bowl soared over its humble pre-sale estimate ($150-$300) to become the top lot of the sale. It was purchased from The Chinese Shop in Washington, D.C. in the 1940s by Thomas Williams and sold September 13 for $115,000.

The vase in the May sale was Imperial porcelain from the Qianlong dynasty (1736-1795). Lot 738 in the September auction, a famille rose bowl with peonies and insects and a two inch repair to its rim, was smaller and earlier. It dated from the Yongzheng dynasty (1723-1735) and measured a scant 2 inches by 4 ¼ inches. In May and again in September, a low pre-sale estimate reduced in-house expectations.

The improbable little bowl was part of the Chinese porcelain collection of the late Thomas Benjamin Williams (1898-1974). Williams moved from Hendersonville, North Carolina, to Washington, D.C. in the 1930s. He purchased the bowl and other porcelain items in the 1940s from Washington’s The Chinese Shop. Other items from his collection came from Hammer Galleries, New York.

Earlier in the day, another Yongzheng period piece from Williams’ collection destroyed its pre-sale estimate. The finely textured 11 inch liver red bottle vase purchased in the 1940s had a respectable $4000 to $8000 estimate. Originally from the William Randolph Hearst collection, the vase sold for $105,800, the second-highest price achieved in the sale.

The two-day sale began early on September 12 with another unusual collection. Lots 1 through 34 were rare Oriental carpets deaccessioned from North Carolina’s famous Tryon Palace after 30 years in storage. They generated strong interest among antique rug collectors and within the textile trade.

Purchased in the 1950s and ‘60s from textile experts such as Vojtech Blau, French & Company and others of equal reputation, many of the carpets were installed in the reconstructed capitol building when it opened in 1959. They were removed from exhibition after it was learned that no carpets of any type were part of Tryon Palace’s 18th century décor.

Leading the way was a 21 ft. 7 inch by 11 ft. 6 inch Ottoman carpet, from late 16th to early 17th century Cairo, Egypt. Blending several carpet-weaving traditions, it was probably produced for the royal court. The Ottoman opened at its $25,000 reserve and sold to a bidder in the house for 74,750.

The second highest Tryon carpet and the cover lot for the catalog was a 30′ 10″ by 11′ 11″ Indo-Persian carpet dating from the Safavid period (16th to 17th centuries) in Persia. Tryon Palace purchased it in 1958 from French & Company, New York City. Records indicate that it was purchased originally for the Braganza Palace, Lisbon, Spain. The massive carpet and an 11 ft. 11 inch by 32 inch fragment sold for $57,500.

The Hickory Museum of Art, the second oldest art museum in North Carolina, deaccessioned 112 lots of British, German, Italian, Mexican, French and Spanish paintings and Asian art and ceramics. Two of the museum’s portraits exceeded $20,000: Mrs. Thomas Babington at $46,000 and James Hamilton, Marquess of Abercorn at $29,900. Both were unsigned, but strongly attributed to Sir Thomas Lawrence (British, 1769-1830). Verso on Mrs. Babington’s portrait was an inscription giving information of the portrait’s date, subject and artist. There was also a long auction history beginning at Christies in 1901.

Brunk Auctions Fine Art Specialist Laura Crockett did extensive research on the Hamilton portrait. She found a photograph of it in London’s National Portrait Gallery and it is mentioned in the complete catalog of Lawrence’s work. Crockett compared the crackle pattern of the Hickory Museum portrait with the London photo and they matched. “It was a neat find,” said Crockett.

A truck-load of Southern furniture deaccessioned by Museum of Early Southern Decorative Arts (MESDA), Winston-Salem attracted bidders in all venues – in-house, on the phone and Internet and absentee. The in-house favorite – judging from how often it was inspected during preview – was a circa 1770 Virginia Chippendale spice chest. Its figured walnut door opened to reveal 10 interior drawers, five of which extend the entire width of the chest (17 ¼”). The skirt and bracket feet were original. It sold for $12,650 (est. $4000 – $6000).

The top MESDA furniture lot was another unusual piece: a1780-1800 North Carolina Chippendale pewter cupboard in walnut with poplar the secondary wood. Constructed as a single unit with two dovetailed drawers and two panel doors on bracket feet, it brought $48,300 (est. $5000-$8000).

Outside of collections by Thomas Williams, Tryon Palace, Hickory Museum and MESDA, there were a number of exceptional individual consignments:

“It was hard to narrow this sale down to a few key lots,” said principal auctioneer Bob Brunk. Hammer price plus buyer’s premium for 990+ lots was $2,542,190.

Visit the catalog with prices realized for this sale at www.LiveAuctioneers.com.

This palace-size 17th century Indo-Persian with elegantly drawn compartments around the perimeter was one of 34 carpets deaccessioned by Tryon Palace, North Carolina. In a rich array of colors with silk-wrapped selvedge, it brought $57,500. 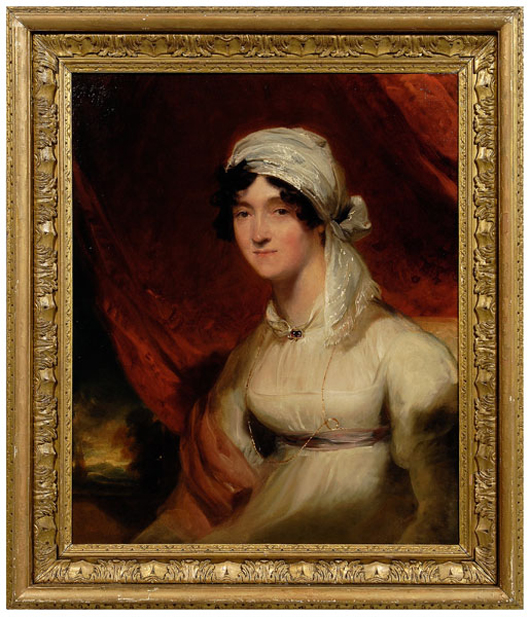 Accompanying this circa 1811 portrait of Jean Babington is an appraisal from Newhouse Galleries, dated December 22, 1982. Mrs. Babington is arrayed in a white empire gown with her hair wrapped in a scarf. At $46,000, her 30-1/8 inches by 25-3/8 inch Thomas Lawrence portrait was the highest priced painting in the two-day sale. 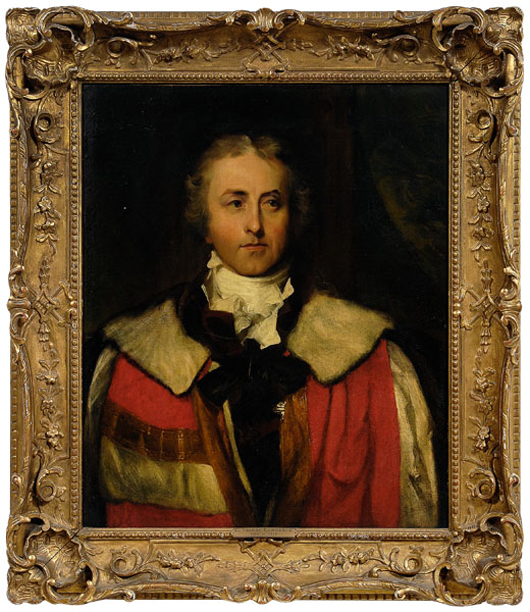 Unsigned, but attributed to Sir Thomas Lawrence (British, 1769-1830) is a half-portrait of James Hamilton, Marquess of Abercorn, in his earl’s robes. The frame is early 20th century carved and gilt wood. Consigned by the Hickory Museum of Art, the 30-1/8 inch by 25 inch oil on canvas sold for $29,900. 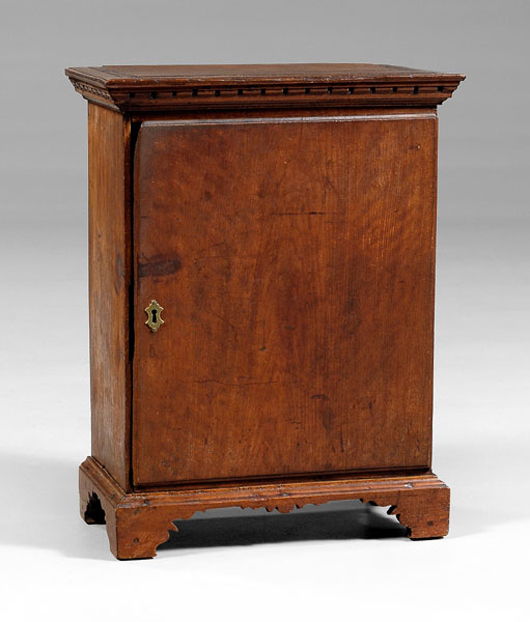 This circa 1770 Chippendale spice chest in walnut with poplar secondary was originally purchased in Petersburg, Virginia. The unusual 23 ¾” by 17 ¼” by 9 ½” chest deaccessioned by MESDA of Winston-Salem, North Carolina, brought $12,650. 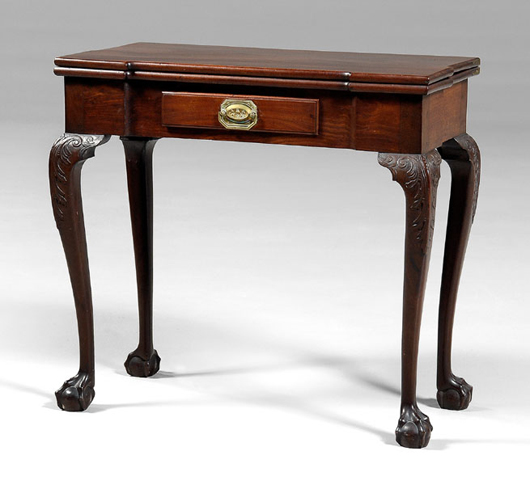 The grandson of Jonathon Harwood, Littleton, Massachusetts, consigned this 28 ½ inch by 32 inch by 15 inch Boston Chippendale game table. With fold-over mahogany top, cabriole legs with acanthus carved knees and ball and claw feet, it was the top furniture lot at $74,750.

This little Chinese famile rose bowl soared over its humble pre-sale estimate ($150-$300) to become the top lot of the sale. It was purchased from The Chinese Shop in Washington, D.C. in the 1940s by Thomas Williams and sold September 13 for $115,000.