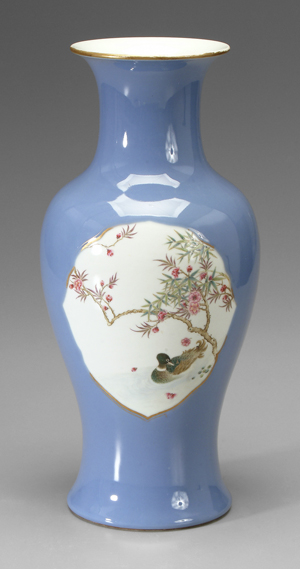 Polychrome birds and flowers decorate this 17¼ inch Chinese lavender/blue vase. In what has become commonplace for Chinese porcelain at Brunk Auctions, it surpassed its presale estimate of $300/$600 to sell via LiveAuctioneers.com for $12,650. Image courtesy Brunk Auctions.

Enthusiasm enveloped the 60 other Chinese lots like mist over the South China Sea. An oval 19th-century Chinese doucai bowl thought to bring no more that $1000 sold for $5750. A 19th century Chinese blue silk dragon robe in open-weave metallic thread with a high estimate of $2,000, hit $9,775. Brunk staffers are hoping that the Year of the Tiger will be equally auspicious.

While Asian art performed with flying colors in Brunk’s January sale – which grossed $1,133,728 – it was Americana that chalked up the highest prices. The sale’s lead item was the first detailed published map of the entire state of Georgia by Daniel Sturges, Georgia’s meticulous surveyor general from 1797 to 1809. After gathering data for the map for 20 years, Sturges, in need of money, sold it to his brother-in-law, Eleazer Early, prior to its 1818 publication.

The map, which is said to have guided the Marquis De Lafayette on his 1825 tour of the United States, was produced in 50 5¾-inch by 9-inch highly detailed panels. It last sold in 1967 at Parke-Bernet Galleries, New York City. At Brunk’s January sale it doubled its presale estimate, selling to a dealer for $63,250.

Two different armchair styles, one Continental, the other American, did exceptionally well. Bringing $26,450 (est. $12,000/$18,000) was a set of six French open armchairs, four with the stamped signature “H. Jacob” on the rear rail. In the late 18th century, Paris designer Henri Jacob was noted for his carved and gilded furniture. The six beechwood chairs were carved, gessoed and painted with molded back and arms and stop-fluted turned legs. They last sold at Sotheby’s New York, in 1978.

A North Carolina Chippendale armchair attributed to Perquimans County between 1760 and 1790 opened at $1,000, the lower limit of its presale estimate. The chair was walnut throughout with shaped arms, arched backrest, pierced splats and square legs with box stretcher. The legs had been reduced. A nearly identical armchair is listed in The Furniture of Coastal North Carolina, 1700-1820, John Bivins’ classic reference text. The coastal Carolina Chippendale chair sold to the phones for $18,400.

Among other Continental lots, a pair of French Louis IV style doré bronze candelabra did well. Each had nine arms with a cherub by a plinth holding an urn and a quiver of arrows beside a floral sash. The pair, from the 19th century, brought $12,650 (est. $3,000/$6,000).

Of the 16 samplers and needlework pieces in the sale, the clear standout was the 1842 sampler by Latistia Young of Columbus County, North Carolina. She stitched her signature as “Letsy Ann.” Her four-line verse, six lines of letters and numbers and a tree, sheep, stag and vines in silk on a 16-inch by 16¾-inch piece of linen brought $4,370. The selling price was at the upper end of the estimate.

More Chinese porcelain surprises are promised for Brunk Auctions’ Feb. 20-21 sale, which will feature Internet live bidding through LiveAuctioneers.com. Thomas English Cody’s collection, much of which was accumulated in the 1930s, will take center stage. The collection includes a pair of Imperial yellow ground bowls made for the Qianlong Emperor (1736-1795). For additional information, call 828-254-6846. 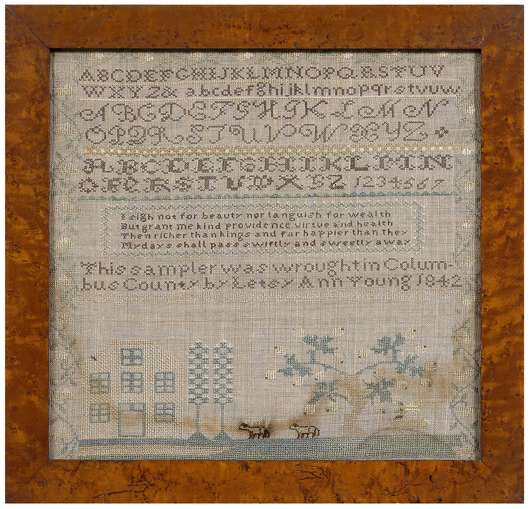 The verse included on Letsy Ann Young’s 1842 sampler was from a hymn titled “Morality” published in 1835. Variations of the tall trees and long-tailed sheep may connect Young’s 16 inch by 16¾ inch silk on linen sampler to the Charleston, South Carolina, area. It sold for $4,370. Image courtesy Brunk Auctions. 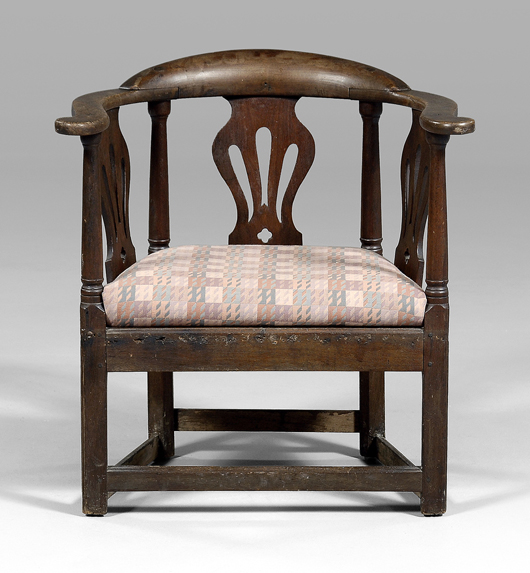 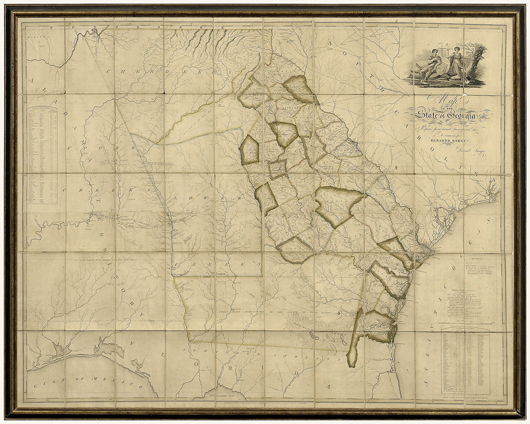 Two pages in the catalog were devoted to the 1818 Georgia map “prepared from actual Surveys and other Documents for Eleazer Early.” Daniel Sturges did the research, Samuel Harrison the engraving. It was the sale’s top lot at $63,250. Image courtesy Brunk Auctions. 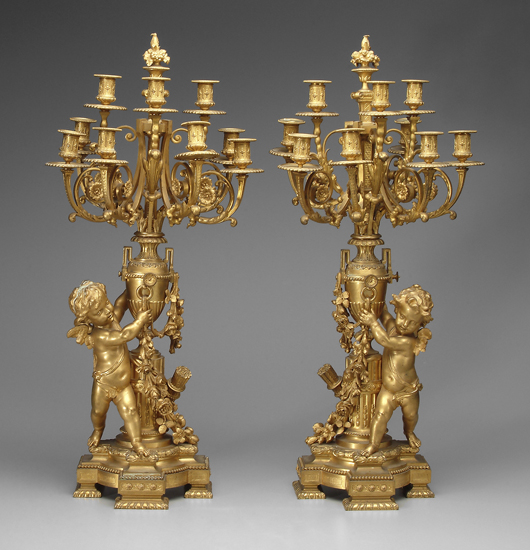 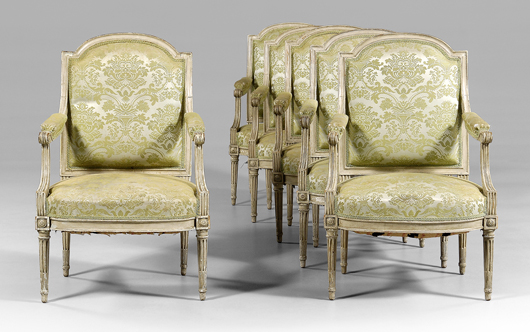 A set of six Henri Jacob open armchairs (fauteuil) were from a Charleston, S.C., collection. They previously sold at Sotheby’s New York in 1978. At Brunk’s January 2010 sale, they brought $26,450. Image courtesy Brunk Auctions.