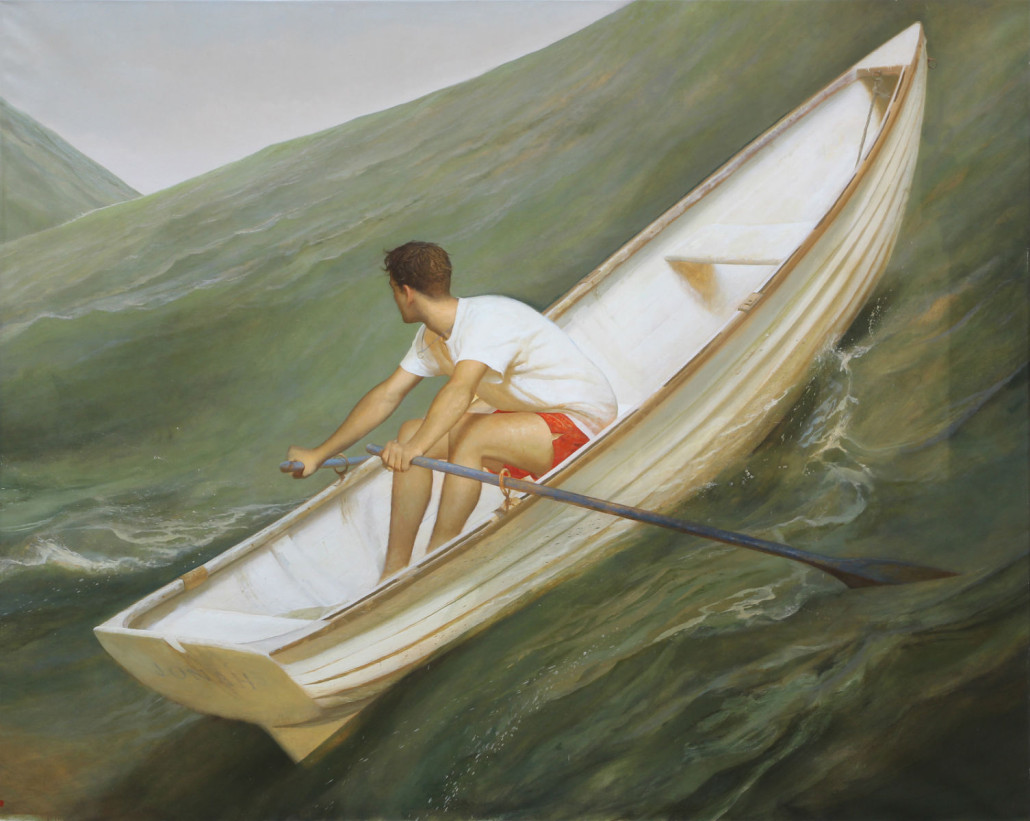 OAKLAND, Calif. – Clars Auction Gallery’s Nov. 12 and 13 sale featured a major installment of the property from the Thomas J. Perkins Estate (San Francisco and Belvedere, Calif., and his famous Maltese Falcon yacht). The impressive results of this sale were driven in part by Perkins’ colleagues and friends plus collectors worldwide who came out to bid on items from his extraordinary lifestyle and collections. The sale earned over $2.5 million and was Clars’ strongest November auction in their history. Absentee and Internet live bidding was available through LiveAuctioneers.com.

“Clars was very honored to have been selected to represent this important estate. It was very exciting for us to see the number of Thomas Perkins’ friends, acquaintances and business associates who were familiar with the exceptional property he had and their desire to own a piece or pieces from his amazing lifestyle,” said Redge Martin, president of Clars.

In addition to the Perkins estate, this sale also featured property from several other highly notable estates, museums and special collections.

Although each category of fine art did exceptionally well, the most exciting lot of the entire sale which also set a new global record for the artist, was the painting Lifeboat (above) by Bo Bartlett (American, b. 1955) which sold for $296,500. This work sold well over its $30,000-50,000 estimate and five times higher than the previous record held. This large oil on canvas had the solid provenance of coming from the estate of San Francisco venture capitalist Thomas J. Perkins, and was a particular favorite piece of the former owner. This painting graced the interior of his famous yacht, The Maltese Falcon.

“We had numerous telephone bidders from all over the world on this lot who all very much wanted this work, that some believe to be Bartlett’s greatest. Needless to say, the outcome was beyond our expectations,” said Rick Unruh, Clars’ vice president and director of fine art.

The Hudson River School was the next category to shine with the colorful, luminist oil on canvas Greenwood Lake, New Jersey (below), by Jasper Cropsey (American, 1823-1900) selling for $84,700, followed by the large, meticulously executed wooded scene painting Kaatskill (Catskill) Creek by Worthington Whittredge (American, 1820-1910) achieving $66,550. 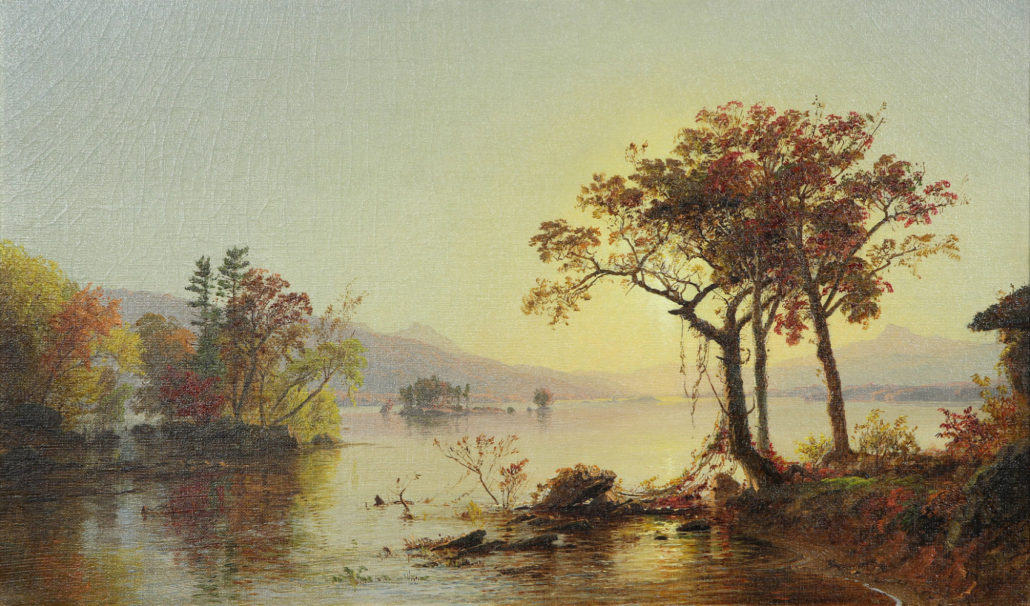 Prints and multiples had outstanding results as well with three individual and vibrant color silkscreens (below) by Andy Warhol (American, 1928-1987) from the 1972 “Sunset” series culminating in a total of $111,925.

Always a favorite in the San Francisco Bay Area but now a favorite internationally with Abstract Expressionist collectors, Richard Diebenkorn (American, 1922-1993) once again triumphed in this category with the intensely provocative color aquatint, “Touched Red (1991),” achieving $54,450. 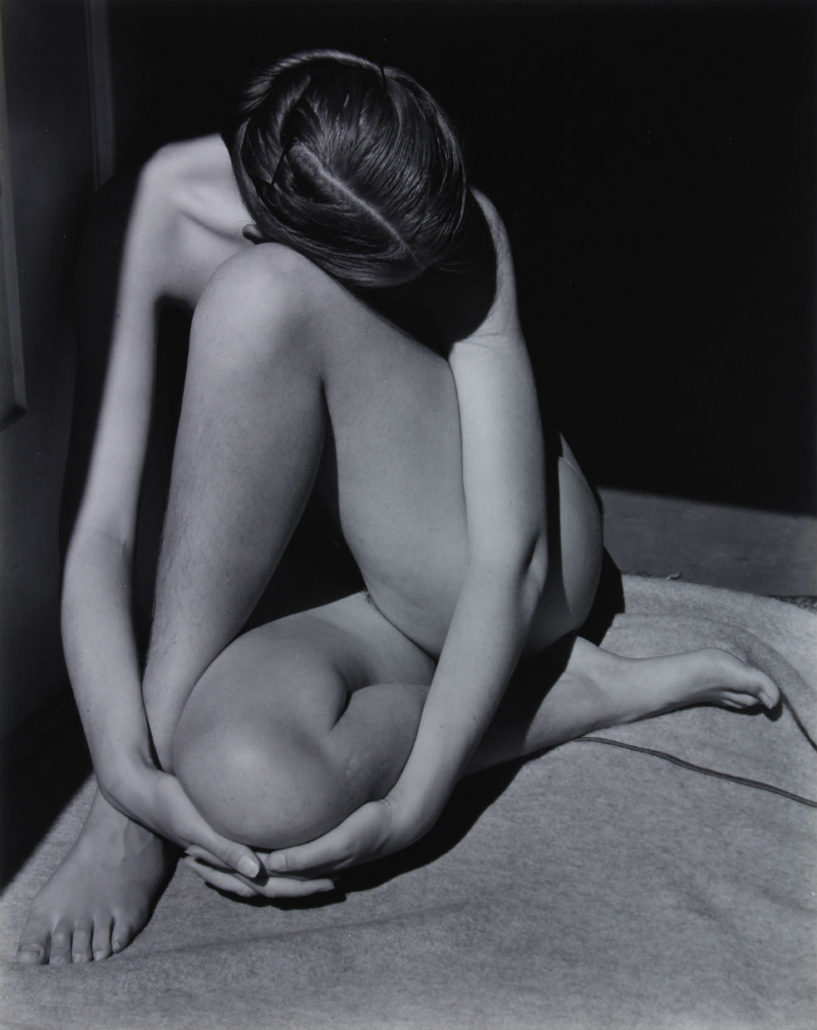 The decorative arts and furnishings from the Perkins estate had incredible results as well with most lots going for over high estimate. An Augustus Humbert 1851 $50 gold slug minted in San Francisco, PCGS XF40, surpassed its high estimate selling for $36,300 (below). 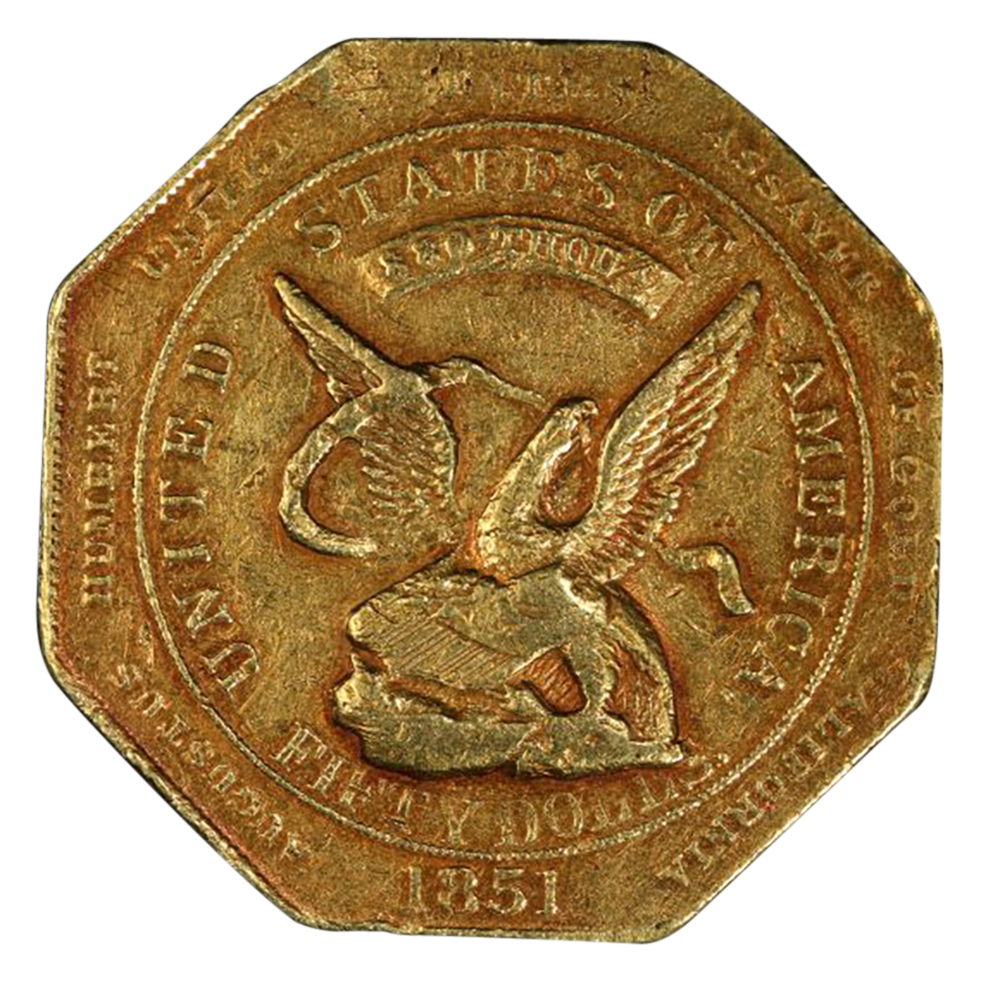 In addition to property from the Perkins estate, prominently featured at the sale was a George Nakashima “Conoid” coffee table, circa 1964, that achieved $12,100. And for the luxury traveler, a rare circa 1920 Louis Vuitton steam trunk doubled its high estimate selling for $15,730.

Calligraphy from master calligrapher Yu Youren (Chinese, 1879-1964) came from the estate of a prominent Republic period official and provided both great excitement and unexpected high prices. The top lot in the collection was a handscroll dedicated to his son Yu Wangde (below). This ink on paper was signed on the left and inscribed with the date (Republic) 36th year seventh month. Estimated to sell for $30,000–$50,000, highly competitive bidding drove the final selling price to $84,700.