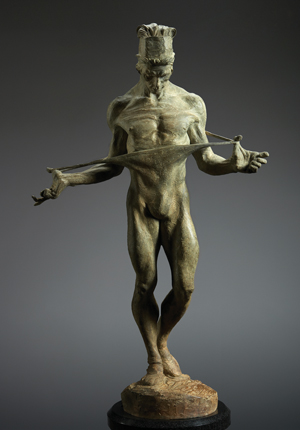 OAKLAND, Calif. – California artist Richard MacDonald’s sculptures are widely recognized – from his Flair Across America, installed at Centennial Park in Atlanta for the 1996 Olympic Games, to Momentum, installed at Pebble Beach to commemorate the 100th U.S. Open.

On March 14 Clars Auction Gallery sold McDonald’s Nureyev Half Life, 1990 for $53,330, setting a new world record for the artist. The patinated bronze sculpture of the ballet dancer measured 44 inches high by 25 1/2 inches wide by 18 inches deep. It was signed and dated “R. MacDonald 90.”

It was one of 17 MacDonald sculptures sold by Clars that day, the most extensive collection of the contemporary master’s work ever offered at auction. The collection came to Clars from a former real estate developer.

The sculptures ranged in size from 14 inches tall to 54 inches tall. Presale estimates ranged from $1,000 to $50,000. MacDonald is considered by many the foremost figurative sculptor working today. His bronze sculptures show the power, grace and beauty of athletes, dancers, mimes and nymphs.

Until Clars’ recent sale, only 14 of his works had been offered at auction, with the highest result being $13,200, achieved in a 2008 sale at Altermann Galleries.

MacDonald’s patinated bronze titled Myth and Legend: Diana & the Coursing Cheetahs sold for $13,040 at Clar’s auction. The 1996 work represents the third highest price ever paid for a MacDonald sculpture at auction.

Overall, Clars’ March sale realized strong prices across the board with other highlights being the work by another well-known sculptor, Louis Ernest Barrias (French, 1841-1901). His gold patinated sculpture entitled Nature reveals Herself was estimated to achieve $8,000-$12,000 but sold for $21,330. A diamond ring in platinum set with a 4.18-carat round diamond sold for $59,250.

Highlighting the paintings category was a framed oil on canvas entitled Silver Veiled Horizon by Hanson Duvall Puthuff, which achieved $13,035. KPM performed well as the framed porcelain plaque The Expulsion of Hagar and Ishmael sold for $9,480. On the furniture side, a stunning Napoleon III ormolu and porcelain mounted marble-top side cabinet brought $10,665. 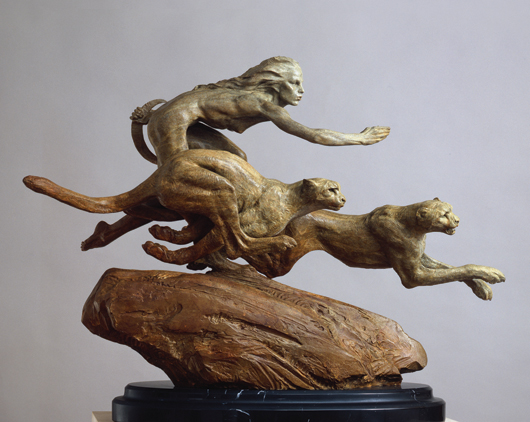 Richard MacDonald’s ‘Myth and Legend: Diana & the Coursing Cheetahs’ sold for $13,040. Done in 1996, it represents the third highest price paid at auction for the California artist’s work. Clars Auction Gallery.