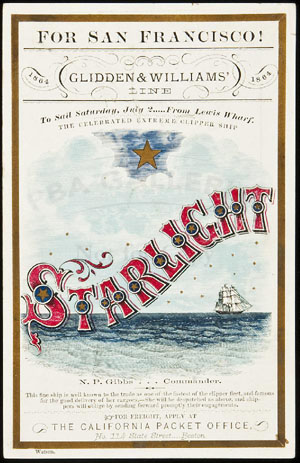 Schwed, a California collector, has in recent years devoted his energy to his important Indian basket collection, and decided to part with his collection of 90 California clipper ship sailing cards. It was the largest such single collection to come to auction since the 1990 Siegel sale in New York. Also selling was the balance of his Californiana material, which included almost 50 lots of 19th-century Native American photographs, pictorial letter sheets, 1850s gold rush letters, early California newspapers and California maps.

A rare California gold quartz walking stick with a gold knob and an original piece of gold in quartz mounted on top, which was presented by San Francisco department store founder Adolphe Roos and his sister to their father and had descended in the family, brought $21,600. Prices include a 20 percent buyer’s premium.

The high price proved the desirability of this form of artistry unique to California, where pieces of unrefined quartz with gold veins were incorporated into jewelry and objects, a symbol of California’s wealth. The San Francisco firm of Bartlett and Sherwood claimed to be the inventors of gold quartz jewelry and first exhibited it at the New York Crystal Palace Exhibition in 1853.

The clipper ship sailing cards were a sale highlight, and were issued in the 1850s and ’60s to advertise clipper ships that were loading cargo for San Francisco and leaving ports in Boston and New York to round the horn for the West Coast. The cards were attractively printed in color and have been widely collected over the years, although issued in fairly small numbers. Most reside in a few museums, libraries and a small number of private collections. According to PBA’s senior auctioneer, George Fox, someone phoned in about 20 minutes before the auction began and left strong absentee bids on all 90 lots of the clipper cards.

“At that point, we knew the auction would be a great success.” The bidding was widespread with cards going to both institutions and collectors across the country, all realizing this was a rare chance to see so many at auction at one time. The star of the sale, the Young America, one of the most famous clippers, was a particular rare card as it advertised the reverse journey from San Francisco back to New York and was printed by Bancroft in San Francisco went to an institution at $5,100, on an estimate of $4,000/6,000. The Wild Rover and Starlight, both went to private collectors for $4,500 each. The balance of the bid prices ranged from $500 up to the $4,500 range, with approximately 60 of the 90 cards falling well into four figures.

A nice 1851 manuscript California gold rush diary from the Northern Mines District of Nevada City fetched $10,800 from a private collector, again proving that content is everything. This diary had entries for every day the man worked in the diggings, and included him viewing the fire that burned down Nevada City, and watching a fight between a grizzly bear and a bull. Twenty-five lots of gold rush letters written from the California mines back to Eastern home fronts brought solid prices, most within the estimates, ranging from $250 to $1,800.

The 14 California pictorial letter sheets, which are actively collected, all sold well, with the rarest, the Sacramento Steam Boat Landing bringing $2,040. The early newspaper section was highlighted by an 1847 issue of the California Star, which was the first newspaper published in California by Sam Brannan which hammered at $1,020.

Largely private collectors vied for the 38 lots of Hawaiiana material, consigned from an old Oahu collection and fresh to the market. It included many pamphlets concerning the 1895 Rebellion that all sold well, although the highest price realized was for an exquisite presentation morocco binding of a book on cavalry tactics given to King Kalakaua in 1882 by French military friends he had met on his visit there in 1881, which crossed the block at $2,700.

The map section was led by the rare 1862 Philadelphia printing of the Desilver atlas with 79 maps which sold at $4,800, and finally 50 lots of 19th-century Native American stereo views, cabinet cards and photographs mostly all went to private buyers in the $300 to $800 range.

Complete auction results are available at www.pbagalleries.com and for additional information, please contact the Galleries at 415-989-2665 or pba@pbagalleries.com 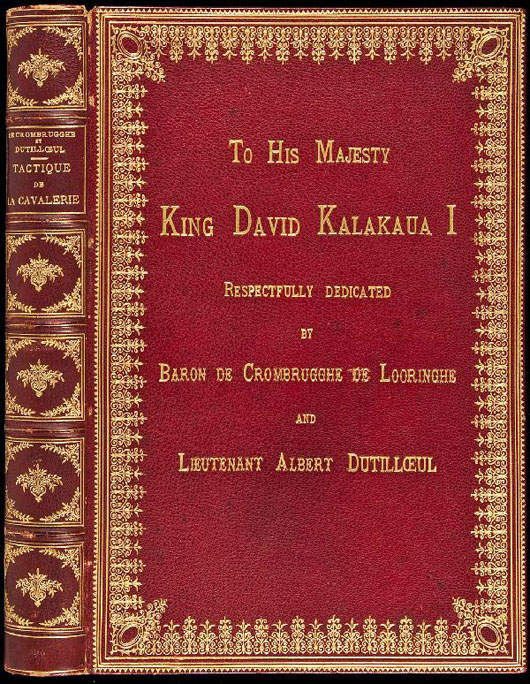 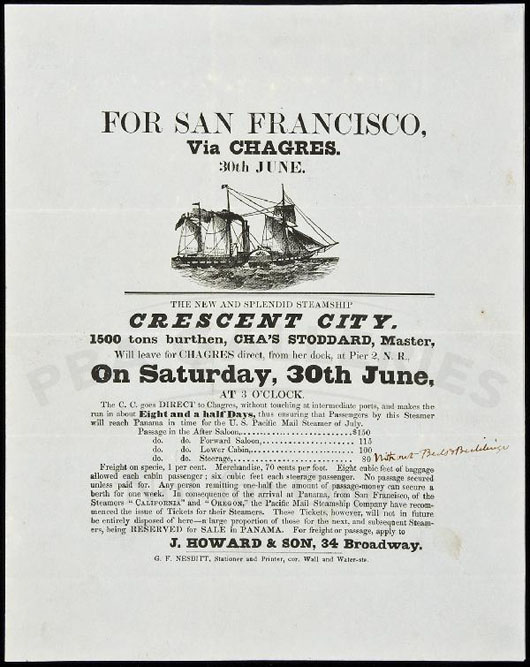 Lettersheet advertising the departure of he steamship Crescent City from New York City to Chagres, 1949, 9 3/4 inches by 8 inches, rare circular/broadside in the form of a four-page lettersheet. Sold for $5,100. Image courtesy of PBA Galleries. 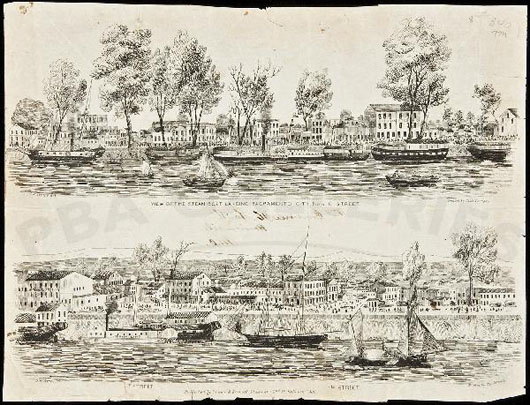 Rare California walking stick with a gold knob and an original piece of gold in quartz mounted on top. Sold $21,600. Image courtesy of PBA Galleries.