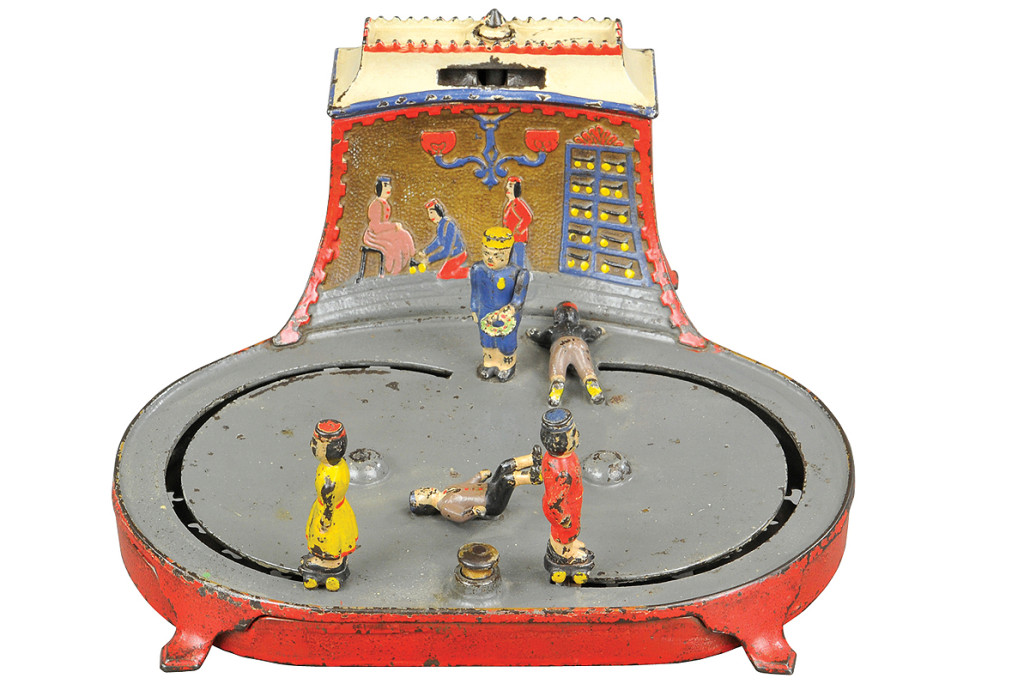 VINELAND, N.J. – In the week leading up to Bertoia Auctions’ October 3 sale of the Clive Devenish antique bank collection, Part I, all eyes were on a potential troublemaker: Joaquin. As the powerful hurricane barreled toward the East Coast, possibly to collide with another coastal storm, there were decisions to be made. Would the sale go on as planned? Yes. Bertoia Auctions’ owner, Jeanne Bertoia, had been keeping close tabs on Joaquin’s path, and once it became evident that the hurricane was turning out to sea, she and her team assured all callers that the much-anticipated event would be going forward as planned.

Although heavy rain continued to pummel New Jersey on auction day, resulting in a lighter-than-usual crowd, it did not stop collectors from pursuing their choice of prized banks from the spectacular 40-year Clive Devenish collection. Many had previewed well ahead of time and left absentee bids, while others participated by phone or online through LiveAuctioneers. The boutique offering of 175 lots in Part I garnered an impressive $1,011,180 inclusive of buyer’s premium.

Leading the top 10 was a circa-1880 Kyser & Rex Roller Skating mechanical bank (shown at top) with five skating figures and a complex action. Considered one of the finest of few known examples, it came to Devenish with prestigious provenance from the F.H. Griffith and Steven Steckbeck collections. The beautiful near-mint example of fine artistry in cast iron was sold for $120,000.

Several mechanical banks were accompanied by their rare original boxes, including J. & E. Stevens’ circa-1906 classic known as Boy Robbing Bird’s Nest. In virtually unplayed-with condition and with a trail of ownership that could be traced back to the legendary Walter P. Chrysler collection, it closed at $42,000. 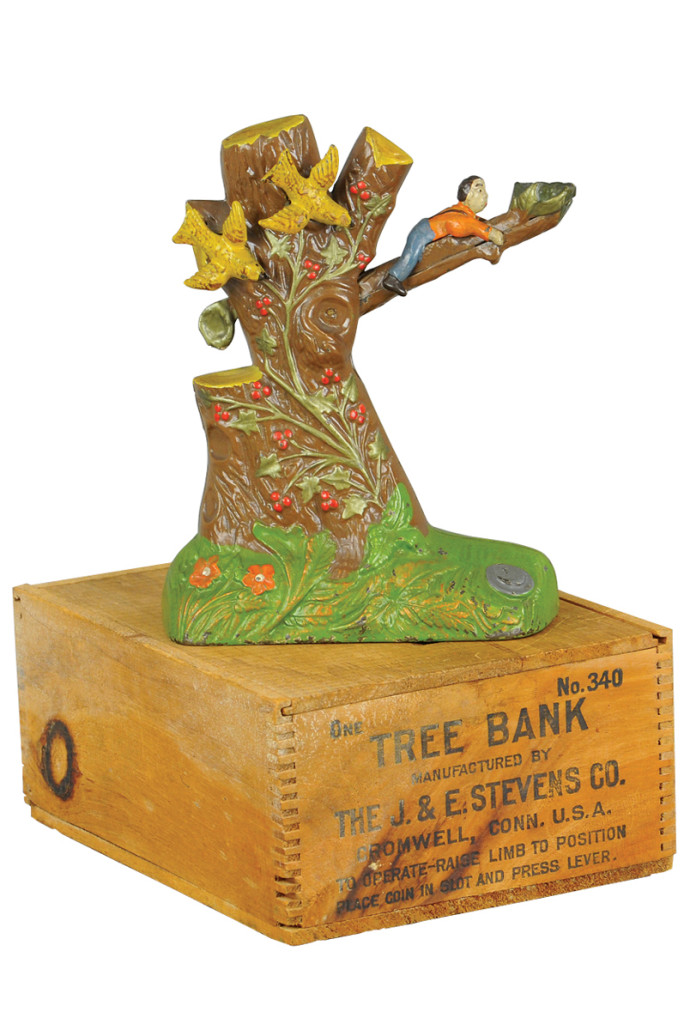 Also retaining its original factory box was a Shepard Hardware Co., Mason bank patented in 1887. A popular bank with collectors, it depicts two tradesmen working on a brick wall – a mason who holds a trowel and brick; and a hod carrier. Ex Ferdinand Weider collection, the near-mint mechanical sold for $26,400.

A red-base version of Stevens’ Chief Big Moon bank, patented in 1899, crossed the auction block in superb condition, with bright paint and its original factory box stamped “Indian Camp Bank.” Purchased from a private San Francisco estate in 1980, the bank remained in the Devenish collection for the next 35 years. Its selling price was $24,000. 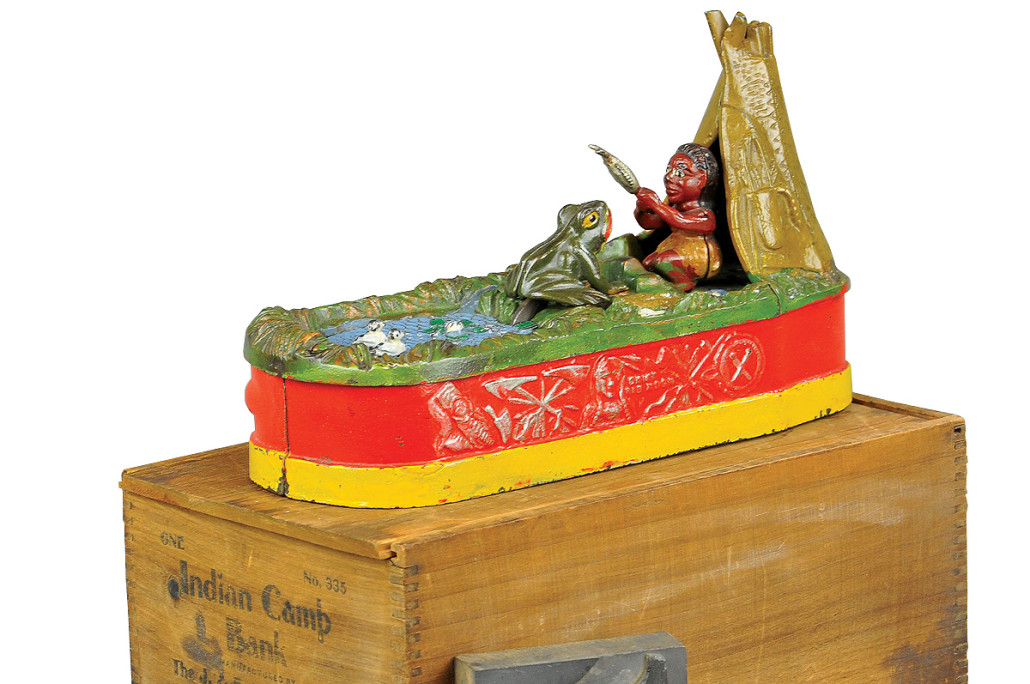 An amusing circa-1888 Stevens Milking Cow from the noted Charles A. Bailey pedestal series of mechanical banks was described in Bertoia’s catalog as being the only all-original, unrepaired example known to have reached the auction marketplace in the last 20 years. Like the Boy Robbing Bird’s Nest, the Milking Cow appeared to be in unplayed-with condition. Bidders expressed their approval of the bank’s vibrant factory paint and natural patina by pushing it well beyond its high estimate to $39,000. 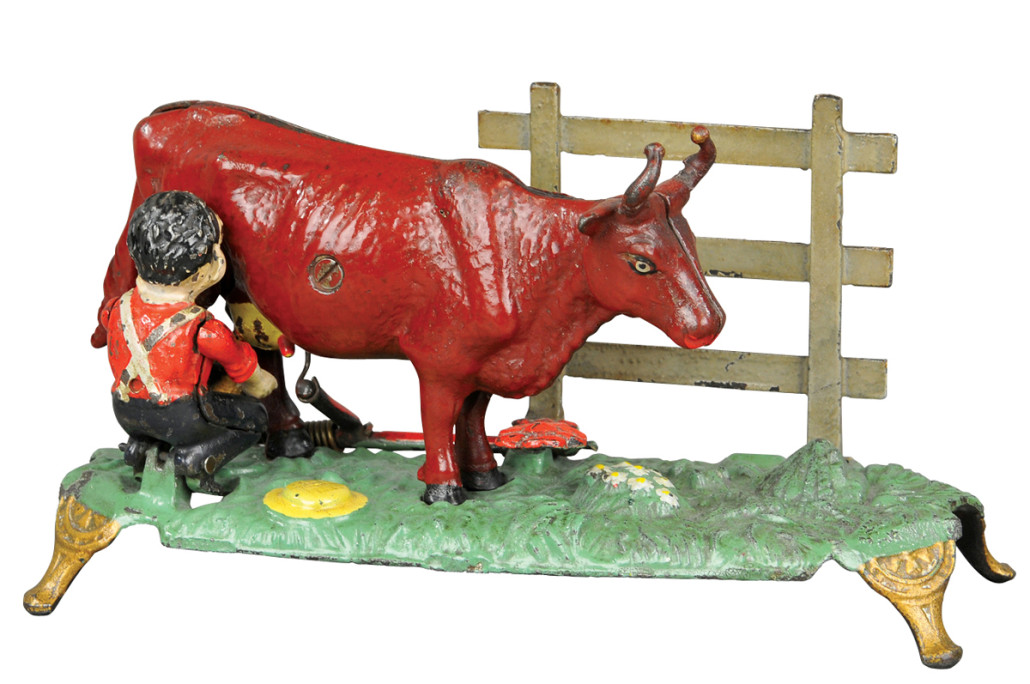 Also designed by Charles A. Bailey, a lead and wood Springing Cat mechanical bank, patented in 1882, featured an action that involved the release of a small mouse and the cat’s unsuccessful pursuit of the quickly retreating rodent. Formerly in the F.H. Griffith collection, the Springing Cat realized an above-estimate $33,000.

Yet another mechanical bank that appeared to have spent much of its life on a high shelf, away from sunlight and curious children, was a 5-hole version of the Hold the Fort Bank. Patented in 1877 but of unknown manufacture, the brightly colored artillery-action bank with components that included a cannon, target and American Flag settled at $36,000.

Leading the still bank lineup was a circa-1915 Hubley Mascot, which depicts a young baseball player standing atop an American League baseball. Scarce and desirable, the bank had been purchased by Devenish at a 1984 estate sale in San Francisco. It sold at Bertoia’s for $7,200. 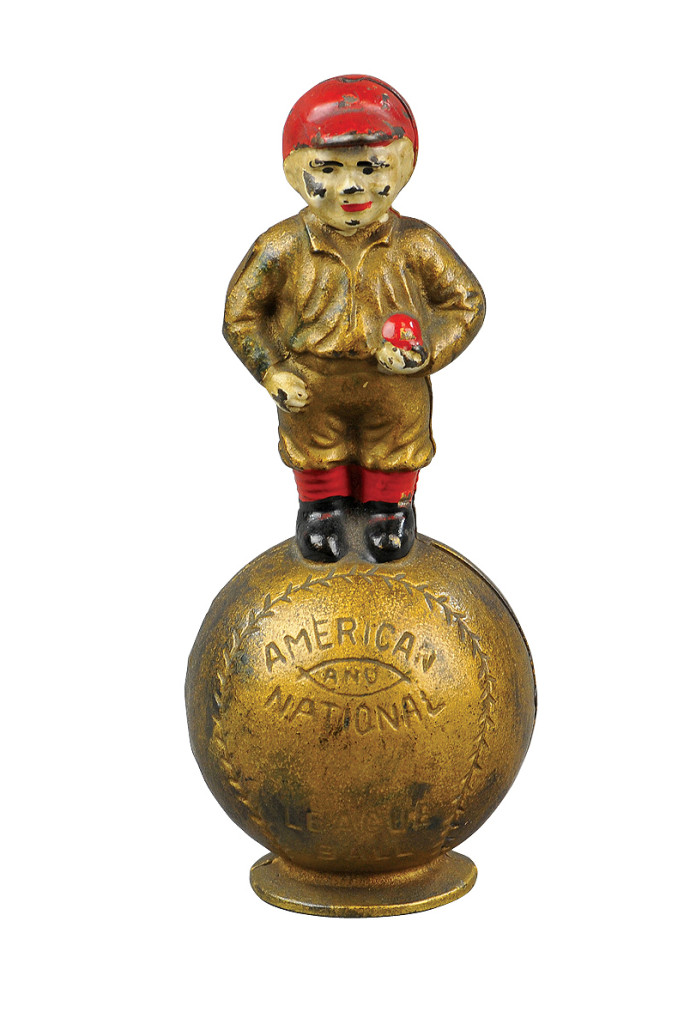 Another testament to the strength of still banks was the J. & E. Stevens Battleship Oregon, made around 1902. Intricately cast and fastidiously detailed with boats, masts and painted-on ocean waves, the cast-iron craft set sail at $6,600. 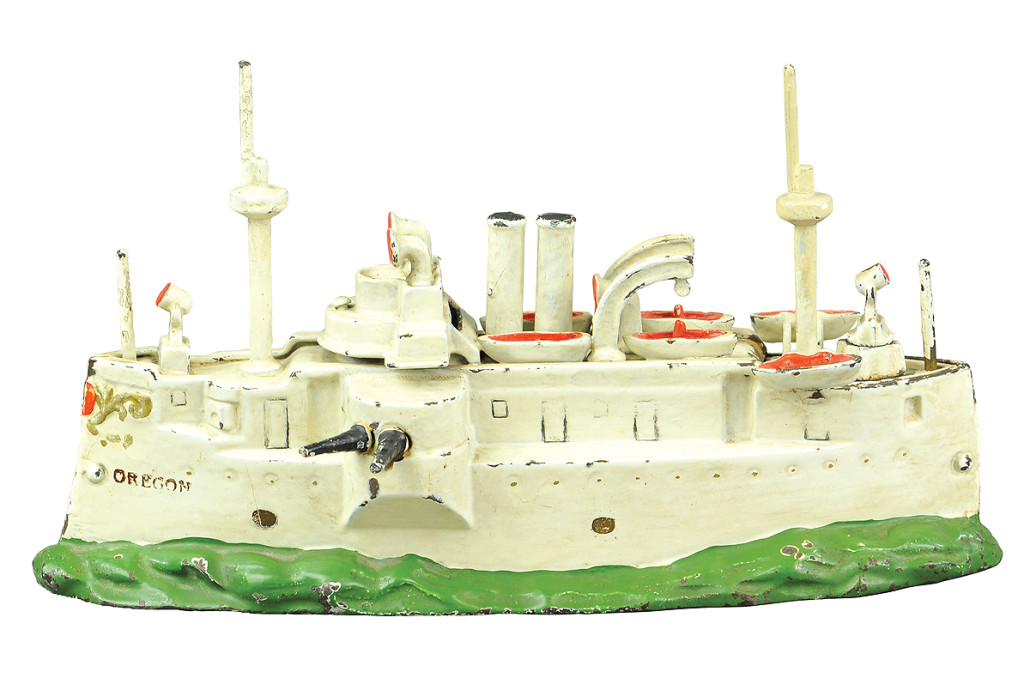 Most of the spelter banks offered in the sale achieved prices within or above their respective estimate ranges. A circa-1900 to 1910 Rabbit Head bank made by the renowned German toy soldier manufacturer Heyde exceeded expectations at $1,320; as did a circa-1910 to 1920 Terrier on Basket, which earned $1,200. Of a similar age, a Standing Bear with Top Hat took a bow at $840; while an appealing example of Rabbits at Orange Ball, with original clasp, retired at $720.

Those who were able to attend the 2½-hour auction in person were well rewarded by the atmosphere of camaraderie and the Bertoia family’s open-door brand of friendship.

“We enjoy hosting events here at the gallery and do everything we can to encourage live attendance, not only for the hands-on viewing but also for the important experience of mingling with likeminded collectors who share their passion,” said Jeanne Bertoia. “We make every effort to provide an environment that makes people feel welcome. At every auction our guests tell us how much they appreciate our hospitality, including our now-signature ‘foodie’ sessions with catered food and beverages,” said Jeanne Bertoia.

The “short-and-sweet” sale of the Devenish banks spurred a very focused style of bidding that larger sales do not exhibit, Bertoia Auctions associate Rich Bertoia observed. “It seemed that bidding decisions were made far in advance of the auction. Collectors appeared to know exactly what they wanted. The buzz in the air was that the banks were in great condition, but were they going to be affordable? And as with any auction, the answer was the same – some items would go on to exceed estimate, but there would also be some great buys,” Rich said.

Commenting on the state of the market with respect to banks, he said: “Outstanding items are still bringing very good prices. That’s the case with almost any category of antiques. The interest curve for banks has held strong for many years, and the hobby is still at its peak of popularity. We noticed a few new collectors at the auction on October 3rd, and that’s always a good sign.”