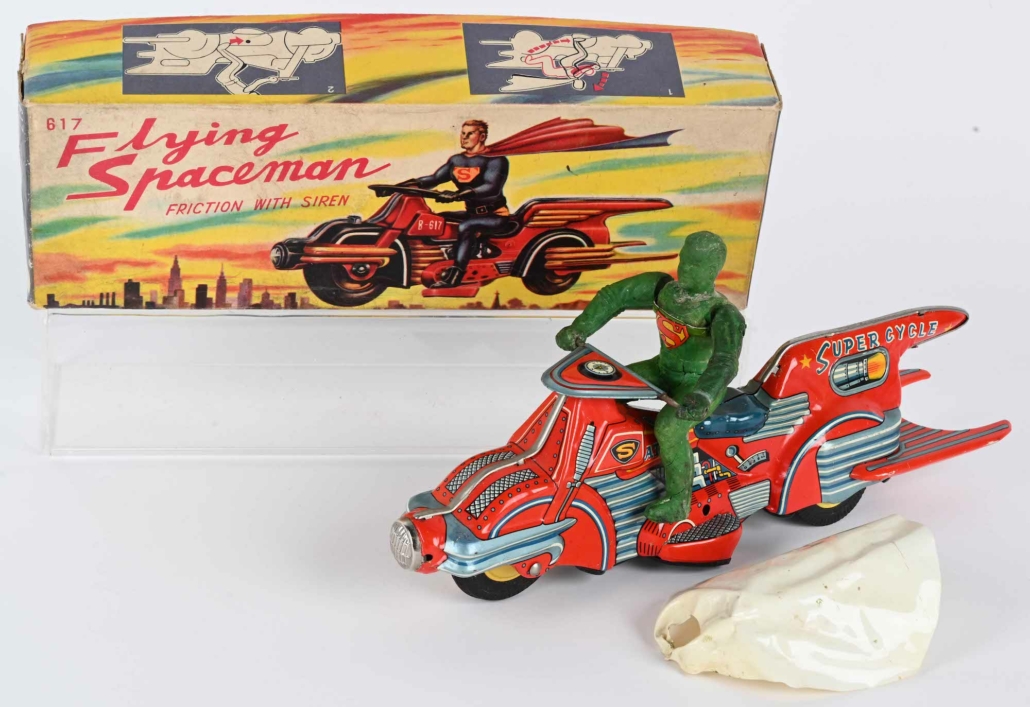 Bandai (Japan) friction-powered ‘Flying Spaceman’ on ‘Super Cycle’ with original caped, green rubber “Superman” figure. Cape shown in foreground. Accompanied by colorfully illustrated box lid. The top lot of the sale, it sold for $55,200 against an estimate of $15,000-$25,000.

WILLOUGHBY, Ohio – Bidders from more than 20 countries worldwide brought their A-game to Milestone’s May 1 Spring Spectacular Toy Auction, which ran 13 hours due to sustained bidding, primarily via the Internet. Interest was especially strong for robots, early comic character toys and an extraordinary collection of 150+ vintage toy boats and electric outboard motors in their original boxes.

“It was an exciting sale with lots of international action, especially on the robots,” said Milestone Auctions co-owner Miles King. “It seemed that everyone was waiting till the day of the auction to bid, because as soon as a lot would open, the bidders would all jump in at once. They obviously were keeping their items of interest to themselves, as smart bidders often do.” 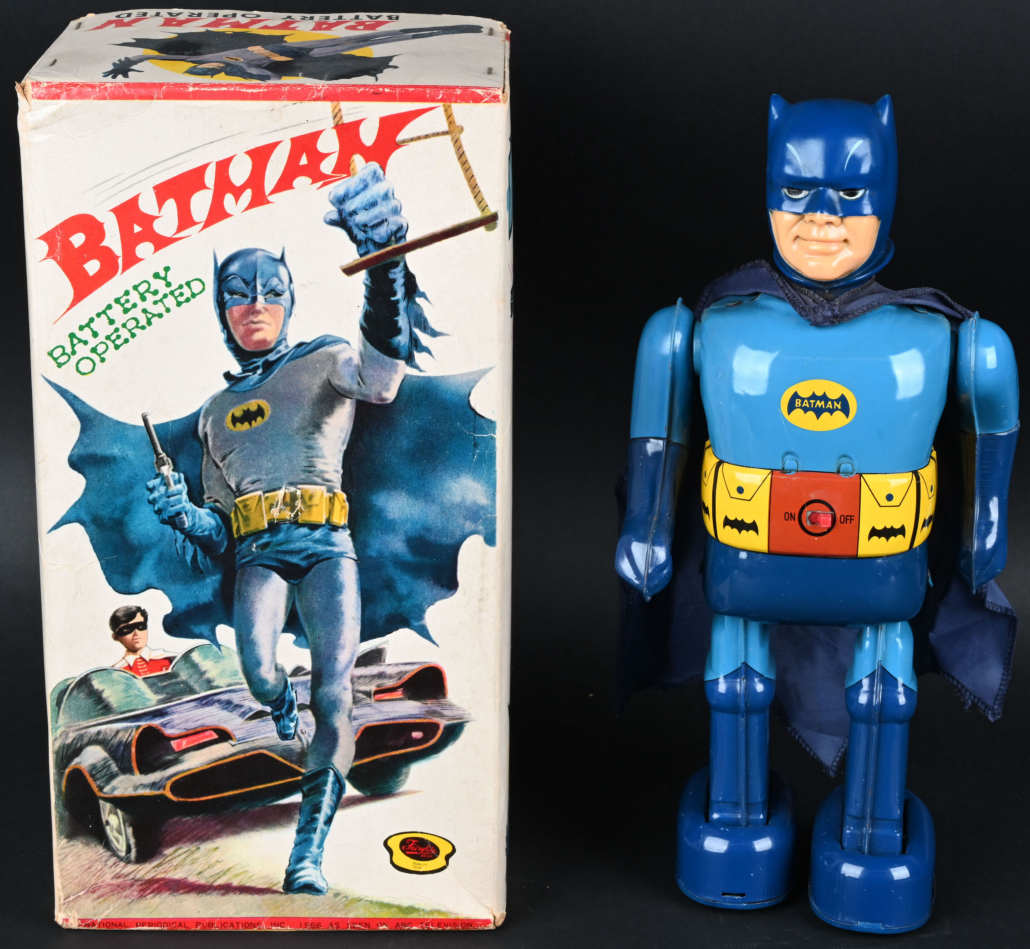 King said he and business partner Chris Sammet have always known that their company had an excellent following among robot and space toy collectors. “We just needed a grouping of robots like the one we had in this sale to prove that we can reach the right buyers and get top prices,” King said. “Not long after the sale we received a call from a robot collector who had seen the results. Now he wants to consign with us.”

The robot lineup contained impressive examples of some all-time classics and was led by an elusive Bandai friction-powered “Flying Spaceman” on a “Super Cycle” (shown at top of page). With its original caped, green rubber “Superman” figure wearing its original red and yellow S-logo chest shield, and its correct, colorfully illustrated box lid, it was bid to $55,200 against a pre-sale estimate of $15,000-$25,000. The toy went to a US-based buyer. 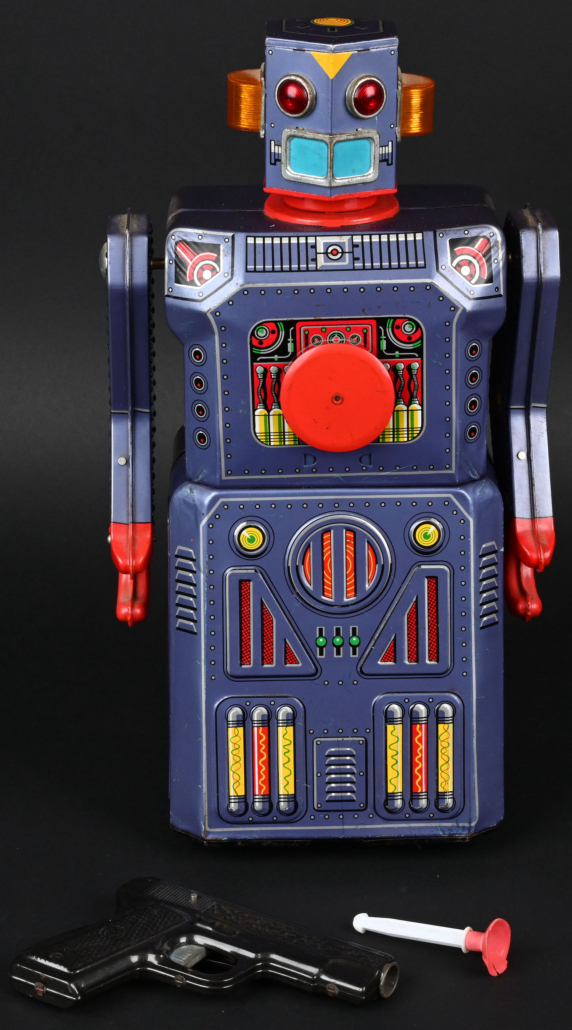 Masudaya (Japan) 15-inch battery-operated Target Robot from the famous ‘Gang of Five.’ All original and complete with correct dart gun and one dart. Sold above estimate for $13,800

From Masudaya’s celebrated “Gang of Five,” a 15-inch-tall Target Robot, all original and complete with its dart gun and one dart, sold above estimate for $13,800; while a Daiya (Japan) blue version/tin head battery-operated Astronaut with its original pictorial box was chased to $3,480 against an estimate of $2,000-$2,500.One of the most popular Superhero toys ever made, an example of Nomura’s 12-inch battery-operated Walking Batman, all original [including cloth cape] was accompanied by its super-clean, original pictorial box with a fabulous image of the Caped Crusader, Robin and the Batmobile. It settled just above its high estimate, at $8,100. 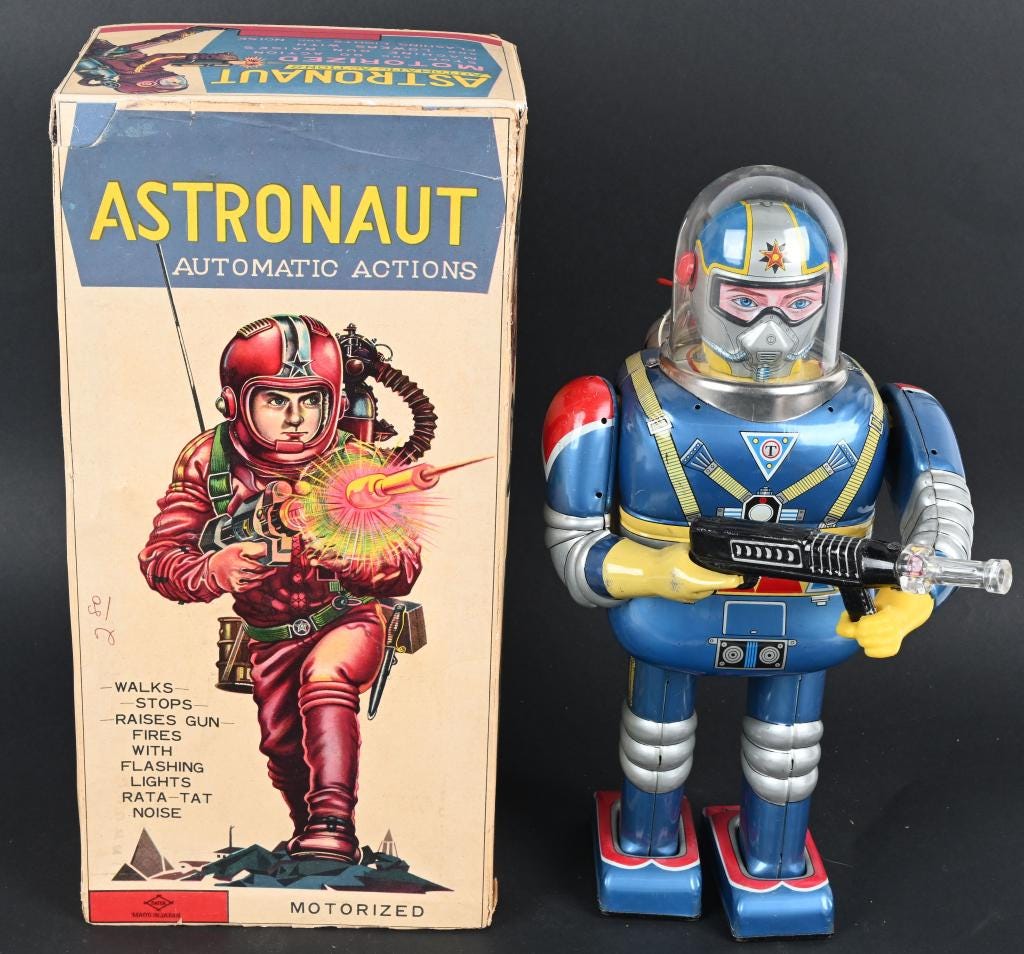 Daiya (Japan) battery-operated Astronaut with original pictorial box. Blue version with tin head. All-original and complete example. Sold for $3,480 against an estimate of $2,000-$2,500

One of the most comprehensive collections of comic character toys to reach the marketplace in several years included an array of whimsical Disney favorites, including Mickey and Minnie Mouse, Donald Duck, Goofy, Pluto and many others. Bidders were on high alert on both sides of the Atlantic and Australia, as well, when a pre-World War II English-made Mickey Mouse windup “krazy kar” rolled into the spotlight. 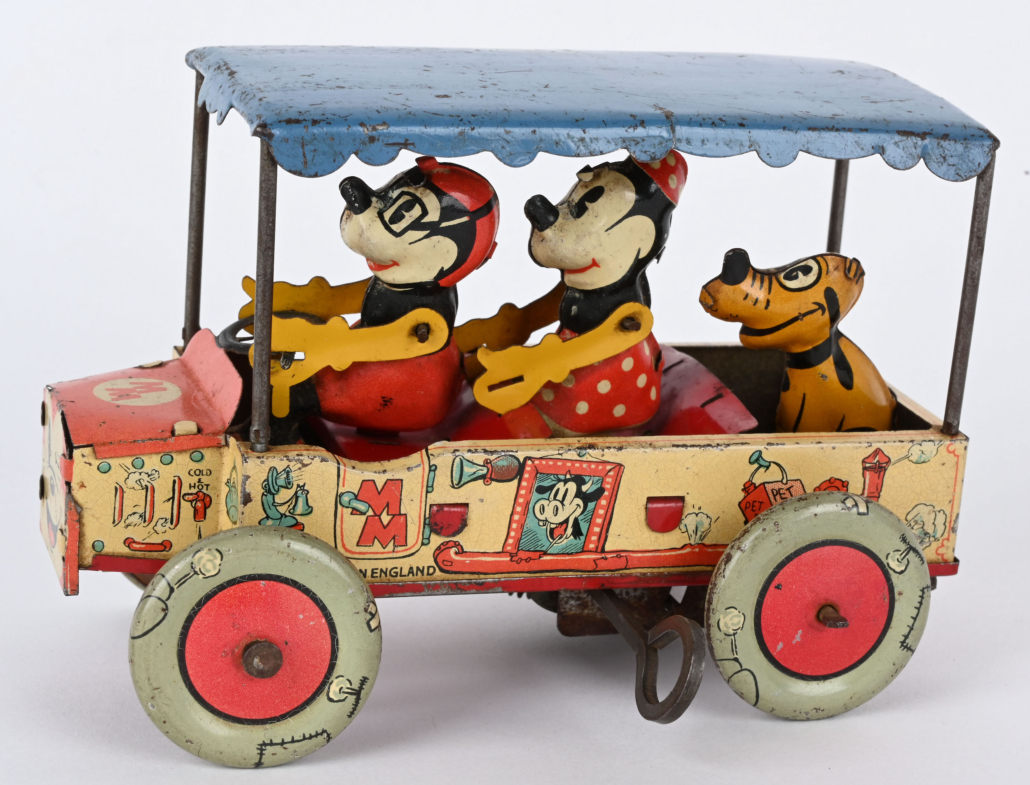 Extremely rare Walt Disney-authorized Mickey Mouse Krazy Kar with figures of Mickey, Minnie Mouse and Pluto, and colorful exterior images of other Disney characters. Made in England pre-World War II. Sold for $34,800 against an estimate of $15,000-$20,000

This exceedingly rare toy with an eccentric action – one of possibly three or four known – features three-dimensional figures of driver Mickey with passengers Minnie Mouse and Pluto, and is amusingly decorated on its exterior with images of Mickey, Donald Duck and Clarabelle the Cow. Marked “Made with Permission of Walt Disney Mickey Mouse LTD,” it had been cataloged with an aggressive pre-sale estimate of $15,000-$20,000 but went on to command $34,800. 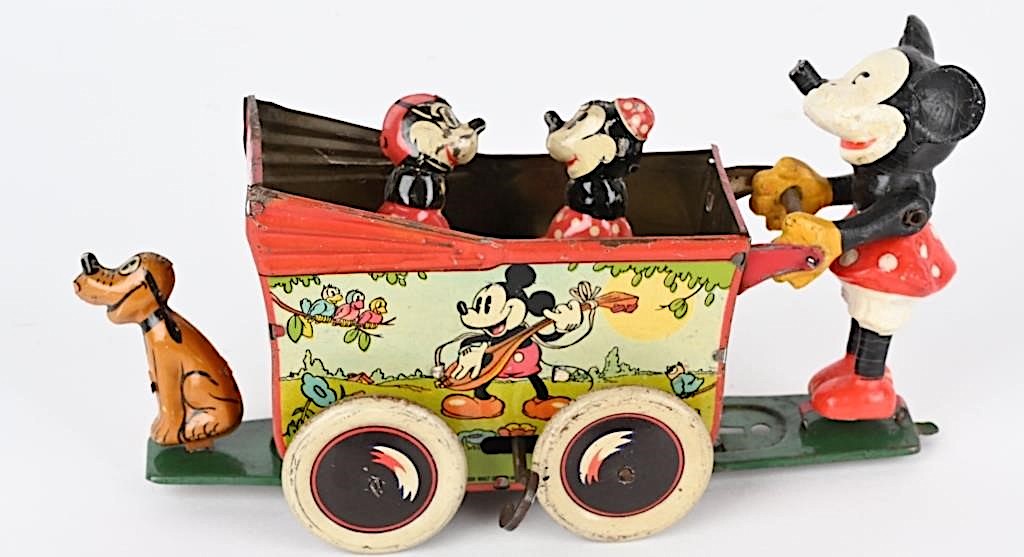 Other popular Disney toys included a scarce 1930s Wells (England) tin windup Minnie Mouse carriage with baby Mickey and Minnie figures inside and Pluto seated on the front bumper. Collectors validated its rarity when a heated bidding competition pushed it to $11,700 against an estimate of $2,500-$3,000. Celluloid Disney toys, which have shown softness in the marketplace for some years, now, found a redeemer in a very scarce 6-inch-tall Donald Duck in Barrel celluloid windup toy, which sold for $4,680 against a pre-sale estimate of $1,000-$1,500. 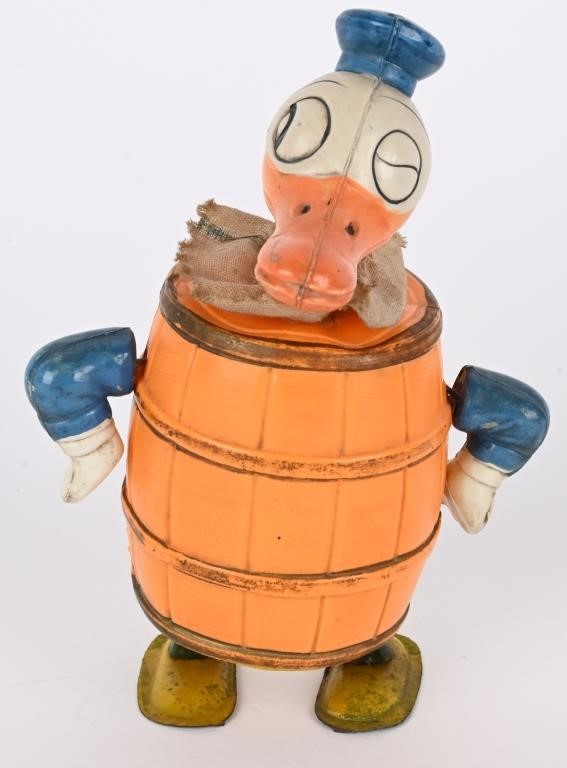 Collectors took full advantage of the unusual opportunity to bid on more than 20 Marx prototypes. An outstanding 1947 Marx hand-painted prototype Goofy the Goofy Driver tin windup krazy kar with a Donald Duck passenger figure sold for $4,440 against an estimate of $1,500-$2,000. A 6-piece Donald Duck Flyer train set hand-painted with Disney character scenes which was found in the Marx Erie, Pa., factory’s Research & Development room, retained a tag from the facility marked “152/6.” It swept past its $2,000-$3,000 estimate to reach $6,600. 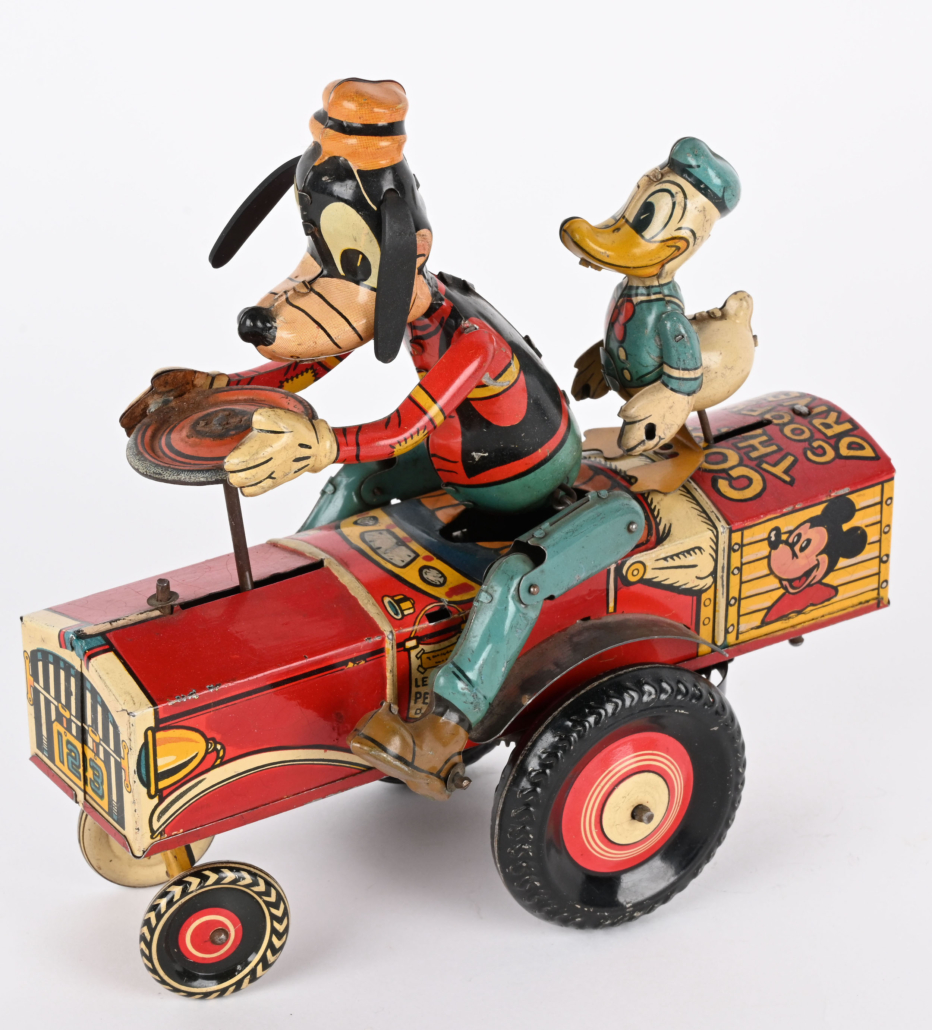 The undisputed leader of the prototype group was a 10-inch Moon Mullins Speedboy Delivery Motorcycle with a hand-painted Moon Mullins driver figure. It more than tripled its high estimate at $12,600. 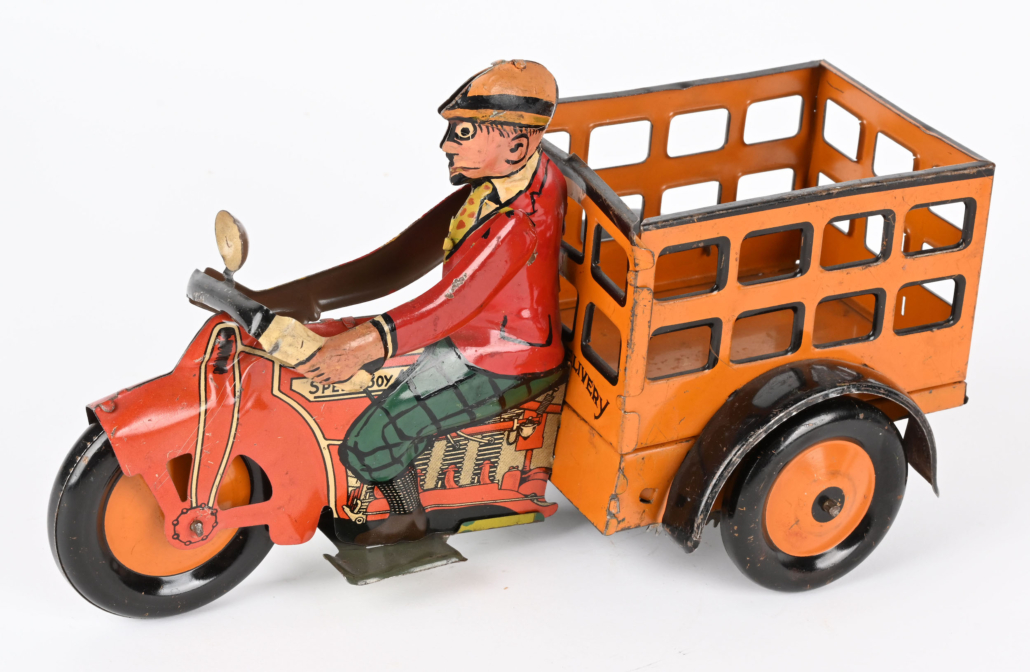 King and Sammet felt certain the outstanding collection of 150+ vintage toy boats and electric outboard motors would “make waves” because, as King explained, “Not many collections of this type are ever offered to the public. It was a 40-year collection of new/old store stock and everything was mint, boxed and unused, which is what those particular collectors look for.” Capturing the winner’s cup for its category, a rare 1959 Fleet Line Mercury Mark 78A outboard motor “drink mixer” with a Keikhaefer metal gas tank – both retaining their original individual boxes – more than doubled the lot’s high estimate to sell for $4,320. 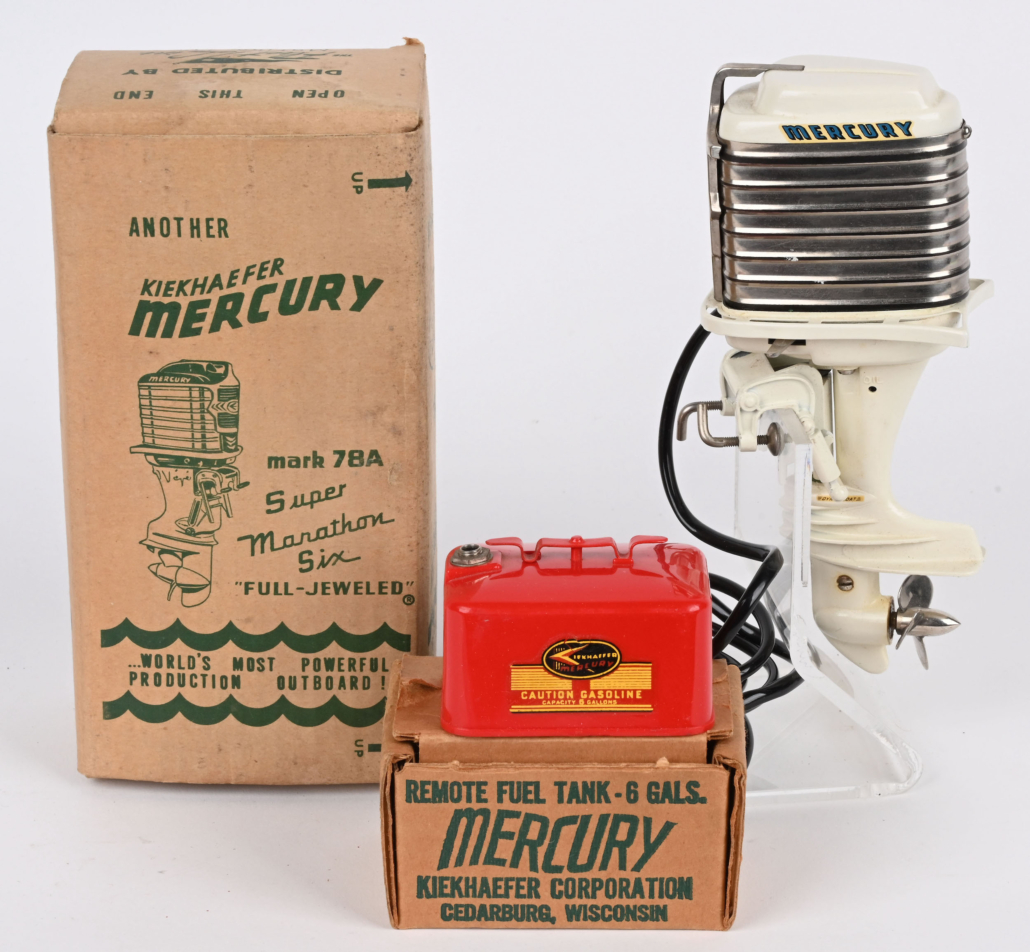 From a collection of 150+ lots of boxed vintage toy boats and electric outboard motors, all new/old stock, this rare 1959 Fleet Line Mercury Mark 78A outboard motor ‘drink mixer’ with Keikhaefer metal gas tank more than doubled the high estimate to sell for $4,320.

Summarizing the sale’s success, King said: “It was great to see such a high level of enthusiasm from bidders and consistently strong prices on toys of all types. It’s good for the hobby and brings back the feeling of optimism everyone felt decades ago, back in the ‘golden days’ of toy collecting.” 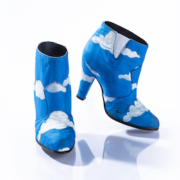 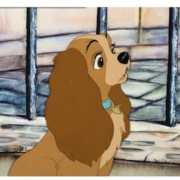 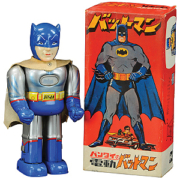 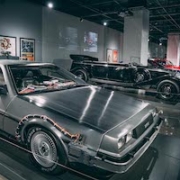 Back to the Future DeLorean, Ghostbusters cars on view at the Petersen 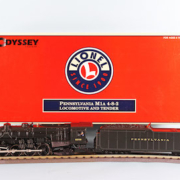 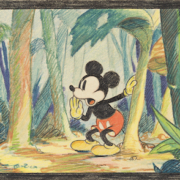