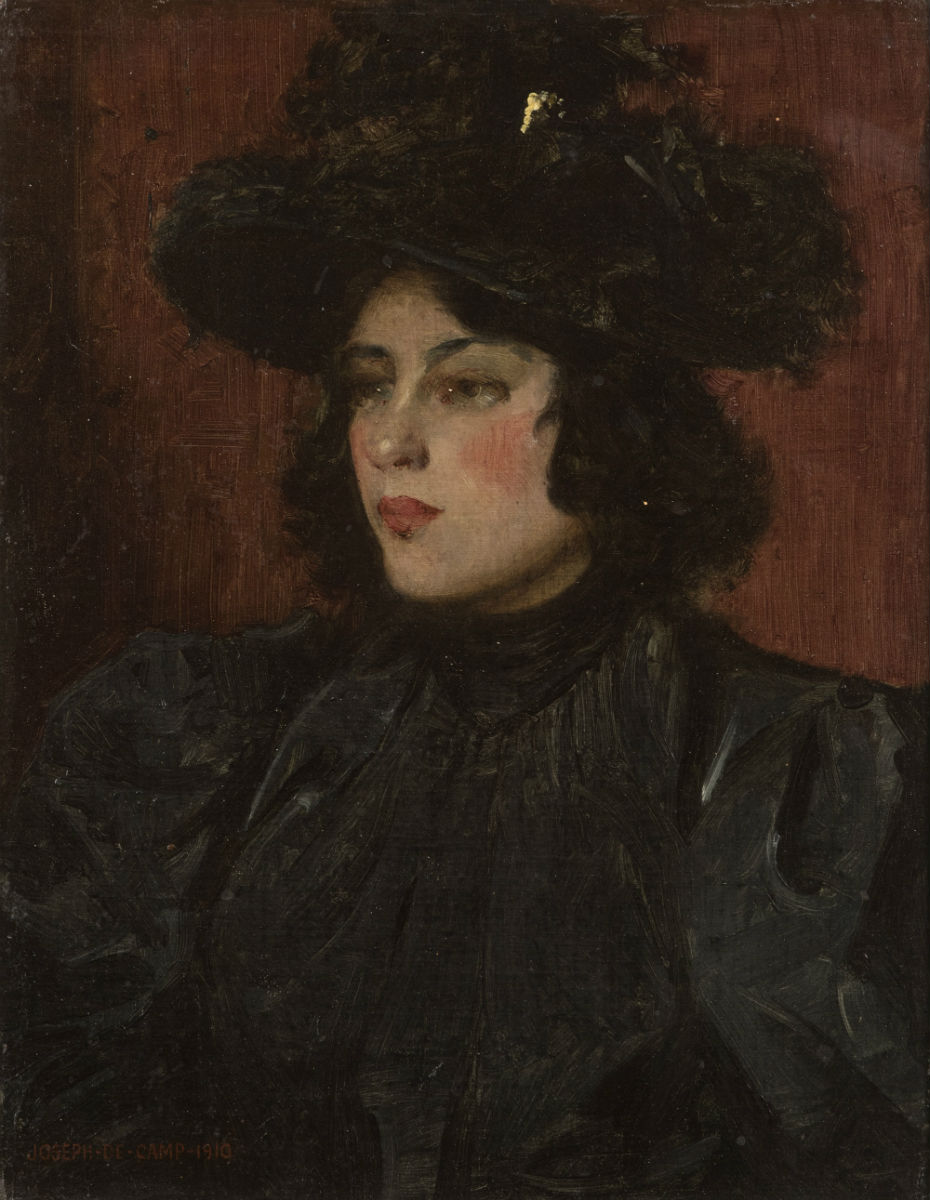 Boston portrait artist Joseph DeCamp was represented in the January catalog with ‘Lady in a Black Hat,’ which earned top-lot status with a $12,200 selling price (estimate: $3,000-$5,000). John Moran Auctioneers image

MONROVIA, Calif. – John Moran Auctioneers kicked off their 2017 auction calendar with an exciting auction event featuring an eclectic selection of 248 works of fine art, the majority of which carried estimates below $2,000. Many pieces featured in Moran’s Studio Fine Art Auction fell under the heading of California and American art for which Moran’s is known. Absentee and Internet live bidding was available through LiveAuctioneers.

The unexpected top-lot status went to Lady in a Black Hat, a solemn portrait by Boston painter Joseph DeCamp (1858-1923), which brought over twice the high estimate at $12,200 (prices realized include Moran’s buyer’s premiums).

While results for California and American art were respectable overall, a few other dark horse highlights came in the form of Modern and Contemporary works by European artists. Approximately 61 percent of lots overall were sold to remote buyers (casting bids via telephone, absentee or online).

No doubt owing to the strong showing of works offered throughout the catalog by talented American portraitists, select examples inspired competitive bidding throughout the evening. Early on, two works sold back-to-back handily outstripped their expected estimates; the first, a luminous portrait of a woman wearing a headscarf by Elmer Greene (1907-1964, Boston), was brought to the block with a $1,000 to $1,500 auction estimate, and brought $4,880 thanks to a tenacious telephone bidder. 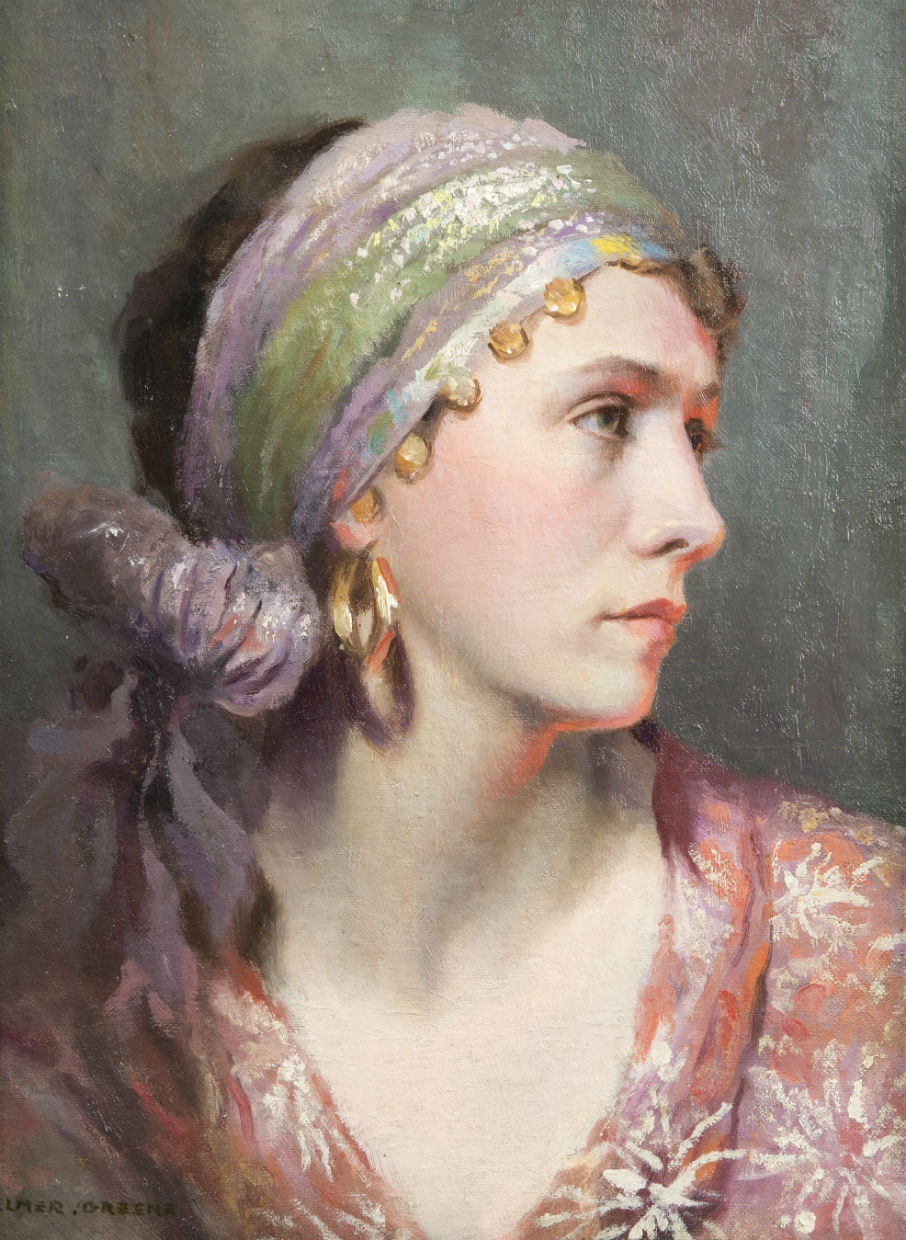 The second-highest earner of the evening was a black on white lithographic print by modernist Pablo Picasso (1881-1973, Spanish); Viva la Paix was expected to bring between $3,000 and $5,000 at the auction block, however five bidders signed up to bid on the lot via phone with others vying for the piece online, and the final selling price flew to $10,980 (below). 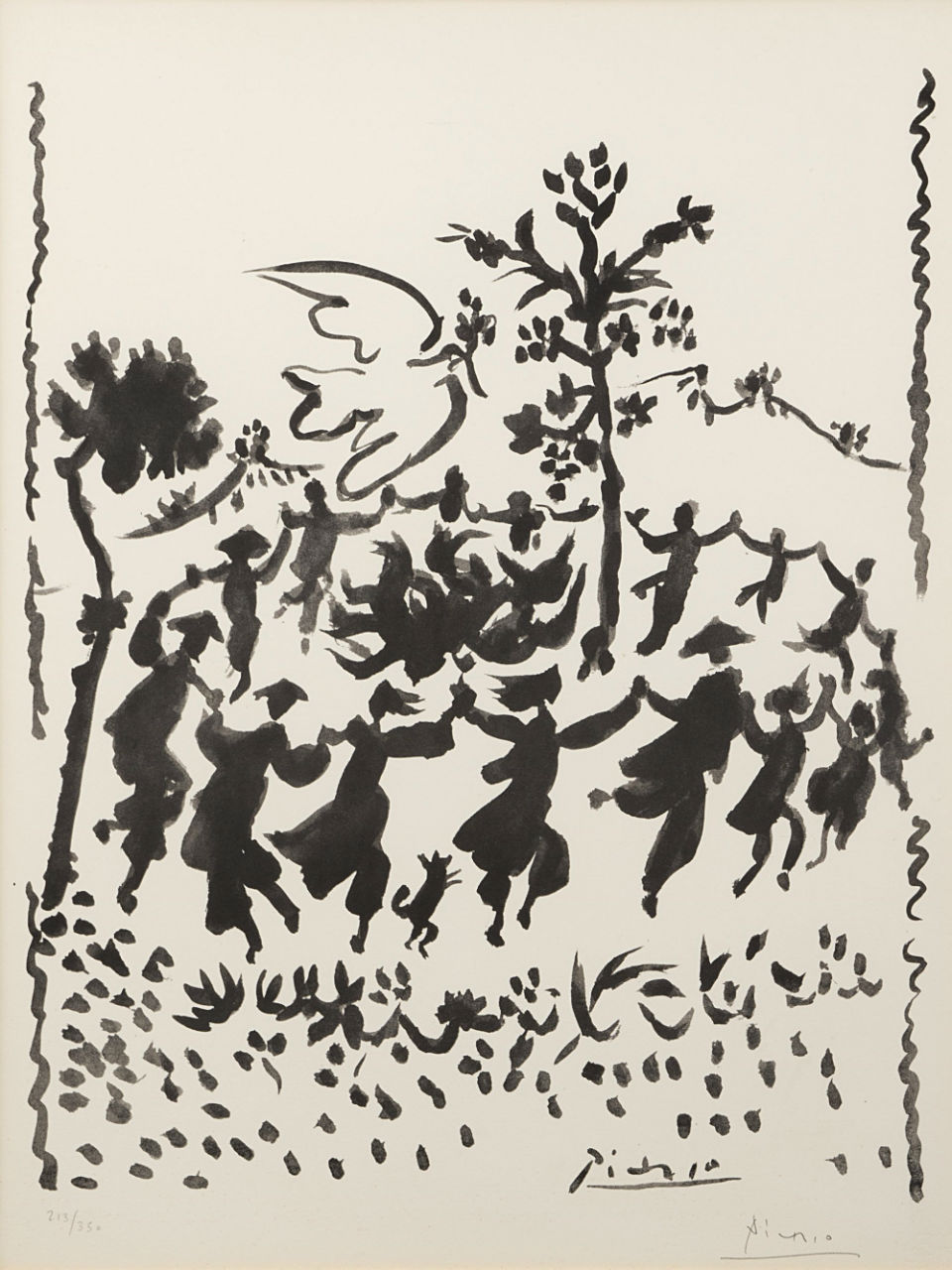 Works by Western American artists made up a considerable selection of the catalog, including an atmospheric desert landscape by Victor Higgins (1884-1949 Taos, N.M.). Consigned from the Goldfield collection, Higgins’s cloud-filled desert landscape hammered within estimate, bringing $4,575 (estimate: $3,000-$5,000). Providing a stark contrast to the Higgins landscape, Peter Ellenshaw’s (1913-2007 Santa Barbara, Calif.) view of the San Jacinto desert focuses on the dry, rocky ground and the native flowering shrubs therein. The painting sold for $4,270 (estimate: $2000-$3000). 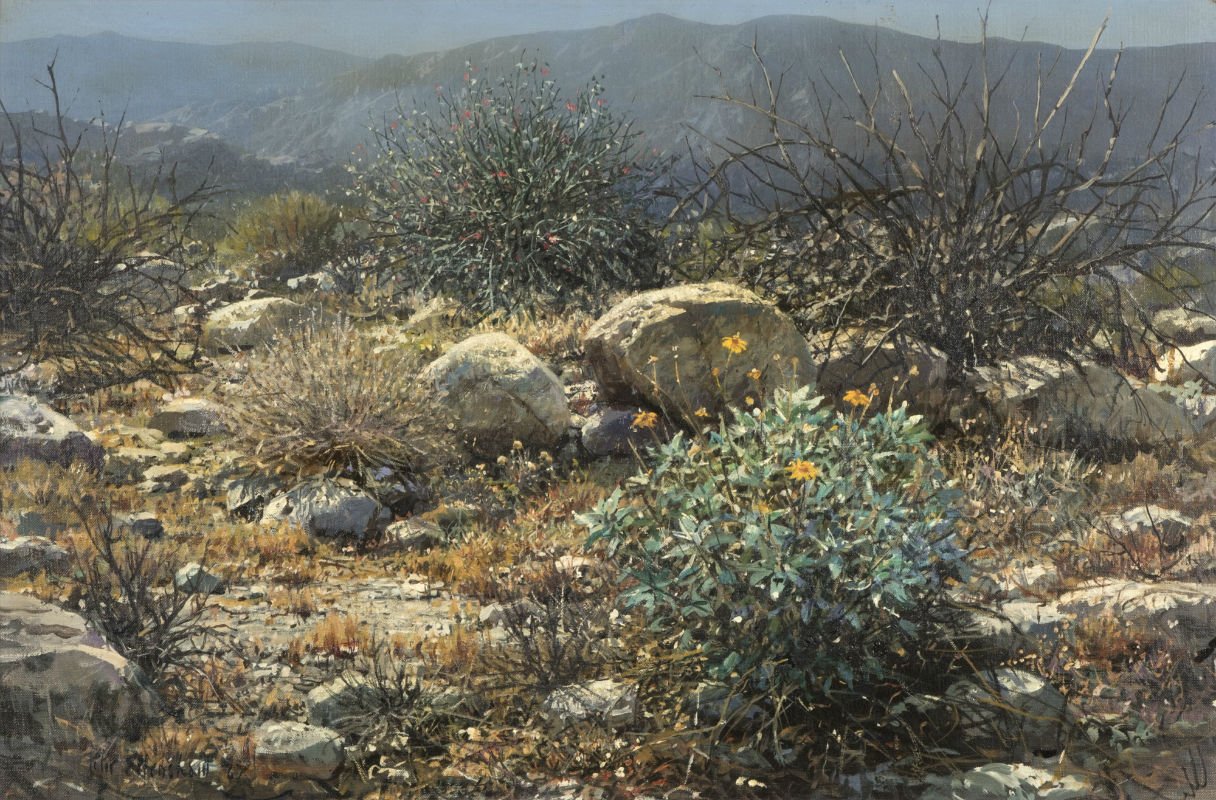 Portending good things for Moran’s March 21 California and American Fine Art Auction catalog, which includes a number of watercolor works by well-respected California artists thanks to the consignment of a large collection of paintings from watercolorist Gerald Brommer and his wife Georgia, a select number of watercolors went to the block at Moran’s January Studio Fine Art auction and achieved strong prices. Hailing from a private Santa Barbara collection, Mendocino Coves by Millard Owen Sheets N.A. (1907-1989 Gualala, Calif.), featuring a flock of speckled white and black seagulls gliding through the foreground of a scenic central California landscape, brought $6,710 (estimate: $3,000-$5,000).

The January Studio Fine Art Catalogue featured a small selection of Alaskan scenes which achieved strong prices across the board, including a charming oil painting by Jules B. Dahlager (1884-1952 Ketchikan, Alaska), titled Mt. Eccles, Cordova, Alaska). Consigned from a private Woodland Hills, Calif., collection, the work earned $3,050, just over the high estimate. 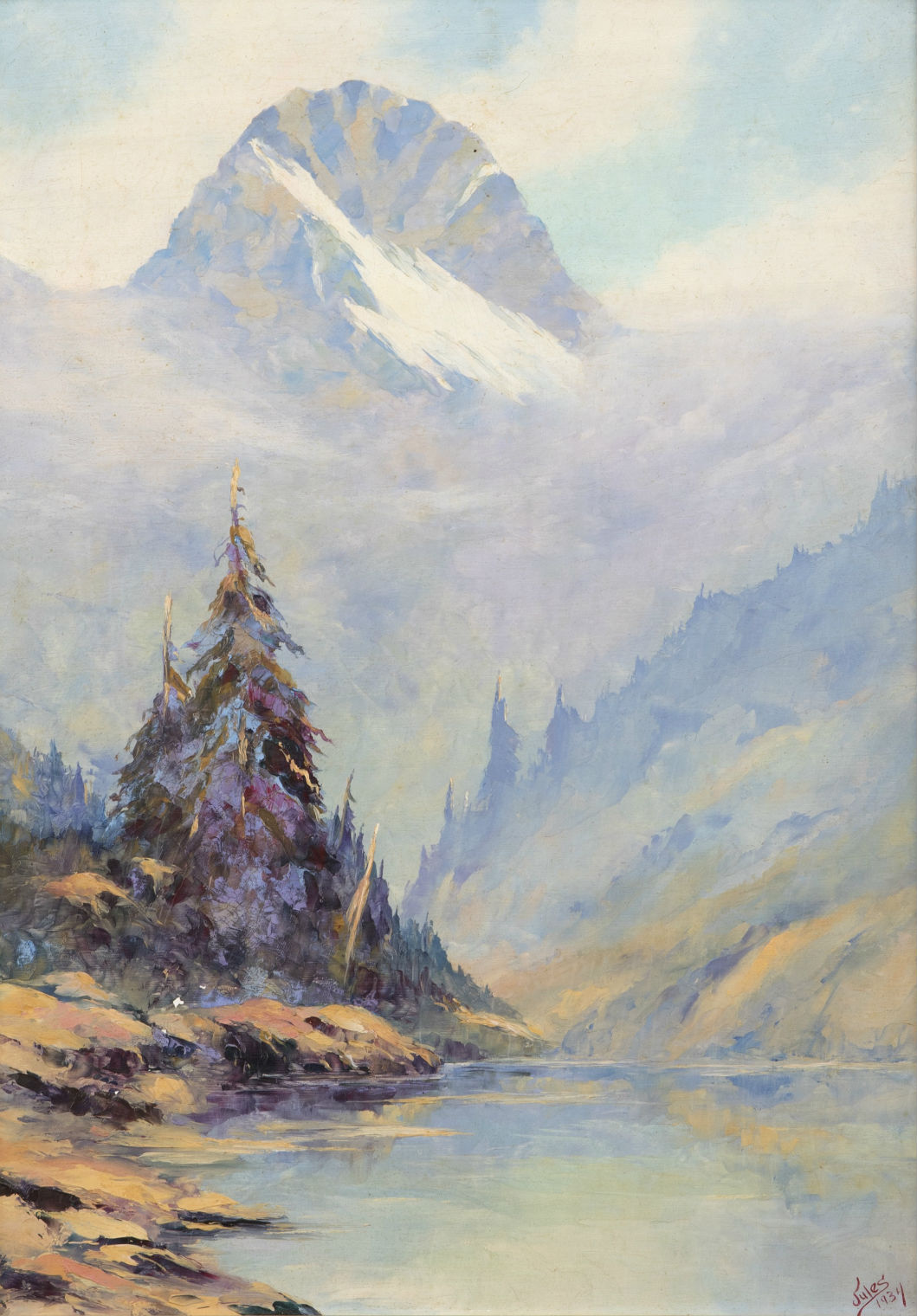 For details contact John Moran Auctioneers at 626-793-1833 or email: info@johnmoran.com.