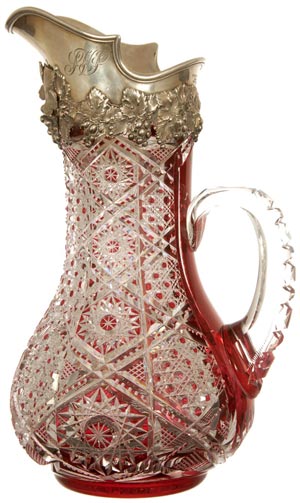 Topping the sale at $49,999 was this dark cranberry cut to clear tankard by Dorflinger in the fine no. 99 pattern. Image courtesy Woody Auction.

ST. CHARLES, Mo. – A rare dark cranberry cut to clear tankard by Dorflinger soared to $49,000 at an American Brilliant Cut Glass auction conducted Nov. 15 by Woody Auction. The tankard was cut in the fine no. 99 pattern and boasted a fine embossed vintage silver spout signed Tiffany & Co. with mark “C” for Charles C. Cook, president of Tiffany from 1902-1907.

Woody Auction of Douglass, Kan., conducted the auction, which included the collection of Dr. John Hall, a dedicated collector of ABCG. About 475 lots changed hands in a sale that grossed slightly less than $225,000. No buyer’s premium was charged.

“I know everybody is nervous about the economy right now, but this sale served as proof that high-end, quality items will still be desirable and do well, even in an uncertain time,” said Jason Woody of Woody Auction. “Most of the lots in this sale were outstanding pieces of American craftsmanship. This isn’t the first big ABCG auction we’ve held, and it won’t be the last.”

Woody said approximately 140 people packed the ballroom of the St. Charles Convention Center, while another 50 bidders participated online. About 35 absentee bids were recorded.

The Dorflinger tankard was by far the top lot of the sale. The piece had incredible color and an impeccable provenance. “It was one of the best colored pieces it has ever been my privilege to sell,” Woody said.

A rare matching pair of 15 1/4-inch pedestal cornucopia vases with large, 24-point hobstar bases, and perfect stems and fully notched tails went $20,000. The vases featured a nail-head diamond, strawberry diamond and fan motif. One of the pieces had a minor side chip on the rim, but that did not affect the tooth height and it didn’t dissuade bidders.

Bidding on a 15-inch round charger cut in the Panel pattern by Hawkes, with a nearly 3/4-inch-thick blank, reached $19,000. The item was received in shipment from overseas, where it had remained for the past 100 years. The original purchaser was pharmaceuticals magnate Sir Joseph Beecham.

A flawless 10-inch round tray signed Libbey in the rare Aztec pattern commanded $5,600.

Next came a tazza compote, 9 by 13 inches, in the Panel pattern by Hawkes and a huge 32-point hobstar scalloped base and sold stem, which sold for $4,500. A 23-inch table lamp by Meriden in the Florence Star pattern hit $4,100.

A beautiful set composed of a 14 3/4-inch round ice-cream tray with 12 matching 6-inch dishes, all well cut and resembling the work of J. Hoare, fetched $4,000. Also, a perfect 9-inch amber cut to clear covered ginger jar with a diamond cut body with three panels of engraved garland and floral urn design, probably cut by Hawkes on a Steuben blank, earned $3,500.

An 18-inch flared vase, signed Libbey, featuring an engraved heron standing in a marsh, rose to $3,500. The piece had been featured in the book Rarities by Wiener and Lipkowitz (page 271). An extra nice 14-inch Tuthill round tray in the Wild Rose pattern brought $3,900 and a pair of 9-inch signed Hawkes candle lusters in the Gladys pattern reached $3,250.

A two-part punch bowl set in the Heart pattern, with eight cups having hobstar, cane, strawberry diamond and fan highlights, climbed to $3,100. A 10 1/2-inch water pitcher in the Alhambra pattern by Meriden, with 10 tumblers, clear blank and hobstar bases, went for $3,100. A two-part punch bowl set cut with a hobstar, strawberry diamond, nail-head diamond and fan motif realized $2,200.

A 22-inch corset-shape vase topped out at $1,600 despite a minor tooth chip. The large vase featured a large pinwheel with hobstar and Harvard highlights and a Ray base. An 11-inch decanter in the Quatrefoil and Rosettes pattern, with hobstar base, well cut, chalked up $1,350. A nice 18-inch single-bulb mushroom shade table lamp with hobstar, strawberry diamond and fan motif, made $1,300.

A rare 6-inch green cut to clear handled nappy in the Marlboro pattern by Dorflinger sailed to $1,300. A corset-shape, three-handle loving cup with strawberry diamond, star and fan motif and hobstar base, and a wide sterling rim with monogram “AEM,” dated 1903, garnered $1,400. A pair of 10 1/2-inch decanters in the Middlesex pattern by Dorflinger, with hobstar stoppers, made $1,400.

Having an extra-thick blank, a signed Hawkes flower center in the Gladys pattern made $1,200. A boudoir lamp with flashed hobstar and engraved floral shade, set on a Vesica and fan base, brought $1,200. An 8-inch cranberry cut to clear water carafe in the Harvard pattern by Libbey attained $1,500. A pair of cranberry cut to clear wine glasses in pattern no. 50 by Dorflinger made $1,100. 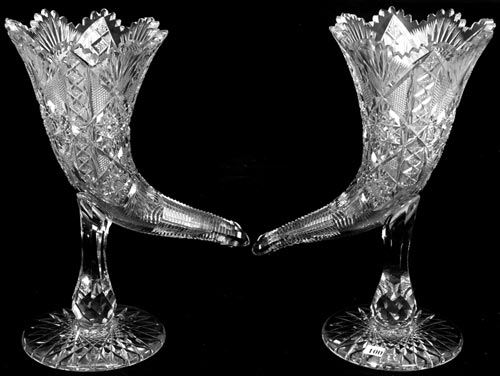 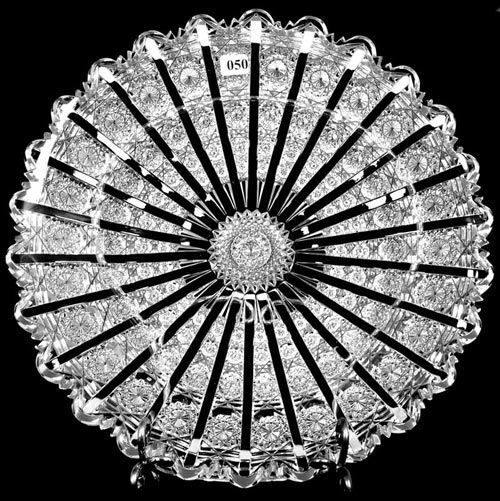 Bidding reached $19,000 on this Hawkes 15-inch charger in the Panel pattern. The blank used to create it was nearly three-quarters of an inch thick. Image courtesy Woody Auction. 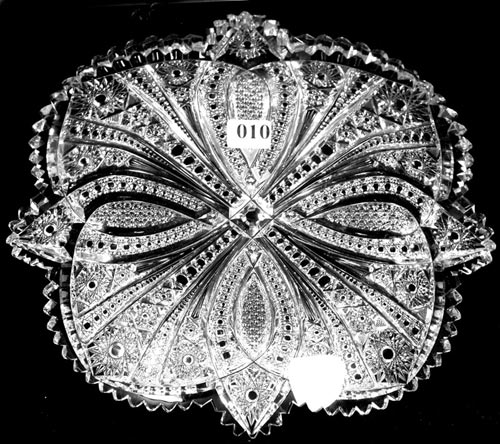 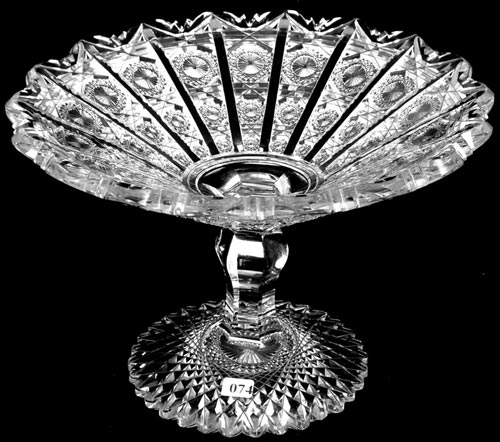 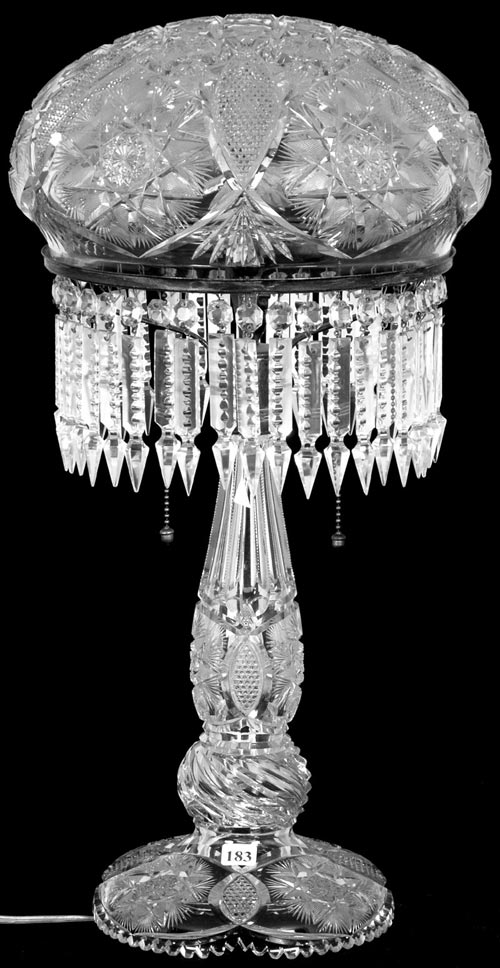