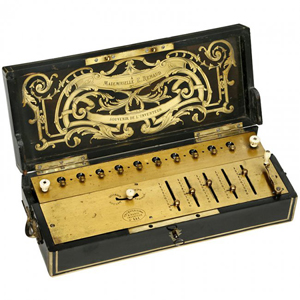 COLOGNE, Germany – As clothes are said to make the man, so in the world of auctions and antiques, an exceptional housing or original box can sometimes influence the price of an item exponentially. Such was the case at Auction Team Breker’s marathon 900-lot auction of antique toys and technology in which an example of the world’s first commercially made calculator, Thomas de Colmar’s Arithmomètre (lot 8), sold to a private French collector for 233,600 euros ($313,000).

Not only is the Arithmomètre a milestone in its own right, but this 1835 example was housed in a luxuriously appointed boulle case engraved as a “Souvenir de l’Inventeur” to de Colmar’s sister-in-law, Emilie Charlotte Reynaud de Barbarin.

From calculators to computers, a 1976 Apple I – the first ready to use PC in the world to offer monitor and keyboard access – was bought for nearly 246,000 euros ($330,000) by another collector from overseas (lot 22). In addition to an original monitor, software and peripherals in near-mint condition, the motherboard also retained its original cardboard shipping box that had been signed and authenticated by Apple co-founder Steve Wozniak.

Another landmark was the first officially named Mac computer, a rare surviving prototype of the unsuccessful “Twiggy Mac” series from 1983 (lot 19), which fetched 30,750 euros ($41,200).

Continuing the trend of top prices for pieces in superb original condition was a single-owner collection of scientific instruments whose strength was 19th century surveying apparatus. Two German transit theodolites, both with well-preserved original lacquer, by Hildebrand of Freiburg (lot 213) and Sartorius of Göttingen (lot 252) garnered particular interest, selling for many times their estimates at 8,000 euros ($10,800) each.

Casework also proved important for mechanical music instruments, which ranged in size from the mighty – a Frati & Co. pneumatic orchestrion with the vocal capacity of a small band (lot 366) for 8,000 euros ($10,800) – to the miniature, a gem-set necessaire formed as a grand piano by Russian silversmith Konstantin Egorovitch Knyasev (lot 421) for 30,750 euros ($41,500).

Two French automata with an Oriental inspiration proved especially popular. The first, an early and intricate piece for the Chinese market, depicting three artisans and a musician at work in the forecourt of a stately building, fetched 18,500 euros ($25,000) (lot 431). The second was a large and elaborate electric advertising automaton titled “The Mysterious Illusion” (lot 436), whose Mandarin magician and elusive assistant had originally entertained passers-by from the windows of Midwestern businesses during the 1930s. The publicity piece, which was accompanied by period testimonials and photographs from the shops which leased it, fetched 36,900 euros ($49,800). An automaton with a contemporary American theme was the 2013 “Portrait of Obama” by Christian Bailly (lot 438), which sold to an online bidder from the U.S. for 27,800 euros ($37,500).

As with the instruments, original boxes add a special cache for toy collectors and can mean the difference between an average and an exceptional price. Auction Team Breker’s sale featured a fine private collection of about 400 antique tin toys which included the work of German makers Bing, Lehmann, Carette and Marklin as well as classic Japanese makers of the 1950s and ’60s. In the first category were favorites such as Lehmann’s Masuyama Rickshaw (lot 574) for 4,300 euros ($5,800), Bing’s largest limousine (lot 629) for 11,000 euros ($15,000) and a Marklin horse-drawn coupe (lot 560) for 6,400 euros ($8,600), while among the second were elegant automobiles like ATC’s Buick (lot 687) for 5,000 euros ($6,750), mostly in pristine condition and many in their original boxes.

Aeronautical transport was represented by a selection of early biplanes, gliders and airships, including a Wright-pattern Aerona (lot 530) which floated to a new home in a significant German toy museum for 6,600 euros ($8,900). With its roots planted firmly on the ground was a rare Marklin tree stump monkey bank – illustrated in the maker’s 1910 catalog but previously unknown – (lot 846) for 6,900 euros ($9,300). Creating interest among collectors in several categories, a Tipp & Co. Calculating Boy (lot 3) brought a surprisingly high 6,750 euros ($9,100), a new record price for this piece. 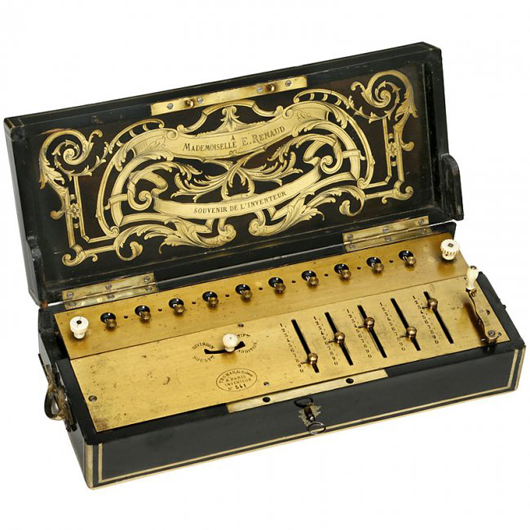 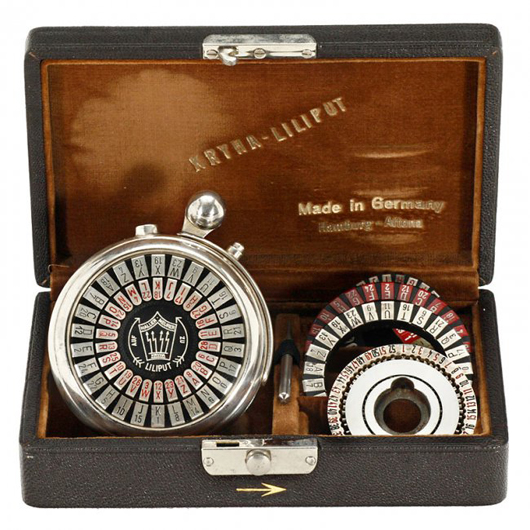 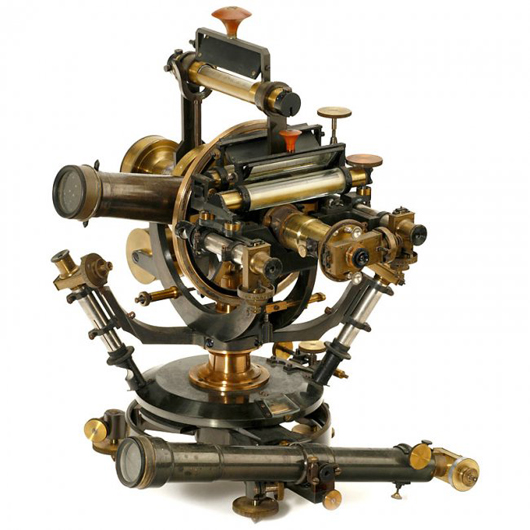 German transit theodolite by Hildebrand of Freiburg sold for many times its estimate at 8,000 euros ($10,800). Auction Team Breker image. 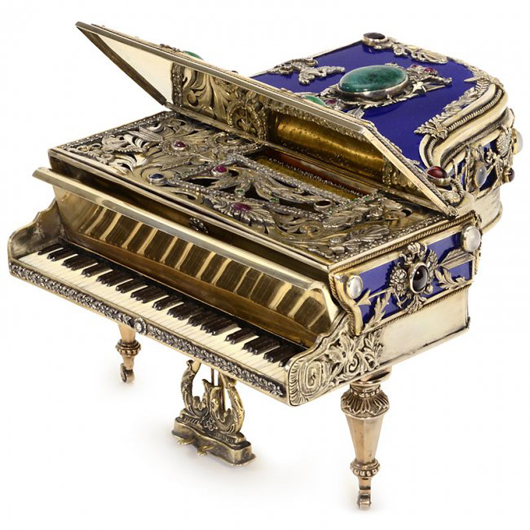 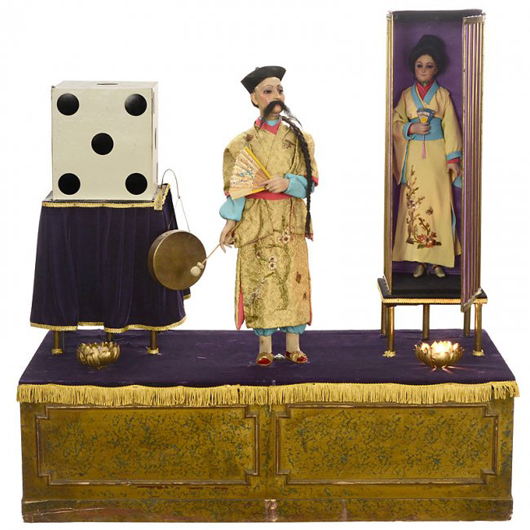 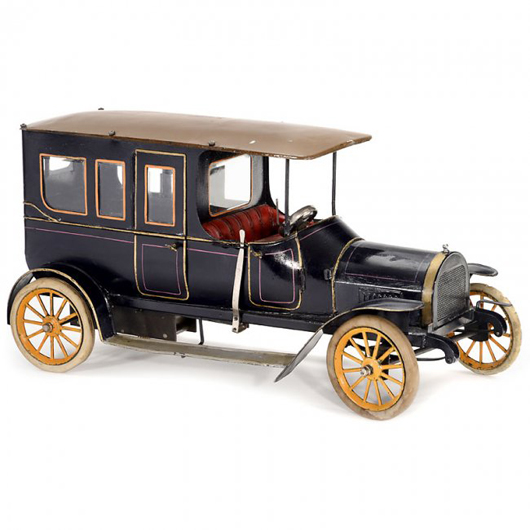 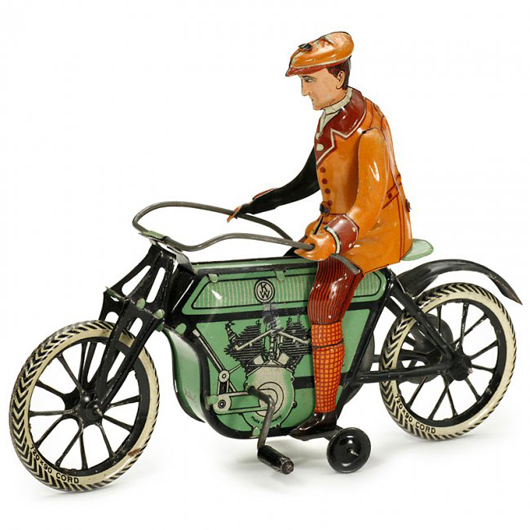 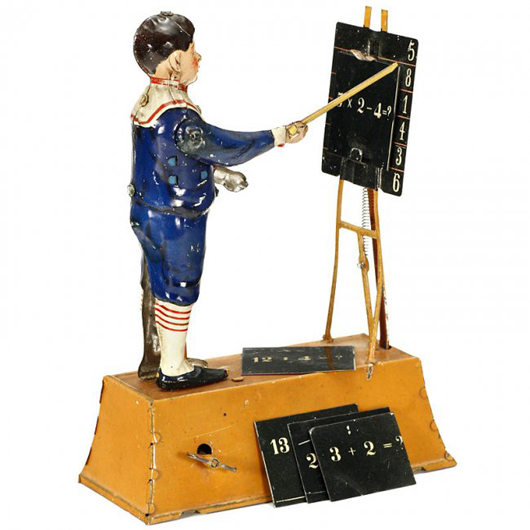