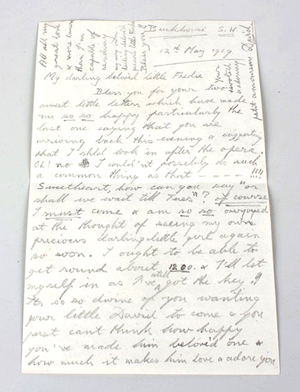 Edward, Prince of Wales wrote this letter to Fred Dudley Ward, wife of a Liberal MP, in 1919. Image courtesy of Fellows.

BIRMINGHAM, England – On Nov. 25 a rare love letter from Edward, Prince of Wales was auctioned off at Fellows for £6,324 ($10,390), inclusive of the buyer’s premium, after being estimated to sell between £1,200-£1,800. The letter, which received a flurry of bids, was written in 1919 to lover Freda Dudley Ward. LiveAuctioneers.com provided Internet live bidding.

The letter contains Edward’s passionate response to his lover’s request to meet at midnight for a secret rendezvous after the opera. Edward, the only king to abdicate from the throne, pines that he is “so so overjoyed at the thought of seeing my own precious little darling girl again so soon. I ought to be able to get round about 12.00 and I’ll let myself in as I’ve still got the key!” and refers to his lover as his “darling beloved little Fredie.”

The letter was recovered from the estate of an antiques collector in Birmingham. Mark Huddleston, senior antique and fine art specialist comments, “not surprisingly, the letter has caused quite a stir since we first found it. It is a fascinating piece of royal history that makes for quite cringe-worthy reading, as it appears David has little self-censorship when writing it.”

Known for her intelligence and discretion, Freda Dudley Ward was also the wife of a Liberal member of Parli, who apparently turned a blind eye to the affair. Sir Winston Churchill is quoted as saying that it “was quite pathetic to see the prince with Freda. His love is so obvious and undisguisable.” 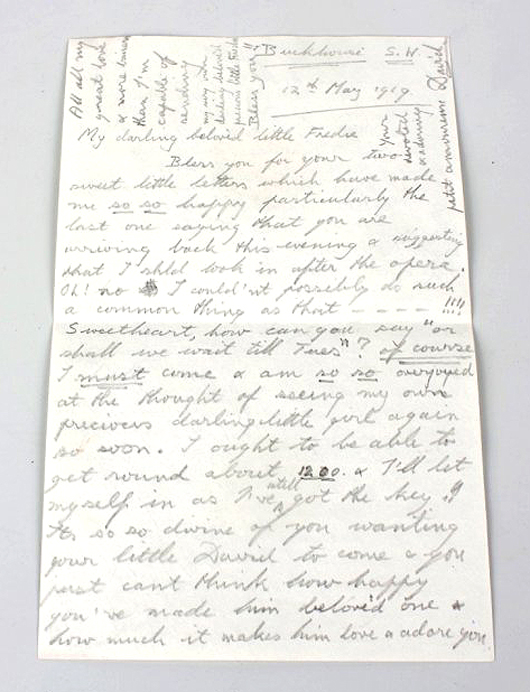 Edward, Prince of Wales wrote this letter to Fred Dudley Ward, wife of a Liberal MP, in 1919. Image courtesy of Fellows.