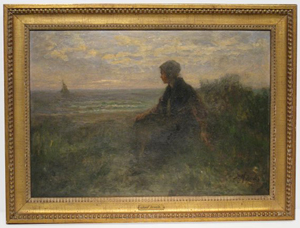 MALVERN, Pa. – An original oil-on-board painting of a lone woman by the sea, done by the renowned Dutch artist Josef Israels (1824-1911), sold for $20,700 at a multi-estate sale held Apr. 25 by Gordon S. Converse & Co. Titled Watching and Waiting, the artwork measuring 26 inches by 19 inches finished as the top lot of the 300 items offered. All prices quoted are inclusive of a 15% buyer’s premium.
The April sale was the third auction to be produced by the fledgling auction house, but it was a good one, loaded with vintage clocks, period furniture, estate silver, collectible books, fine art and more. And it was the last auction to be held in the firm’s Malvern facility, which it quickly outgrew. Future auctions will be held somewhere in nearby Wayne, Pa. (also a Main Line suburb of Philadelphia), at a yet to be determined location.

“The Malvern gallery served our purposes to help us get started, but already it’s time to move up to the next level,” said owner Gordon S. Converse, adding, “We don’t want to take just any space that’s larger. It has to be suitable for our needs and comfortable for bidders. The site selection process is under way now, and I’m confident we’ll be in a new facility in time for our next sale, in September or October.”

Converse said the April auction grossed more than either of the two that preceded it, making it his best sale yet. “The in-house crowd was as usual,” he said, “but I was particularly impressed with the amount of activity online through LiveAuctioneers.com. We had around 100 registered bidders, with about 20 percent of all sold lots selling online.” Phone and write-in bids were also active, he said.

“We’ve got our hooks in this business and we’re going to keep going, despite what is undeniably a sour economy,” Converse continued. “The fact that every sale has outperformed the one before it is hugely encouraging, and I attribute that to some pretty wonderful fresh to the market consignments from prominent local estates. We’re aggressively gathering more quality items now, for our fall event.”

Following are additional highlights from the April auction:

· Vintage clocks were served up in abundance. A fine porcelain paneled gold gilt Swiss carriage clock, made in the late 19th century for Samuel Chew (1722-1810, a signer of the Declaration of Independence and a British sympathizer) of “Cliveden” (Philadelphia), by the Droucourt Co., brought $4,312. Also, a carriage or travel timepiece, French in origin and seven inches tall, sold for $4,140.

· A three-weight “Grande Sonnerie” German-made wall clock, attributed to Gustav Becker and featuring engraved weights, pendulum and round dial, and a carved walnut case (about 50 inches tall) chimed on time for $1,840; and a battery/electric clock case in a four-glass mahogany case, made by the Eureka Clock Company (circa 1909-1914, 12 inches tall, Serial # 5718) changed hands for $1,035.

· A restored early 19th century American Federal pillar-and-scroll shelf clock with reverse painted glass below a square wood dial and with a mahogany case rose to $690; an Atmos clock, powered in “perpetual motion” by slight changes in temperature (Serial # 74143, 8-3/4 inches tall), garnered $288; and a 19th-century Chinese bracket clock in a rosewood and Nacre inlay case hit the mark for $259.

· From the period furniture category, a fine Federal solid-cherry high chest (circa 1800, possibly Delaware Valley in origin), with two drawers over five graduated size drawers, went for $2,012; a nice Hepplewhite chest (circa 1815), probably from the workshops of Michael Alison (N.Y., 1800-1845), achieved $1,725; and a cut glass, enamel and gilt jewelry chest (8 inches by 8 inches) attained $633.

· A fine Regency or George III sterling silver tea or coffee urn, 22 inches tall and weighing 80 ounces, hallmarked and with an engraved monogram, climbed to $1,955; a Theodore Haviland Limoges dinnerware set, over 100 pieces, commanded $690; a 12-inch enamel charger with dragons, birds, butterflies and dogwoods blooming made $403; and a set of World War II posters hit $144. 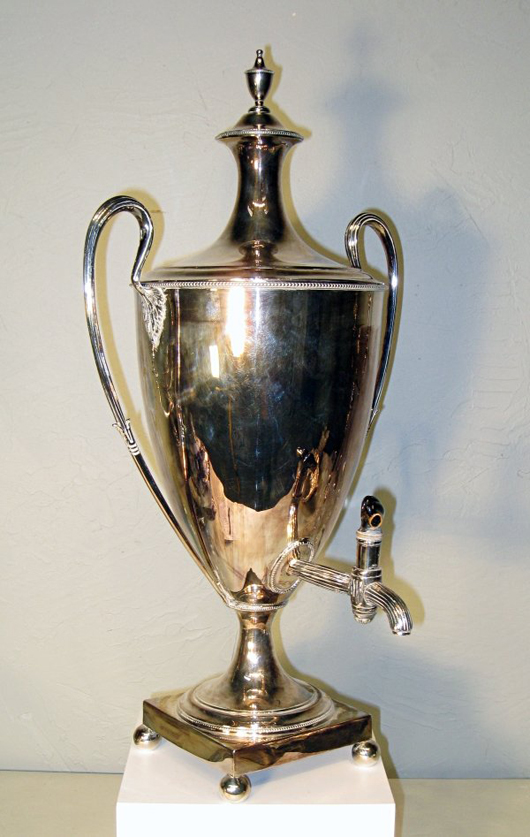 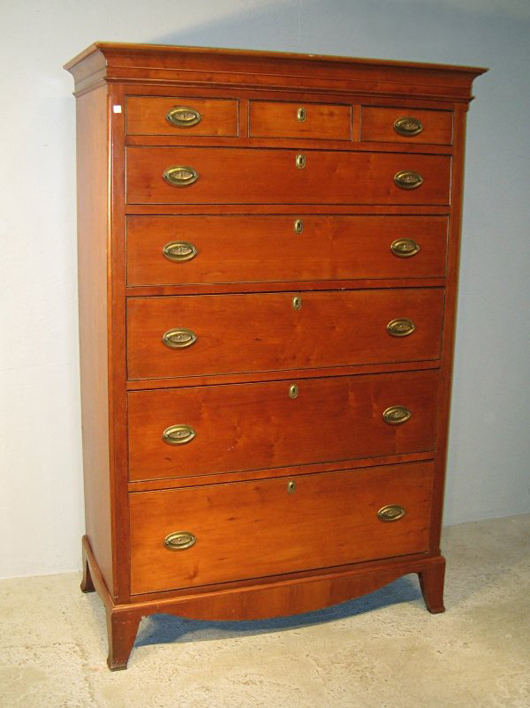 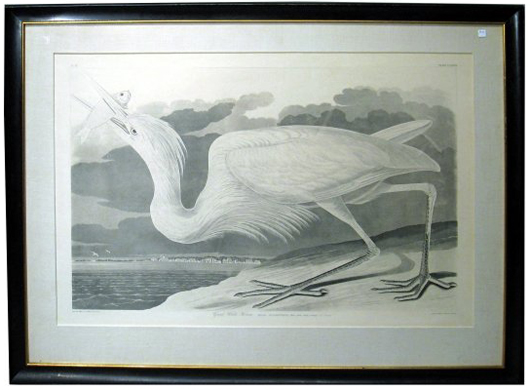 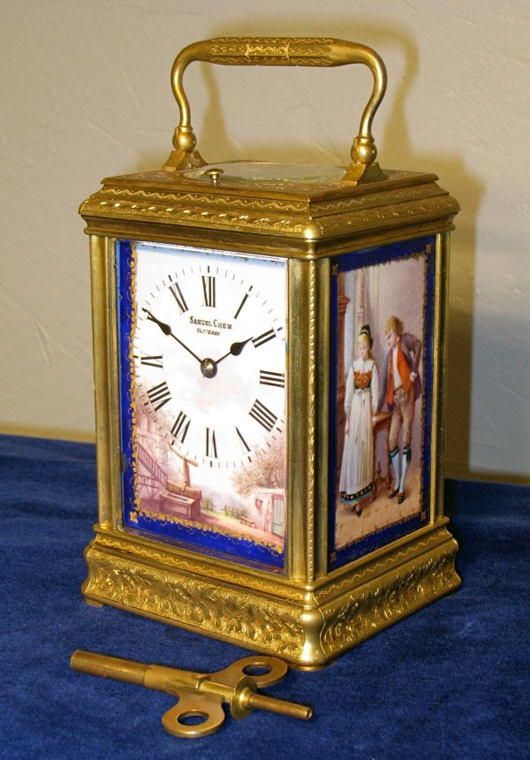 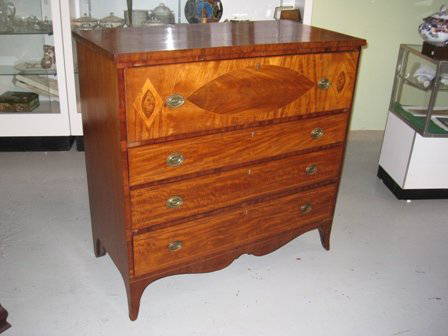