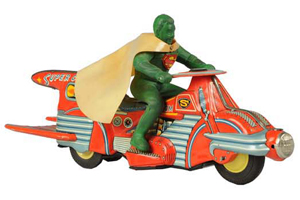 DENVER, Pa. – An exceptional boxed example of a Bandai 12-inch “Flying Spaceman” took a wild ride on February 15th at Morphy’s before settling at $55,200 – more than three times its high estimate. Described in the Toy Auction catalog as being “possibly the best known example,” the crisp and colorful Japanese tin-litho motorcycle toy features a vinyl-caped hard-rubber “Superman” rider with a large tin “S” insignia on its chest.

“This particular toy was new/old stock with its original box and was found in a toy store in Japan. It’s very uncommon to find a Flying Spaceman in such nice condition, especially with the Superman shield still intact,” said Morphy Auctions’ owner, Dan Morphy. “There was a lot of interest in the toy prior to our sale, and it didn’t surprise me that it went for as much money as it did.”

Robots and space toys were strong across the board, Morphy said, with interest from around the world. “I’ve never seen online bidding as active as it was for this sale. From start to finish, there were at least 300 bidders on the Internet at any given time.” The auction grossed $996,000 (all prices quoted in this report are inclusive of 20% buyer’s premium). LiveAuctioneers provided the Internet live-bidding services for the sale.


Although only 8 inches in height, a beautiful Kanto tin wind-up “Television Robot” was the object of fierce bidding competition and commanded a price that one might expect of a rare and imposing Gang of Five robot. Together with its richly illustrated factory box, the near-mint extraterrestrial had been entered in the sale with a $15,000-$25,000 estimate. Collectors chased the fine example to $32,400.

A 6-inch Ohio Art sand pail charmed bidders with its early, colorful lithographed image of Minnie Mouse paddling a canoe, along with companions Mickey Mouse and Pluto. Estimated at a modest $200-$400, it outperformed all other Disney toys in reaching a final bid of $4,200.

Cast-iron mechanical banks were in high demand, with a near-mint-plus example of an Artillery Target bank, complete with cannonballs, at the forefront. Although the manufacturer of this particular bank is not known, its designer was Samuel Clark of Brooklyn, New York, and its patent dates to 1877. Against an estimate of $18,000-$25,000, it hit the bull’s-eye at $51,600.

Following closely behind was an 1878 J. & E. Stevens Patronize the Blind Man and His Dog bank. One of the nicest of all known examples, it more than doubled its high estimate to realize $50,400.

“I was very pleased with the results,” said Morphy’s owner, Dan Morphy. “There was an atmosphere of enthusiasm throughout the sale, and many new bidders took part from around the world. Ask any auctioneer and they’ll tell you there’s nothing like new blood to liven up a market. If this sale is any indication of what’s to come, 2014 is going to be a very exciting year for us and for the toy hobby.” 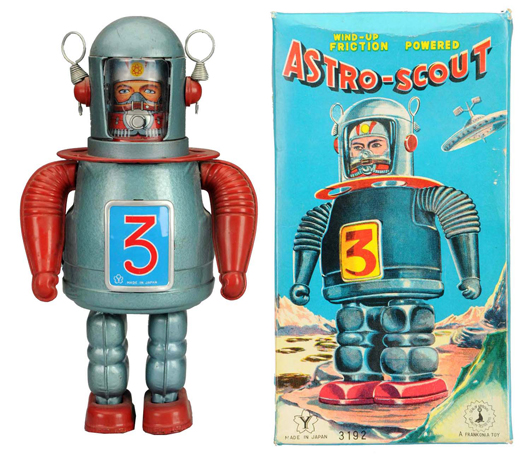 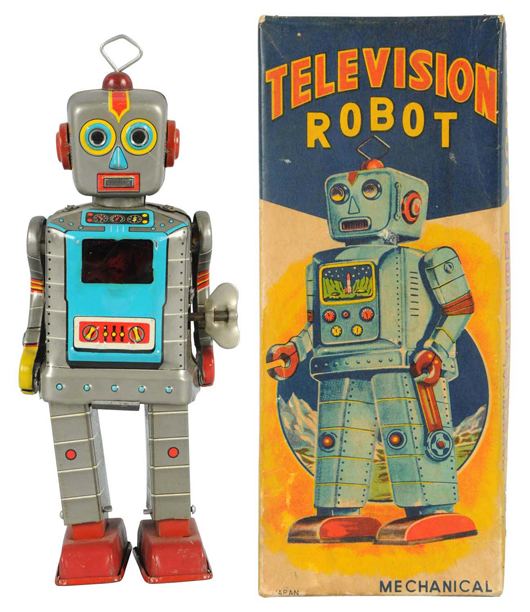 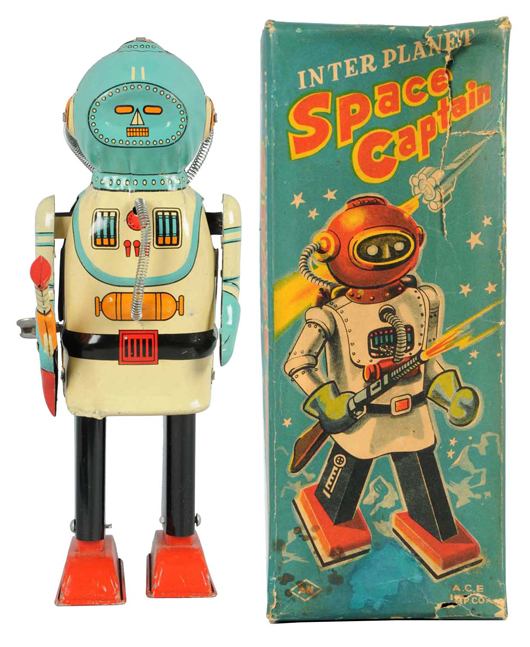 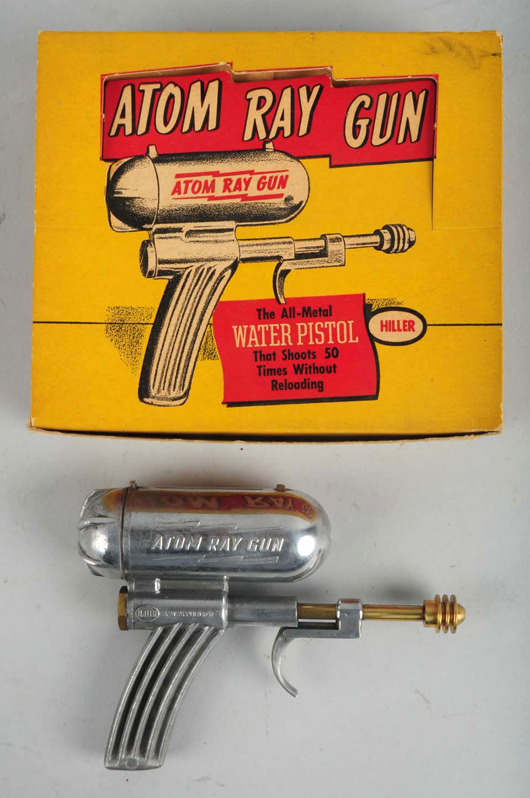 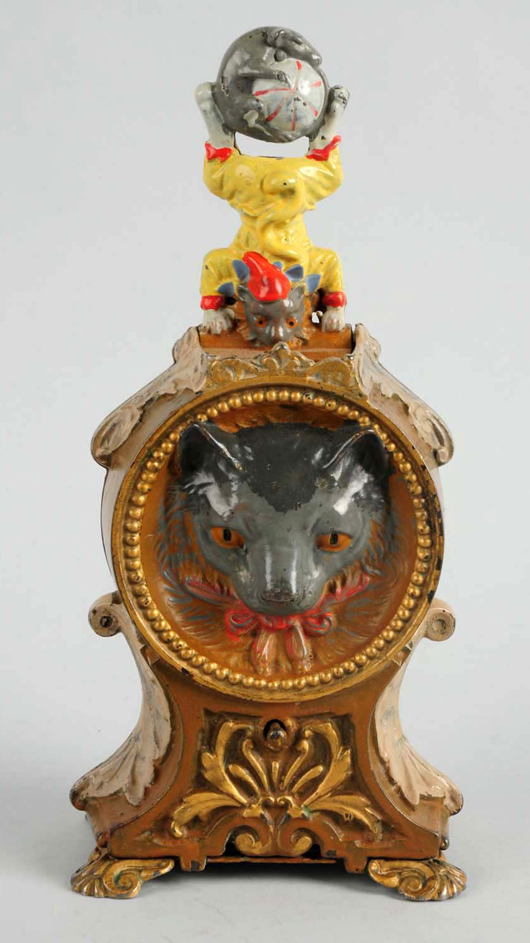 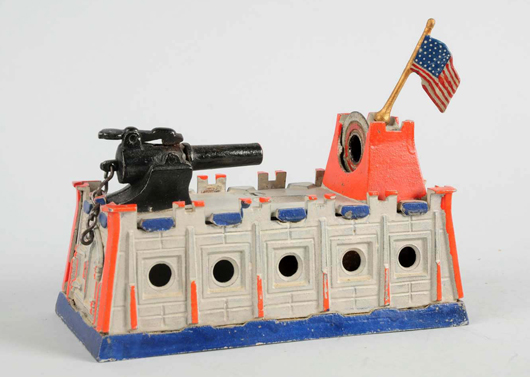 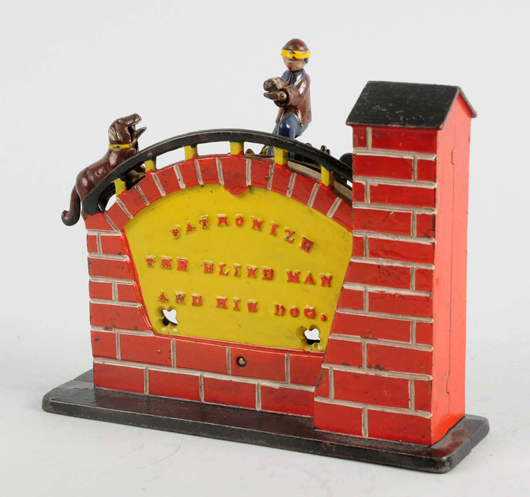 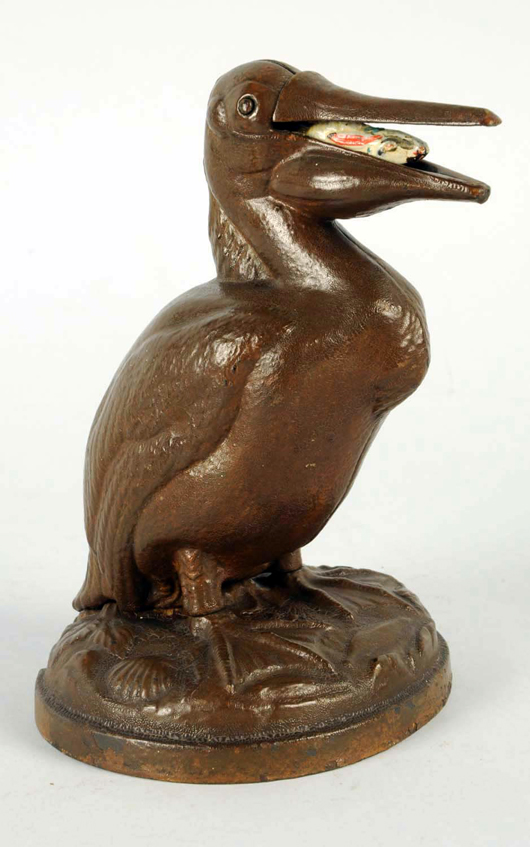