It was a new world auction record for an E. Howard clock, no small feat considering E. Howard clocks are among the most desired in the world by collectors and horologists alike. The clock featured a 16-inch reverse-painted glass astronomical dial with Arabic five-minute numbers in the chapter ring and sub-hour dial with Roman numerals, signed E. Howard & Co. It also had a clean running movement and a 126-inch-high walnut case. Other pluses included a high-quality, eight-day, brass weight-driven time-only movement (also signed E. Howard & Co.), Graham deadbeat escapement with jeweled pallets, solid brass pulleys, top-quality brass weight and four jar mercurial pendulum, a gorgeous case with carved crest, an arched center with figural pediment bust of a woman, and large base with burled panels.

When the auction was over, a $1.4 million gross had been tallied.

“It was a great auction, with better clocks being especially strong,” said John Fontaine. “Some people traveled great distances to bid on one clock. The E. Howard, of course, was the star lot. It was an amazing clock with the original finish. And it had been in the same family for over 100 years. Talk about provenance.”

Following are additional highlights from the clocks session. All prices quoted include an 18 percent buyer’s premium.

One other clock topped the $100,000 mark. It was a monumental, 12-foot-tall Richard Whittington grandfather clock with heavily carved oak case and 3-foot-tall putti at the base, around a central medallion of Sir William Whittington Knight. The clock, dated 1793, sold for $118,000. The main door had a carving of young Whittington with a cat chasing mice at his fee. A rare Seth Thomas No. 10 regulator with a 14-inch heavy brass dial, silvered face, black Roman hour numerals, original blued spade hands, sweep seconds hand, and a massive walnut case with carved crest and base brought $53,100; and a grandfather clock with movement by Tiffany & Co., and case by Herter Bros., in excellent condition with original finish, hit $38,350.

A circa-1890 French industrial steam clock and barometer with large central cylinder and piston with a vertical connecting rod powering the flywheel, original deep brown patina and on a rouge marble base, garnered $25,960; and a French figural “Three Graces” – represented by nude female figures – annular clock with white marble base with fluted pedestal and original dore finish made $12,980.

A five-bird automaton clock with French movement, signed Japy Freres, showing five birds perched in a tree, three of the birds animated and a spiral spinning glass rod at the bottom simulating running water, rose to $12,980; and a Parkinson & Frodsham mahogany grandfather clock, 93 inches tall, in beautiful condition and with the original finish, topped out at $10,620.

Following are highlights from the second session, which featured antiques, furniture and a few more clocks. All prices quoted include an 18 percent buyer’s premium.

Another Tiffany table lamp that sold well was a Colonial lamp with 16-inch Domical shade having four rows with large panels of green striated glass, on a rare bronze Tiffany lamp base, 20 inches tall made $11,800. The same amount was realized for a rosewood carved cherub half tester bed having a massive headboard with double burled panels and original finish, 118 inches tall.

A quartersawn oak Waterbury hall tree clock with a lift-top seat, wavy arms and legs, leaf carvings and scrolling back frame with beveled mirrors and figural coat hooks, 87 inches tall, rose to $12,980 and a mahogany winged griffin hall rack with an arched crest with swirling carved leaf and rosettes, beveled mirror in the back and six large brass coat hooks made $11,210.

A circa-1850 rosewood rococo elaborately carved cabinet base etagere, attributed to Bembe & Kimball, with fruit carved legs, floral carvings on the front and floral and scrolled carved mirrored top climbed to $11,210; and a Galle cameo and bronze lion table lamp with bronze base by Frederich Gornik (Austrian, 1895-1925), 25 inches tall, also went for $11,210.

Fontaine’s Auction Gallery is actively seeking quality consignments. The firm also buys antiques and entire estates outright. To consign an item, estate or collection, call 413-448-8922 and ask for John Fontaine; or, e-mail him at info@fontaineauction.com. For more information about the upcoming auctions, please log on to www.FontainesAuction.net. 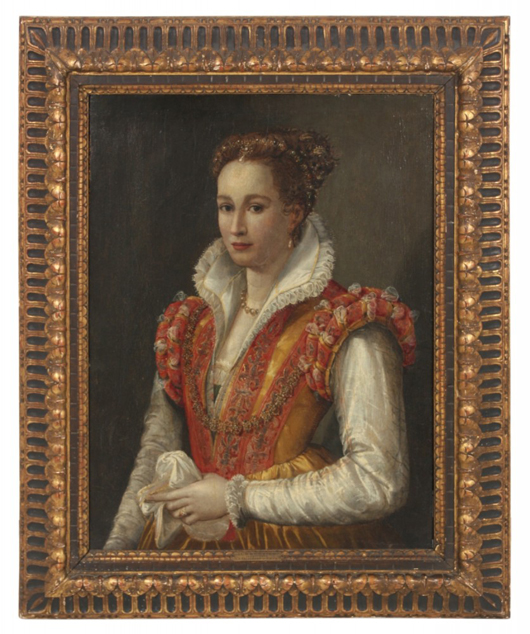 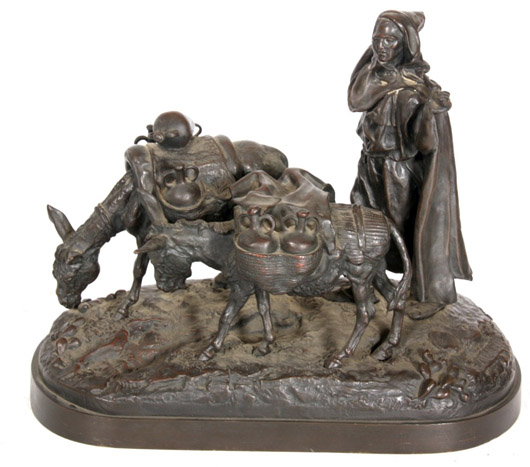 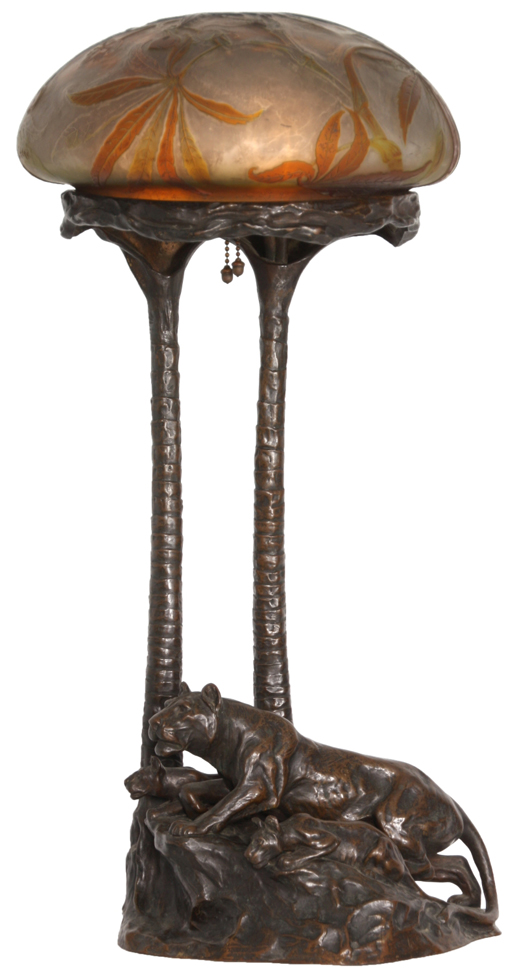