PITTSFIELD, Mass. – An E. Howard & Co. No. 68 floor standing astronomical regulator clock sold for $277,300 at an antique clock auction held Nov. 23 by Fontaine’s Auction Gallery. It was a new world auction record for an E. Howard clock, shattering the old mark set in November 2012 of $230,100, also at Fontaine’s.

The E. Howard No. 68 was the top lot in an auction that saw 370 rare and important clocks from several prominent collections come up for bid. Overall, the auction grossed more than $1 million.

“The best items in this auction went well beyond our expectations, with new clients participating at every level,” said John Fontaine, owner of Fontaine’s Auction Gallery. “Fine examples of rare clocks are at the highest selling point I can remember over the course of my 40 years in the industry.”

Of the top 10 earners, three were E. Howards, a testament to the Boston-based brand’s star power among bidders seeking only the finest in antique timepieces. In addition to the No. 68 model, a No. 25 drumhead astronomical regulator brought $94,400 and a No. 74 astronomical observatory regulator made $41,300.

But the No. 68 standing astronomical regulator was the undisputed champ of the sale. The 105-inch-tall carved walnut case with a figural maidens head crest and No. 2 gravity escapement movement was ordered from E. Howard & Co. on March 24, 1884. It was delivered to the great grandfather of the consignor in Stamford, Conn., on April 18, 1884. The clock was expected to do well, having been assigned a presale estimate of $100,000-$150,000.

Approximately 1,750 total bidders participated live in the gallery, by telephone, on the Internet and absentee.

Two clocks with magnificent cases attributed to the renowned 19th century American cabinet maker R.J. Horner both did well. The first was a nine-tube grandfather clock, 107 inches tall, in good original condition and with the original finish ($44,250). The brass weight-driven 8-day movement was by Bawo & Dotter, New York, and the case was heavily and beautifully carved.

The second was another grandfather clock that sold for $23,600. This one was 105 inches tall with quality brass movement strikes on five silvered tubes signed “Walter H. Durfee” and signed “Tiffany & Co.” on a silvered plaque. The clock, in good running condition, featured a silvered chapter ring with applied brass Arabic hour numbers, and a serpentine form case with broken arch crest.

Returning to the E. Howards, the No. 25 drumhead astronomical regulator that gaveled for $94,400 was 75 inches high and in excellent condition, with a cleaned and polished finish. The 14-inch silvered bronze astronomical dial had black incised five-minute numbers and was signed “E. Howard & Co., Makers, Boston.” The No. 25 case showed a round “drumhead” top.

An inlaid rosewood Vienna regulator in excellent condition and with the original finish – “the finest example of this clock we have ever seen,” Fontaine said – rose to $25,370. The 9 1/2-inch inset porcelain dial had black Roman hour numerals and was signed “Jacob Weber.” The gorgeous 73-inch rosewood case had a pierce-carved floral and filigree crest and corner finials. A French figural Three Graces annular clock with a white marble base having a fluted pedestal topped with an urn, with dore bronze handles and trim, 26 inches tall, with the original dore finish, realized $17,700. Standing around the urn were three nude female figures (the Three Graces). The 4 1/2-inch dial had two porcelain rings: one with Roman numerals, one with Arabic.

A Herschedes pattern 140 mahogany nine-tube grandfather clock, 106 inches tall, with blue pierced hands, silvered chapter ring with brass Arabic numerals and Westminster/Whittington sub-dials, went for $11,800. The clock, with a Graham deadbeat escapement and signed with the Herschedes trademark, had some case wear to the crest but the movement was in good condition.

A Kroeber No. 25 hanging pinwheel jeweler’s regulator in fine condition, with an enhanced and polished finish, found a new owner for $10,620. The clock, 98 inches tall, had a 12-inch porcelain dial with black Roman hour numerals, open moon hands, sweep second hand and a gilt brass bezel. The carved walnut No. 25 wall hanging case had a carved maiden’s head.

Rounding out just a handful of the day’s highlights was a mahogany and ormolu swinging portico clock, 22 inches tall, in good condition and with the original finish. It sold for $9,440. The dial was signed “Gittion a Paris” and the movement was signed “Bechot.” The mahogany portico-style case had turned tapered columns and the 3 1/2-inch dial featured black painted Roman numerals. 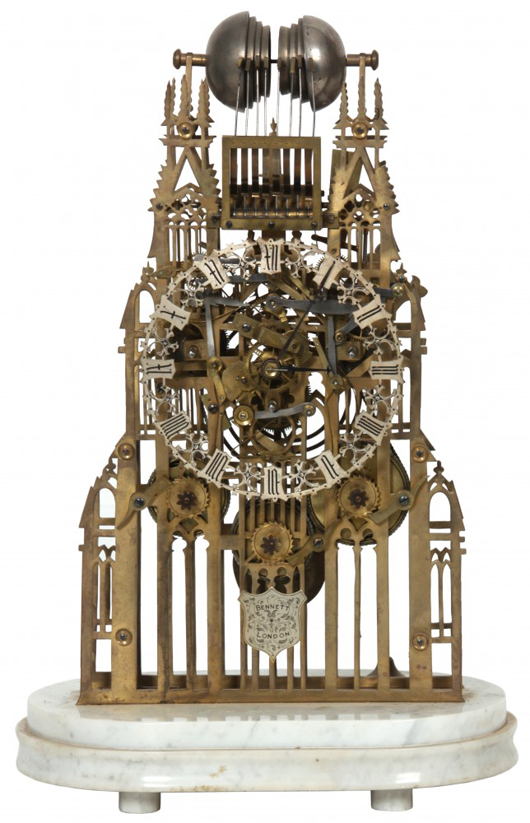 Continental statues of Cleopatra and Judith bring $132,250 at Fontaine’s